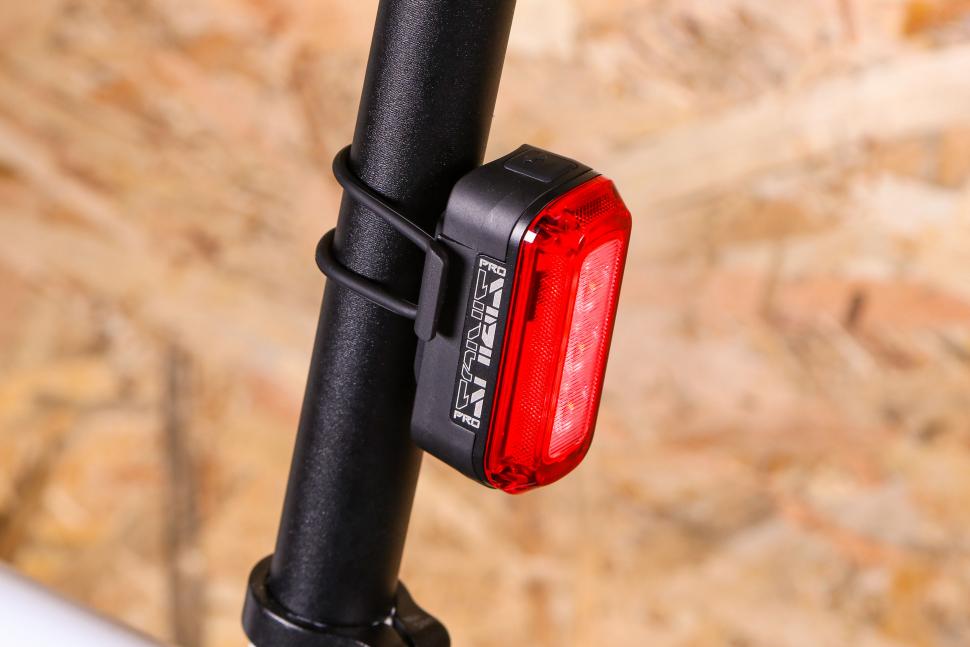 The Moon Sirius Pro 350 is a seriously bright rear light that's packed full of tech. Run-times are excellent and there's a huge range of modes for every condition, day or night. However, navigating them does take some time to learn – a thorough read of the manual is a must.

The Sirius Pro feels robust, with a CNC aluminium casing and 79g weight. The lens allows for 120-degree visibility and also has a reflector for when the light isn't turned on.

Its IPX7 water resistance means it can be submerged up to a metre for 30 minutes. Although that in itself isn't particularly useful, it does mean it should withstand many a soggy British winter without packing up. I've been using the light for about six weeks now in some pretty grim conditions and it's doing well so far.

Lots of new rear lights are boasting superbright daylight modes but there aren't many that can pump out a whopping 350 lumens. Unlike many daylight modes, this one will actually last the whole ride, too – 13 hours, in fact. That's loads more than the 2 hours on the Ravemen TR300 that I recently tested, although the superbright flashes on the Moon are slightly less frequent. Even so, in a busy urban environment I was confident that I was being noticed, and when it was strapped to the back of a mate's bike I was seriously impressed with how eye-catching the light was, even in bright sunlight.

Burn-times in other modes are impressive as well, but this is also where things start to get a bit more complicated...

Out of the box you can turn on the light with a single press. Fine. Next, you can choose the brightness with another single press, or switch to the flashing modes with a double press of the button, and once there you scroll through the flash modes, once again with a single press. To turn it off you simply press and hold for a few seconds.

All of that is fine; I just wish that Moon had stopped there because once you throw in 'Intelligent brightness' which changes all the modes depending on whether it's day or night, VLS (variable lumen system) to customise modes AND braking modes, for good measure, I was pretty stumped and had no idea what mode I was in for the first few weeks of testing.

I wouldn't class myself as a technophobe and have familiarised myself with countless lights, so I think it's a case of Moon simply cramming too much functionality into something that didn't really need it.

The standard modes and claimed run-times are as follows:

First up, I'll start with the useful ones...

The Sirius Pro has a lock – you press the button for five seconds and the light is inoperable until another five-second press. This is great for if you plan on chucking the light in a bag or travelling with it as it prevents accidental use.

It also has a memory function, which means it'll turn on in whatever mode you turned it off in, especially useful given the light's complicated nature.

Features I found less useful include the VLS (variable lumen system) that I mentioned earlier. This allows you to override the factory modes with your own brightness preference, so anything from 10-350 lumens for flash modes, and 10-80 lumens in solid modes. I would have been perfectly happy with a high, medium and low setting to avoid any potential confusion. I feel this feature is trying to fix something that isn't really a problem – for me, anyway.

Next up, the braking mode. Personally, I'm not a fan. I think that a light should get you noticed the whole time – car drivers aren't likely to associate the change with a decrease in speed, and I also don't like how braking modes reduce run-times.

That said, Moon's is one of the best lights I've seen with a braking mode; in daytime the light will brighten to 200 lumens, or 150 lumens at night. Both of these are REALLY bright and stand the best chance of being associated with decelerating rather than manic flashing like some other lights.

However, on some group night rides I found that I was repeatedly blinding my compatriots with every deceleration. This shouldn't have been the case because, in group ride mode (6 lumens), the light should only brighten to 20 lumens under braking. I don't know whether the lights behind were tricking the Sirius into thinking it was daytime and turning group ride mode off, or what, but it was less than ideal.

On a more positive note, the parking mode, where the light dims after 20 seconds of no movement and turns off after 40 seconds, worked well and is a good way of saving battery at the café; just make sure you turn off the light properly when you get home as leaving it on standby will drain the battery.

A further feature that most lights do not yet have is USB-C charging; this appears to be the future and for many people will mean they can use the same charger lead as their phone. Despite using the newer connector, charging is still limited to the standard 5V which enables the light to be charged in about 3.5 hours, not bad considering how long the burn-times are, but it also feels like a missed opportunity.

In the box you'll find two rubber pads for the back of the light, one for seatposts with an aero trailing edge and another for round posts. On my Specialized Venge with kamm tail style seatpost, I found that the standard round pad worked well, and the light was held securely on both this bike and standard round seatposts.

The rubber O-rings for mounting the light are a simple solution but work well, and a few different lengths mean that seatposts from 20mm to 52mm can be accommodated.

At £55 the Sirius Pro sits at the premium end of the rear light market, but it does have the stats to back it up. The Moon's run-times are superior to the cheaper Ravemen TR300 (£49.99) that I mentioned earlier, although that is easier to use.

Compared with the Exposure TraceR with ReAKT and Peloton (£65) it delivers a fair bit more firepower, but this does come at the cost of a bulkier unit.

Or for the same RRP, there's the no-nonsense Knog Blinder R70 which lacks nearly all of the clever features and has worse run-times, but would still be high up my list for just getting the job done.

Overall, the Sirius Pro 350 has all the hardware you could possibly ask for, a massive 350-lumen max output, great run-times, USB-C port, high-quality casing with IPX7 rating, and a simple yet effective mounting method. The light begins to come unstuck when it comes to software: for me, Moon has just tried to cram too many features into it, which, instead of adding usability, detracts from the overall function.

If you're prepared to revise the manual (there's a link here), this could be a great light, but for any technophobe or someone who wants a mount-and-ride light, it probably isn't the one for you.

Superbright and high quality rear light but also rather complicated

Moon says that the Sirius Pro 350 is its "most intelligent rear bicycle light with no fewer than five different modes boasting automatic brightness and motion-sensing functions, you'll be amazed at what this light can do! Suitable for riding both on and off-road, once you've tried the Sirius, going back to a regular rear light simply won't be an option."

The light is superbright, so ideal for daytime riding, but the modes are extremely complicated to use and navigate, meaning that the light is best suited to someone who is tech savvy and willing to put the time in to learning.

So many functions and only one button...

Simple and easy to use, held the light tightly with no movement, and the extra tabs on the "wings" aid security.

Braking mode will reduce burn times depending on use; recharging is fairly average.

Fairly average for a rear light but run-times are excellent considering this.

IPX7 rating means it should last a while and it feels well built, but it's not cheap. It does have a lot of features, but I could do without most of them.

For solo riding it worked well, once you work it out. It's bright and the button is easy to use when on the bike. For group rides, I found the braking function annoying and it was hard to tell which mode the light was in.

How complicated it is to use.

As mentioned in the review, it is expensive but it doesn't stack up too badly in the premium rear light market thanks to the higher lumen count and longer run-times than its competition. However, many of those other lights are easier to use...

Did you enjoy using the light? At times.

Would you recommend the light to a friend? A few.

I think it's a good light that could be very good: the excellent run-times and visibility are undeniable. Its IPX7 rating should mean that it lasts a while, and the braking feature is also very good (if you like that kind of thing) for solo riding. Some of the features are genuinely useful, but there's an overwhelming sense of over-complexity, fixing issues that aren't really issues at all.