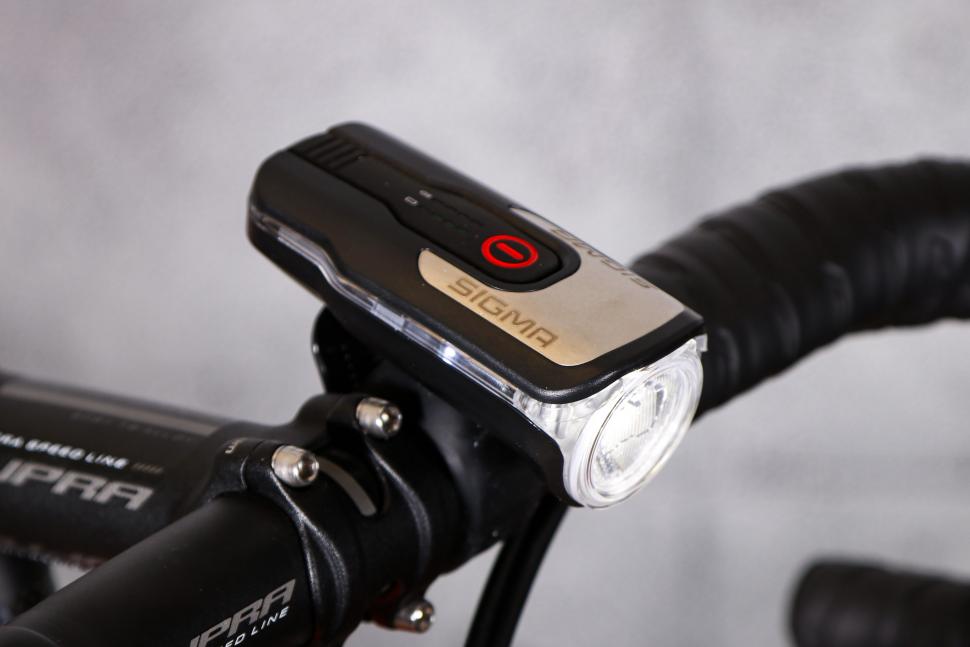 7
10
Effective, simple and gets the job done day or night – for unchallenging roads, at least
Simple but effective
Penetrates a good distance
Useful run-times
Not that bright
Narrow beam
No flashing modes
Weight:
121g
Contact:
www.oxfordproducts.com
How we test

The Sigma Aura 80 is a basic yet effective light that copes with even completely unlit roads, and it's very easy to live with. It's great for commutes and training rides on good roads, but gets out of its depth on twisty lanes or dodgy surfaces.

While many lights use lumens – basically the total 'amount' of light emitted – to indicate brightness, some use lux. Lux measures the intensity of light falling on a surface: one lux is equal to one lumen per square metre.

Sigma claims 80 lux for this, which is actually quite high. My totally unscientific comparison showed the brightest part is roughly equivalent to 1,500 lumens at 2 metres, which is enough for unlit lanes.

The thing with lux is, you can get intensity from a low output just by focusing it tightly, and that's what the Sigma does. Consequently, the very bright beam is limited to a narrow, pill-shaped area that ideally skims above the road surface to give you your distant vision. An actual 1,500-lumen light, meanwhile, will throw that brightness everywhere.

The Aura 80 chucks an additional rectangle of light below and to the sides of the pill-shaped centre, but this proves barely equivalent – again, in my dedicated Unscience Lab – to a 25-lumen beam at 2m. It's this that lights the nearby road surface and verges, and while it's bright enough to do so reasonably well, it's not exactly spectacular.

Once you've angled it correctly, the Aura basically throws a slightly dim beam a surprisingly long way; the intensity of the pill-shaped central patch falls to match the rest because it's going so far.

The result is mostly fine. On the upside, I felt happy at 25-30mph on big, sweeping roads I know well, even in totally unlit locations. It feels borderline should there be a surprise bit of debris in the road, though, and on one section with very sunken drains I had to give everything a very wide berth, as I couldn't properly make out what I knew was there.

Yes, you can angle the lamp further down, but that tightly focused centre just creates a bright letterbox on the road that's not much use, and the dark lines between it and the rest are distracting. You also lose the necessary distance for speed.

Further on the downside, the limited spread to the sides means there's little in your peripheral vision, and tight corners are a journey into the unknown. It's bad enough even to make roads you know tricky, let alone ones you don't. It's not for technical descents.

Angled just right, the Aura 80 is a decent lamp for main roads and smaller ones you know well, and it copes with poor surfaces and towpath-type offroad well. I wouldn't want to go on anything rougher or techier than that with it, though.

At 60 and 40 lux, the Mid and Low modes are useful for extending daytime run-times and still get you seen in all but bright sun or hectic winter rush hours, but unfortunately the already-dim broad surround only gets dimmer still. At night I could barely tell the difference between these two; the steps to lowest and highest powers are much more noticeable.

On full power and unlit roads I noticed some drivers dipping their lights, and some hesitating on the throttle – whether they found it blinding or were simply confused about what was coming, I don't know. Nobody flashed me to complain, anyway.

In the 20-lumen Eco mode, the whole thing is so dim you can (almost... ow) look straight into it, and you'd be better off with any number of tiny, cheap commuter lights. It's not a setting for anything other than emergencies.

The build feels strong, simple yet well thought out. The substantial silicone strap is easy to hook on, and there's a grippy pad under the 'foot' that keeps it secure. It doesn't move (at least once you've adjusted out any uneven stretch that drags it round), despite being quite heavy at 121g and rather bulky with it. 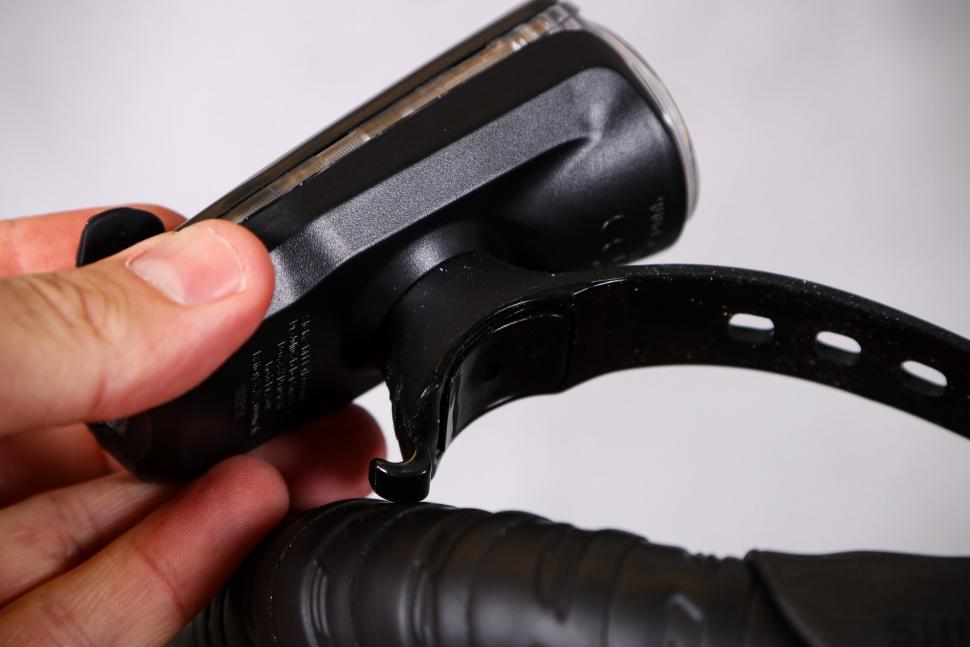 The micro-USB charging port gets the usual bung, and the same strip of silicone extends to protect the single large button. The unit's rated to IPX4 – splash resistant, basically – but had no problem with persistent rain during the test. 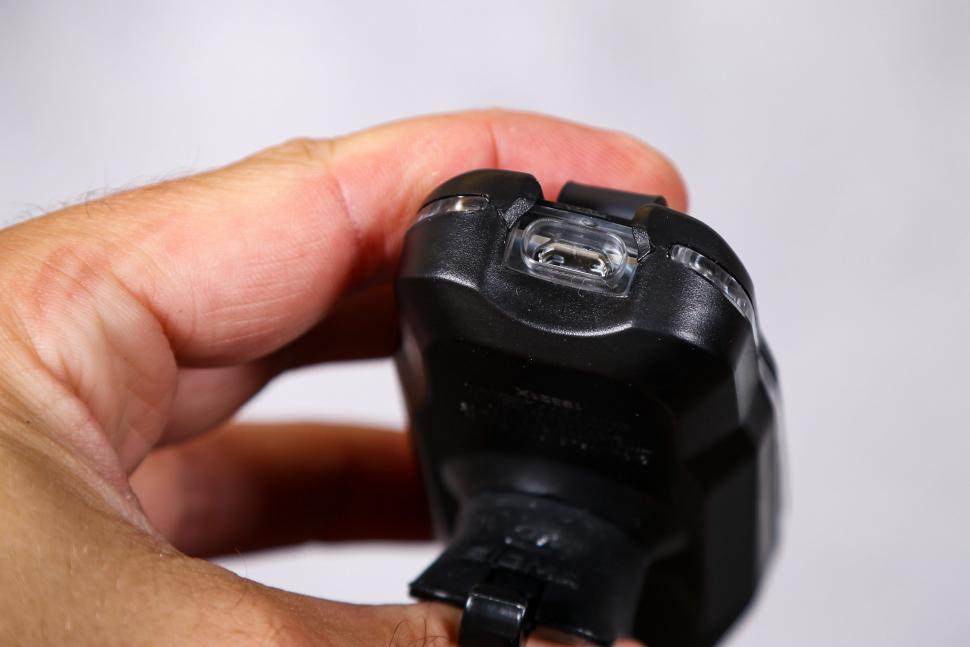 The large round lens is great for getting you noticed, and I particularly like the large 'light pipes' running right down the sides and even round the back. Obviously they get much dimmer as you go back – and on a road bike they're often obscured by your arms – but it's a nice feature. Especially for flat-barred bikes. 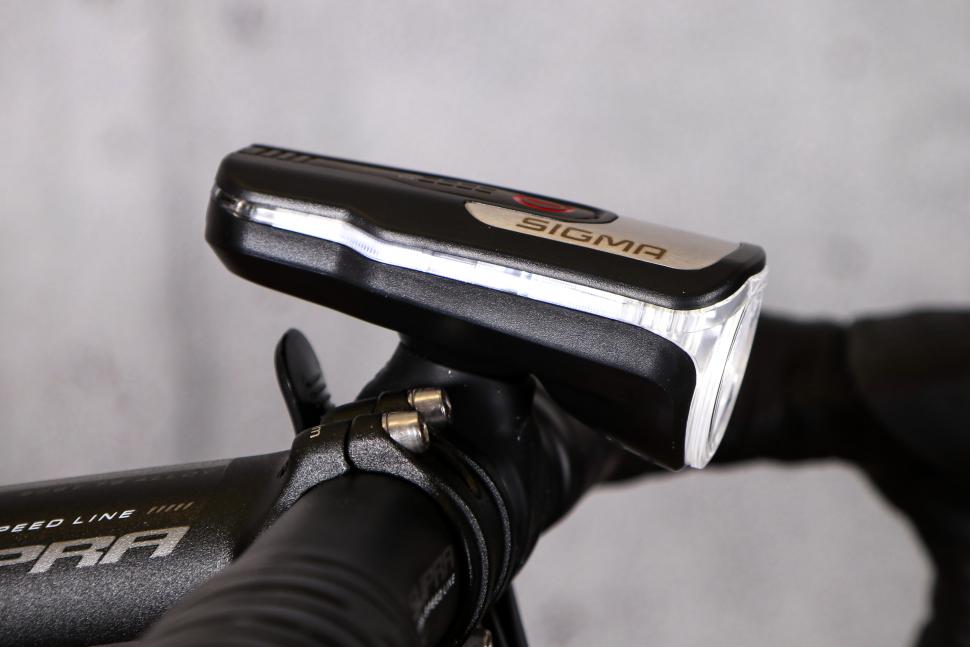 The double-tap-for-on feature is also good, especially if you're shoving this, with its big and easy button, into bags. You're unlikely to flatten the battery by accident. I also really like the big, clear, four-element indicators for mode and battery level. You always know where you are with this (so long as you're not at speed on a dark corner, anyway...), but with only four brightness settings and no flash modes, it's not that complicated in the first place.

It always starts at full power as there's no mode memory, but as there are only four to cycle through it's not a big deal.

The claimed run-times – 4hrs, 5hrs and 6.5hrs for the main modes, and 15hrs for Eco – seem accurate, as does the rather long 4.5hr charging time (it really takes 5mins longer, but I'm very forgiving).

In full power it actually lasted 4hrs 15mins before the red warning light came on, then spent another hour on low power before finally going dark. For the final 15-20 minutes, the red light flashes as extra warning. You really shouldn't get caught out with this light.

The £59.99 tag seems reasonable for its build and performance. The Kryptonite Incite X6 USB to See is similar at £64.99, but given that it's heavier still at 163g, its clamp is poor, and it's 60 lux maximum, the Sigma has it beaten.

Something like the Gemini Atlas 500 Front Light, though, is also good in full darkness, weighs less at 86g and is cheaper at £49.99. On the downside, it only manages 1.5hrs on full 500-lumen blast.

The Aura 80 is well made, effective and user-friendly. It's ideal for commuting and gets the job done for training rides on big, fast or well-known roads, but the beam's not powerful or well shaped enough for anything but cautious attempts at sketchy back lanes or techy descents.

Effective, simple and gets the job done day or night – for unchallenging roads, at least

Sigma says: "The AURA 80 USB is the new top model of the AURA series and attracts with a strong light range of over 90 meters. As a result, the front light is a safe companion even far removed from paved roads.

"Thanks to its integrated battery charge and light mode indicator, the rider always has the remaining battery level and the set light modes in view. This makes the AURA 80 USB a first-class companion for ambitious riders."

* Splash resistant in accordance with IPX4

* Light Guide for excellent side visibility

Well built to a neat design.

Very simple, though no mode memory.

IPX4 splash resistance has no issues with rain.

Lasts very well, and though 4.5hr charge is lengthy it's easy to top up as you go.

Very well, though some might miss having any flashing modes for day or city use.

The £59.99 tag seems reasonable for its build and performance. The Kryptonite Incite X6 USB to See is similar at £64.99, but given that it's heavier still at 163g, its clamp is poor and it's 60 lux maximum, the Sigma has it beaten.

This gets the job done with no fuss and at a decent price. It's not up to serious night use on tricky roads, but lights that are tend to cost far more – this is good at what you can reasonably expect it to be good at.