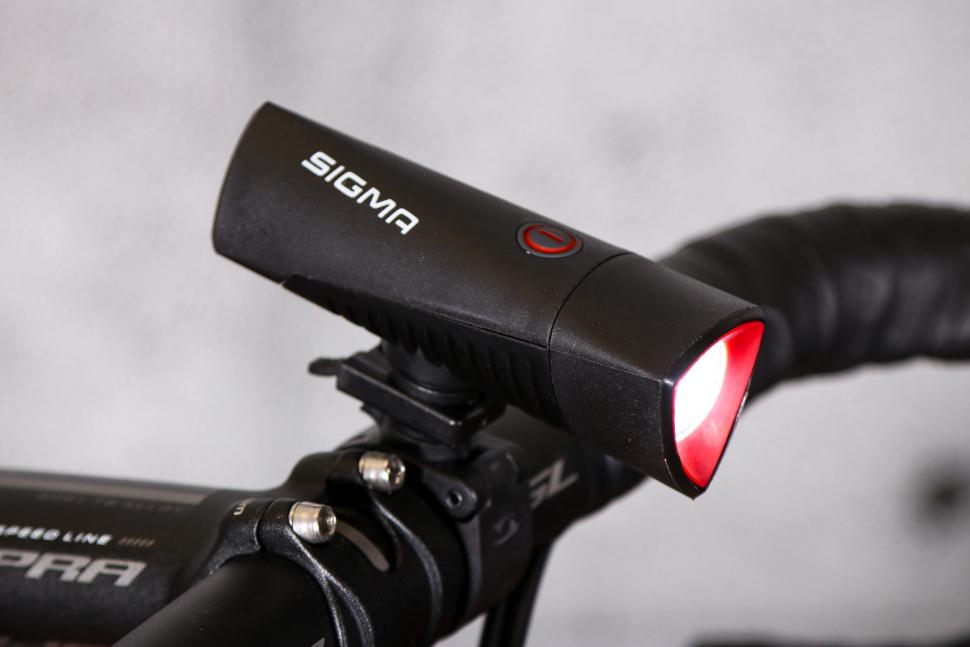 7
10
Well made and makes the most of its output, but struggles on value
No need to scroll through flashing mode
Helmet mount included
Decent run time
Secure mount
Basic single LED beam
Not that quick to charge
Weight:
135g
Contact:
www.oxfordproducts.com
How we test

Considering its small size, the Sigma Buster 700 Headlight pumps out some decent lumens and a useful battery life, plus it avoids that stupid thing where you have to scroll through the flashing mode to get back to full power. The beam pattern is quite basic, but it is good to see a helmet mount included in the box.

The Buster 700 is a compact unit featuring a single Cree LED which puts out a focused, spot-like beam similar to a torch, rather than a T-shaped beam (with a central spot) such as found on the recently-tested Ravemen CR800.

I really liked the CR800, mostly thanks to its cut-off beam – it stops it wasting the majority of its light in the treetops. Angle the Sigma down though, and it's not too much of a problem.

There is some spread around the outside of the spot which does allow you to pick up the verge and potholes, but not in such a definitive way as some other lights on the market.

You get three solid modes: a 700 lumen, a 375 lumen and an Eco, which is 170 lumen. The burntimes are 2hrs, 4hrs and 8hrs respectively. Not bad considering the smallish battery.

The power button doubles as the battery indicator. No back lighting means you're above 71% charge, green means 70-31%, and red means less than 30%. Burntimes turned out to be within 5% after the third charging cycle, even when the temperature was below freezing.

The Buster is capable of lighting dark country lanes comfortably at speeds around 20-25mph on full power, and you can still move at a fair old lick on the 375 lumen setting, especially if you know the roads.

Given the burntimes you can get a decent training ride in, especially if you are using wider main roads with cats eyes and white lines marking the edges. Here the 375 lumen setting is ample with good visibility (no sharp corners or technical descents).

Like most lights you move down through the modes via the power button; high, mid, low and flash. The cool thing is – and I really don't understand why more brands can't do this – that if you're in mid or low mode, a double tap will take you back to high without subjecting you to a disco frenzy on a dark lane as you pass through flash. 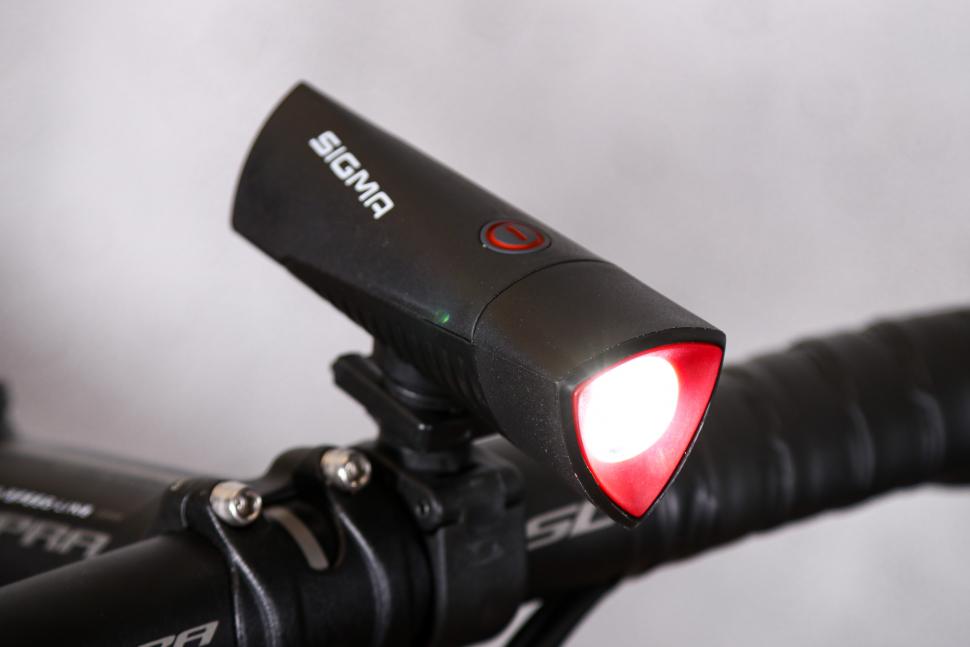 It can also be charged from a power bank while you're using it, letting you usefully boost runtimes, and it takes a double click to fire the light up – that cuts down on accidental power-ons in a rucksack. There is no mode memory, but that is not a major issue.

Flash mode is bright at the full 700 lumen – maybe a touch too bright for urban night use unless there's a lot of light clutter already – and it'll certainly get you noticed. It works well as a daytime running light, too.

The Sigma has a rating of IPX4 for weatherproofing, which means it can cope with water splashes from any direction. I had no issues even in heavy rain, or even while giving it the shower test in the bathroom. Just make sure the rubber cover is securely closed over the charging point. 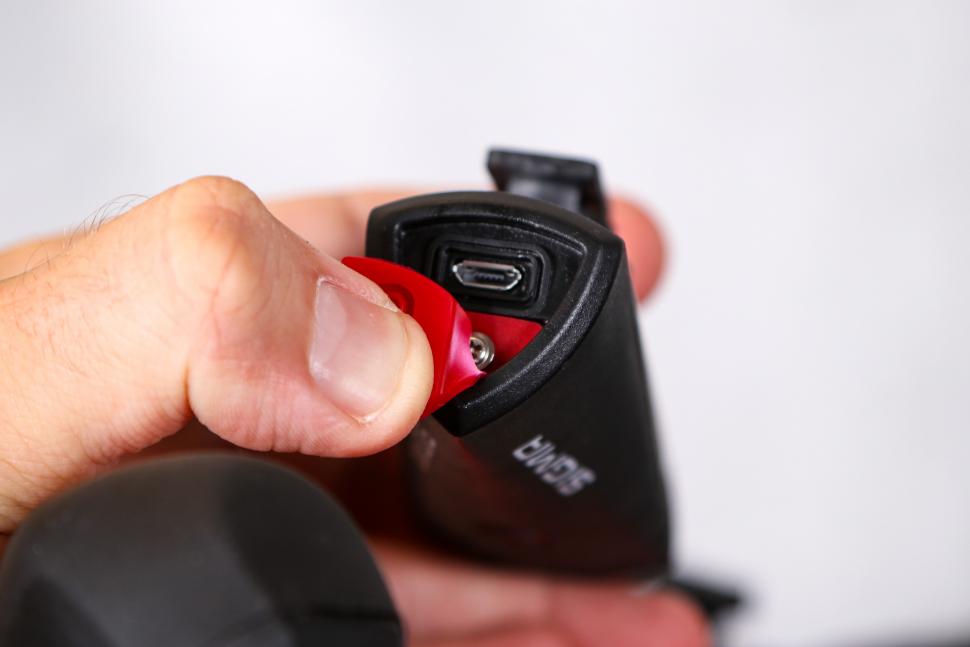 Speaking of charging, it takes around 4.5hrs. Not that quick for such a small unit, but easily doable during the working day.

Mounting is via the handlebar mount and a helmet offering. The handlebar mount works for 25.4mm to 31.8mm bars, and the thumbscrew design means it is secure and doesn't vibrate around on rough roads. If you want a quick release, you can get a silicone band as an extra.

The helmet mount uses a Velcro strap through your helmet's vents. It's pretty versatile and its rubber construction will mould to a range of helmet shapes. On my night-time gravel rides I found the Sigma a capable helmet light, giving precise illumination as you are going into bends. Its weight means it's barely noticeable too.

The quality doesn't disappoint. The aluminium alloy body is robust and highly resistant to scrapes from crashes (yes, I decked it on the gravel bike...) or being dropped. The button also has a solid feel to it, and is easy to activate with gloves on.

Since we first reviewed this light in 2019 the price has jumped considerably, from £61.99 to £79.99. That puts the Buster in amongst some very tough competition.

The 800 lumen Ravemen I mentioned earlier is just £64.99, and it's brighter with a better beam pattern. It does have that annoying scroll-through-flash-mode thing, though.

Moon's Meteor Vortex Pro 1300 is the same price as the Sigma, but as you can no doubt guess kicks out a huge 1,300 lumens on full power (for an impressive 1.5 hrs), or 1,000 lumen for 2.5hrs. It also has a VLS mode for tweaking the output to anywhere in the range, and it is weatherproof up to IPX7.

The Meteor isn't perfect, though. You have to scroll through flashing mode here too, and the bar mount can slip on rough roads. The beam pattern is also similar to the Sigma.

With lights it is not all about power, it's about what they do with that power. The beam pattern of the Sigma is simplistic, but it does chuck a lot of light down the road and the burntimes are decent. The main/dipped beam idea is a bonus, but it does struggle on price against some very powerful opposition.

Well made and makes the most of its output, but struggles on value

Sigma says, "A whopping 700 lumens and 100 metres of visibility make the BUSTER 700 a reliable partner for your trips through the night. Using the integrated slider the BUSTER 700 can be pushed onto the helmet holder and removed easily."

It's a good light that is well made. The biggest bonus is the fact you don't have to scroll through flashing mode.

Able to be charged during use

Splash resistant in accordance with IPX4

Better than I was expecting for IPX4.

It's good quality light, reliable and simple to use.

It's a well made unit.

The spotlight beam wastes a lot of light upwards.

It's pricey, to be honest. The Ravemen mentioned in the review is considerably cheaper and has a quality beam, while the Moon chucks out nearly twice the power for the same money. The Sigma does have the bonus of not having to scroll through flash mode, though.

Would you consider buying the light? Ummmmm......not at full price, due to the tough competition

All things considered the Sigma is a good quality light; well made and intuitive to use. It's up against some tough opposition, though, given its output and price.

Well-made, sleek and robust be-seen light – but it costs more than some night-time riding lights