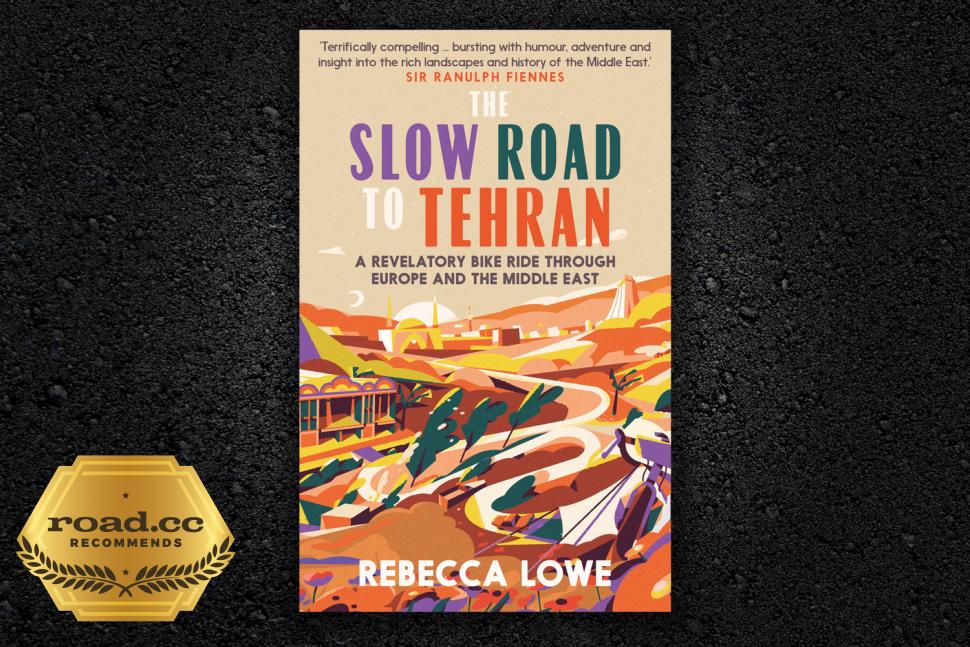 The Slow Road to Tehran: A Revelatory Bike Ride Through Europe and the Middle East

9
10
An enjoyable way to understand more about the Middle East, and why its people are so often in the news
Not your usual travelogue
Engaging writing
Small pictures
Weight:
620g
Contact:
septemberpublishing.org

You will have heard the phrase 'achieving peace in the Middle East', often an analogy for an intractable problem. Anyone reading Rebecca Lowe's The Slow Road to Tehran will have a better understanding of the challenges in the area, although they may not be any closer to realising that peace. Lowe also confirms what we all know: travelling by bike allows you to get closer to a country and its people, and then she puts her skill as a writer to good use as she draws us in to her adventure.

I first came across Lowe's work in a cycling magazine where her monthly updates on this journey were one of the few highlights. I then heard her talking at the recent Cycle Show, and discovered that there is now a book as well.

On stage, Lowe explained that she hadn't intended to write a regular travelogue, which meant she didn't approach the ride with that perspective; instead, her background as a journalist had made her realise there was another story that she could tell.

It all started when she cycled to Tripoli the previous year to help her better understand an area that she was reporting on for work. She discovered that travelling by bike was a great way to 'peel back the layers of artifice and prejudice to unearth the human stories underneath'.

It's a good decision: there is no shortage of travelogues out there, which makes it difficult to offer anything different. Even taking it to the extreme and cycling around the world is almost routine now, and there are many good books to prove it – with Mark Beaumont being one of the better-known practitioners.

Equally, by not relying on slapstick comedy and contrived jeopardy, she avoids another well-served category, surely epitomised by Tim Moore's output. Actually, there is a little bit of that – not having a bike, she persuades Kona to donate one, but it doesn't arrive until the day before her departure. Furthermore, she insists on travelling with a ukulele – so the stage is set for a certain amount of farce.

Lowe does encounter many of the issues that you might expect: inopportune punctures, a sore arse, unreliable access to water, insalubrious accommodation, sexual advances, difficult border crossings, and language misunderstandings. She also enjoys many of the things that seem to be a feature of such journeys – friendly people, free hospitality, and beautiful scenery.

The fact that she used a bike is not the most important part of the book – yet at the same time she could not have achieved such a journey by any other means. As a result, this book won't be much help in undertaking such a trip yourself. Although it contains a lot more information than most travelogues, the focus is on an area of the world that is frequently misrepresented, not on 'the pros and cons of an internal gear hub'.

Despite the educational angle, Lowe does a good job of conveying it in an engaging manner, so it never feels like you are back at school.

She necessarily mentions lots of 'trigger words' which, based on most news reports, would normally give rise to prejudice, even fear: Syria, Lebanon, Beirut, Islam, jihadist, ISIS, Iran – in fact, almost anything to do with the region. She wanted to travel in those countries and meet normal people who could help her discover the real stories behind the headlines – then she could do her bit to counter the misunderstanding that surrounds the area.

There are numerous explanatory footnotes, and an extensive bibliography – which reassures you that Lowe has taken her research seriously. It includes the late Dervla Murphy's seminal work, Full Tilt, which in many ways is from the same genre.

Even without being on the journey, I joined Lowe in viewing 'my homeland with newfound appreciation' once she was back home; just knowing that (relatively speaking) we can do things 'without fear of judgement, abuse or arrest' is something that it is easy for us to take for granted.

My knowledge of the Middle East has improved a lot as a result of this book, which I suspect will be the same for most people, which I didn't expect but did welcome. While it may not be a regular holiday destination for most people, it is clear that there are many areas where adventurous types could have a great experience – despite everything that we hear.

An enjoyable way to understand more about the Middle East, and why its people are so often in the news

Make and model: The Slow Road to Tehran: A Revelatory Bike Ride Through Europe and the Middle East

2015, as the Syrian War raged and the refugee crisis reached its peak, Rebecca Lowe set off on her bicycle across the Middle East. Driven by a desire to learn more about this troubled region and its relationship with the West, Lowe's 11,000-kilometre route took her through Europe to Turkey, Lebanon, Jordan, Egypt, Sudan, the Gulf and finally to Iran.

It was an odyssey through landscapes and history that captured her heart, but also a deeply challenging cycle across mountains, deserts and repressive police states that nearly defeated her. Plagued by punctures and battling temperatures ranging from -6 to 48˚C, Lowe was rescued frequently, by farmers and refugees, villagers and urbanites alike, and relied almost entirely on the kindness and hospitality of locals to complete this living portrait of the modern Middle East.

The Slow Road to Tehran is her evocative, deeply researched and often very funny account of her journey – and the people, politics and culture she encountered.

Title: The Slow Road to Tehran

It is a bit different to most other cycling travelogues.

Pictures a bit disappointing: neither big nor plentiful.

This is up there with the best of the cycling travelogues available: easy to read, with enough action to hold your attention. Has the added bonus of including more modern history and exploration of cultures than is usual for the genre. It's excellent.

Subscribe
The Slow Road to Tehran: A Revelatory Bike Ride Through Europe and the Middle East
Rebecca Lowe

The Dot by Lachlan Morton

Often fascinating record of an incredible achievement, if a little slim