First look: Does the Praxis Works Alba 48/32 herald the era of the sub-compact chainset?

Smaller chainrings mean lower gears — is this the way to go for riders who don't race?
by John Stevenson

With this version of its Alba chainset, Praxis Works is in the vanguard of a new trend in gearing, the sub-compact chainset. What’s the idea, and is it the way to go for you?

The chainrings are the feature that separates this version of Praxis’ Alba chainset from similar-looking five arm chainsets. They’re a 48-tooth outer and 32-tooth inner for a slight drop in gearing over more common set-ups.

The bike industry is variously calling this ‘sub-compact’ or ‘adventure’ gearing because it takes the existing idea of the compact chainset a step further, yielding gearing that’s ideal for bikes used across a range of surfaces and terrains. (Praxis calls it ‘Micro-Compact’ which I think is over-egging things a shade.) 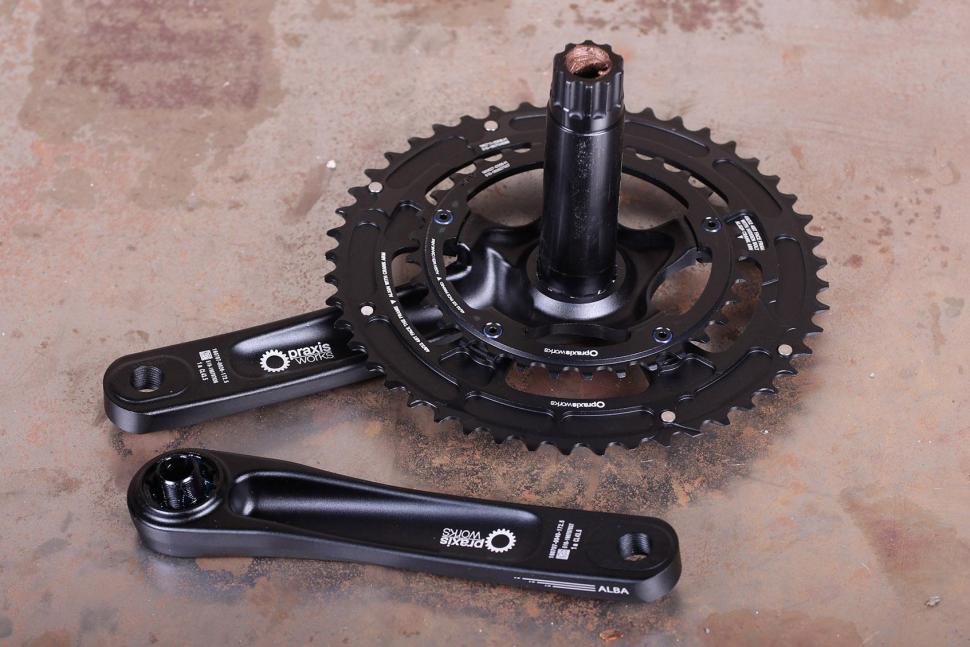 For over a decade the compact chainset has been the most common gearing set-up for road bikes that aren’t specifically intended for racing. The concept shot to fame in 2003 when Tyler Hamilton used a bike with 50/34 chainrings in the Tour de France.

Hamilton had broken his collar bone and couldn’t pull on the bars to push a high gear. Sponsor FSA supplied him with a chainset that gave him lower gears so he could spin up the hills. He went on to win a stage and finish in fourth place overall.

The dark side of what should be one of cycle sport’s greatest stories of heroism and willpower triumphing over pain is that Hamilton’s career ended in ignominy after a string of positive doping tests. In the 2012 book he wrote with Daniel Coyle, Hamilton admitted to having received a blood transfusion the night before his stage victory. (That book, The Secret Race, is a truly hair-raising tale of the ambition-fuelled doping insanity of pro racing, and deserves a place on your bookshelf.)

Hamilton’s sins aside, his use of a compact chainset legitimised the idea in the eyes of enthusiast riders who didn’t have the power to easily climb hills in the standard racing combination of 53/39 chainrings.

Since then, your options in gearing have widened even further. The advent of 10- and then 11-sprocket cassettes means you can get close ratios and a wide gear range without going to a chainring as small as 34, and that’s led to the compromise between race gearing and compact, the ‘semi-compact’ 52/36.

And now there’s yet another option: sub-compact, with chainrings that are two or four teeth smaller than a compact.

Why? Well, for starters, gravel/adventure bikes. Dirt roads can be long and steep, so it’s a good idea to have lower gears than are possible with a compact. For its Sequoia adventure bikes, Specialized is using FSA chainsets with the same 48/32 combination as this Praxis set, and we think we’ll see more of this in future.

There’s another thing, though. For general road riding, the gears afforded by these chainsets make a lot of sense. There’s been a trend in the last couple of decades to higher and higher top gears on road bikes. A pro-level road race bike that would once have had a 52x13 top gear now has 53x11, a whopping 20 percent higher.

Mark Cavendish might have use for a gear that high when he’s diving for the line on the Champs Elysees, but you and me? Probably not. Even when you’re descending, the extra speed you can add by pedalling a big gear is very small; you’re better off concentrating on getting into as deep a tuck as possible.

Sub-compacts come with either 48/32 chainrings or 46/30. A 46x11 top gear is still higher than that old-school 52x13. What would you rather have, a top gear that you can only really use once in a blue moon, or some lower gears to get you comfortably up an unexpected 20% grade?

If the latter, there are three obvious ways a chainset maker can accommodate you. The old-school answer is a triple chainset, but they’re hopelessly unhip and few shifting systems now work with them; you can’t get a triple-capable left hand shifter above Tiagra in Shimano’s range, for example.

Or you could have two bolt circles, as Sugino has done for a while with its OX cranks. These have a 110mm outer chainring bolt circle and a 74mm inner for a huge range of possible combinations down to 40/24. FSA has taken a related approach with its various Adventure cranks. The Tempo has a 110/80 five-arm spider; the SL-K Modular crank has an outer ring that mounts on the crank and an inner with an asymmetrical 90mm four-bolt circle; and the Omega Adventure has 120mm and 90mm four-bolt circles.

Fans of the quaint, old-fashioned notion of standards will be grinding their teeth at the introduction of yet more chainring attachment patterns to the already excessive number that bike shops have to try and handle.

For this five-bolt crank and its 110mm spider Praxis has come up with a clever fourth way: dispense with the chainring nut and screw the bolt straight into the inner ring. That provides the necessary couple of millimetres of extra space needed for a 32-tooth ring. 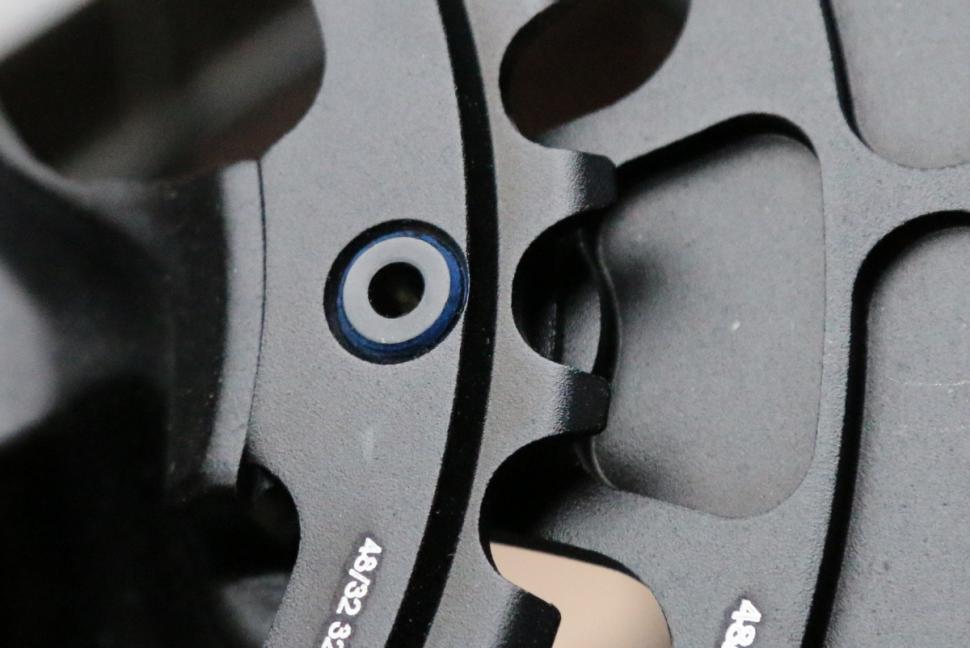 The chainring bolts screw directly into the inner ring. A conventional chainring nut in this location would overlap the teeth.

The hole in the inner ring is very close to the bottom of a trough between teeth, though, so you can’t go smaller with this trick. And you probably can’t just put the Praxis rings on a 110mm five-arm chainset that you happen to have spare. To make room for the chain on the 32-tooth ring, Praxis has machined a shoulder into the arm of the crank; without it, the chain will almost certainly hit the spider arm and skip.

The lighter, hollow-forged Praxis Zayante chainset also has the cutaway crank spider ends, so you can use the 48/32 rings with those cranks too.

You also get Praxis’ intricately-shaped outer chainring. Praxis claims to be the only manufacturer beside Shimano to cold-forge its outer rings. The advantage of that, according to Rory Hitchens of Praxis importer Upgrade bikes is that “shift accuracy can be detailed into every ring combination for better than great shifting.” 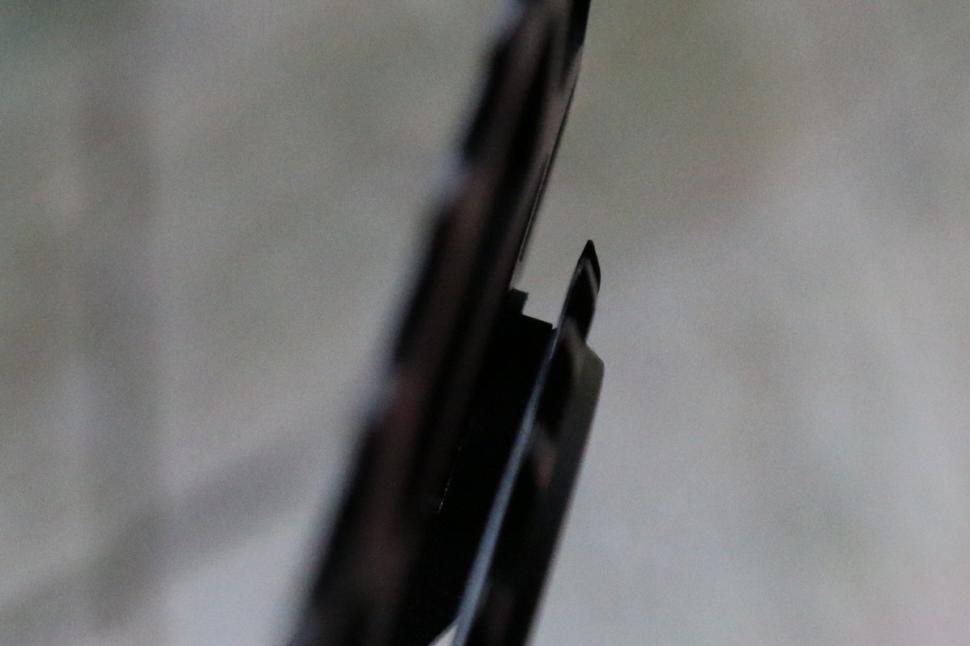 The end of the crank spider is stepped to make room for the chain to sit on the inner ring.

Is it all worth it or would Praxis be better off going for a whole new chainring bolt pattern? For a chainset maker, the big advantage of this approach is they’ve not had to create loads of new tooling. If the idea doesn’t take off, well, the Alba crank will work just fine as a regular compact.

Compatibility is important too. Rory told us: “I would say it’s for better industry compatibility at this time. 110 ring sets are more available in the Praxis range right now.

“If you look at the other 2-D forged crank from Praxis, the Cadet MTB crank, you will see that is SRAM style direct mount for the rings. I would not be surprised if Praxis looked at this system going forward for Alba as you would then have a choice of a single direct ring — very clean — or a direct mounted spider for a 2x set up with the choice to make different BCD options at lower cost.” There’s that cost consideration we mentioned.

The Alba costs £150 for the cranks and chainrings, which includes the beefy-looking 30mm hollow aluminium axle built into the right hand crank. You’ll also need a pair of Praxis M30 bottom bracket cups, which are £34.99 for threaded units or £64.99 for BB30 press-fit.

It’s going on my gravel bike shortly, and I’ll report back in a few weeks on how it all works