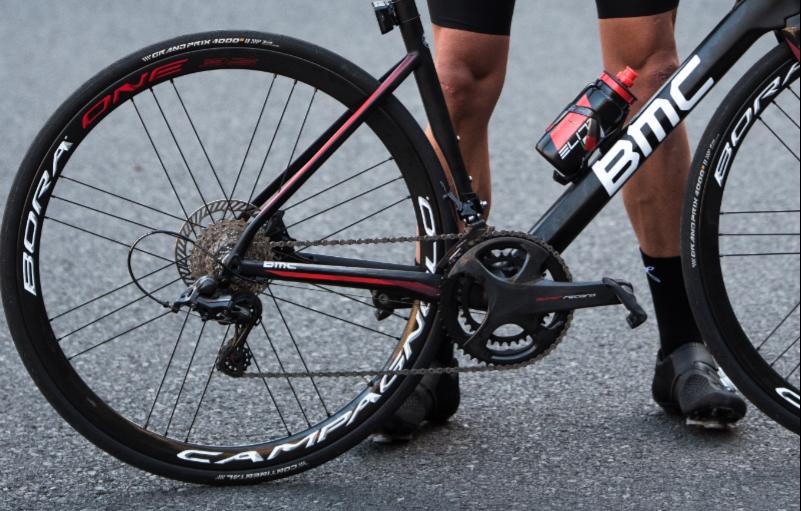 As Campagnolo becomes the first to go 12 speed for road, here's our first ride report of the new groupsets from the launch in Gran Canaria a fortnight ago...
by Jack Sexty

Having been the first to turn their amps (or cranks?) up to 11 back in 2008, Campagnolo have now decided we deserve two dozen ways to change gear. 12 speed is here, and I was lucky enough to go and check it out in Gran Canaria for a first ride. You can read all about the info and tech specs by clicking the link below. 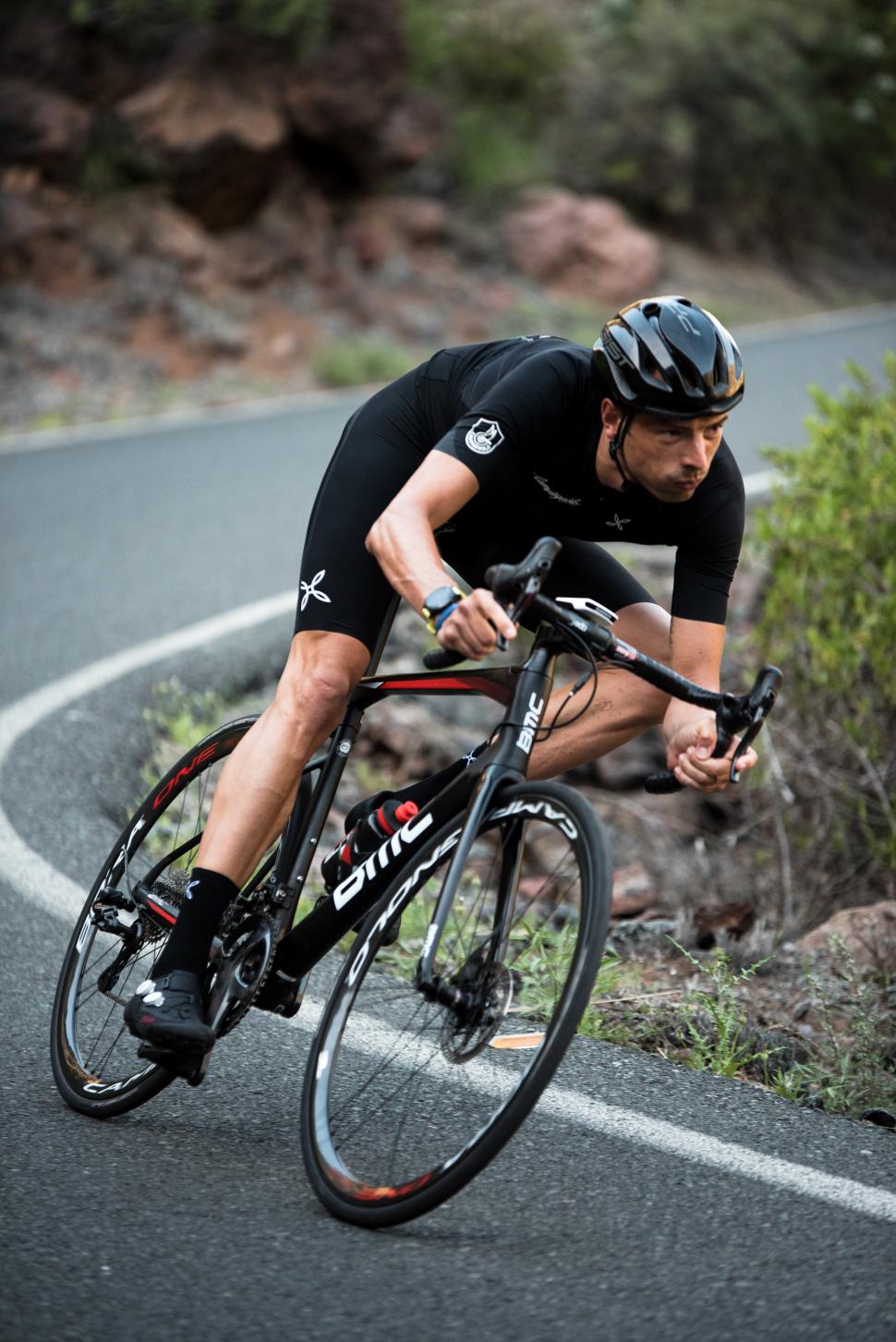 Across Gran Canaria's rugged volcanic terrain are plenty of smooth roads (and some not so smooth) with some punishing climbs and thrilling descents that provided me with plenty of opportunities to test out the new groupsets to the max. Campagnolo's high-end Record and Super Record groupsets will now go 12-speed (first shipments are expected towards the end of the month), and I got to try out the rim brake version of the former and disc brake version of the latter, with around 75 miles of riding completed in total over two days. 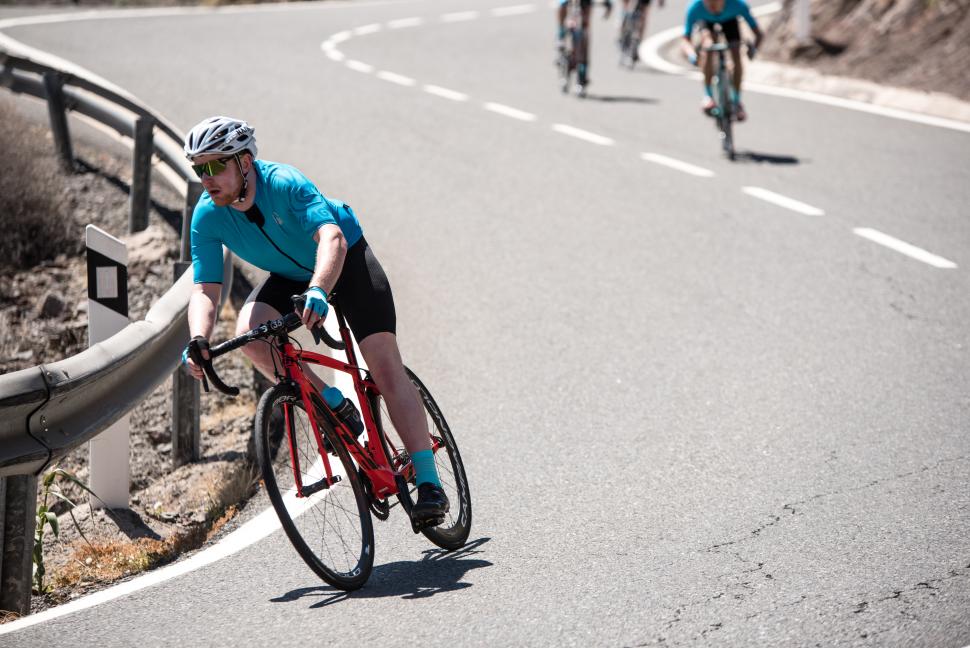 For the first day after the big unveiling, my test bike was a BH G7 Pro. This came with the Record groupset which had 50/34 chainrings and an 11/32 cassette. The bike also had Campag's Bora One 35 wheels, and Deda's oversized 35mm handlebars. As a regular bike tester and with most of those more likely to be Shimano-equipped (and sometimes Sram of course), I don't ride Campag as much as I'd like to, but having used Super Record EPS, Record mechanical and Potenza in the past year, I feel I'm in a reasonably good position to compare and contrast. After taking a minute or so to get my brain aligned back to using Campag's paddle/lever shifting system, the test loop offered plenty of undulations which afforded the opportunity to use most of the 24 gears at my disposal. The paddle and the shift levers have both got bigger, and for me the paddle in particular was noticeably easier to access from the drops. The hoods have also increased in size, and while it wasn't hugely apparent I found them very comfortable and plush in the palm of my hands, even though they're still a bit slimmer than Shimano hoods.

Although most of the bikes I ride for testing are 11 speed, the bike I use for commuting is 9 speed Shimano Sora and I'd most recently tested a gravel bike with 8 speed Claris. I almost felt some psychological benefit by looking down and seeing I had a load of gears left after changing into the small ring, and it's nice having so many of the finer gear options within a wide-ranging cassette. Even though some of the gradients topped out at 16% on our test rides I still didn't touch the last two sprockets with my compact chainrings, so I'd like to try it with 53/39 for my next outing to see how it copes with the chain line on the last sprocket; although I did cling on to my big ring for longer than I normally would on a couple of occasions, and the thinner 12 speed chain seemed to cope with my cross chaining absolutely fine.

The only slight disadvantage I can pick at if I had to would be that by making individual shifts it obviously takes a bit longer to tune in to which exact gear you want if the gradient changes sharply; it's a bit difficult to remember with so many options, and even by looking back at the cassette it's hard to tell where you're at because the sprockets are all so close together. That said, Campag's Ultrashift system which allows you to shift up by three gears at a time or down by up to five pretty much negates this issue, allowing you to make rapid changes up or down the cassette if need be. 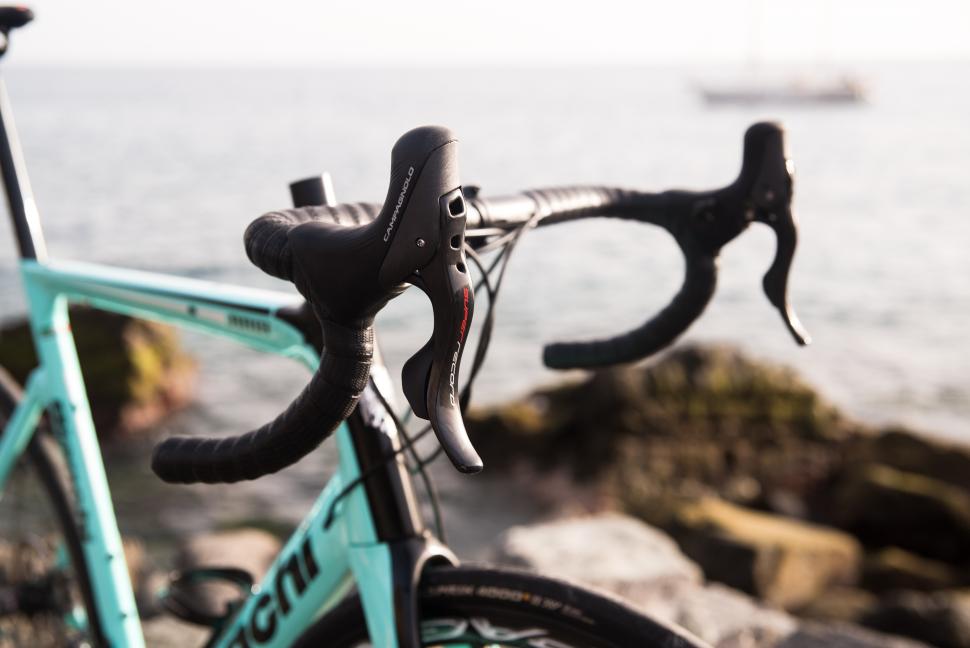 When I first used Super Record EPS in combination with Bora wheels, I reckoned it was the best rim braking I've ever experienced, and my thoughts are the same on this new version of the Record/Super Record brakes with the added benefits of a more comfortable hand position on the levers. They're sharp, responsive and offer plenty of modulation, not quite as much as the best disc brakes but I do believe it's the best braking performance currently available with a rim brake set-up. Aesthetically the calipers have also changed, taking on a more solid and smooth appearance that Campag claim is more aerodynamic. 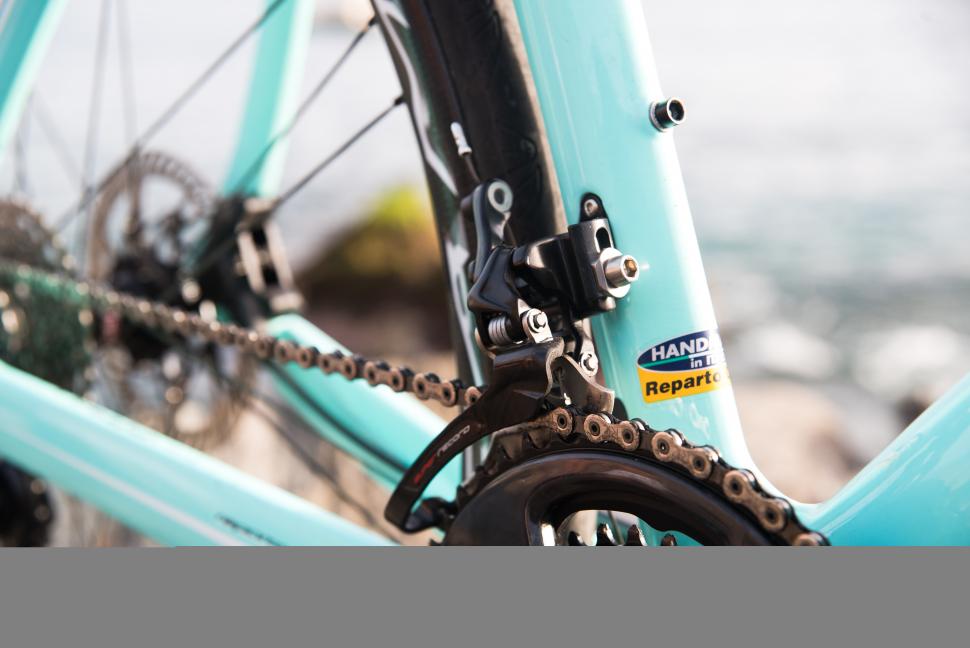 The front mech has also seen some changes, becoming thinner and also gaining an additional rod on top of the lever to make it shift into position more precisely. In practice it was rapid and responsive, aligning perfectly each time whenever I had to change between chainrings. 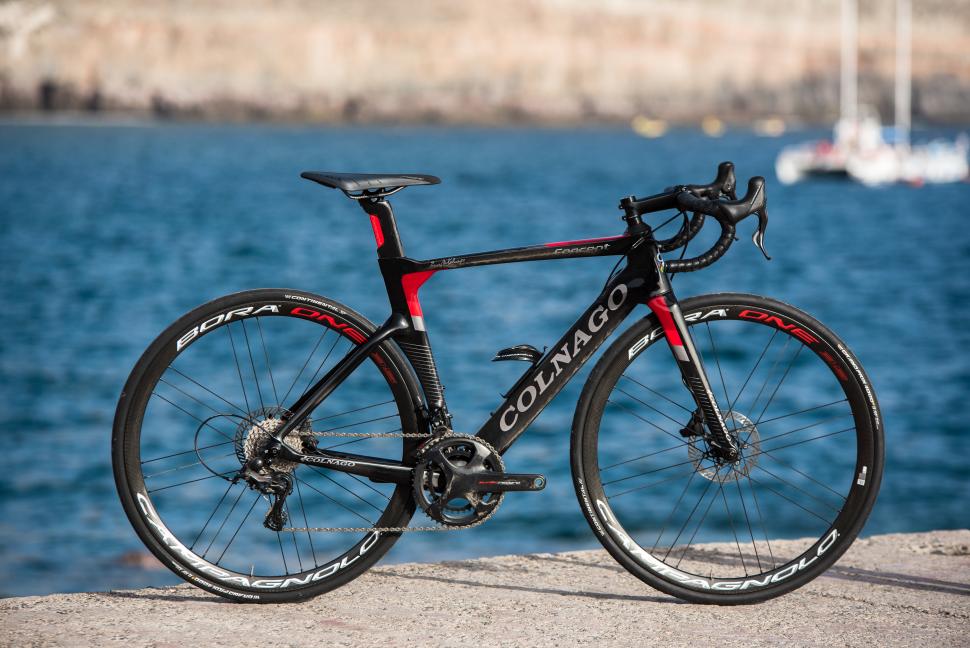 For the second ride I used the Super Record disc brake groupset with Bora One wheels, again with 50/34 and an 11/32 cassette. My bike was the excellent Colnago Concept. We've covered the performance of the shifting above (I don't believe there are any real differences between shifting performances of Record and Super Record) but it's worth mentioning that the brake lever hoods are an additional 8mm taller than the rim brake versions to make room for all the hydraulics. I couldn't really tell the difference and found them just a comfortable in use.

I was on 140mm rotors and thru-axle wheels, and I found the smaller size still offered great stopping power with a lot of modulation, and I felt super confident on some steep and twisty descents (you can also get 160mm rotors if you want extra peace of mind). I don't think they're particularly any better than Shimano's equally good IceTech rotors, but are certainly up there with the most powerful I've ever used and were also pretty quiet on my test ride (although we didn't get any rain which is the true test of course). Although they did get hot on a very long twisty descent I didn't notice any real fade towards the bottom of the hill. Campag say their rotors have an extreme resistance to heat while 'guaranteeing a uniform performance' in all situations, and I'd agree they didn't appear to degrade at all on descents.
An advantage of the Campag disc system is that you can change the responsiveness with a simple allen key at the brake levers, essentially moving the bite point  - slackening or sharpening them up to your personal preference. 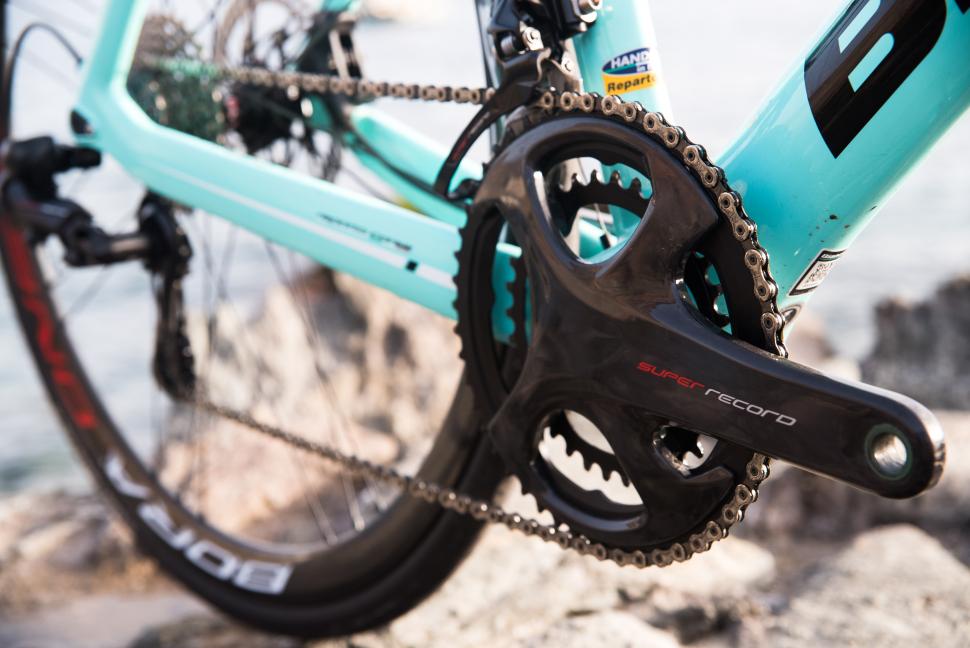 The new Super Record crankset looks amazing in my opinion, and with the prices of the new groupsets coming in so high anyway it might just be the thing that would make me go top-of-the-range. It's full carbon and is partially covered, which gleams in the sun and also purportedly provides some aero benefit according to Campag. If this is true I'd imagine we're talking fractions of seconds over hours, but it certainly looks the part.

Campagnolo would say their CULT bearings are supposed to offer minor advantages because they run smoother with less friction, but it's certainly not something you could physically gauge compared to the USB bearings, which are also ceramic (read more about the supposed advantages of ceramic bearings here to decide whether you believe the hype or not). Shimano now openly say that their Ultegra groupset works pretty much the same as Dura-Ace, it's just not as light, and it's the same story with the differences between Record and Super Record as far as I can tell. If you do want to upgrade to 12 speed and budget is even a slight concern, go for Record; if money is no object and you must save every last gram, you might as well go top-of-the-range. 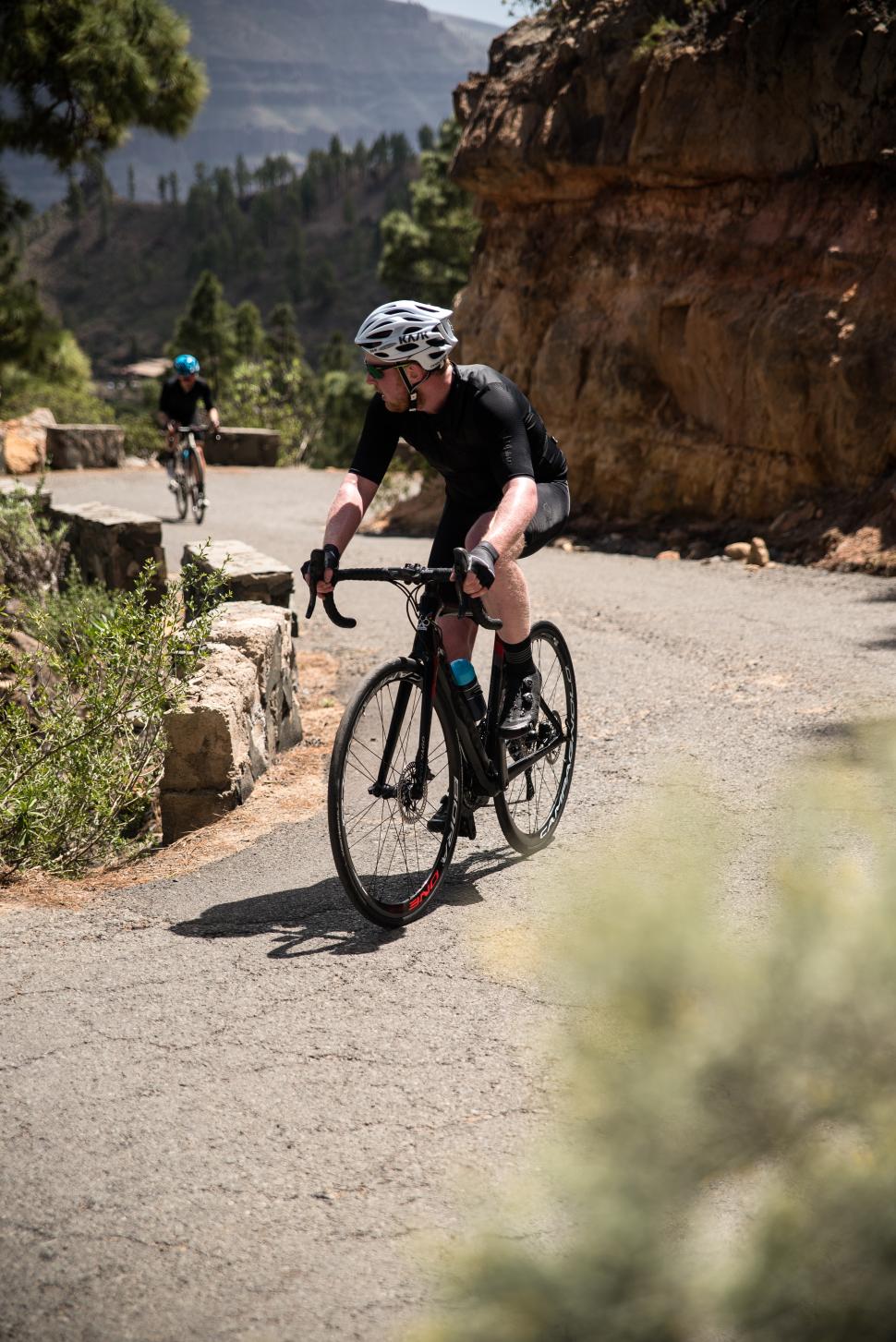 To conclude what I think about 12 speed so far: I'm all for progress and don't see any reason why we shouldn't have more gears as long as it works as well or better than 11 speed. Campagnolo have obviously executed this project well, taken time and invested heavily to ensure it works flawlessly, and have made further improvements elsewhere. I liked having a wide-ranging cassette with gear ratios in there that would previously only appear on cassettes with smaller ranges, and having such small changes all the way through the sprockets makes for very smooth shifting. Do you need it? Probably not. Do you want it? You might after you've given it a go. We'll obviously be looking to get a Record and/or Super Record 12 speed test bike in soon to do a long-term review and see if it throws up any practical issues while performing maintenance tasks, but it's so far so good for the 12 speed revolution...