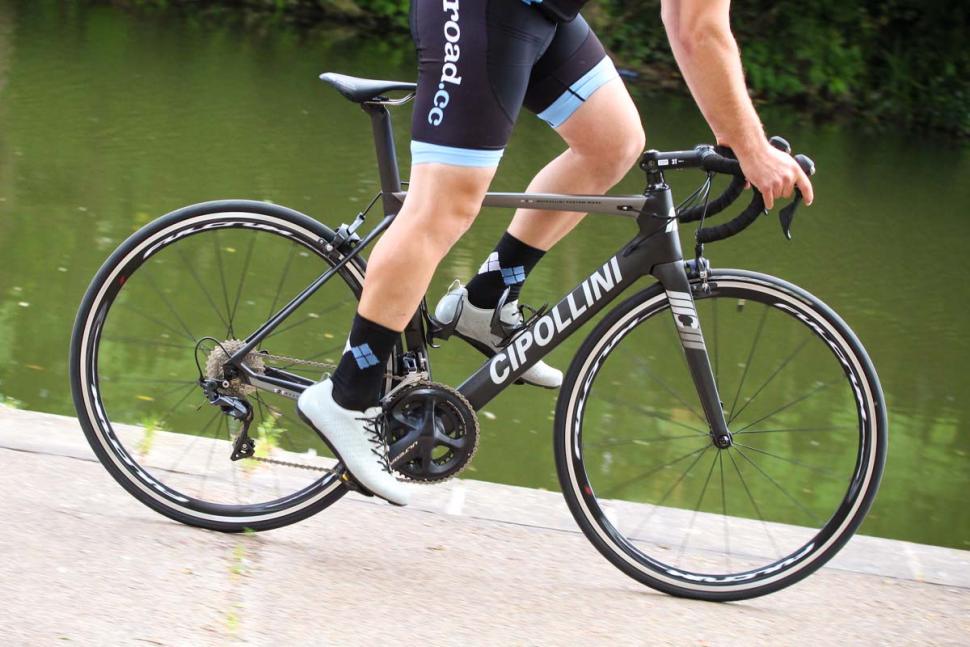 Cipollini’s MCM is a carbon-fibre road bike that, as well as being available in standard sizes, can be made in a bespoke geometry to fit you perfectly.

Most carbon-fibre bikes are made in moulds. The exact processes vary between manufacturers and models but the main section of the frame is usually created as a monocoque – a single piece – with the stays made separately and added later.

The MCM isn’t produced in that way. Instead, it’s created using a tube-to-tube process, a little like a metal frame. The T800 carbon-fibre tubes are cut to length, joined together and carbon wrapped.

This technique allows Cipollini to make the MCM completely customisable. The idea is that you first go for a session with a bike fitter. They assess your requirements and preferences and can input the resulting fit data into the online software at www.mycipollini.com. Cipollini then takes this information and produces the frame to these exact dimensions in 90 days. As mentioned, you can also buy a standard off-the-peg MCM, and that’s what we have here – the medium/large frame, to be precise. It’s very much a race-orientated setup with a 470mm seat tube, a 548mm effective top tube (the length the top tube would be if it was horizontal rather than sloping) and a 143mm head tube. The head angle is 72.5°, the seat angle is pretty steep at 73.8° and the chainstays are short at 405mm. 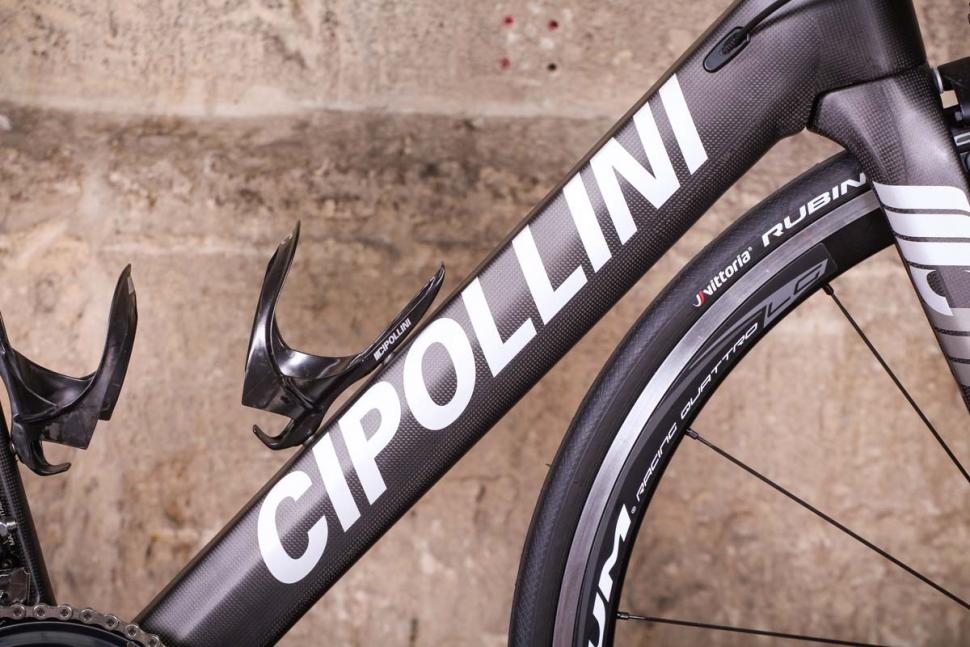 The down tube is enormous, reaching across nearly the full width of the bottom bracket, while the head tube is tapered, as it is on most performance-type bikes these days, the idea being to provide plenty of front-end stiffness. Cipollini uses a 1 1/4in upper headset bearing and a 1 1/2in lower bearing, which isn’t an especially unusual combination, although many brands opt for 1 1/8in and 1 1/4in. The fork that slots in there comes with straight, skinny legs and the crown is integrated into the frame. The seatpost is made to the shape as the seat tube and it’s held in place by a ‘ghost clamp’ design that we’ve not seen before. A slot runs down the front of the seatpost and a small, threaded metal block goes inside it. Two bolts extend in through the seat tube, then through that slot in the seatpost before tightening into the block. It sounds more complicated than it actually is! The net result is that the wall of the seatpost is sandwiched between the seat tube and this little block, preventing it from moving. You don’t get as much height adjustment as normal, but that’s certainly not an issue if you go with a bespoke geometry because you won’t need it. The MCM takes standard rim brakes and tyres up to 28mm wide. This version is built up with Shimano’s second-tier Ultegra groupset and is priced at £4,700. If you’d rather have Ultegra Di2 electronic shifting, that takes the price up to £5,300. The frameset, which includes the seatpost, is £3,100.

In all I covered about 80 miles on the Cipollini MCM, over varied terrain that took in a couple of climbs and a mix of good and not-so-good tarmac. That’s not nearly enough distance for a full bike test but it gave me the chance to form some first impressions. With a 548mm top tube this bike in theory should be the right size for me, but the seatpost at its lowest was still about 5mm too tall for me and my stubby legs, so if I was to buy the bike I’d be taking advantage of the custom tube sizing rather than going for a stock build. 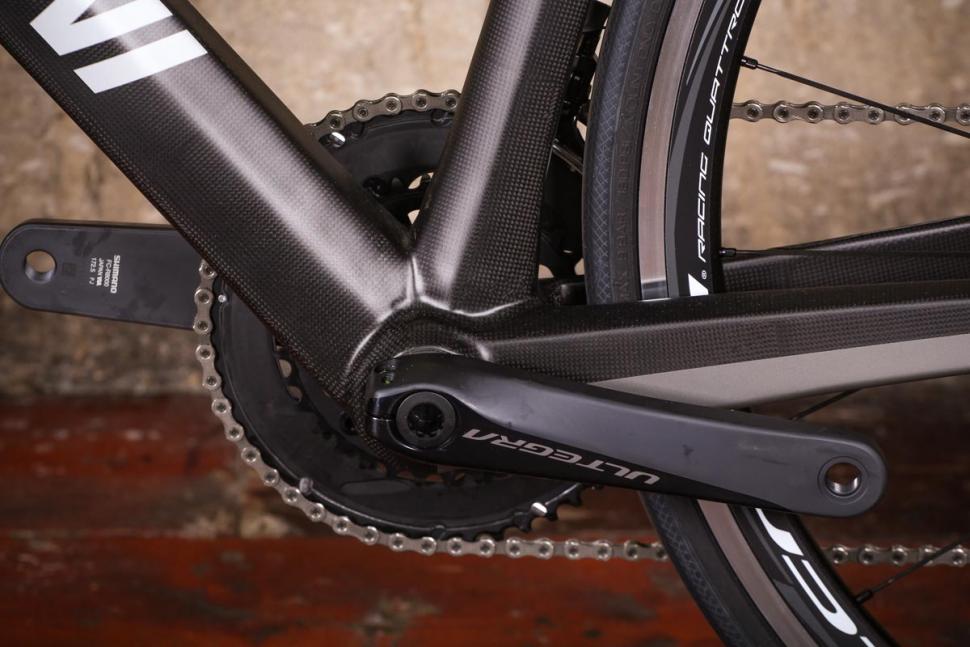 The first thing you notice about the MCM is the size of the tubes – they’re huge. Out on the road that results in plenty of stiffness and a confident feel to the ride. The steep seat angle tilts you forward and, along with the short seatstays, makes for an aggressive setup which might be just what you’re after. This is a bike that feels fast and nimble on the flats and it corners really well. You get plenty of vibration dampening through both ends too.

As for the build, I can’t argue with Ultegra R8000 in terms of shifting speed and quality although I slightly prefer Campagnolo ergonomics and looks, so if I were to splash out for this bike and stick with a mechanical groupset I might go full Italian and have it built up with Campag. I feel that would add to the cool factor – for me, at least. 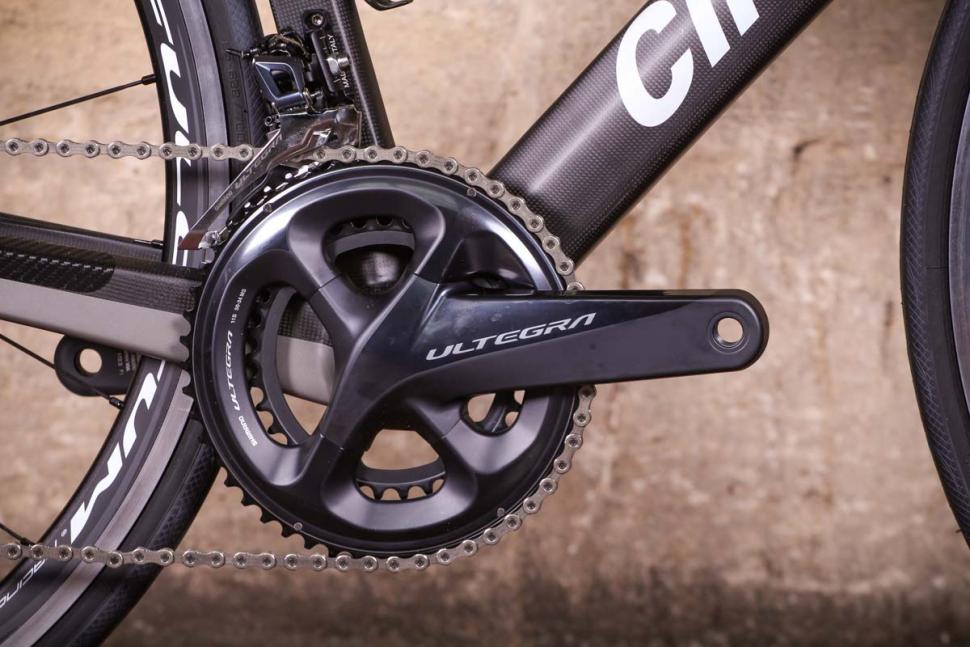 The Selle Italia Novus Superflow saddle was to my liking, as were the 3T bars. I’d liked to have stuck some deeper carbon wheels on to replace the alloy Fulcrum Quattros it came with, and had a standard 53/39t chainset rather than a compact in order to push it at high speeds in a race situation.

Overall, I had a very positive first experience on the MCM. It is a good option for racers who want something rapid and aggressive and demand a bit more comfort than you get with most aero frames.

For more info go to www.mcipollini.com. The UK distributor is Paligap.