Another batch of random highlights from Eurobike, this time including a first look at BMC's new aero road bike, a more affordable Wahoo smart trainer and that £200 fan, Zwift's New York expansion, new power meters from PowerTap, a lovely torque wrench from Effetto Mariposa, helmets with integrated lights and a two-spoke carbon wheel concept from FFWD. Plus lots more so start scrolling for all the shiny new things.

In case you missed them, here's part one, two and three of our Eurobike coverage, and the Rotor 13-speed groupset and CeramicSpeed concept. 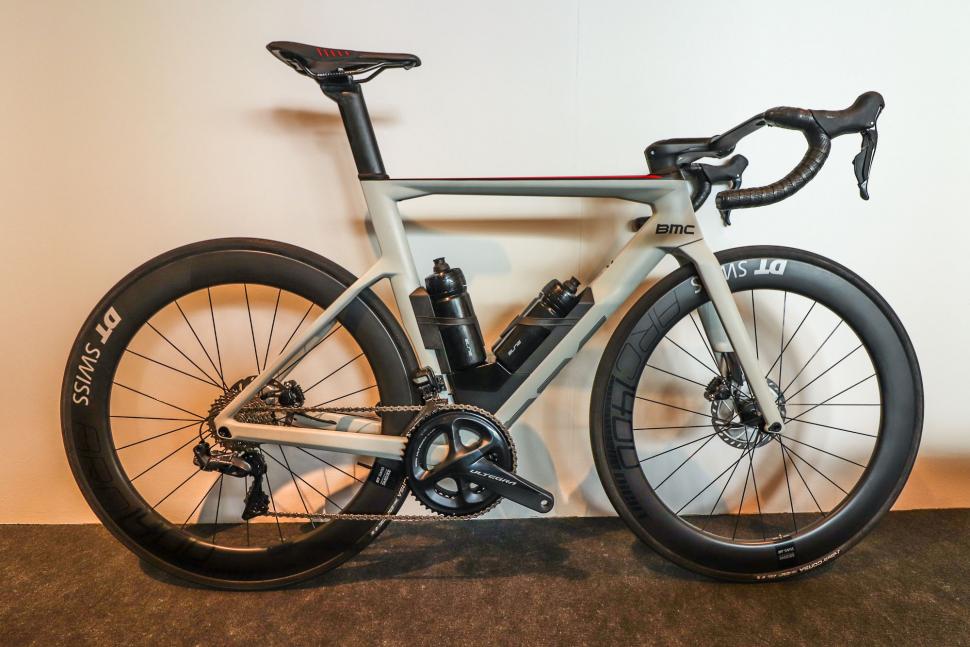 BMC wasn’t at Eurobike but its new Timemachine Road aero bike was, providing us with the first opportunity to get up close and personal with it. It’s a fast looking bike, all sharp lines and purposeful creases, with all cables and hoses routed internally, even at the handlebar and stem where the integration is very impressive. 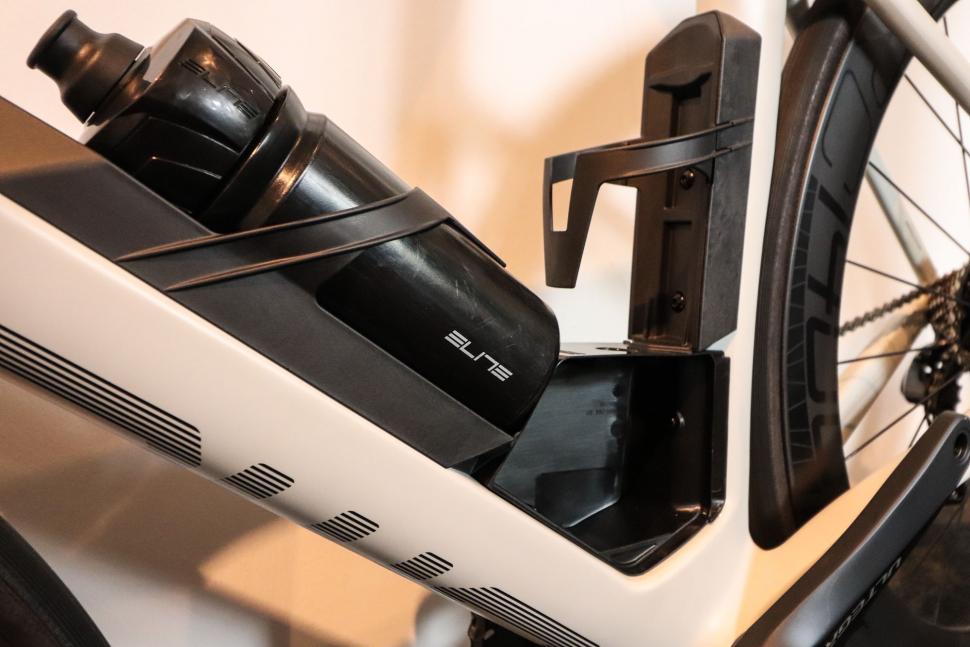 Most intriguing is the water bottle and storage setup. It has developed special water bottle cages that smooth the airflow around the frame and bottle to reduce drag and has taken a leaf out of Specialized’s book by adding an inner tube and tool storage box in the elbow of the downtube/seat tube junction. 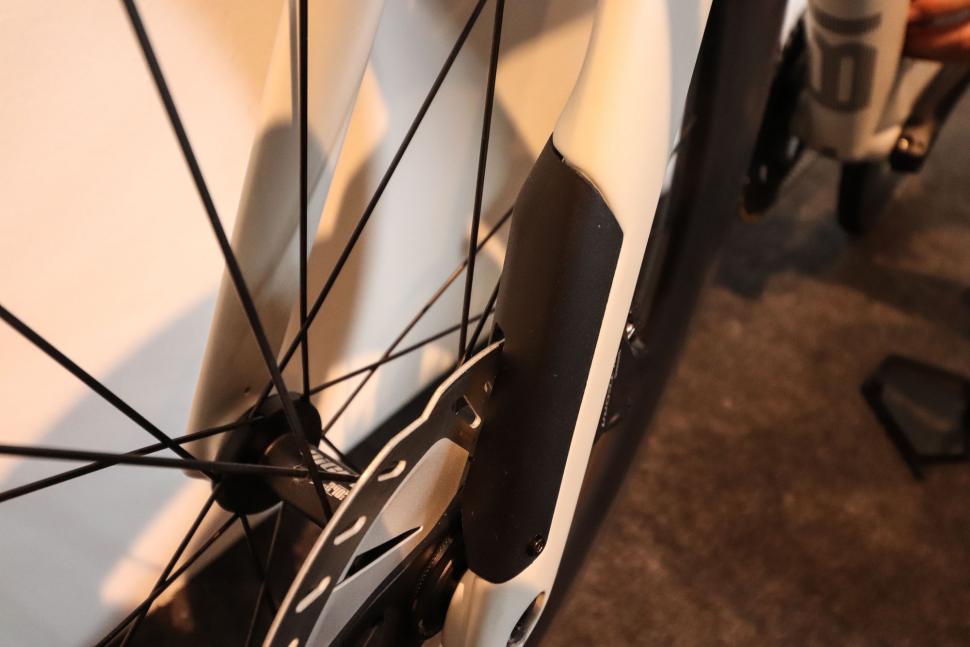 Obviously, this isn’t UCI legal as it counts as a fairing but it’s fine for normal cyclists not confined by the rules. You can basically have a bike that is faster than what the pros are riding! 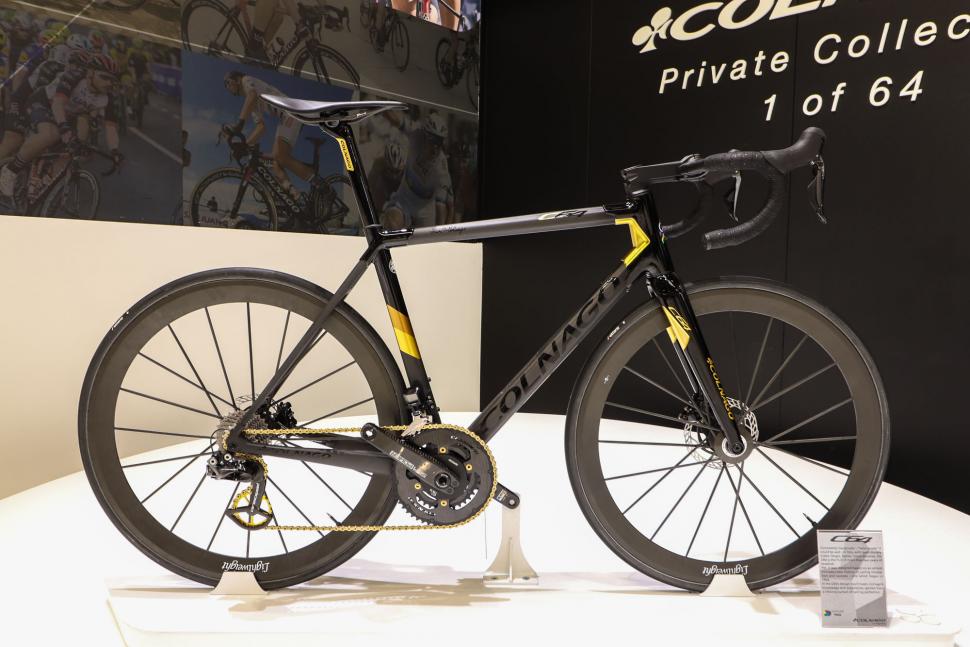 Colnago has launched a new ‘private collection’ of specially built and numbered C64 Disc bikes, with a build kit that is sure to send the price stratospheric.

Lightweight wheels, SRM carbon cranks with CarbonTi chainrings and oversized CeramicSpeed pulley wheels and a bling gold chain to match the frame colour. Only 64 will be made. 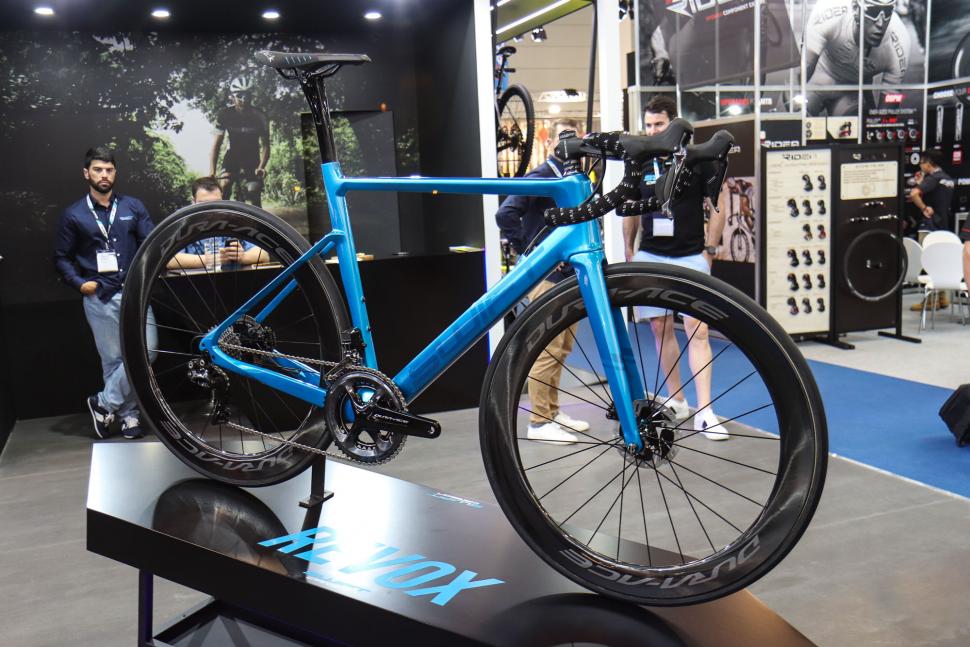 SwiftCarbon has added disc brakes to its Revox model, which is interesting enough. But there's more! The downtube has a large scalloped shape that pushed the water bottle further into the frame to reduce drag. This is a growing trend on aero bikes but we've certainly not seen anything as extreme as this, other than the BMC Timemachine with actual fairings.

Last year Wahoo launched its Climb simulator, this year it launched its own fan, revised Kickr trainer and brand new Core trainer which plugs the gap between the range-topping Kickr and entry-level Snap. The new fan, called the Headwind (see what they’ve done there?), can be controlled manually, via buttons on the front unit, by the Wahoo smartphone app, or it can automatically increase the fan level to match your power output. Pedal harder and the headwind increases. Simples. 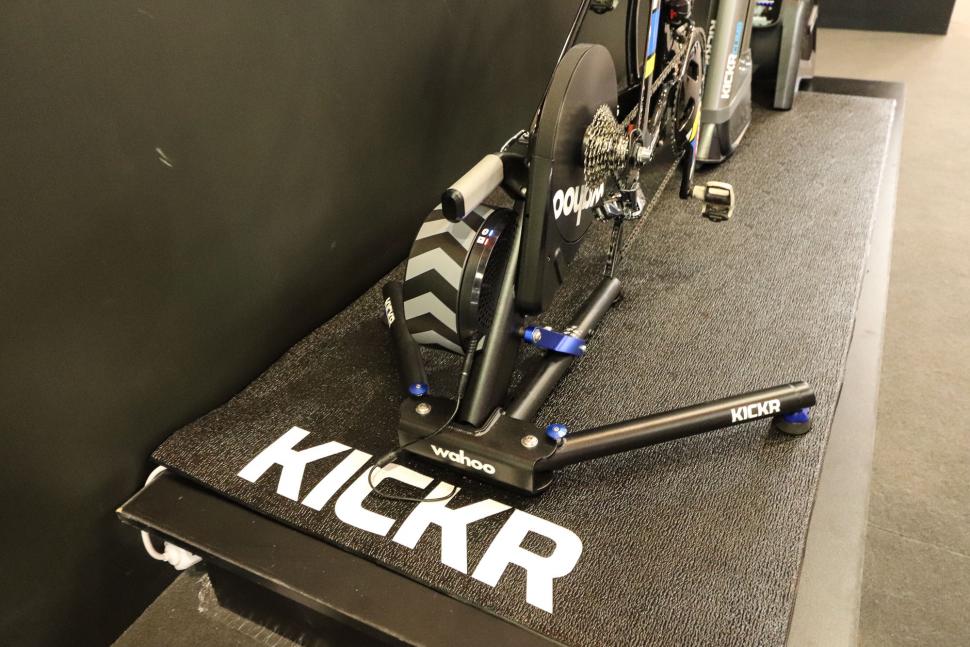 The Kickr has been upgraded with a bigger flywheel and a near silent operation, ideal for cyclists who live in flats and don’t want to upset the neighbours. The Core is all-new, taking everything that is great about the Kickr, including the direct mount interface but brings it down to a £699 price that puts it right in line with the Elite Direto and makes it much more appealing to people put off by the £999 price of the Kickr.

Wahoo and Zwift pretty much go hand-in-hand and together are responsible for the massive increased in indoor training. Zwift didn’t have anything new to show at Eurobike but they let slip they are adding New York as a riding destination, with their own unique spin on it so expect something very interesting. That should go live in the autumn. Before that, they’ll be adding part of the 2018 road race championship course from Innsbruck, Austria sometime in August. Lazer has developed a new helmet called the Century with an integrated rear LED light and the unique Twistcap, a flippable central cover held in place by magnets and which can provide ventilation or aerodynamics depending on your mood or requirements. The Belgian company describes it as an all-in-one helmet and it’s not intended to replace the Z1, instead, it’s aimed at regular cycling, sportives and commuters etc. 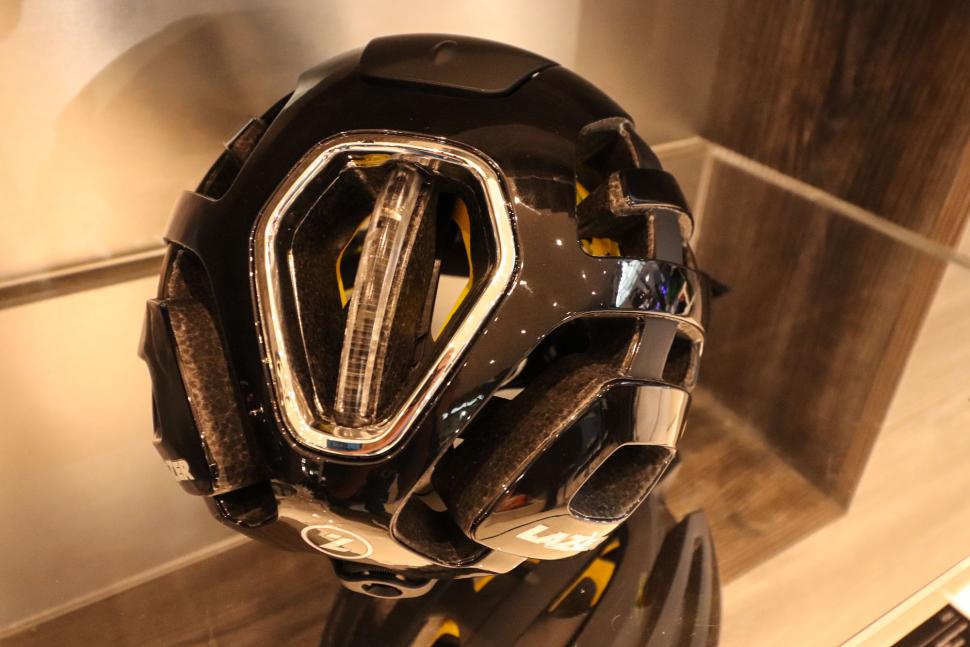 Effetto Mariposa has added this new Giustaforza 1-8 Nm torque wrench to its 2019 range. It’s designed to be smaller and more portable than the Giustaforza 2-16 Nm and comes in a very smart pouch to keep it protected and ideal for throwing in your kit bag. 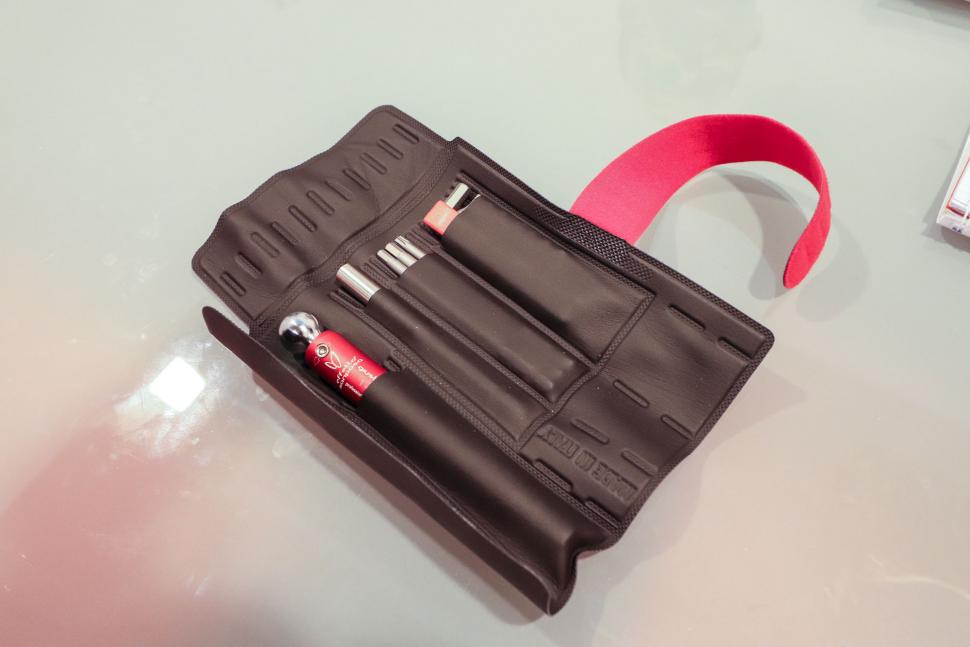 The price hasn’t been confirmed yet but it’ll cost about €100. FFWD has refreshed its wheels for 2019, with new graphics, revised pricing structure and tubeless compatibility right across the range. 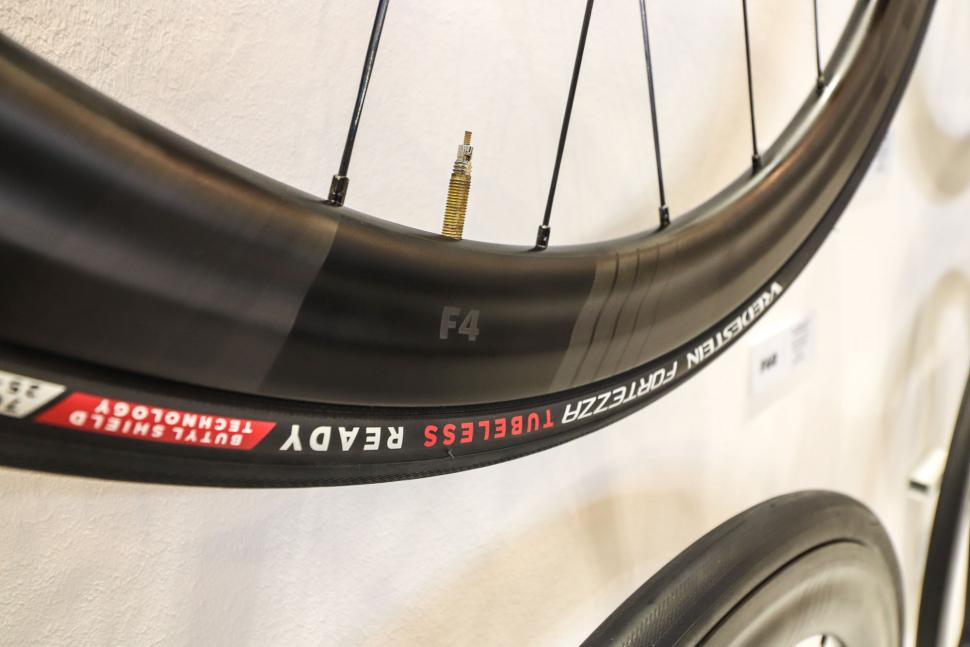 It has redesigned its logos with a sleek black design that is intended to look good on any bike, as this Wilier demonstrates. It has also moved from 3K to a unidirectional carbon top layer. Rim width has been increased as well, along with the aforementioned tubeless compatibility to future-proof the wheels, and it’s managed to make these changes without any increase in weight. 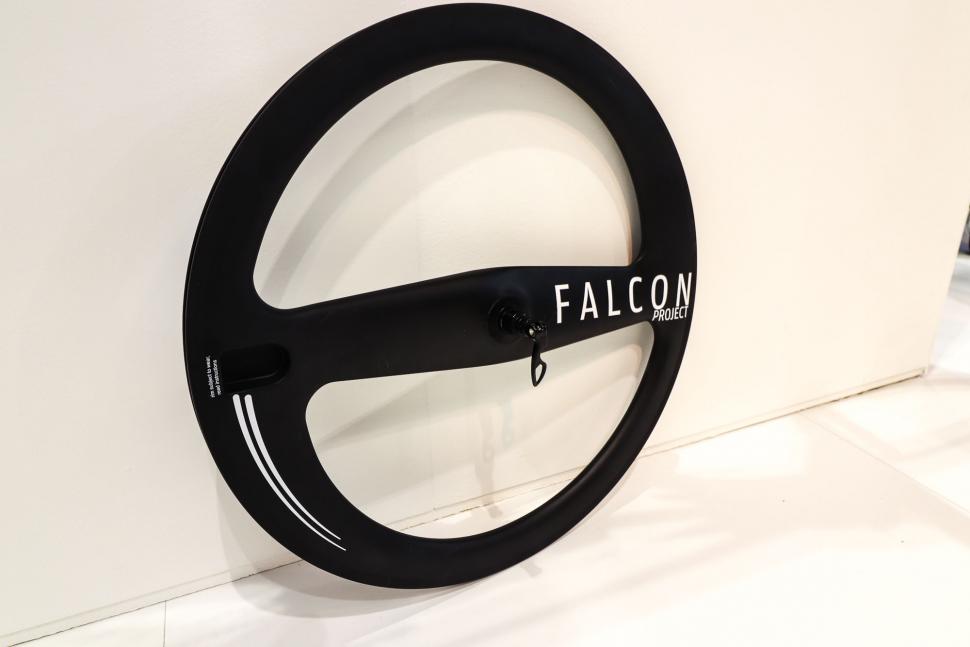 It’s also working on Project Falcon, a two-spoke carbon fibre wheel with alternating rim depths from 45 to 90mm that it reckons should reduce drag. 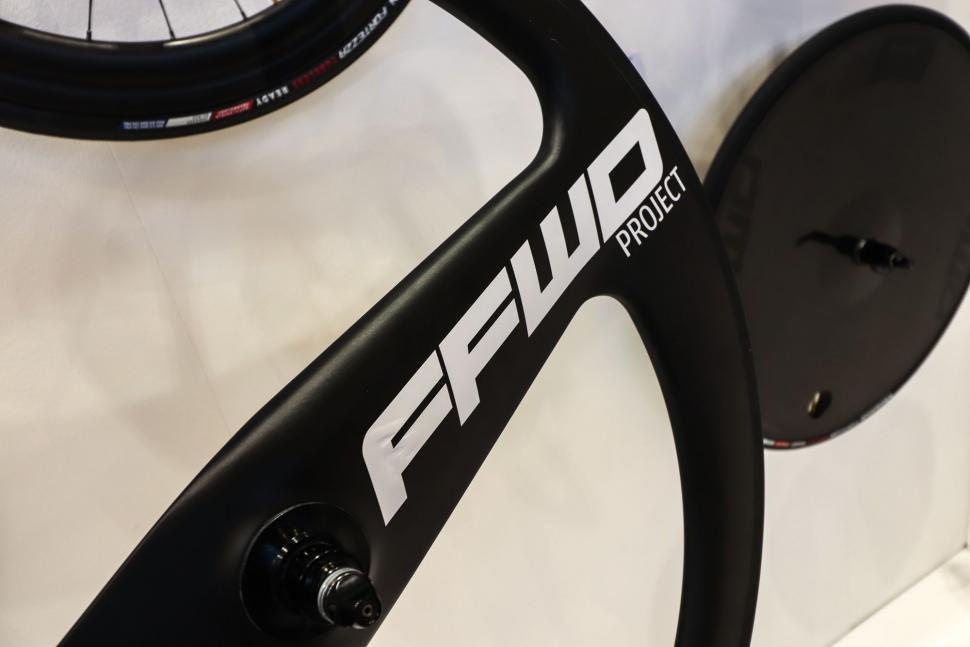 It’s going to test out the theory in a wind tunnel soon before it decides where it’s a viable product to bring to market. 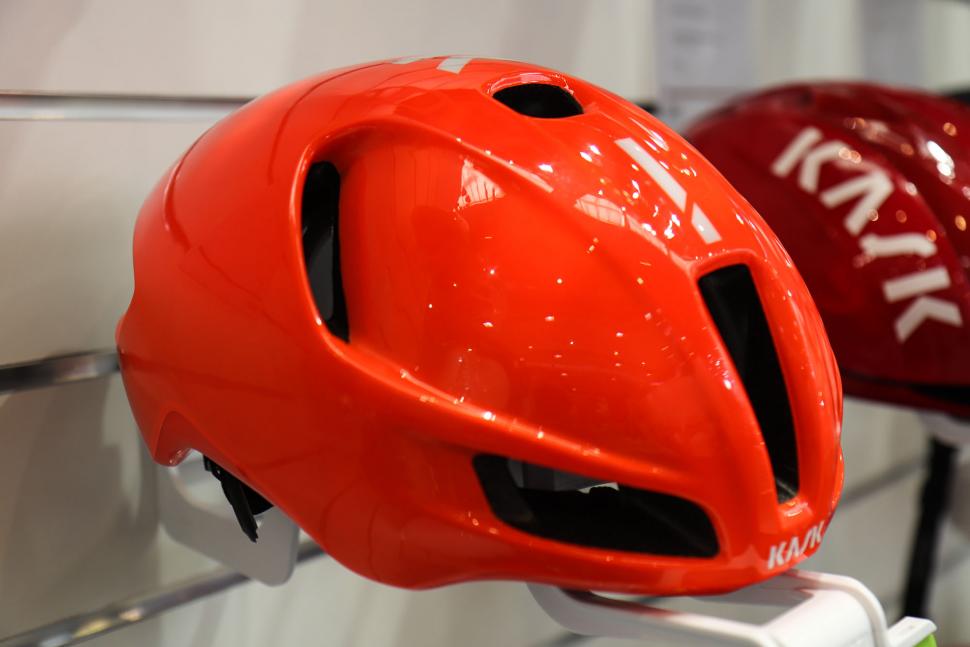 Kask’s new Utopia helmet is billed as the “fastest ever road helmet” by the Italian company, with a design that saves a claimed 6 watts when riding at 50km/h (31mph) compared to the best competitor helmets.

Powertap’s next incarnation of its power-measuring hub, the G4, is currently in the final stages of development ahead of its launch in the Spring of next year. 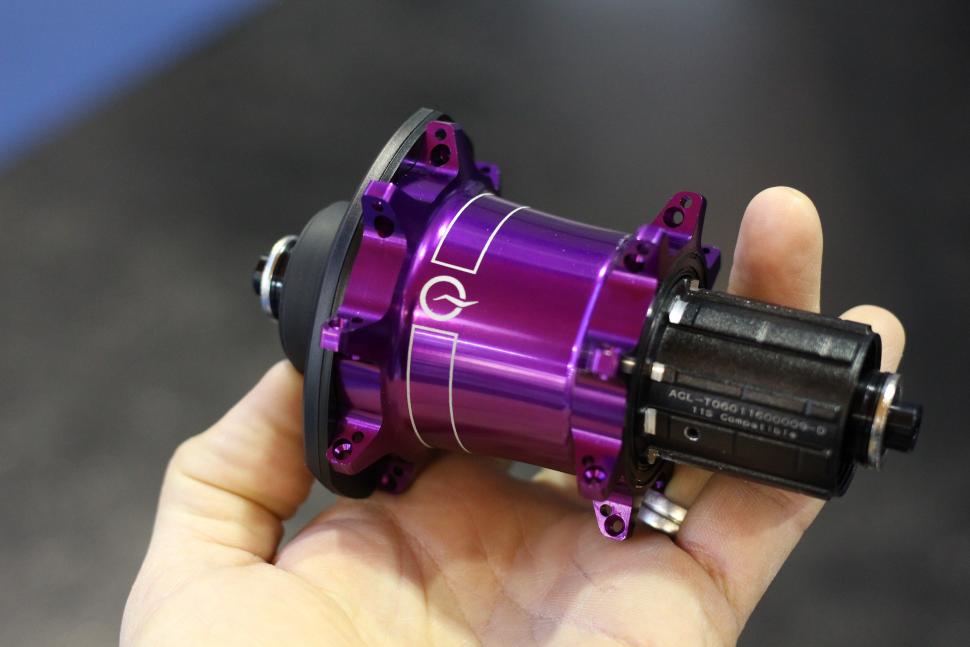 The main talking point is that the hub is now CenterLock compatible, meaning you can use a standard rotor, and end caps are available for all the road and mountain bike axle standards. There’s no non-disc version, although of course, you don’t have to run a disc if you have rim brakes.

The disc makes it difficult to get to where the battery cover would be to remove and change a replaceable battery. So instead of going down that route, Powertap has instead opted to use a rechargeable battery, which the company claims will be good for 100 hours of riding. To recharge it you simply need to attach a magnetic charging lead to the two battery connections. 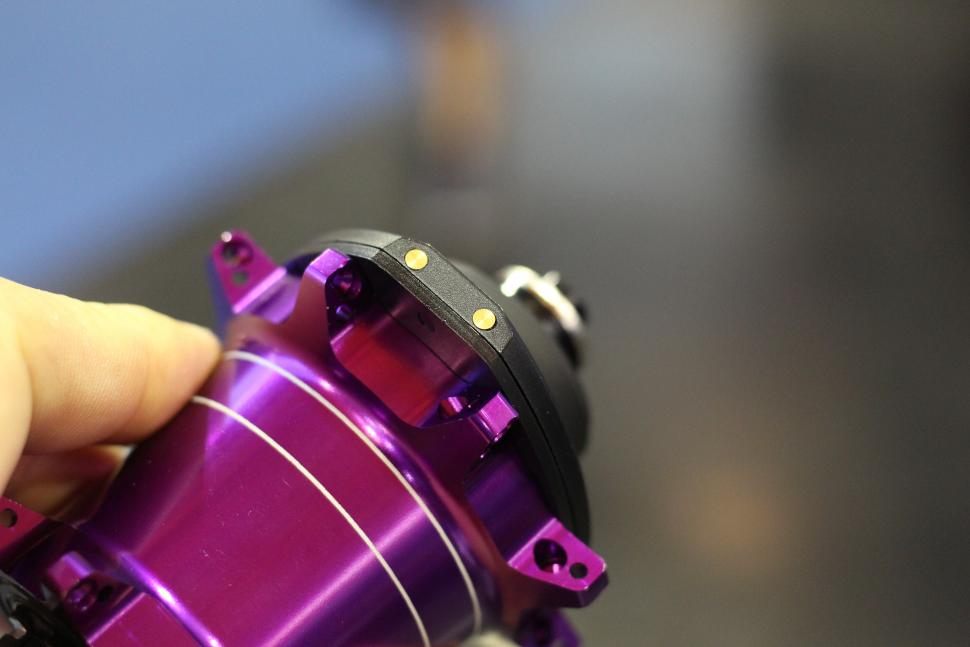 As you can see from this shiny purple prototype Powertap are looking at offering various finishes, although the stock hubs will most likely be matt black like their predecessors.

CycleOps have updated both their Hammer and Magnus controllable trainers. It’s decided to do away with those names, and instead call the new units H2 and M2, which sounds a bit more techy. In terms of the actual physical hardware, there aren’t many changes. 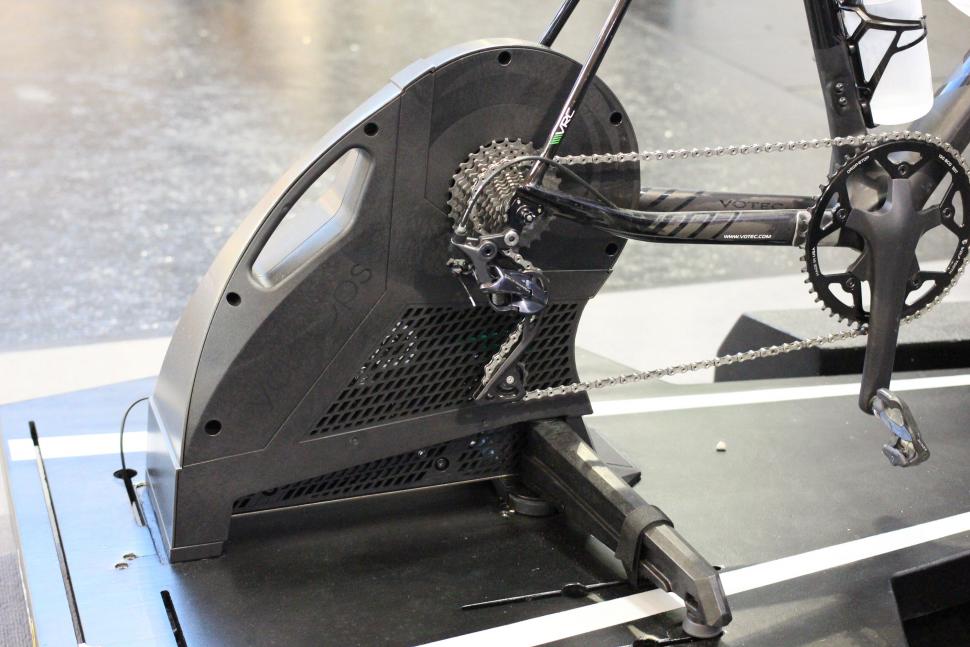 The bearings have been updated, which CycleOps says makes for a smoother and quieter ride. The external look has changed too, with a new gunmetal grey finish. Some firmware updates have also made the H2 and M2 trainers quicker to respond to resistance changes when they’re being controlled by apps like Zwift. Those same updates will be available for owners of existing trainers too. CycleOps has also been following the trend for indoor training advocates to suspend their bikes for a more realistic feel. Most of the time this has been achieved in a fairly Heath-Robinson style with plywood and tennis balls, but CycleOps is taking things to a whole new level with their giant suspended platform.

About the size of an aircraft carrier (okay, a bit smaller), the CycleOps platform not only allows the bike to rock from side to side but also fore and aft, a bit like Elite’s E-Motion rollers. Only more so. It does give a huge amount of freedom for the bike to move about underneath you, which will be good for a more realistic feel as well as for improving your core strength when indoor training. It’s just a concept at the moment, but CycleOps told us that the response had been very positive, so We wouldn’t be at all surprised it the platform makes it into production.

1
Conor McGregor knocked off his bike... and gets a lift home off the driver who hit him
2
167 cyclists – and just four drivers – fined in police crackdown during Tour Down Under
3
Driver assaulted cyclist for questioning mobile phone use
4
Van Rysel to launch seven new bikes, including high-end race models
5
Cyclist hit by truck driver has compensation cut after judge says lack of helmet contributed to injuries
6
Councillor calls for anti-bike barriers to prevent “dangerous” cyclists “zooming across” foot tunnel
7
Town council says “restrictive” RideLondon sportive not wanted – because locals “can’t get out of their own road”
8
“Cyclists welcome – just in the right place”: Coastal path upgrades set to be shelved over concerns about environmental impact and “speedy cyclists”