We've just got our hands on a Canyon Ultimate dripping with Campagnolo's new 12 speed Record disc groupset. Jack checks out the finer details in this video...
by Jack Sexty

It's difficult to say it in one breath, but then again the Canyon Ultimate CF SLX Disc 9.0 Movistar with the new 12 speed Campagnolo Record groupset did indeed take our breath away when it arrived in the office this week. The bike is in Movistar team colours with a snazzy aqua-to-navy-blue fade paint job (that we think happens to almost match up pretty well with the equally legendary road.cc jersey), and can be bought as seen for £5,099 on Canyon's website. When you consider that the Record disc groupset has a RRP of £2138 on its own, and you’re getting a lovely set of Bora One 50mm carbon wheels too, that’s relatively not a bad deal at all. 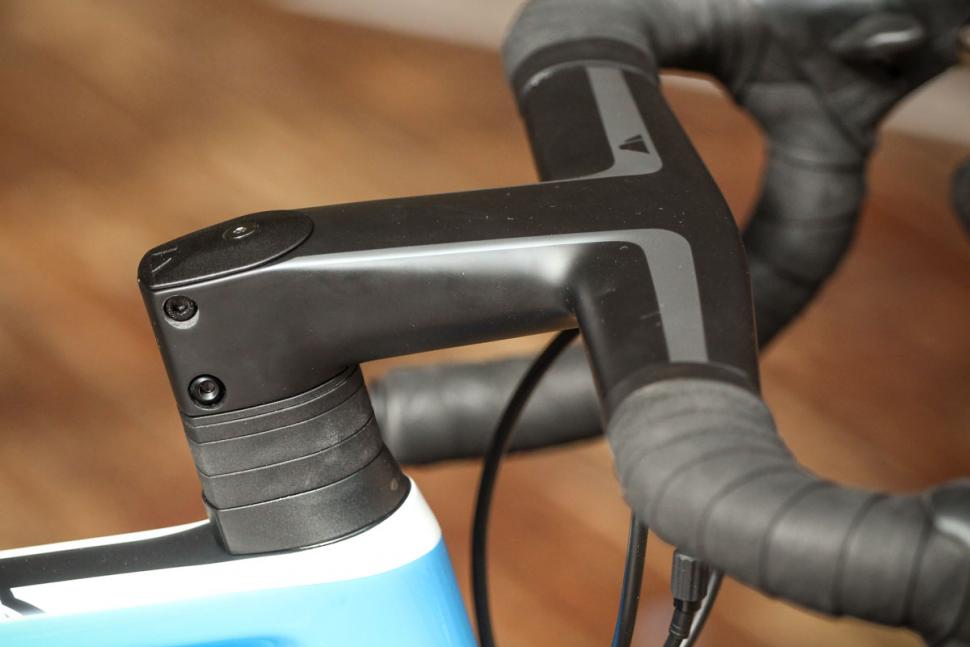 The Canyon Ultimate frameset is unchanged since it was revamped in 2016. It's got some aero profiling to the tube shapes and that sleek integrated H36 aero cockpit, plus plenty of attention was paid to making it more comfortable than the previous version. It's an all-round race bike that has succeeded at grand tours, world championships and monuments alike. Some adaptations were made to the disc version when it was launched last year, such as increasing the chainstay length and tyre clearance to make way for the wider hub spacing on disc wheelsets. It’s also a little heavier than the rim brake version because the fork and chainstays had to be strengthened where the brakes are mounted. 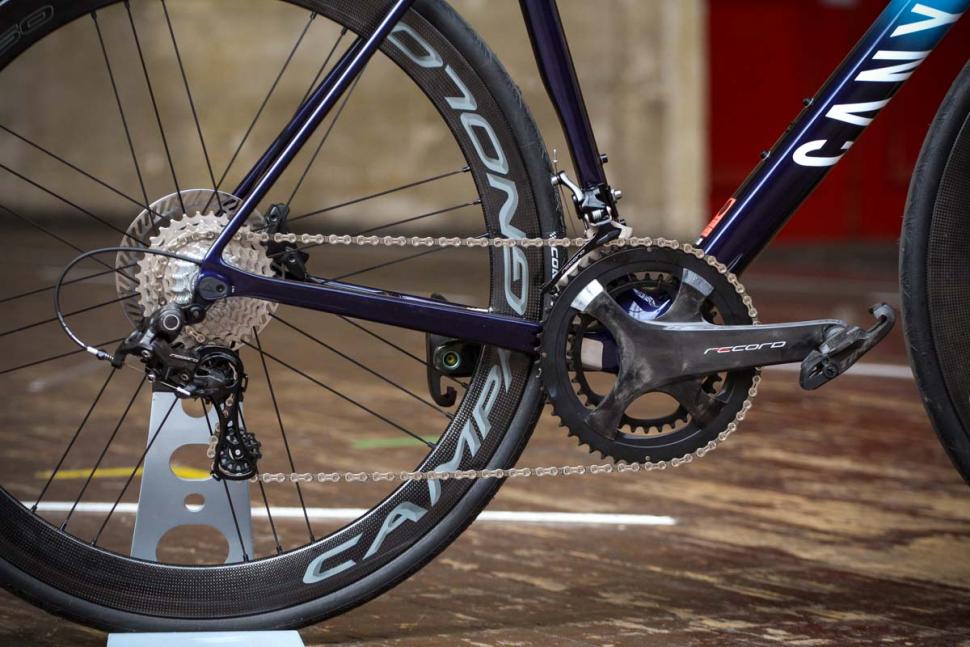 Moving on to the Record Disc groupset itself - as we explained when Campagnolo launched 12 speed back in April, the aim was to make the new groupset work as well, if not better than the previous 11 speed version, with the benefit of an extra gear to give you smaller jumps between cogs and therefore more efficient riding. Both the 11/29 and 11/32 cassettes available now have one tooth increment changes all the way to the seventh sprocket. That means no nasty jumps and more gear choice within your cassette's range.

Aesthetically the biggest change on 12 speed is the super sleek new crankset. The fuller appearance is supposed to provide a fairing of sorts and is claimed to be more aero than the previous chainset. It’s also the same design across all set-ups; regardless of your cranklength and whether you have a disc or rim groupset, it’s the same 8-bolt spider design. You can get it in 50/34, 52/36 and 53/39 sizing. 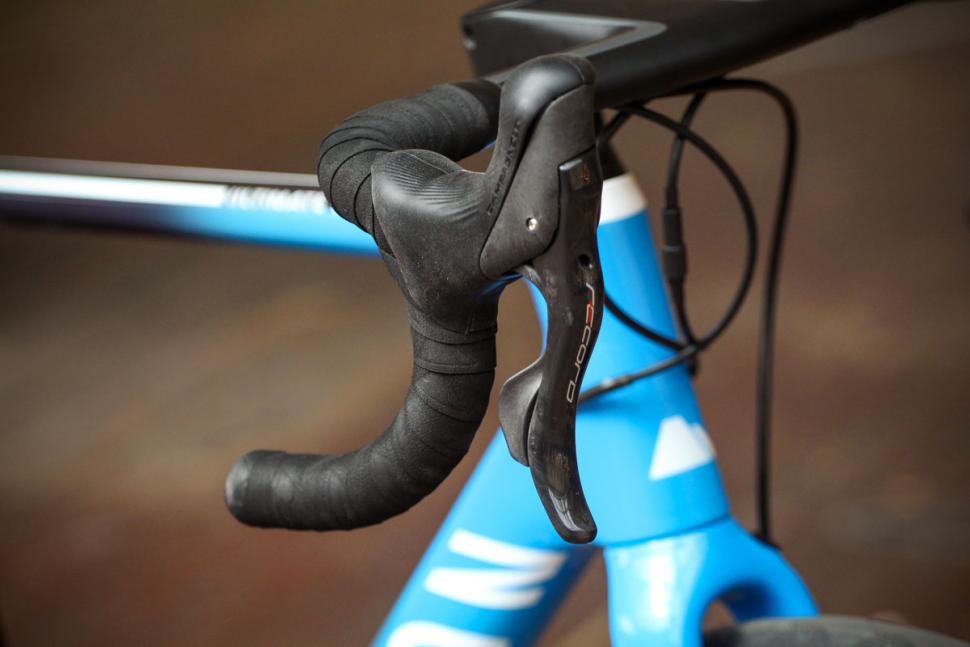 The new Ergopower levers have seen a complete overhaul to offer better ergonomics with the same crisp shifting that Record and Super Record is renowned for. The upshifting paddle and downshifting levers have both been enlarged to make them easier to feel for. You can also customise the position of the levers with an allen key to find the perfect position or your hand size and shape. The Ergopower levers on the disc groupset are only 8mm taller than the rim brake equivalents even with all the hydraulic gubbins in there, so that’s not going to make a discernible difference to how they feel in your hands. 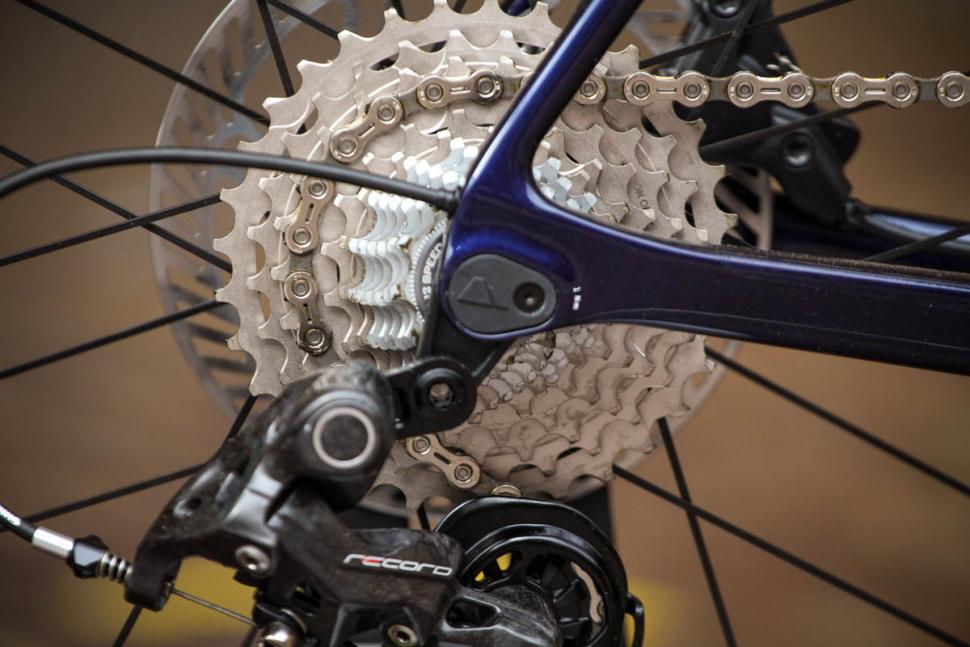 If you do want to make rapid shifts up or down the cassette, Campag’s Ultrashift mechanism allows you to shift three gears up with one click of the paddle or down five with one shift of the lever quickly and efficiently. This appeared on the previous 11 speed iterations of Record and Super Record.

Our test bike has 160mm rotors, (you can also get 140mm) and with Campag going big on disc last year that’s continued with the 12 speed project. The calipers are compatible with all flat mount-ready frames and don’t require adapters. There’s a magnetic spring inside that eliminates the need for mechanical springs between pads, which Campag say makes them more reliable over time. The brake pad also has a wear indicator, with a special form that is said to make it easier to guide the disc rotor into place when fitting your wheel. This is made with an organic resin compound that’s supposedly extremely resistant to heat. We have the second-tier Record groupset in for test, and the top-end is Super Record. So what are the differences? Well after riding both versions at the launch a few months back I’d say in practice there are no immediately obvious differences at all. There are some small weight savings by going Super Record and slightly more luxurious materials used; for example, Super Record uses Campag’s super fancy CULT ceramic bearings, while on Record you have USB ceramic bearings. The Super record crankset has a hollow construction with a titanium axle, while the record version is solid and has a steel axle. There are also some small differences in the rear derailleur, with a part alloy construction in the lower cage on Record while Super Record is almost all carbon. Finally, the front derailleur cage is carbon on Super Record and alloy on Record. The full record disc groupset weighs in at 2,453g while Super Record is 2,323g. So far we haven’t seen 12 speed in the peloton yet, and as we spotted at the Tour de France, Team Movistar were still on Campag’s 11 speed super record EPS electronic groupset (they always use electric). Campag are yet to launch the EPS version of the 12 speed groupsets but when they do we’ll expect to be seeing it in the peloton quite soon. How soon we don’t know, but we’ll be having a good look at Movistar’s fleet of bikes when the Vuelta starts next Saturday for clues...

We're going to be testing the bike (and specifically the groupset) out to the max over the coming weeks, so expect to see a full review of both in September.