Team Sky's TT bike of choice has been given a tri-specific makeover that says goodbye to the UCI, with added fuel boxes that improve the aerodynamics of the frame...
by Jack Sexty

Pinarello claim to have made their Tour-winning, hour record-holding Bolide even faster, by launching a triathlon version they've dubbed the Bolide TR+.

This is Pinarello's first tri-specific bike (although former pro cyclist turned triathlete Cameron Wurf in the video below has been using a modified version of the regular Bolide for a while) and the main changes are the integrated storage options and the addition of disc brakes, something we've seen on numerous tri bike launches this week ahead of the Ironman World Championships.

Pinarello say the storage boxes actually lead to an aerodynamic improvement compared to the TT Bolide, and the TR+ has spent plenty of time in the wind tunnel to refine aerodynamics. The geometry has been tweaked for tri, with a 35mm increase in the headtube to improve ergonomics and an 8mm lowering of the bottom bracket to make for better stability. The seat tube angle is a mean 78°, and the chainstays are super short at 395mm to ensure maximum power transfer. The tyre clearance has been made bigger, able to take up to a 28mm tyre on a 30mm rim. 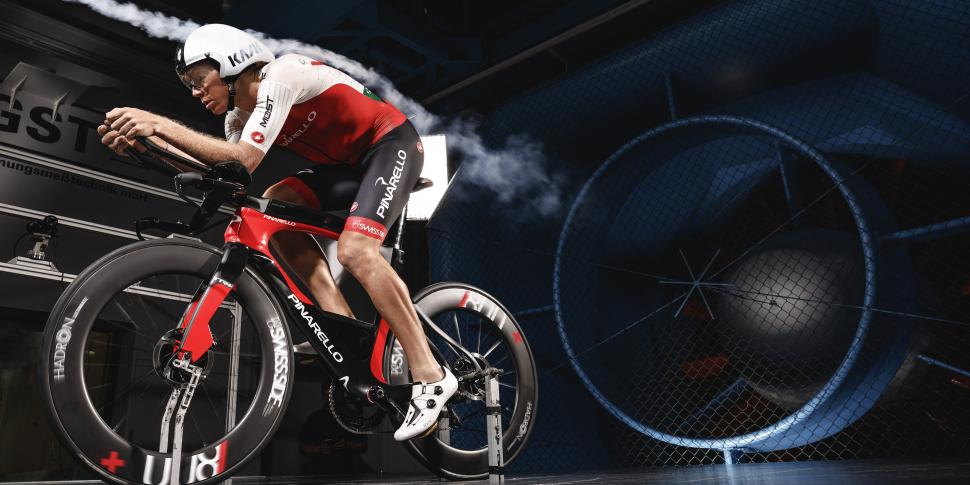 On the top-end TR+ Pinarello claim they are using the best carbon in the world, Torayca T1100G UD with Nanoalloy that's favoured by the aerospace industry, while the TR uses T700UD carbon fibre. As you may have expected you'll need pretty deep pockets to get your hands on either version, with the Bolide TR available as a complete bike with a Sram Force groupset and Fulcrum Racing Quattro Carbon wheels for £7,500. A Shimano Ultegra Di2 version is £9,500, while the top-of-the-range TR+ with Shimano Dura-Ace Di2 will set you back a cool £11,000.

While the Italians have gained a bike, they're currently dealing with the less positive loss of the Tour de France trophy, stolen from their stand at the NEC in Birmingham: “We are obviously devastated about this. We accept full responsibility, and (we) have personally apologised to Geraint. Obviously we all hope that the trophy can be recovered”, said Pinarello's managing director Richard Hemington...

1
Near Miss of the Day 794: Driver passes cyclists signalling right — police suggest riders should have turned quicker
2
Tabloid panic over study (apparently) saying cyclists could crush their genitals if they don't get out the saddle
3
National Highways warns of "significant dangers" in racing time trials on major roads following A11 death
4
Cyclists robbed by moped gang as two more bikejackings reported across south London
5
"They said give us the bike or we stab you": Another cyclist targeted by motorbike-riding muggers on popular route out of London
6
Near Miss of the Day 793: No action for driver overtaking into oncoming traffic (+ interesting Operation SNAP feedback)
7
road.cc Recommends updated with 11 brilliant new products
8
Cyclist's severed foot found on hit-and-run suspect's car as driver arrested