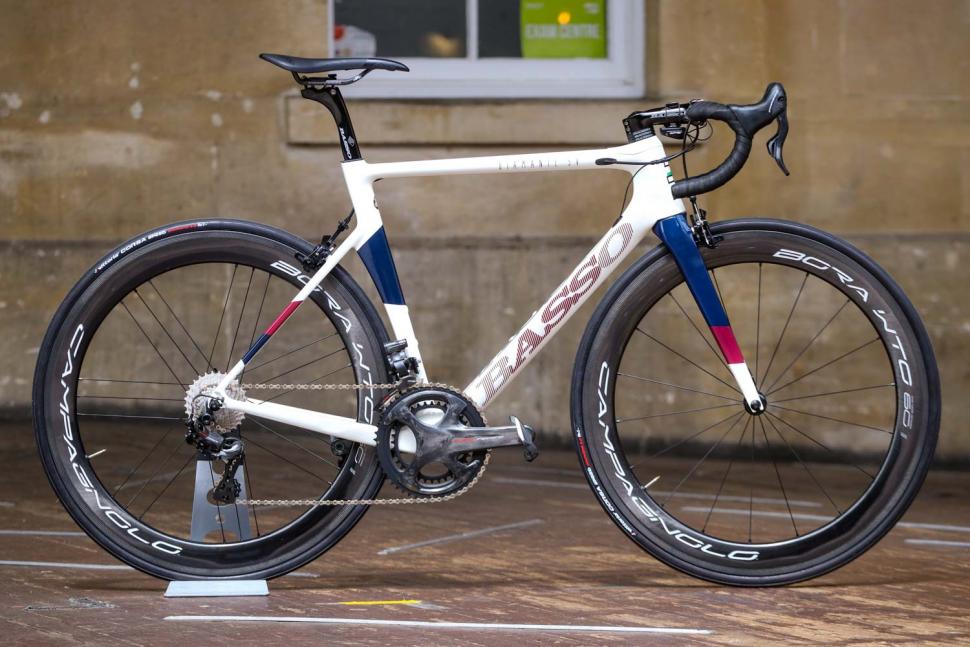 We needed a vessel to test Campagnolo's new electronic version of their 12 speed groupset, and ended up getting a bit carried away...
by Jack Sexty

Back in March, Campagnolo launched the electronic version of their top-level 12 speed groupset, Super Record EPS. It's also the most expensive gruppo ever made costing over £4,000 at its recommended retail price.

We decided a special groupset deserved a suitably special build, so we made some enquires and this was the result...

The frame is Basso’s Diamente SV, with the SV standing for Super Veloce or 'super fast' in English. It’s basically a more aero version of their standard Diamante frame, with slim lines and plenty of aero-inspired features such as the blade shape to the seat tube. Only the best carbon has been selected, with high modulus T1000 and T800 grades used throughout to craft this piece of hand-made Italian loveliness. Arguably the Diamante SV doesn’t go as far with the aero shapes and integration as the latest wave of aero road road bikes launched since 2018 such as Trek’s Madone or the Cervelo S5, and there is still a bit of cabling exposed at the front. Some of the shapes are a little more rounded than you'd expect on a full-on aero bike around the head tube and fork, but there's still no doubt this is a fast yet balanced frame that is meant to be ridden fast. You’ve got a proper racing geometry here with a short headtube, long reach and low stack to get into a super aggressive position. The unusual seatpost design is known as the 3B Basso system. It allows for a totally smooth and clean clamping mechanism, with the U-shaped seatpost sliding into a wedge in the downtube that all tightens together with the allen key bolts. It’s super clean, works very well and there’s also an elastomer surrounding the post that’s supposed to add a bit of vibration dampening for a smoother ride. The frame is finished in Basso’s pastel white colourscheme with the blue and burgundy details that I think that looks excellent – not too showy but stunning all the same. The wheels are Campagnolo’s new Bora WTO in a 60mm depth front and rear. Campag have made plenty of big claims about them, saying they’re the most aerodynamic wheels they’ve ever produced, being put through countless hours of testing in the wind tunnel. They even claim that at some wind angles these wheels can create 'negative drag', big talk indeed. They weigh in at just 1547g for the pair, and we've dressed them with a pair of Vittoria Corsa Speed tyres. 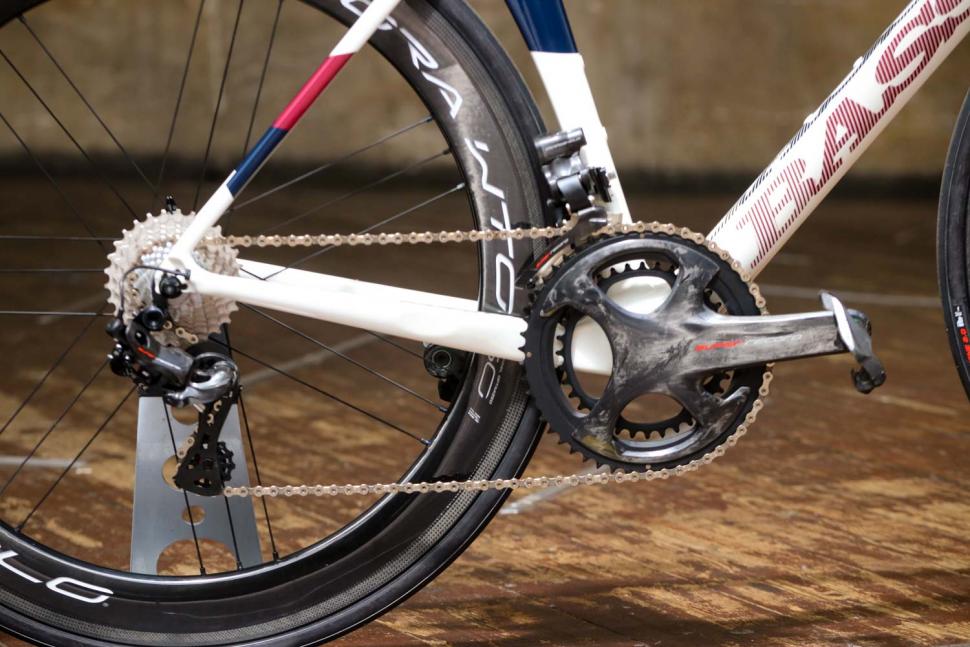 Our test groupset has a mid-compact chainset and an 11-29 cassette. If you've seen the mechanical versions you'll notice that the aero-inspired crank arm and levers maintain the exact same aesthetics. 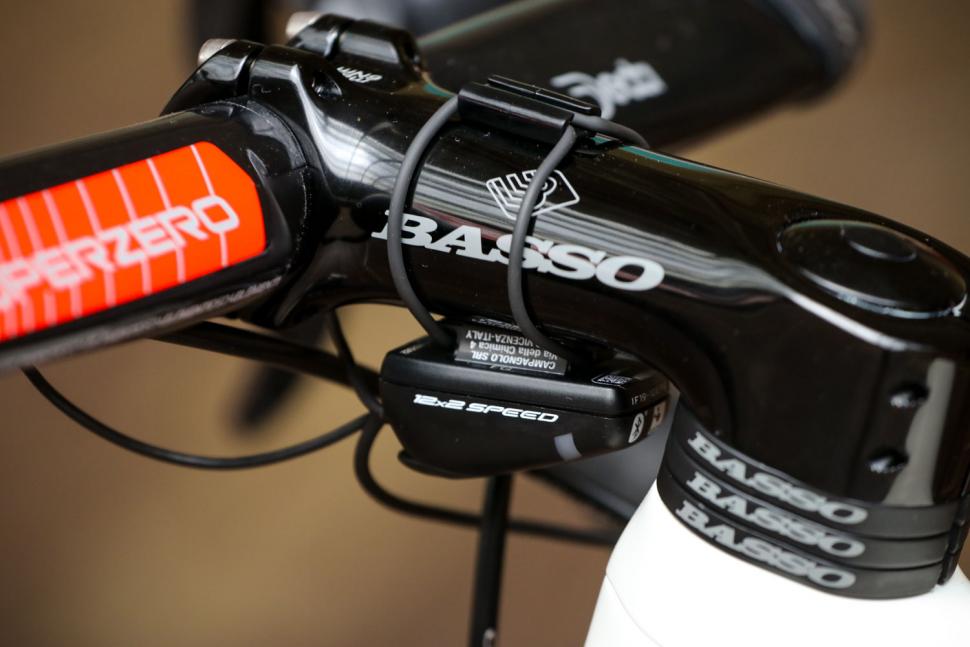 You have to look a little closer to spot that it’s the EPS version, such as the motor unit on top of the front derailleur and the junction box mounted under the stem. Campag have now also made a junction port that fits into the handlebars, and you can also have it integrated into compatible framesets for an even cleaner and more integrated look. This is the direct mount rim brake version of the groupset – which was an intentional request on our part because we’ve already reviewed Campag’s latest hydraulic disc brakes. We were keen to see how the rim brakes stack up, as their top-level rim brakes are commonly thought of as some of the best around. The Basso Diamente SV frame does come in a disc brake version, so if you wanted one that would be an option. The Super Record shifters have exactly the same shape, ergonomics and looks as the mechanical 12 speed versions, but there’s a couple of extra tricks up the sleeves of the EPS gruppo – the main one being that you can go all the way up or all the way down the cassette by just holding down the paddle or the lever for the most rapid shifting possible. Campag claim the levers and shifters are responsive enough to stop at whichever cog you mean for them to stop at, but if it all feels a bit too quick and robotic then you can customise how many single-click shifts you can perform in one go using the myCampy app. Elsewhere, the power unit is now in its fourth iteration and a bit slimmer and lighter than version 3. On the front derailleur Campag say their shift motors are the most powerful on the market and able to deal with shifting under extremely heavy loads without issue. The rear mech has the same Embrace technology as mechanical Super Record which increases how much chain is wrapped over each single sprocket in individual shifting positions. To give the build some extra wow-factor we've added some Deda Superzero carbon bars, super light at 215g in a 42cm width and with an aerodynamic shape. The bar tape is Prologo's One Touch, and we've gone for a Prologo Dimension T4 saddle. What do you reckon, have we conjured up the ultimate dream build here? What would you add and what would you take away? Do let us know what you think in the comments, and in the meantime we’ll to be testing pretty much every part of the bike, from the wheels, to the the frameset and of course the new EPS gruppo!