Enigma introduced the Escape in 2017 and since then the British company has seen demand for gravel and adventure bikes grow, so this year it has updated the bike with bigger tyre clearance and a few other changes to keep it abreast of the latest developments. Here’s a shufty at the new bike before it goes out for review.

- 22 of the best gravel & adventure bikes — super-versatile bikes that are at home on lanes, potholed streets and dirt roads The appropriately named Escape isn’t the company’s first gravel bike, that honour goes to the old Ecroix, a bike born from cyclocross DNA. The Escape looks to have all the things we look for in a bike that is designed to be as at home on a muddy bridleway as it is cruising along a country lane.

The design brief for the bike says it all: "To create a drop handlebar bike without limits. It should be capable of sustained off-road use, loaded or unloaded. The ride should inspire confidence, with stable handling and maximise tyre clearance. It should be our most versatile model that can take on any conditions," says Enigma. 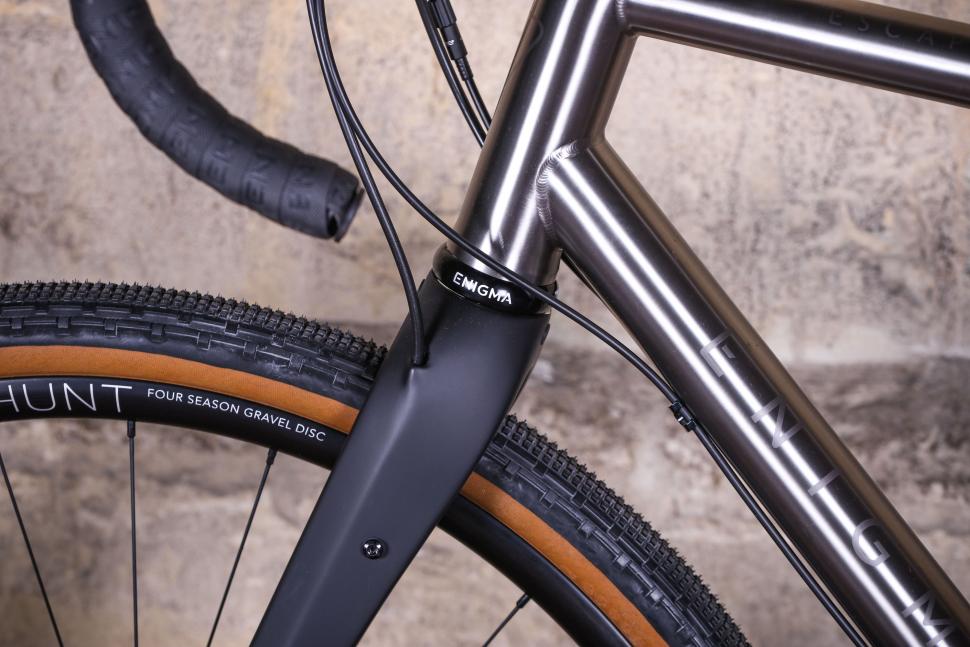 At its heart is a 3AL 2.5V titanium tubeset with size-specific tubing being introduced on this new model, a quite significant change and something we’re seeing a lot of big bike brands do. This has allowed Enigma to better tune the ride quality and reduce weight for each frame size. It has also improved the standover clearance on smaller models. 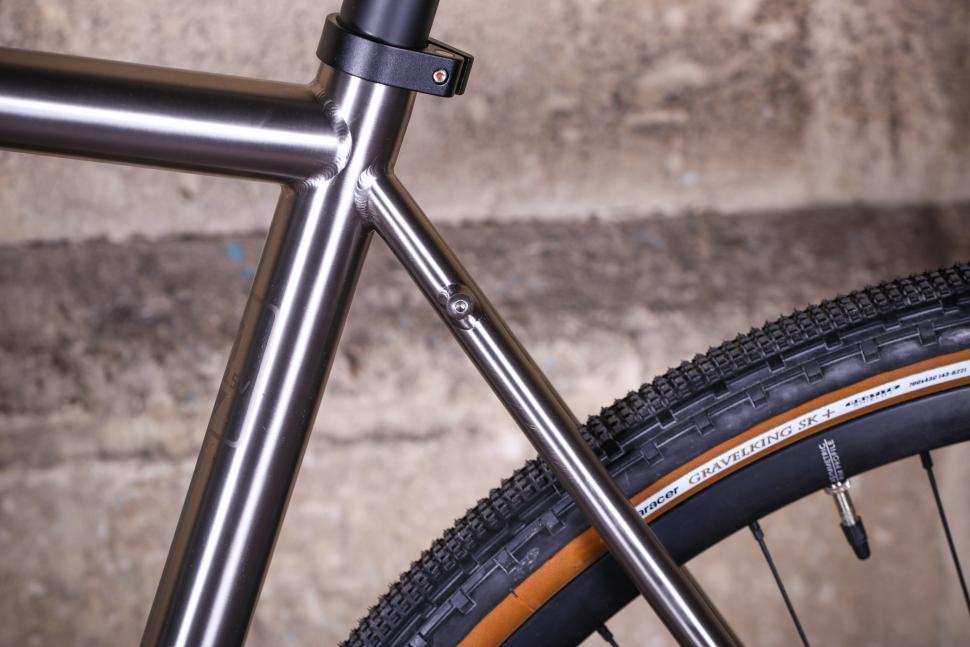 Tyre clearance has been boosted so it’ll now take 700x45mm tyres or 650bx50mm. It achieved this by increasing the chainstay spacing and developing a new fork. 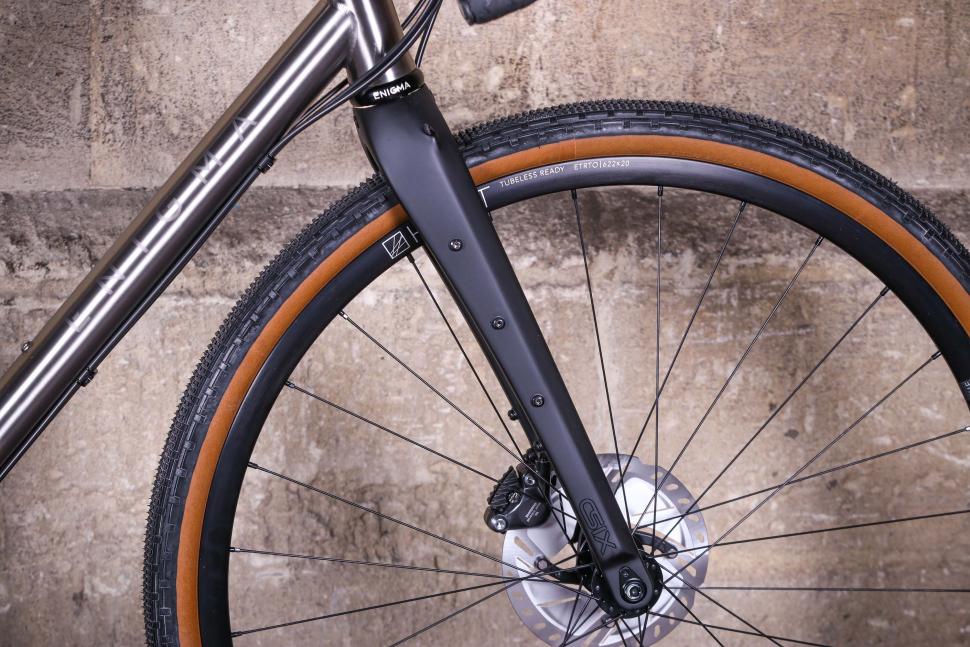 The carbon fork is brand new. It’s called the CSix and comes in two versions, with or without Anything cage mounts. Each fork has internal routing for the brake hose and a dynamo hub, so it just comes down to how much carrying capacity you want. A fork with uncut steerer tube weighs a claimed 435g. 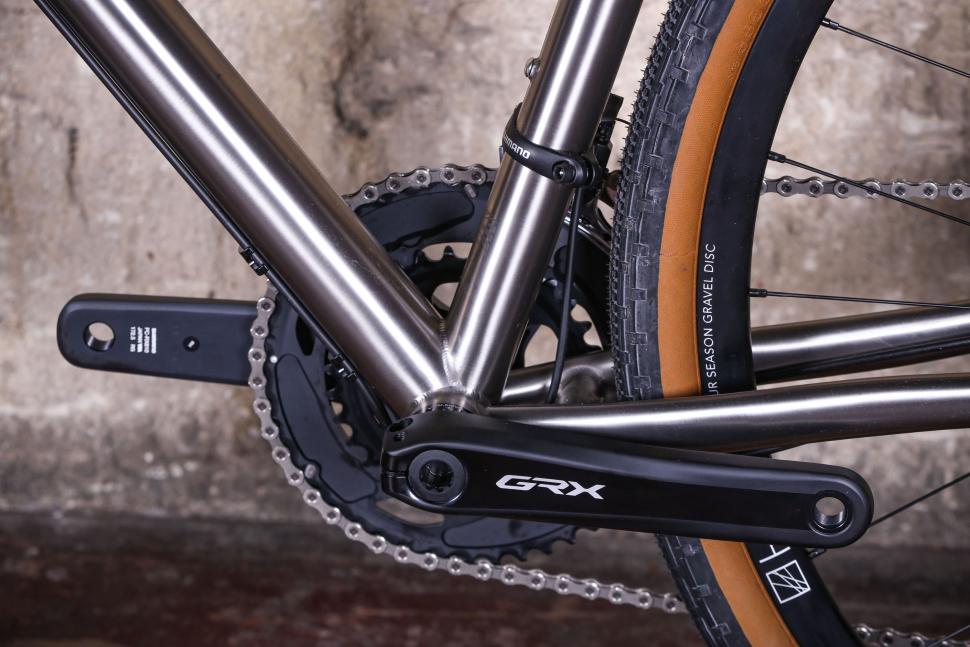 You’ll have spotted the external cable routing by now. Enigma chose this over internal routing because it feels it’s better suited to the riding this bike is going to be used for, where easy maintenance is desirable, whether it’s at home or in the middle of the wilderness.

Don't worry, the cables and hoses are very neatly routed along the frame, running under the down tube so they are out of sight at least. The frame is fully compatible with 1x and 2x drivetrains as well as electronic groupsets. 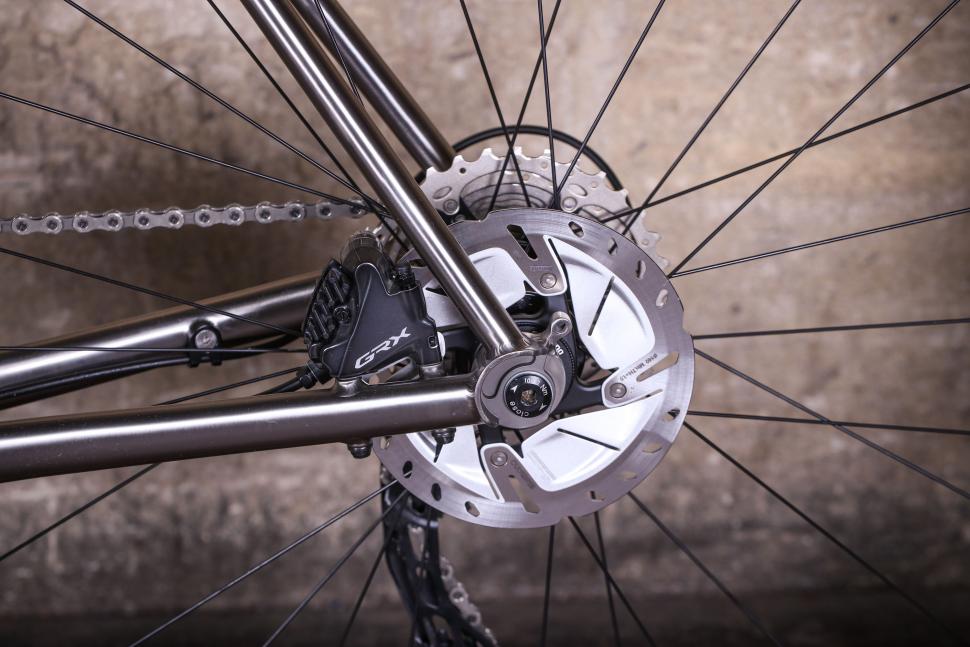 Versatility is an oft-used word when talking about gravel bikes, and it’s one of their great appeals. The Escape has lots of eyelets including for mudguards and racks, a third bottle cage and our test bike has a new fork with Anything mounts, a triple bolt system that allows a wide range of racks and bottle cages to be fitted.

Other sensible details to bring to your attention include the external threaded bottom bracket. Disc brakes are flat mount callipers with 12mm thru-axles. The frameset costs from £2,185 and complete bike like the one pictured here with Shimano RX800 costs £3,899. The groupset is a mechanical 2x setup with an 11-34t cassette and 48/31t chainset. Wheels are Hunt 4Season Gravel Discs shod with 38mm wide Panaracer Gravel King tyres and finishing kit, aside from the PRO Discover flared handlebar, is all Enigma branded with an alloy stem, carbon seatpost and Ellipse saddle. 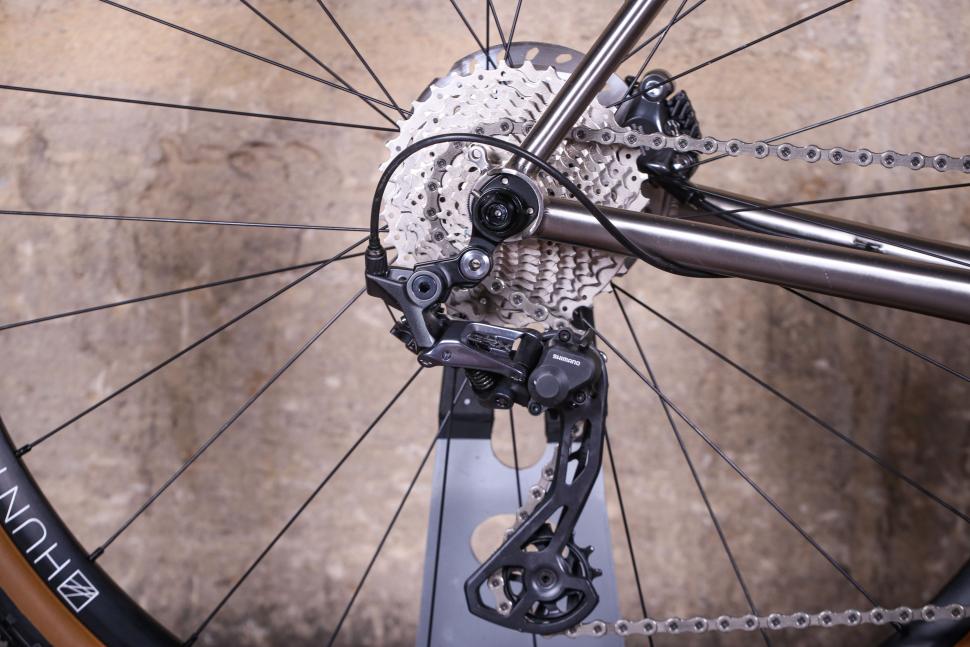 “The Escape draws on 14 years of titanium manufacturing experience and product evolution. As a rider coming from an MTB and touring background, I’ve particularly enjoyed testing and developing the Escape on the bridleways of the South Downs, seeing the original version prove itself on tours and endurance races worldwide. The updated model refines a successful formula for an even more versatile ride, suitable for a huge range of tyres, groupsets and to fit any size of rider. We’re proud to offer the Escape MKII as part of our 2020 range,” says Brand Manager Richard Lambert.

off.road.cc tested the previous version of the Escape back in 2017, where it got a very good review, so we have high expectations for this new bike.

- The best titanium gravel and adventure bikes you can buy