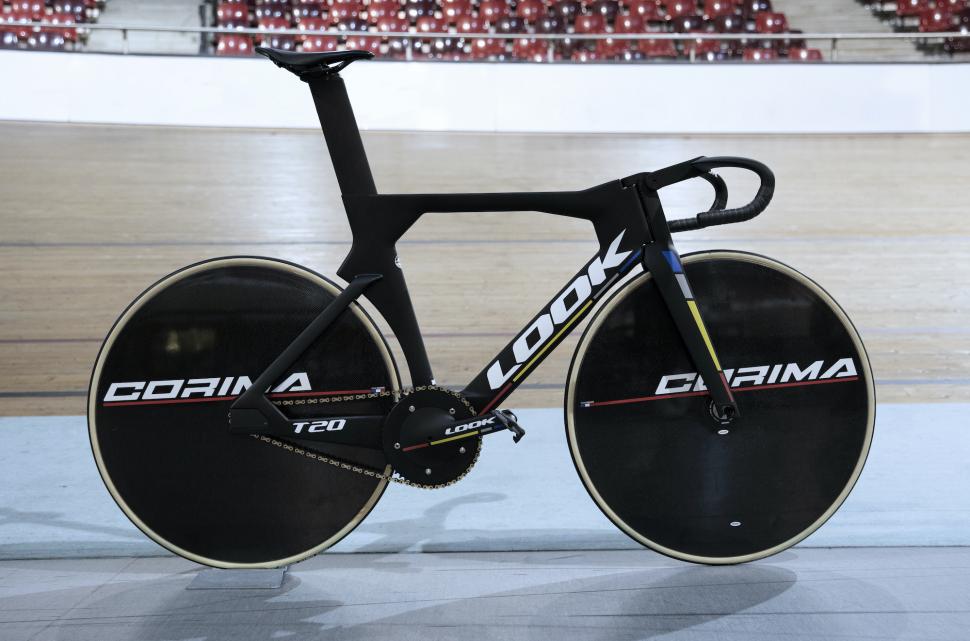 New T20 is lighter, stiffer and more aerodynamic than the model it replaces
by David Arthur @davearthur

Look has left it to the last day of the year to launch its brand new T20 track bike ahead of the Tokyo Olympics next summer. The new bike is lighter, stiffer and more aerodynamic, with a claimed weight os 6.8kg, and features new wheels with thru-axles developed by Corima.

The new track bike has been designed and developed in collaboration with the French Olympic track team and is made in France by Look using its own in-house carbon manufacturing facility. 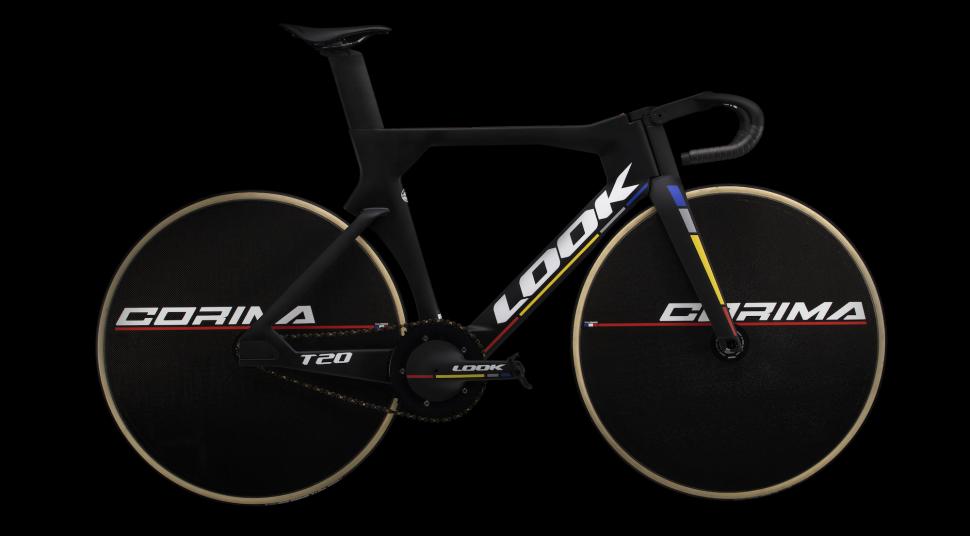 Look is keen to remind us of its Olympic success in the press release. “Since Atlanta 1996, LOOK has collected 14 Olympic titles, and 43 medals in total,” the company proudly declares.

The T20 is an evolution of the previous Look track bike and much of the development has been to increase the stiffness and lower the weight, improving the stiffness-to-weight ratio. It’s claimed to be 800g lighter, 25% stiffer at the bottom bracket, 12.5% stiffer in the rear triangle and 12% stiffer in the head tube.

With the radical Hope HB.T taking a daring approach to aerodynamics, there has been much anticipation to how rival Olympic track teams would respond. The T20 is anything like as radical, but it is claimed to be more aerodynamic than the bike it replaces, with a claimed 11% reduction in drag. 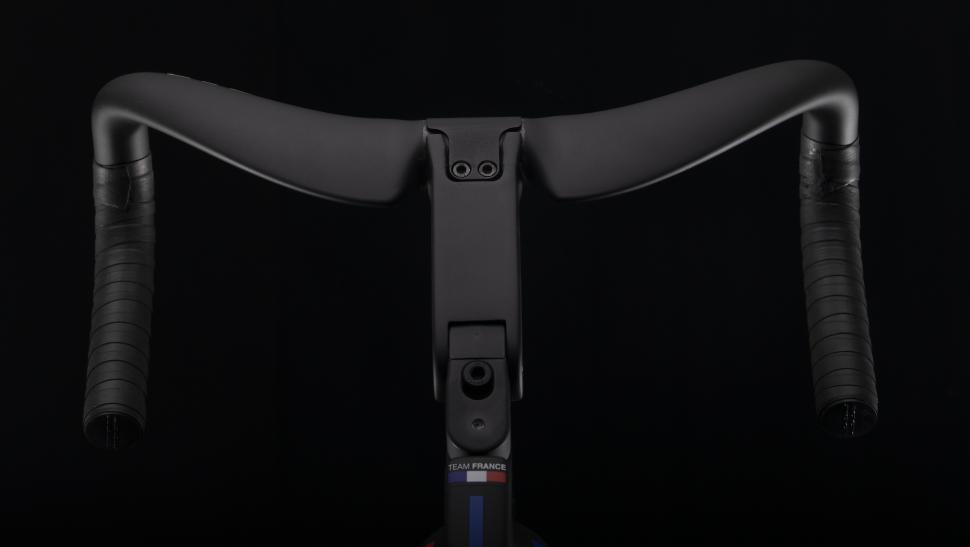 The result of all these changes is a claim from Look is for a gain of 30 watts at full speed on the track, which it equates to a full bike length in a 200m sprint. Look doesn’t reveal any more data on how it achieved these figures so we can only take them at face value.

The handlebar and stem have been designed to fit seamlessly with the frame, and Look has developed a very rigid handlebar for sprinters, Madison and scratch racers, while pursuit riders will benefit from Look’s own Aeroflat bars and Aergo extensions. Corima has been pulled in to offer a fully integrated approach with wheels developed specifically for the T20 frame and fork. Corma has developed new 4- and 5-spoke carbon wheels, as well as the Paracular and Lenticular monobloc wheels, that apparently optimise the T20’s aerodynamic profile.

Look and Corima have also developed front and rear thru-axle dropouts to ensure maximum stiffness along with improved aerodynamics. This integrated design leads to a claimed 12.5% increase in lateral stiffness.

The T20 will use the ZED carbon monobloc crankset first developed for the 2012 London Olympics which offers high levels of stiffness and easy crank arm length adjustment via the Trilobe technology.

“I am incredibly excited to race the T20 for the first time as I build towards the 2020 Olympic Games,” says Mathilde Gros, Tokyo 2020 Olympic Games hopeful and French Cycling Federation athlete. “LOOK has been a long-time partner of the French Cycling Federation, and that partnership has brought with it so many medals and victories over the years. I am looking forward to trying to write my own piece of history in Tokyo!” 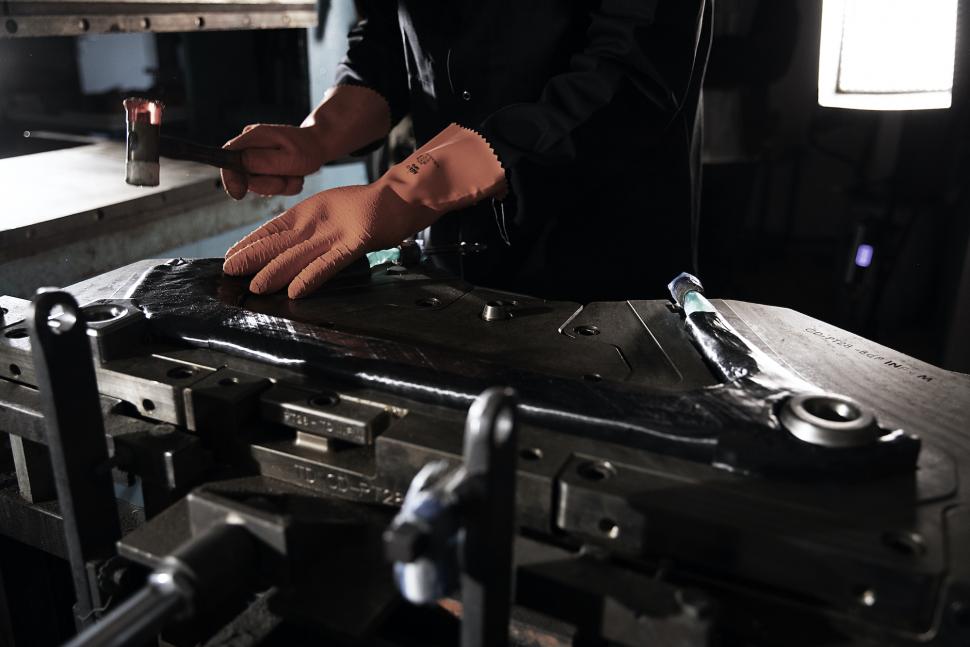 The new T20 sure looks fast, but we’ll have to wait till next summer to see just how fast it really is.