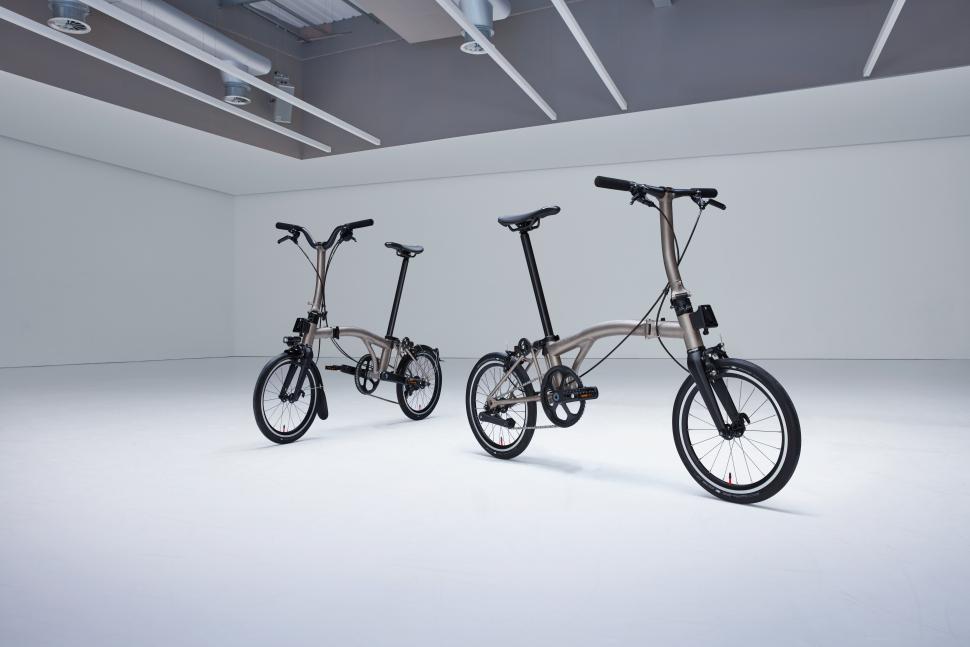 Brompton has redesigned its iconic folding bike to create its lightest version ever that - at 7.45kg - weighs a whopping 37% less than the original all-steel equivalent, “setting a new benchmark for folding bikes in lightness, ride performance and robustness” so Brompton says. 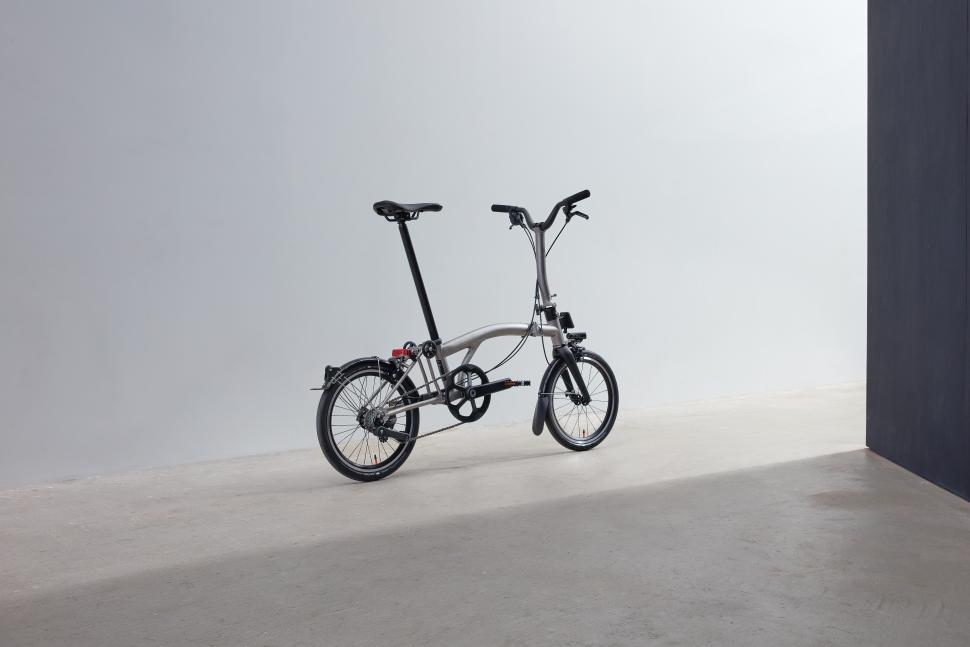 The new lightweight titanium Brompton T Line is the result of three years of development and research, and is available in a single-speed or four-speed spec.

“At the new facility in Sheffield, the frame is precision-engineered in titanium, then orbital and tig-welded for strength,” says Brompton. 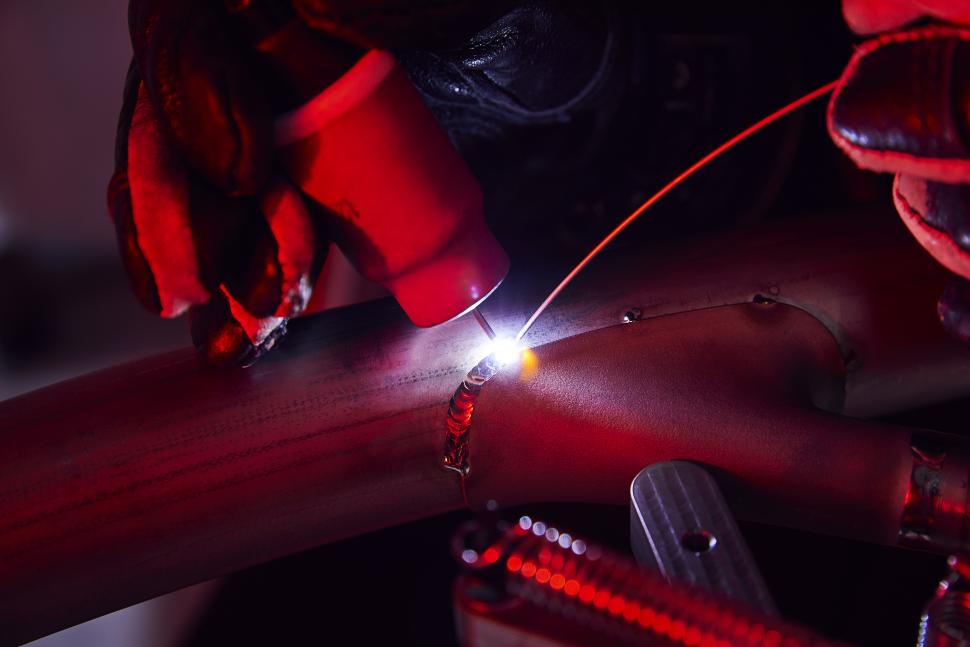 “The T Line is comparable to a carbon road bike, yet, it can be comfortably ridden by a 110kg rugby player and withstand the punishing impact of the city,” claims Brompton.

The new titanium model features a patent-pending drivetrain that has been designed ground-up to sit inside the fold, as well as to be as light as possible. 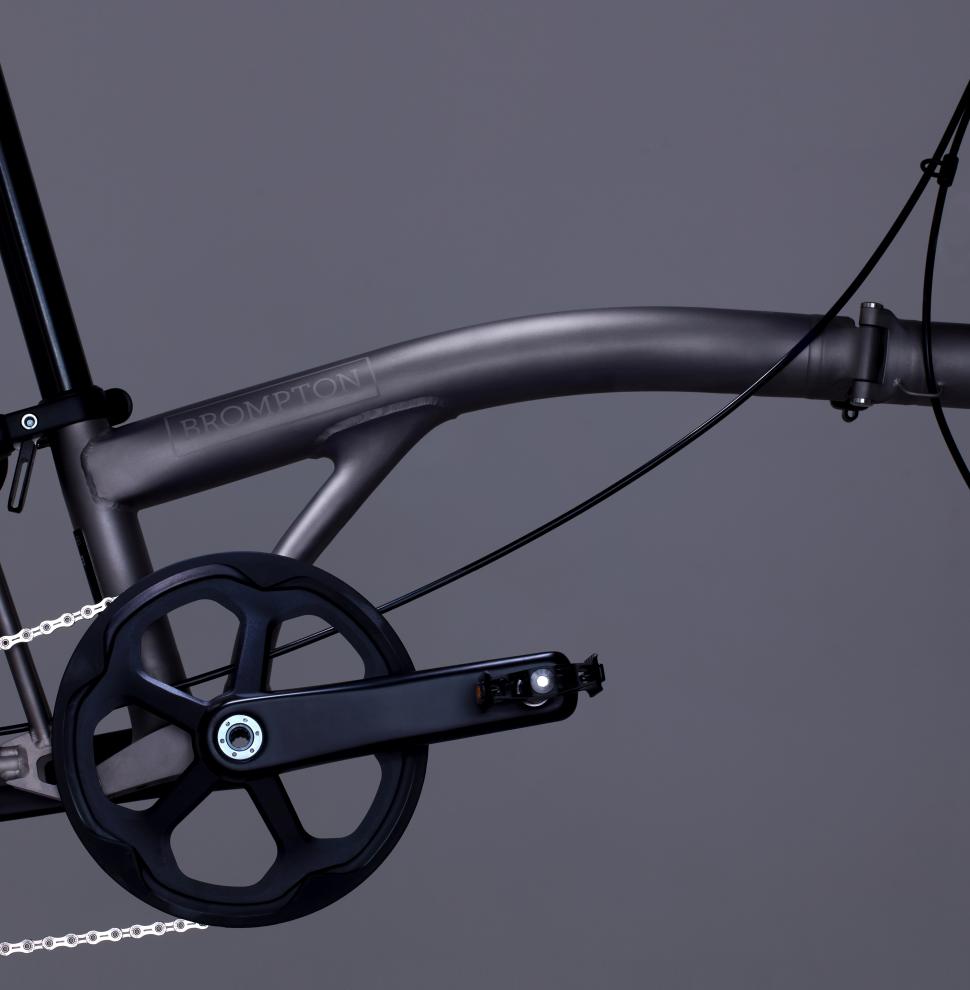 The carbon crankset has been included to save weight and “give greater power transfer”, while the 60g derailleur is said to deliver smooth shifting in a small package. The T Line Urban model also comes with a new gear ratio - it is equipped with a 50T chainring and 11-13-15-18T sprockets.

Brompton has also used Tubolito’s S-Tubo lightweight 34g tubes for folding bikes, which have a reduced wall thickness to save weight over standard butyl tube options. 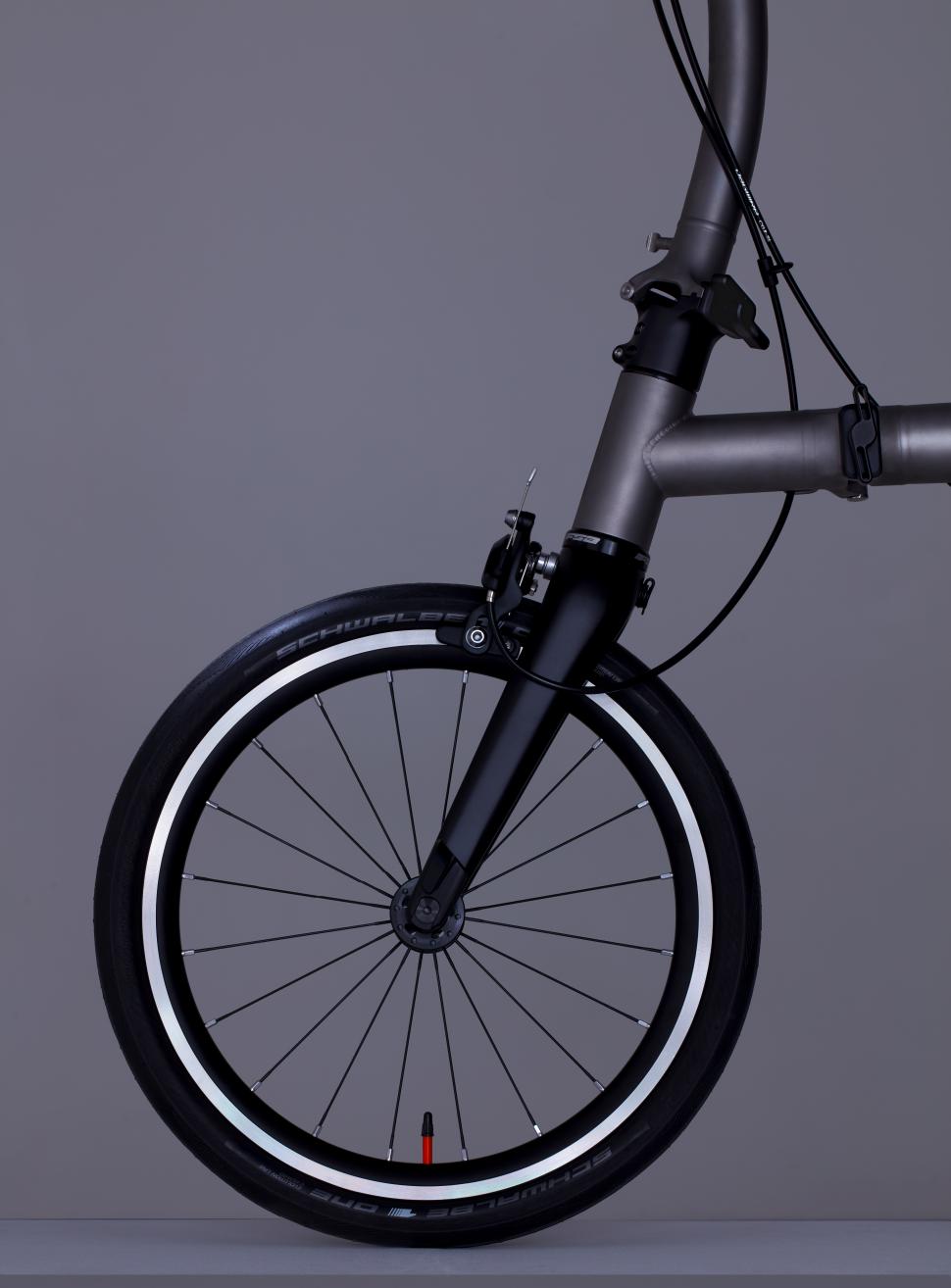 Another one of Brompton’s big claims is that the new T Line is the first bike in the world with a steel-armoured carbon seat post.

“Ordinary carbon seat posts are stiff, strong and lightweight, but they can't stand up to the daily use of a folding bike,” the brand notes.

“Brompton’s design engineers have developed a new process to reinforce the limitations of carbon with 0.3mm steel armour.

“The result is a superlight seat post that can take the abrasion of the fold, 110kg load and all-weather riding.” 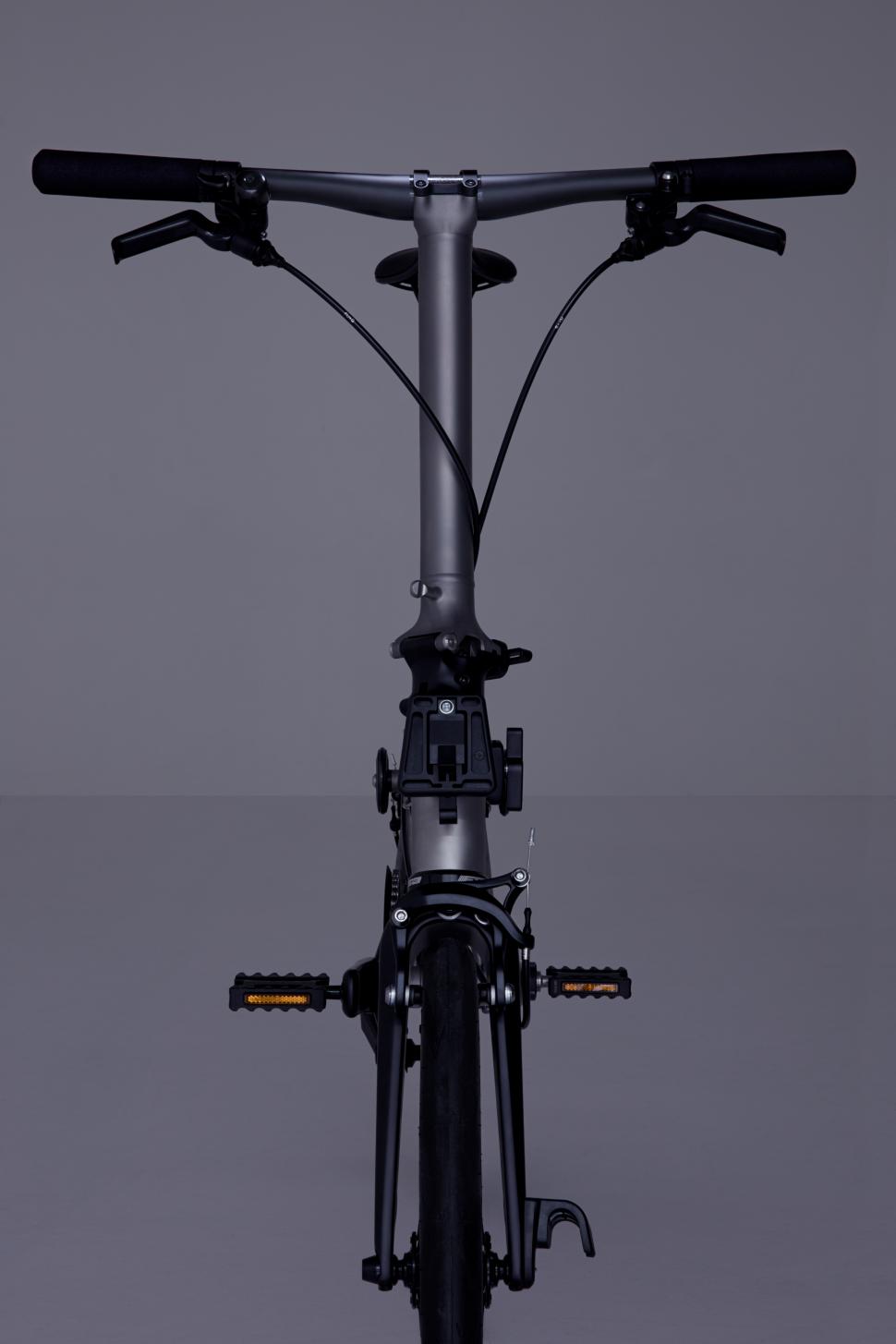 What else? Well, Brompton says it’s also managed to make this model faster to fold and easier to carry.

You’ve got new self-aligning hinges which, according to Brompton, are always "set-to-go". Then there’s the spring-loaded handlebar catch that is said to click effortlessly, and an easy-grab carbon saddle with an integrated nose handle. 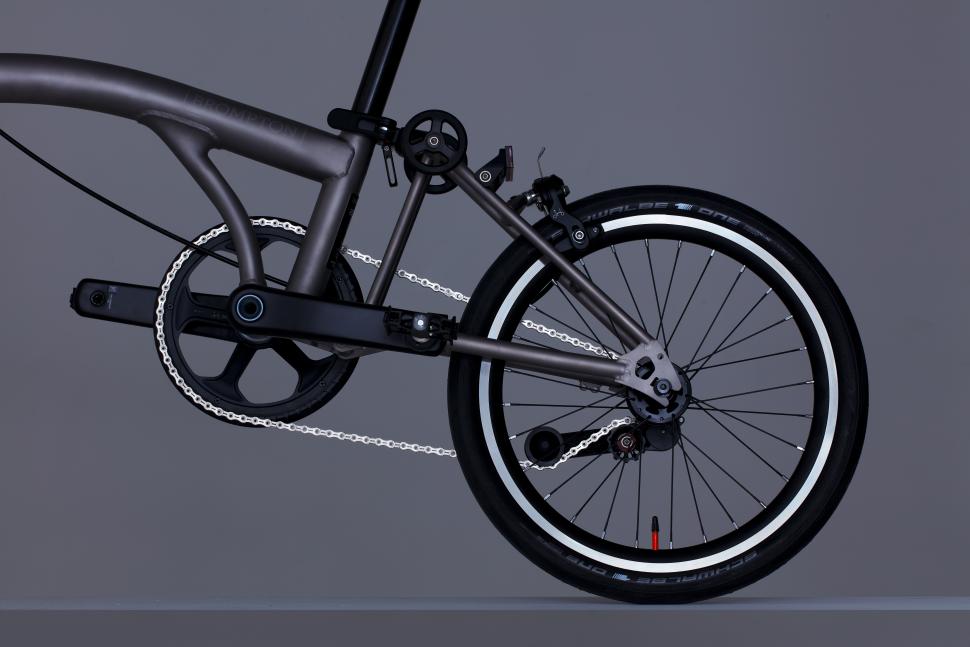 Perhaps leaving existing Brompton owners in a bit of a quandary (i.e. making every effort to persuade them to splash out on this new and improved version) Brompton boasts: “Nothing folds like this Brompton, not even other Bromptons."

“The one-piece carbon fork and wider carbon handlebars make it stiffer and even more responsive.”

The bike is available in two specifications, each with the option of a low and mid-rise handlebar fit:

The new Brompton T Line is exclusively available via a ballot system on Brompton.com, and through selected Brompton Junction stores including the one in London.