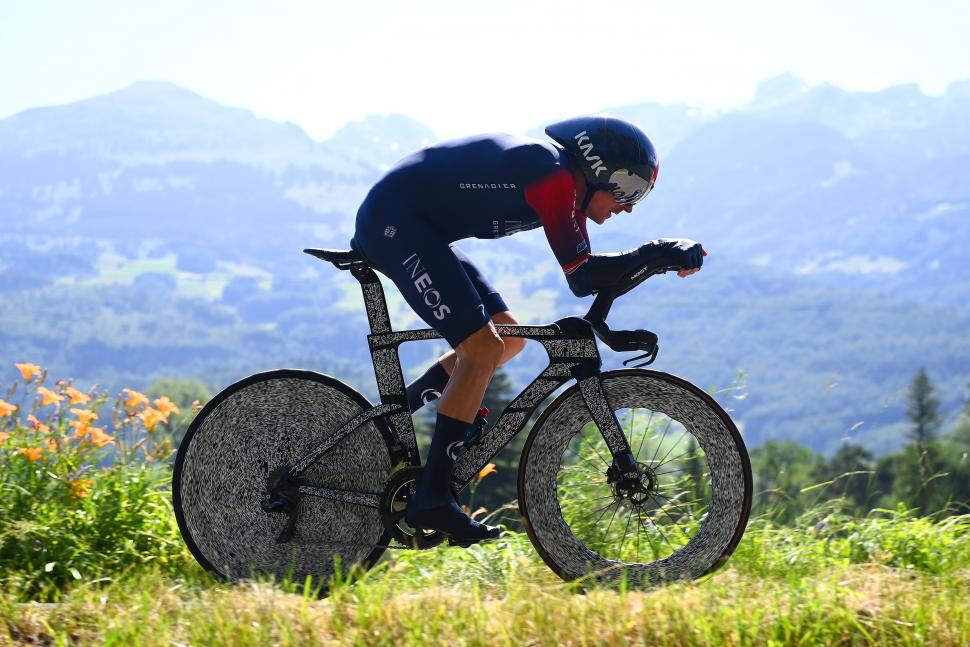 Pinarello's latest Bolide time trial (TT) bike is now a disc brake design, and the Italian brand looks like it has been paying attention to far more than just the brakes. The head tube and down tube have been redesigned, there's a new fork and the aero extensions may have been shaped to disrupt airflow prior to contact with the legs.

Geraint Thomas rode to overall victory in the Tour de Suisse with a dominant TT performance on Sunday. But while the Welshman being handy against the clock is nothing new, the bike underneath him was. This was our first proper look at the new Bolide after we saw spy shots last week.

Whether the move to disc brakes is one that has been taken for handling or aerodynamic purposes is unclear, but given the high development costs and low sales generated by TT bikes, we wouldn’t expect Pinarello to be producing a rim brake model as well.

Rather interestingly, the Most bar extensions start narrow on the base bar before curving outwards. They then come back into where the forearm supports sit. This could be an effort to disrupt airflow prior to it coming into contact with the knee, though it could also have a positive impact on comfort.

While this is the first Bolide TT bike to feature disc brakes, the triathlon version has used them for a number of years now with Ineos' own Cameron Wurf using the tri bike in multiple Ironman events.

The last update to the Bolide TT came way back in 2016 when Pinarello took lessons from Wiggins’ hour record to reduce drag over the original 2013 machine. But take a look back through the 9 years of Bolide bikes and you wouldn't see much of a change in the overall design.

Most of their rivals would argue that the likes of Ineos Grenadiers’ Filippo Ganna and Geraint Thomas don’t need any extra help to go fast against the clock. But we'd expect Pinarello to say that this new bike is faster than ever before.

Moving on to the aerodynamic touches, Thomas' bike appears to feature some heavy contouring on the down tube. The bulge that sits in front of the top of the bottle cage area is likely there to smooth the transition around the bottle

The head tube seems to start with a rather sharp edge before staying narrow through the whole depth.

The fork legs bow outwards rather dramatically, possibly in an effort to clean up or direct the airflow around the down tube.

The seat stays connect to the down tube well below the top of the wheel which we have seen done with a number of other TT bikes. The idea is that it removes as much material and therefore disrupts air as little as possible, hopefully reducing drag.

That’s about all that we can see for now, but with Thomas having now raced it ahead of July's big race, we’d expect to see the team on the new machine come the first stage of the Tour de France.