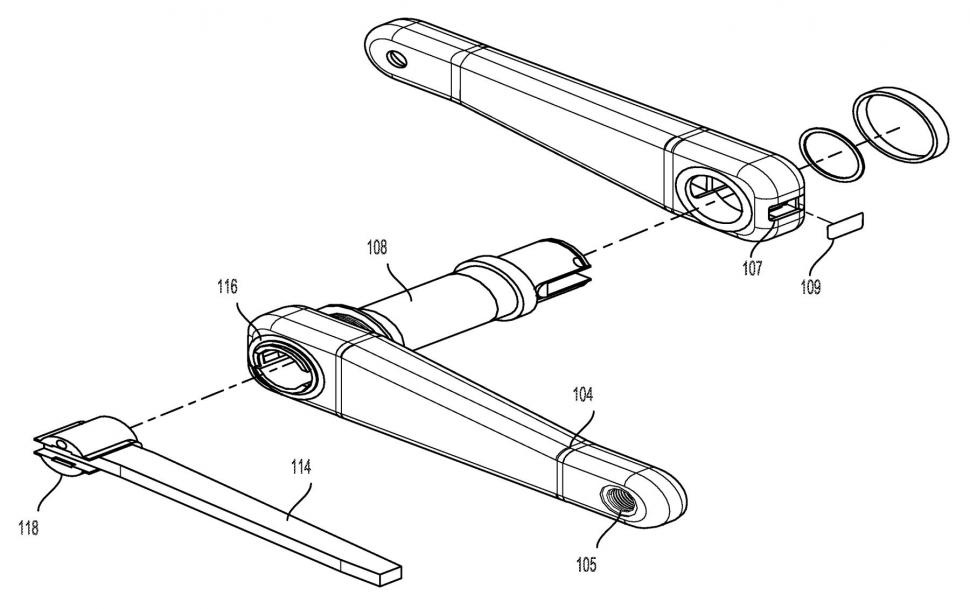 A US patent has been granted for a chainset with a spring action that, according to its inventors, improves cycling efficiency by more than 4%. Huron Cycling says that the spring action in its Impact chainset is comparable to that of the carbon plate used in recent record-breaking running shoes.

“The crank arms are not directly attached to the crank spindle, but can rotate by up to a few degrees,” says Huron Cycling.

“This rotation is counteracted by fibre composite springs inside the hollow crank arms.

“Depending on riding style, the Impact [chainset] improves cycling efficiency, especially when going uphill or accelerating, by reducing the effect of the dead spot during the pedal stroke.” 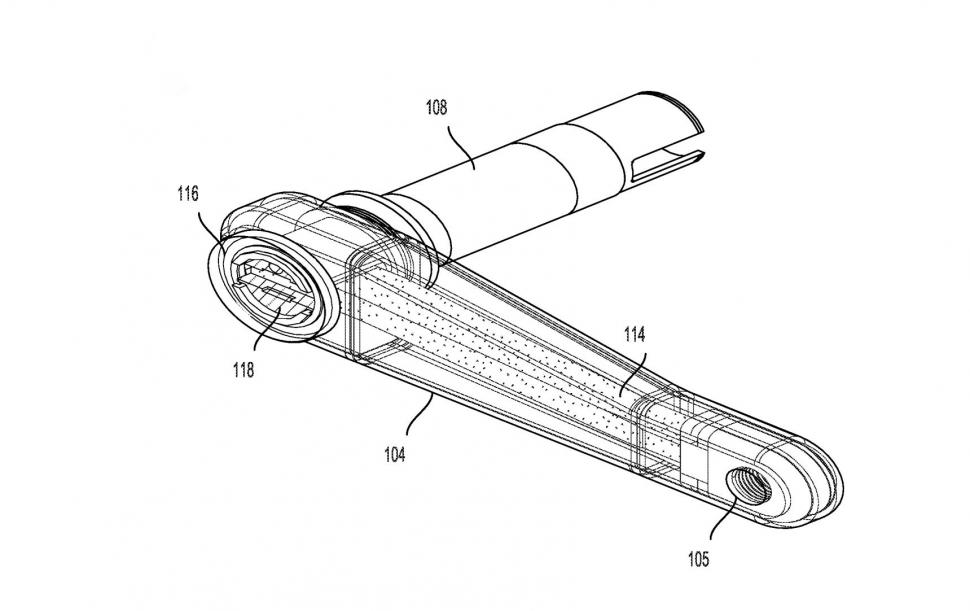 Although this patent has only just been granted, Huron Cycling has been working on designs that follow similar principles for a few years. You can read the detail on each of them in white papers published on the company’s website.

“The [chainset] stores energy temporarily during the downstroke and releases this energy in the dead spot of the pedal revolution,” says Huron Cycling.

“Both left and right crank contain limited spring action to achieve this goal. Under the load from the cyclist’s efforts the internal springs allow each of the crank arms to rotate by a few degrees relative to the spindle. Deflection at the pedals is up to 20mm and proportional to instantaneous torque. The energy stored in the springs is returned to contribute to torque at the dead spot of the pedal stroke.

“The overall result is smoothing of the torque profile and less fluctuating transfer of power to the back wheel.”

Huron Cycling says that its tests (you can read more about the methods and means of measurement in its white paper) demonstrate that “the Impact drivetrain improves cycling efficiency by more than 4% for a range of power and cadence levels”.

The tests showed that with conventional cranks an average of 197.2 watts was required to hold an average speed of 19.3km/h at a cadence of 71rpm for 30mins on a Tacx Neo trainer set at a 3% slope. The use of an Impact chainset is said to have reduced the power required to an average of 187.8 watts.

This video is intended to show proof of concept; it's not a commercial product. The new patent relates to an Impact chainset with fibre composite leaf springs inside each hollow crankarm.

Huron Cycling says that the improvement in cycling efficiency depends on each rider’s pedalling technique. If a rider maintained the same torque throughout the pedal revolution they’d see no benefit from using the Impact drivetrain, but everyone applies more torque on the downstroke than through the dead zones around the top and bottom of the pedal stroke.

Research published in Medicine & Science in Sports & Exercise supports the notion that the Impact chainset improves effective power during cycling.

Huron Cycling has also developed a power meter incorporated into an Impact chainset. Although this is not covered specifically in the patent mentioned above, earlier US patents 9,403,576 and 9,809,275 described prototype and proof of concept versions of both the chainset and power meter.

Rather than relying on strain gauges, the power meter uses rotary sensors that keep the cost down.

The power measurement is based on the fact, mentioned above, that the crank arms can rotate by several degrees relative to the spindle.

It says that a rotary sensor system measures this angle with an accuracy better than 0.1 degrees.

Huron Cycling says that its design “can measure left and right torque on Impact [chainsets] at 1500 Hz sampling rate [1500 times per second] with better than about 2% accuracy and low noise”.

“Torque profile, power and much more can be displayed in real-time on GPS cycling computers or smartphones using ANT+ or Bluetooth wireless protocols,” says Huron Cycling.

Will the Impact chainset become commercially available? Huron Cycling says that it partners with bicycle and component manufacturers to bring its technology to market so it’ll depend on whether there’s a take-up from the cycling industry.

"We have had discussions with several bike and component manufacturers so far, one of which has confirmed improvement in efficiency with its internal testing," says Huron Cycling's Willem den Boer.

"Our technology is initially aimed at performance cyclists who care more about details and maximising efficiency than casual cyclists. That would include racing.

If the Impact chainset makes it to production it might well be classed as a technical innovation by the UCI (the UCI says, "A technical innovation is defined as a new system, device or item of equipment that allows an improvement of a rider’s performance, adds new functions to the bicycle, modifies the bicycle’s general appearance or affects any other aspect of the UCI regulations”) and require approval before being used.

"It is too early for UCI approval, but it is interesting to note that conventional [chainsets] also deflect under load," says Willem den Boer. "Our crank arms just deflect 5 to 10 times more and return stored energy in the direction of rotation, so it is a matter of degree of deflection. There is no standard for the amount of acceptable deflection.

"We see this as similar to oval chainrings which, as far as I know, were not a problem for the UCI."