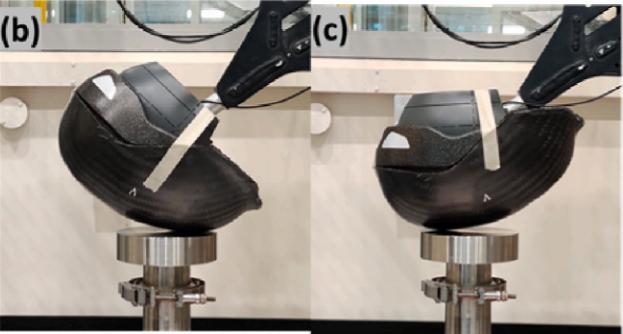 The outer shell is designed to absorb more energy so that around 40% less is absorbed by the foam underneath that’s in direct contact with your head, researchers say
by Anna Marie Hughes

Researchers have developed a composite cycling helmet “achieving enhanced safety” that they claim can cut critical injury rates by 12% compared to polycarbonate outer shells. This, the researchers say, is due to a new exterior made from Elium, an energy-absorbing thermoplastic resin reinforced with carbon fibre.

The new prototype helmet was developed by the French speciality materials company Arkema, in collaboration with researchers from Nanyang Technological University, Singapore (NTU Singapore). Elium has also been used on wind turbine blades, and Arkema claim it will "revolutionize the wind power, boat-building, hydrogen tank, and concrete reinforcement sectors" on its website. On the prototype cycling helmet, Elium replaces the conventional polycarbonate outer shell used in most helmets.

The idea is that the outer shell cracks on impact to dissipate energy across the entire surface of the helmet. The foam layer below then compresses and absorbs the bulk of the impact energy so that less is transferred to the head.

Speaking to The Engineer, Dr. Somen Bhudolia said: "When the helmet hits a surface at high speed, we noticed that there is a deformation along with the spread failure of the composite shell, which means the outer shell is taking more load and absorbing more energy."

"This is what you really want - the more impact absorbed by the shell, the less of it that reaches the foam, and so there is less overall impact to the head. We found that in existing polycarbonate helmets, about 75 per cent of the energy is absorbed by the foam. This is not ideal as the foam is in direct contact with the human head."

> How to choose the best bike helmet for you

According to the researchers, the new Elium outer shell has been found to absorb over 50% of the impact energy in tests, leaving the foam to absorb the remaining 35% - that’s around 40% less compared to conventional helmets.

Testing also shown the impact of this energy absorption difference on the severity of the injury in the unfortunate event of a crash.

Conventional helmets showed a critical injury rate of 28.7% and a fatality rate of 6%, while the critical and fatal injury rates with the Elium helmet are reduced to 16.7% and 3% respectively, according to the test results.

“The detailed manufacturing and certification tests performed on the helmets have shown a significant potential of using carbon/Elium composite shells as a viable alternative to the conventionally used material systems for helmets in terms of achieving enhanced safety,” it was concluded in the research paper.

The researchers and Arkema are looking to set up a commercial manufacturing process so brands can produce the helmets, and say finished products will offer the same level of protection as the current best helmets on the market. Weight-wise, for reference the researchers say the outer shell of a conventional polycarbonate helmet weighs 116g with a total weight of 230g, while the Elium-infused lid is 155g for the shell and 265.2g total. Prices would likely range between $100-$150 (£72-£108 approx).

The findings by the team have been published in a paper titled ‘Development and impact characterization of acrylic thermoplastic composite bicycle helmet shell with improved safety and performance’, in the journal Composites Part B – you can find the full study here, and you can read more about Elium here.

1
Near Miss of the Day 848: An overtake worthy of the 'must get in front' title
2
Victory claimed for harassment campaign by “mob of decent people” as helmet cam cyclist deletes Youtube and Twitter accounts
3
“People need to see justice being done”: CyclingMikey says camera cyclists suffer online abuse because some motorists “feel they have the right to drive how they want”
4
You've heard of a coffee ride - now Canyon uses real arabica coffee for new Speedmax CF SLX finish
5
Near Miss of the Day 847: Careless caravan close call causes cyclists concern
6
Mavic launches the Cosmic Ultimate as “lightest wheelset in its category”
7
Murder suspect in deaths of father and son killed while cycling released on bail
8
Fancy a 3D-printed saddle custom-made for your butt? Plus more tech news from DT Swiss, Giant, 3T, Chris King, Classified, Stages & more