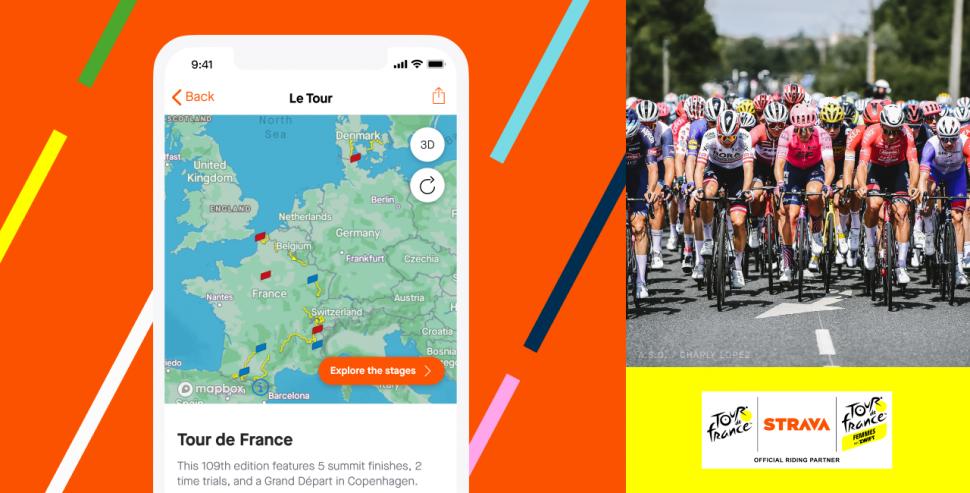 All Strava athletes will be able to check out race stages, follow the race action with official segments and analyse data from pro riders...
by Jamie Williams

Earlier this year Strava announced a three-year partnership with the Tour de France and the Tour de France Femmes avec Zwift, the first of which starts on Friday, 1st July. We sort of assumed that this would just be an area where pro riders could upload their rides, but today’s “Tour Hub” launch has revealed a fair few more features.

Firstly, as expected, all the pro riders' activities will indeed be collated in one place and if you’ve updated the app to the latest version, then you should already be able to see a banner at the top of the homepage.

Once followed, this will remain at the top until after the event, click it and you’ll be taken to the ‘Hub’. The majority of pro riders now upload at least some of their rides to Strava, so chances are you’ll be able to see activities from both your favourite male and female athletes competing this year. In fact, 71% of Tour de France riders uploaded their rides last year. This also means that you don’t have to follow the athletes individually, which from experience does clog up your news feed.

The good news is that the Tour Hub is accessible to the entire Strava community, so you don’t have to be a paid up subscriber. Obviously there aren’t any activities to view just yet though, they’ll get populated during the event which this year runs from 1-24 July for the Tour de France and from 24-31 July for the inaugural Tour de France Femmes avec Zwift.

When those activities do start appearing, you can expect to see all the usual stats such as time, distance, and elevation challenges. Maybe a few riders will even be brave and upload heart rate and power data too. Following last week’s update, pro riders, and the general public alike, can now also upload video footage to their rides, so look out for some of that as well.

> You can now share videos of your rides on Strava A feature that perhaps we weren’t expecting is the new complete listing of stages. This is something that you can see right now, and includes the exact stage routes including a 3D view. I’ve been having a play with this, and it does make it much easier to visualise stages, especially the ones in the high mountains. It also doesn’t make Stage 12 look any easier…

> Tour de France 2022 preview: everything you need to know

On those routes you’ll find some official segments: think Alp d’Huez, La super Planche des Belles Filles and Col de la Croix de Fer. Strava has curated the segments down to about four or five per stage as opposed to the hundreds that the riders will have actually ridden through, which makes it easier to find the most interesting ones and compare them to your own times. I don’t dare look… 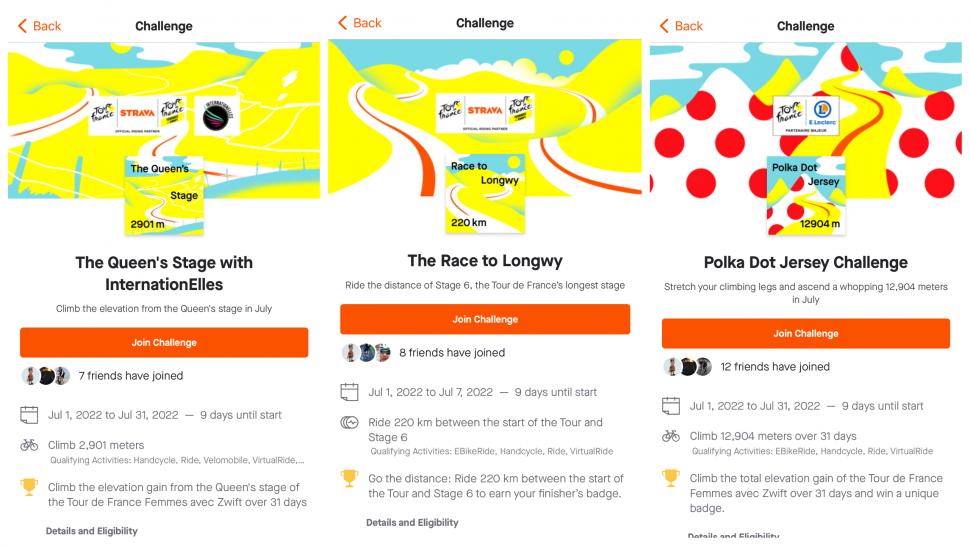 The final feature is the challenges section. There are five specific Tour challenges to currently choose from to suit a range of abilities, each lasting for the duration of July: 'The Race to Longwy' is the easiest, in which riders are challenged to ride 220km (the length of the longest stage). 'The Yellow Jersey Challenge' builds this up to 1,029km, which is the distance covered by the Tour de France Femmes avec Zwift.

If climbing is more your thing then 'The Queens Stage with InternationElles' might be up your street, challenging participants to climb 2,901m in July ( the elevation gain from the queen stage of Tour de France Femmes avec Zwift).

The fourth is the 'Green Jersey Challenge' of riding 1,200 minutes (supposedly the average power of a sprinter) and the final and most challenging is the 'Polka Dot Jersey Challenge', where riders have to climb 12,904m, which is the total elevation gain of the Tour de France Femmes avec Zwift.

As previously mentioned, you can enter the Tour Hub from the app right now and we’re looking forwards to diving into some data when the races hit the hills.

Is there anything that you think Strava should have also added? Or will this be enough to keep you busy whilst watching a six-hour transition stage? Let us know in the comments below…