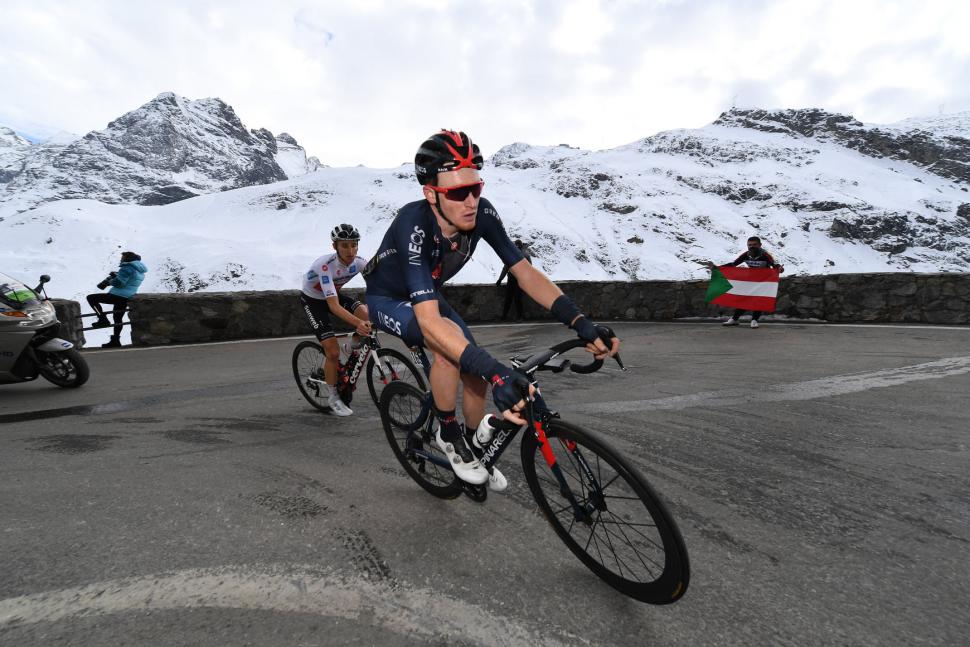 British Ineos Grenadier rider Tao Geoghegan Hart yesterday became the first rider in the history of the Giro d’Italia to win the race overall without wearing the Maglia Rosa. Here are the Pinarello bikes that carried him to victory.

The GC men hold station at the #Giro as @taogeoghegan leads the group home atop Madonna di Campiglio.

Geoghegan Hart’s road bike is the standard team-issue Pinarello Dogma F12 that he, along with his Ineos teammates, has been racing for quite a while now. It’s the same bike that Geraint Thomas rode in the Tour de France in 2019 and the one that Egan Bernal used to win that same race.

The F12 is the only bike that the Grenadiers use in road races, save for the occasional suspension equipped bike for the rougher cobbles of the Classics. As a result, the bike is used for flat days as well as in the high mountains, with the only change coming in the wheelsets.

The F12 frame, when it launched, claimed to shave drag by 7.3% over the F10 though given the way that road race bikes are becoming ever more integrated, especially in terms of cable routing, could this be the final big stage race that the F12 takes on?

Shimano’s Dura-Ace R9150 groupset provides electronic shifting with direct-mount rim brakes. It has been around for a while now and we’ve seen what could be the long-awaited update to Shimano’s flagship groupset.

For road stages, Geoghegan Hart looks to be using a standard 53/39, 11-28 combo, though this could be altered with a smaller front chainring and a larger cog in the rear for steeper mountain days. The Lightweight Meilenstein Obermayer boasts a claimed weight of just 935g for a set which we presume is a choice that Ineos makes to bring the F12 down to the UCI's 6.8kg minimum weight limit.

Glued to these are Continental Competition Pro Ltd tubulars in what we believe is the 25mm size (the F12 will take a 28mm tyre). While the road bike is pretty standard stuff, the time trial bike is where things get interesting with some non-sponsor components and a front end setup that is, for an Ineos Grenadier GC rider at least, a little on the basic side.

Fair to say @gannafilippo & @rohandennis finished in a different post code to the rest of the race today. Unreal scenes👏. We ❤️ you @pinarello_official BOLIDE. After today’s stage every Grenadier has finished top4 on a stage of this @giroditalia. Pretty cool & all in-spite of our leader Geraint having to leave the race last week. Onwards 🤘!

Geoghegan Hart’s gearing for the Giro’s second time trial of three in the race looks to be a 39/56 chainring setup with an 11-28 cassette. The time trial where the bike in Geoghegan Hart’s photo was ridden featured a significant climb so it could well be that the mechanics were busy changing the gearing before Sunday’s flat 10-mile TT through Milan.

Again, the Bolide is a design that obviously works rather well as it has remained unchanged for a few years now.

The front wheel is an interesting deviation from Ineos’ wheel supplier Shimano. The team looks to be using a Princeton wheel with a wavy design at the spoke holes.

The wheel in question is, we believe, the Wake 6560 which, according to Princeton, “has symmetrical front and rear rim profiles that each contain 24 sinusoidal oscillations, resulting a  revolutionary shaped rim varying between 60 and 65mm deep.” 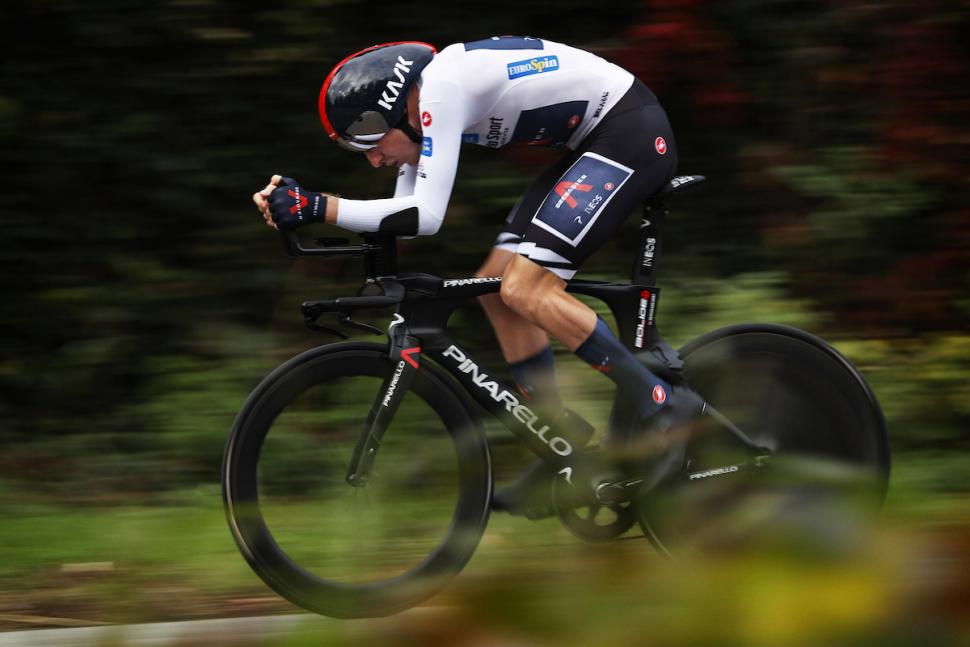 The rear wheel features a distinctive shape that eliminates the possibility of the wheel being a Pro wheel. The shape resembles an AeroCoach Aeox Ultra, though this is unconfirmed.

While Ineos has invested heavily in the front end setups of riders like Thomas, Froome and Gana who all get custom extensions and arm rests, this doesn’t seem to be the case for Geoghegan Hart who appears to have a standard set of J-bend extensions, though his arm rests look relatively well fitted.

After the host of changes that Tadej Pogacar made to his Colnago road bike for the thrilling penultimate stage of the Tour de France this year, Geoghegan Hart's setup looks fairly standard in comparison. Should you have deep enough pockets, these are two bikes that you can go out and buy. Looking forward, the Vuelta a Espana certainly has a lot to live up to in terms of drama, but what will the winner be riding into Madrid in two week's time?

1
Victory claimed for harassment campaign by “mob of decent people” as helmet cam cyclist deletes Youtube and Twitter accounts
2
Large vehicle may have crashed into controversial bike hangar, council says
3
167 cyclists – and just four drivers – fined in police crackdown during Tour Down Under
4
“Cyclists welcome – just in the right place”: Coastal path upgrades set to be shelved over concerns about environmental impact and “speedy cyclists”
5
Conor McGregor knocked off his bike... and gets a lift home off the driver who hit him
6
Fancy a 3D-printed saddle custom-made for your butt? Plus more tech news from DT Swiss, Giant, 3T, Chris King, Classified, Stages & more
7
Specialized closes inclusive women’s cycle clothing brand Machines for Freedom
8
Driver assaulted cyclist for questioning mobile phone use