The London Revolution is fast approaching – unlike my training goal. Will I be fit enough to get round? Well, if I’m not, at least I know I can call on help…

In complete contrast to my nervous training and worrying in the run-up to last year’s Dulux Trade London Revolution, a two-day, 186-mile circuit of the capital, this year it’s crept up on me and I’m seriously undertrained.

Okay, I know I can probably get to the first feedstop. My longest ride of 2018: 33 miles. A third of the first day’s distance.

A bit like cramming for exams, I know it’s too late now. I’ve got one more weekend to go out and try to extend my mileage, but really I’m hoping a kind of residual fitness from last year’s training, plus a bit of running and daily dog-walking will get me through. You get fitter as you ride, don’t you?

But what if you don't? What if you need someone to lean on and motivate you when you’re tired, struggling, fed up?

Well, as my husband Simon and I found out on a long, straight, windy and busy section of A-road on the Deloitte Ride Across Britain in Cornwall last September, there are these lovely people ready and waiting to help you out: the Threshold chaperones. I never found out his name, but when one such knight of the road appeared in his Threshold jersey and offered us a tow we happily tagged along until we’d reached smaller, quieter roads and were happy to let him go off and help someone else in need. 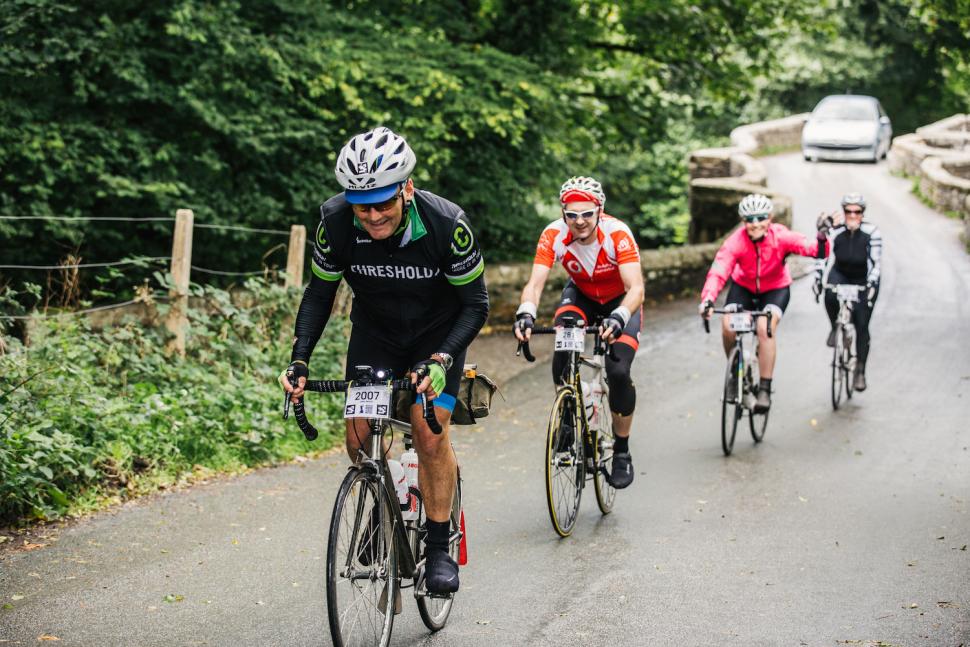 So what makes a chaperone pick up the baton?

One Threshold chaperone I do know the name of is regular road.cc kit reviewer Sean Lacey, so I thought I’d quiz him… 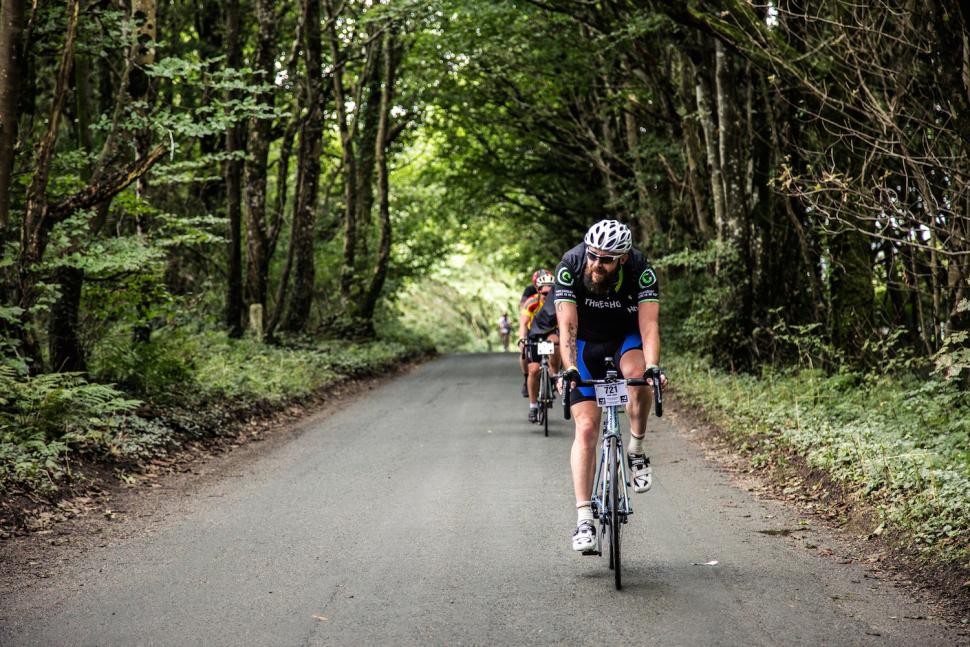 First off, what is your role as a chaperone?

Sean: We have many tasks out on the road, but the primary role is rider safety – these events attract large numbers of riders of varying skill and experience, so we ensure, where possible, that the best practices and road etiquette are adhered to or, where necessary, taught to the newer riders to make a pleasant experience for everyone, riders and other road users alike. We come from all walks of life too, which can help here and there with various useful skills.

We try to spread out throughout the riders, but most of us tend to work towards the back third where we are most needed, and two of us always run right at the back as sweep riders. Aside from that, we promote group riding on the multi-day events to promote easier and more social riding, assist with medical and mechanical issues, and every now and then give a helping push up a hill or two and plenty of encouragement!

What was the first chaperone role you took on?

My first Threshold chaperone role was on London Revolution in 2015. It was an interesting experience, quite different to the Ride Across Britain events I’ve since worked on as it’s a relatively short two-day event, so the focus is on the safety and support aspects of the role.

It was something of a baptism of fire too, as on the first day, 25 miles or so into the ride, I found a chap sitting in a driveway halfway up a hill. I stopped to see if he was OK and we carried on together for a distance until, at the top of the climb, he collapsed. Another rider stopped who was a doctor who also checked him over, but as I was calling in for medical assistance he remounted and rode off, only to collapse further down the road but this time losing consciousness.

With an ambulance on the way and our motorbike medic on the scene, he came round and it turned out he had a history of serious health issues, and was in severe risk. We found out he recovered after a few days in hospital, but it was an eye-opening introduction to the job for sure.

What do you reckon ‘qualifies’ you to be a chaperone (and did you have any worries about this when you first started)?

You need three things in the main – strong legs, experience and a social personality. It’s no good taking on the role if you can’t ride the distance and fairly strongly. The riders are looking to you to be the lead, take the wind and get them through the days, so it’s no good if you are the one they are waiting for at the top of the climbs.

Then there is experience – most of us are long-serving club riders (and occasionally, ex-professionals) with vast amounts of experience both in rider etiquette, either solo or as part of a group, and dealing with most roadside breakdowns with potential quick-fixes.

Lastly, you need to be a friendly face, able to talk to people and be somewhat selfless – you are riding for others, not yourself, so the pace and frequency of stops can mean some long days and late evenings, which impacts on your recovery time as well as your group’s, which needs to be managed as best you can.

Also, always have a smile on your face! For my first chaperone role, as I talked about above, I was a little nervous but I find the role quite natural; that’s how I was asked to be a chaperone after I helped lead a group in 2013 while riding as a journalist. So 10 minutes in I was right at home, and have enjoyed it, relishing the opportunity ever since.

What is it that keeps you volunteering?

Two reasons mainly: Threshold’s events are fantastic to work on, brilliantly run and there’s a great camaraderie within the crew and riders. Secondly, the privilege of riding these roads is a major draw, sharing the experience with so many others and knowing that to some at least you have made a big difference in how the event went for them.

We’ve had lots of riders comment ‘I wouldn’t have made it without you guys’ and there is a huge sense of achievement in seeing them cross that line at the end.

Oh, and on the Ride Across Britain the food is way better than I get at home! 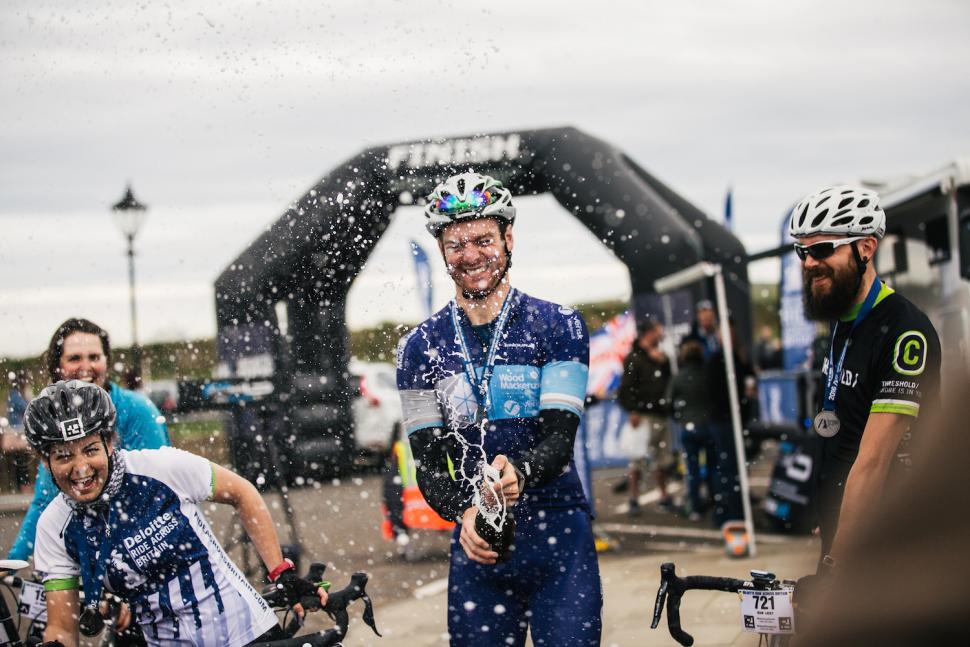 Ah, it’s hard to pick to be honest. As a chaperone I’ve covered one London Revolution and three RABs, and all were great experiences. I think if pushed I would say the 2016 RAB. I had a small group going and a fellow chaperone, Andy Fry, also had a small group. We met up on the road on day two or three and the two groups got on so well that we worked together with the larger group for the rest of the trip. They were a great bunch, constantly singing as they rode (or shouting at us to “ease off a bit!”) and the weather was cracking that year. I remember it well.

Last year was great too, another lovely bunch of riders who stuck together throughout despite the testing and complete opposite of 2016’s sunny conditions.

Echoing the last question, there really isn’t a worst. I’ve had bad days; I remember in 2015 on the long day seven of RAB I was shot. My legs just weren’t having any of it and I felt terrible, hiding it from the riders was hard. I had to ride a lot of that day on my own as I just couldn’t work for others much. Oddly though, the following day I was right as rain and back on it.

Going back to last year, we had the worst weather in the 10-year history of the event. It rained EVERY day, and it was unusually cold for the time of year too. Although I got through the ride OK, battling the wind, rain and muddy campsites, it caught up with me afterwards, giving me a four-month chest infection which I’m just about over. That lost me most of my fitness as I had to stay off the bike over winter, but I’m enjoying getting some miles in now ready for London Revolution in a couple of weeks, and hopefully my fifth Ride Across Britain in September.

What would you say to anyone thinking about becoming a chaperone?

Take in what I’ve talked about above. It’s not an easy job – it might look like just riding your bike, but you are there to work for others, not yourself. Ideally you will have ridden LEJOG/JOGLE before so you know you can cope with the miles, and been involved with a club or other organisation so you know how to ride in groups safely and courteously.

It is a super-rewarding experience, though. I don’t really see it as work, rather a huge club run where we are all members looking out for each other. What advice would you give to someone taking on a challenge? What reassurance could you give someone who, perhaps, hasn’t done all the training they ought to have…

Always remember – put in the best effort you can and you will manage almost anything. Regularly on Threshold events I’ve worked with riders who end up completing RAB when they only started riding earlier in the year, and I’m always incredibly impressed with their achievement; it shows that with determination it can be done.

Do try to stick to the training plans, but don’t panic if you can’t – just do as much as you can. If you are truly stuck and haven’t managed to get much training in at all, don’t despair, you will likely still finish. Remember, you are here for the ride, you have all day – there’s no work to get back to, or family meal; it’s just you and your bike. Take your time, pace accordingly and maybe have an extra couple of minutes’ break when you need it, but be mindful of the cut-off times!

Fuel well, keep your fluids topped up and try to ride with others; time and miles will fly by with someone else to chat with and slipstream. Most of all, enjoy the ride.

* Entries to this year's Dulux Trade London Revolution, on 12-13 May, close on Sat 5 May so you might have missed the boat, but there's always next year: find out more here

* Fancy riding from Land's End to John o'Groats in September? There are still a few places left on the 2018 Deloitte Ride Across Britain – sign up here