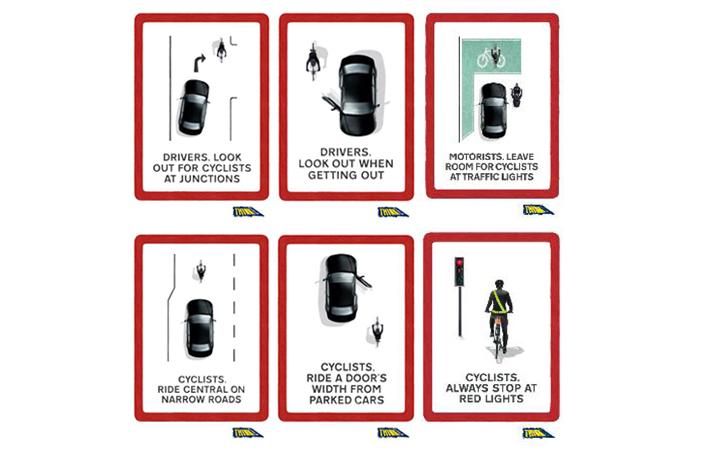 Poster campaign to run in five cities, but did it change driver behaviour first time round?
by John Stevenson

Last year’s ‘THINK!’ safety poster campaign is to be repeated after what the Department for Transport claims was a successful run last Spring.

The posters, which warn cyclists and motorists to look out for each other, will run for four weeks in Birmingham, Bristol, Cambridge, Leeds and Manchester.

The campaign originated in London last Spring before being rolled out from October in the five cities where statistics show the highest rates of traffic collisions involving cyclists compared to population.

The DfT seems to judge the success of the campaign on analysis that showed that almost two-thirds of drivers agreed the adverts reminded them about the importance of looking out for cyclists.

However, the DfT has presented no evidence that the posters actually changed anyone’s behaviour.

In London, where the campaign started, 14 cyclists died on the roads in 2013, the same as in 2012. While the number of deaths is too small to provide a reliable metric of cycle safety, the ratio of cycle journeys to collisions causing serious or fatal injury in London has worsened in the last several years.

The choice of cities intriguing as it combines two towns at opposite ends of the spectrum of UK bike use. In Cambridge, an estimated 18-20 percent of all journeys are made by bike (aka modal share, jargon fans), so it’s not surprising that it has a high rate of collisions involving cyclists relative to its population.

Leeds, on the other hand, has a cycling modal share estimated at around 0.5 percent. For it to be in the top five cycling collision black towns implies a staggeringly high rate of crashes in the motorway city of the seventies. Leeds is also, of course, host the the Grand Départ of the Tour de France, which is likely to be the only time in living memory anyone riding a bike round the town centre will feel safe.

Announcing the renewed poster campaign, Cycling Minister Robert Goodwill said: “We have some of the safest roads in the world but one cyclist’s death is one too many and we are determined to make our roads safer.

“This new poster campaign builds on the success of last year’s work to remind drivers to take care around cyclists and remind cyclists to be extra cautious around vehicles. This message is especially important as the weather improves and more people take to their bikes.”