Our shiny new Garmin has landed at road.cc HQ. We've had a quick look over it and set it up to go...
by dave atkinson

Incoming! We've just got our hands (for more than a lend, this time) on the new Garmin Edge 1000 GPS computer. It's bigger and screenier than the 810, and there's quite a few improvements which we ran through in the launch story, but let's have a quick recap of the main changes.

It's a bigger unit (although it's also slimmer), and the screen is bigger, though Garmin are sticking to LCD which has less power drain than the OLED screens of smartphones. That means more detailed mapping. Talking of mapping, the 1000 comes bundled with cycle-specific mapping covering the whole of Europe if you buy the Edge in the UK, and you can also get OS mapping on it like you can with the 810. The Edge 1000 can plan you a route in the same way that the Edge Touring or the Mio GPS units can: just tell it how far you want to go, and it'll come up with some options.

Garmin are going after Strava by incorporating segments into Garmin Connect, and the Edge 1000 is built to bring that information to your bars in real time. We ran a story on the updated Garmin Connect just the other day.

The Edge 1000 can do more with your smartphone too. In comes a low-power Bluetooth 4.0 chipset, and the Edge 1000 is capable of receiving push notifications from your phone. Well, your iPhone, currently. Who's calling, texts and the like, if you're the kind of person that likes to stay in the know when you're out on your bike.

Another thing the Edge 1000 is designed to talk to is Shimano's D-Fly widget for Di2, so you can get gear information on the screen of your Garmin. The D-Fly is scheduled to land in the UK some time in June.

So what have we got? Well, first up there's the unit itself: we have the £499 bundle that gets you three bike sensors too. Here's what we found. 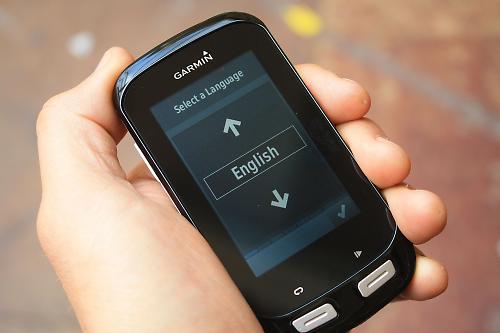 The Edge 1000 is a fair bit longer and wider than the previous top-end computer, the Edge 810. 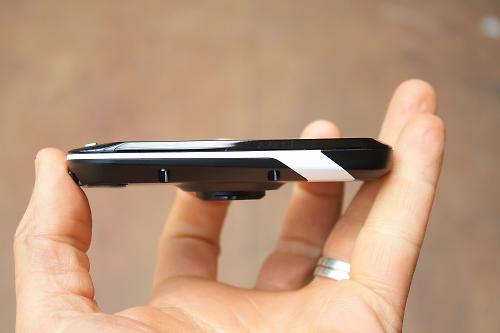 As you can see though, it's quite slim. Whereas the 810 was quite chunky, the 1000 has more of the form factor of a smartphone. Well, a chunky smartphone. On the back there's the usual quarter-turn mount... 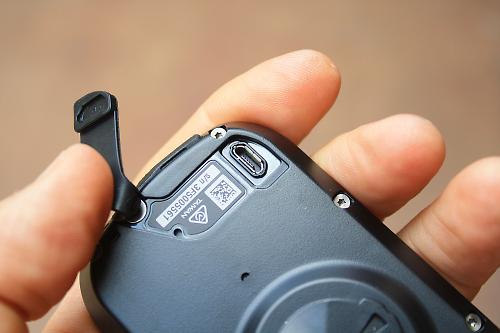 ...and a Micro USB port (instead of the Mini that the other Edges use) covered with a sealing rubber flap. The Edge 1000 is fully waterproof with sealed ports, but you don't want road gunk in there. 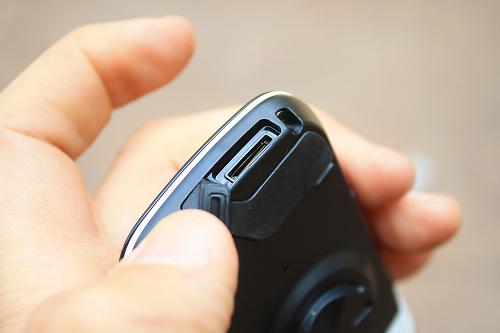 On the side there's a Micro-SD slot for mapping. Ours is empty as we'll be trying the unit with the mapping it comes with first, but we'll also try the OS maps from our Edge 810. The box contains both a standard stem/bar O-ring mount and the new out-front mount, which retails for £29.99 separately.

Garmin also sent us a silicon cover; they're £7.99 and available in a range of colours, one of which is, erm, pink. Well, it is the Giro time of year so we guess it's apt.

It covers the whole unit to protect it from knocks, but you don't have to take it off to charge as there's a cutaway on the back for the USB port. All the buttons can be activated through the skin.

The first thing the Edge does, as ever, is to ask you how you want basic information displayed – language, units, time format – before getting a bit more personal and taking some basic measurements which it uses for its calorie algorithms, among other things. Once you've done that there's a few more bits and bobs of initial setup, although it's worth noting that the Edge 1000 will work straight out of the box without touching any of these. Sensors is next. As you can see, ours came already paired with the sensors so we're good to go. Let's have a look at them, because they're a bit different to before.

The HRM is familiar enough, with the transmitter clicking onto the strap with two buttons. 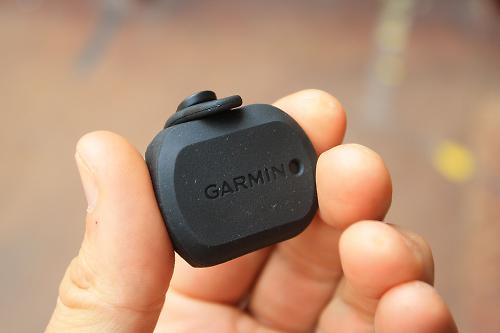 The speed sensor is new though. This and the cadence sensor are accelerometer-based, so there are no magnets, you just sling them on. The speed sensor is housed inside a silicone coat that acts as the strap, just like a Knog blinky. To fit it, just lob it on your hub. 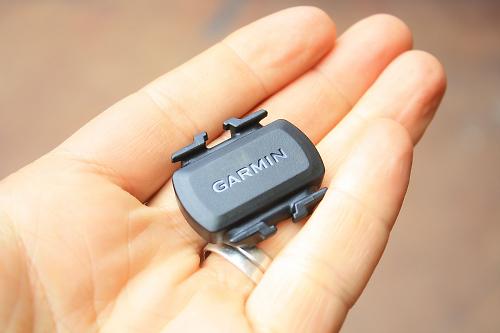 The cadence sensor goes on the the back of your crank, of course. Again, there's no need to line it up with a magnet. 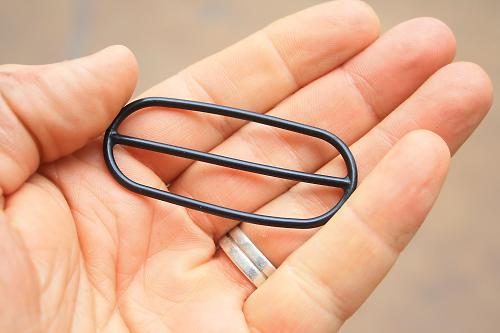 You get various lengths of mounting strap; clearly it's not an O-ring. Maybe it's a Theta-ring? The middle bar helps to mount the sensor parallel to the crank. 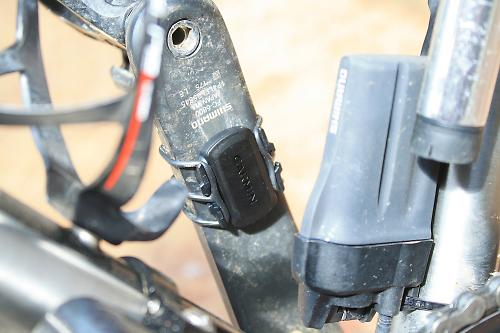 Here it is on the back of my slightly messy crank. 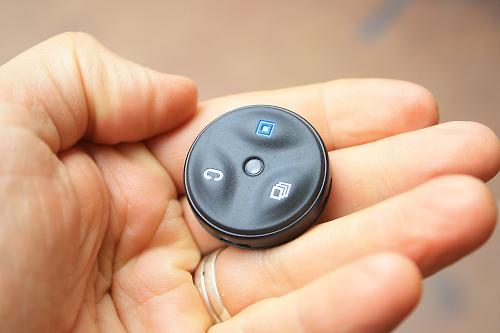 You can, of course, use the Edge 1000 without either the speed or the cadence sensor, with the speed measurement coming from GPS.

Garmin sent us something else that we could pair: the remote. This costs £39.99 on its own, and allows you to stop and start the timer, record lap points and switch between screens without taking your hands off the bars to jab at the screen of your Edge. 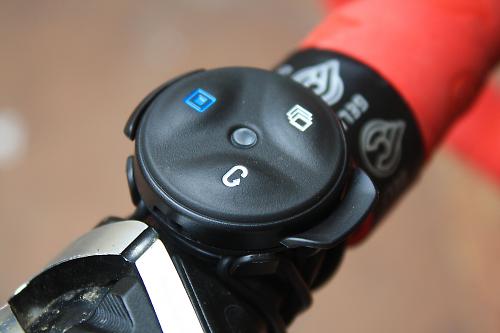 It comes with two mounts, a solid plastic one for MTB and an O-ring one for the road. Here it is in situ. 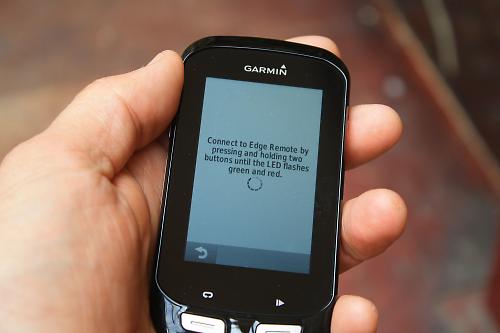 Pairing the remote and the head unit was straightforward: you just hold down a couple of buttons and wait. 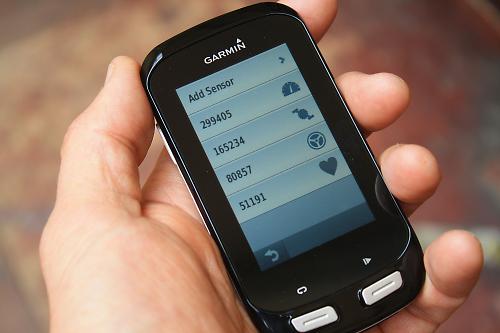 Once you've done that the remote appears in your sensor list. Sorting out your profiles is next. The Edge 1000 comes pre-loaded with two (Race and Train) but it's easy to add more. Because of the larger size of the screen, any data view can have a maximum of 10 metrics on display at any one time. That is a lot of info, especially as you can set up five different data screens for any one profile. Tapping on any metric in the setp gives you the full list of metrics available, so you can choose exactly what you want. 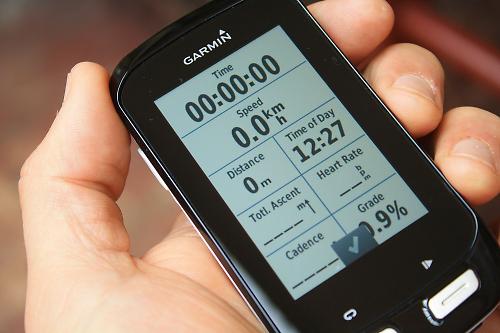 I've gone for eight metrics here, including heart rate and cadence and some climbing-related ones 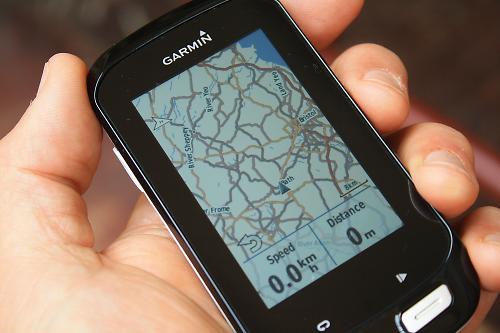 You can also customise the map view with a data overlay if you want to. 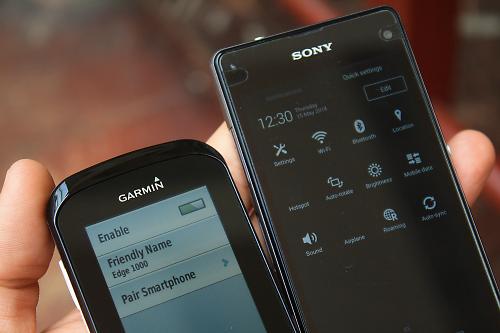 Pairing a smartphone via Bluetooth is probably the last thing you'll want to do before you get started. Connecting to my Sony Xperia Z1 Compact was pretty straightforward. You have to go into the Connect Mobile app to finalise the connection. Once that's done you can change the settings on your phone to decide what it can do. The Android App doesn't yet have options for pushing notifications to the Edge, just for automatic uploading of rides to Connect, and sending weather info to the head unit. So that's it, for now. We're good to go and explore the Edge 1000's feature list. Wish us luck. We'll come back with our findings in due course.