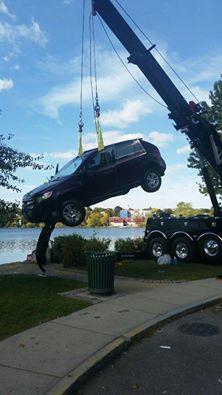 Video: Cyclists save motorist after SUV plunges into lake

Three passing cyclists bravely rescued a pensioner who drove her 4x4 into a lake on Friday, winning accolades from locals and police.

Helen Joyce, 68, from Medford, Arlington, USA, mixed up the pedals in her car when trying to back into a parking space and accidentally drove into Spy Pond.

She was incredibly lucky however, as three passing cyclists, David Frasier and Cesar Perozo, both local, and their friend Kenneth Chapman from Australia, jumped into the water and rescued Mrs Joyce from the sinking car.

They acted so fast that she was unharmed, but was taken to hospital for treatment for hypothermia.

The vehicle was removed from Spy Pond yesterday by Arlington Police with assistance from Arlington Fire and Cambridge Fire.

"I commend the teamwork and courage of everyone involved in this incident, from the rescuers who fearlessly ran into the water to our officers and firefighters who executed the car removal today," Chief Ryan said.

"In a week filled with tragic news, this happy ending was more than welcome."

The incident remains under investigation by the Arlington Police Department.