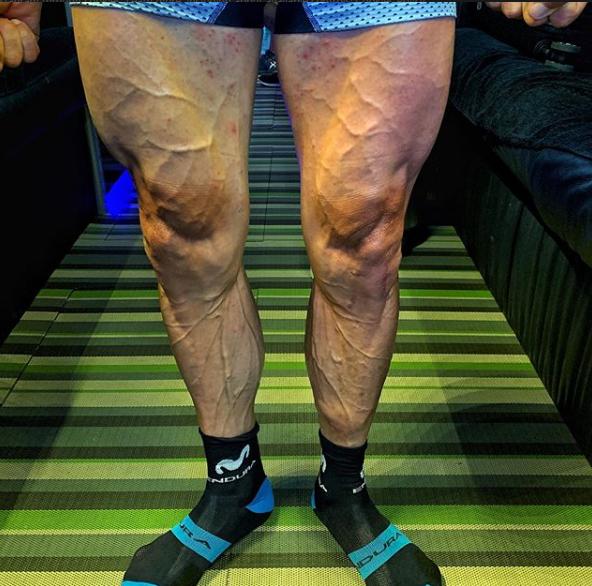 "Ready for war, no?" asks former Spanish road champ ahead of first summit finish...
by Simon_MacMichael

Movistar rider Jose Joaquin Rojas is the latest pro cyclist to have set social media alight by posting a picture of his legs online, mid-Grand Tour.

The 33-year-old two-time Spanish national champion posted a picture of his pins to Instagram before Friday’s Stage 13 of the Giro d’Italia.

Ahead of the first mountaintop finish of this year's race, he captioned the photo, "Ready for war, no?"

So far, the picture, showing Rojas’s veins bulging as he prepared to take to the start of the stage in Pinerolo, has received more than 7,000 likes on the photo and video-sharing site.

With a week remaining of the Italian Grand Tour, Movistar lead the team classification and their Ecuadorian rider Richard Carapaz, who took the maglia rosa on Saturday after winning Stage 14 to Ceresole Reale, extended his lead on yesterday’s stage into Como.

It’s not the first time that a rider has set the internet abuzz by posting a picture of their legs online showing the toll a three-week race takes on them.

Two years ago, during the Tour de France, Bora-Hansgrohe’s Polish rider Pawel Poljanski put an image of his legs on Instagram, with the caption, “After sixteen stages I think my legs look little tired.”

As road.cc’s Alex Bowden observed at the time, “We’ve all had tired legs, but they don’t normally look like Pawel’s. Just why are pro cyclists’ legs so veiny?

He went on to say that “low body fat certainly contributes,” flagging up a picture that Team Sky posted three years earlier in which they described Chris Froome’s legs as “ripped.”

He said: “The amount of blood that we get normally going down to our legs is five litres per minute, for anyone at rest. For an untrained athlete, their maximum exercise will have 20 litres per minute flowing through the muscles.

“One of these elite cyclists will have double that, about 40 litres per minute. They have massive volumes of blood moving through.”

Launikonis continued: "After he's finished exercising, the veins are showing up. Blood flow is pressurised through the arteries in a highly regulated fashion.

"What we're seeing are the veins, and there's a lot less pressure in them. There's a high level of blood being pushed into his legs for long periods of time, and it's still in there post-exercise.

"It's not going to happen to someone who's doing recreational exercise. It's clearly something that's only going to happen in elite athletes, like these guys riding in massive cycling events."