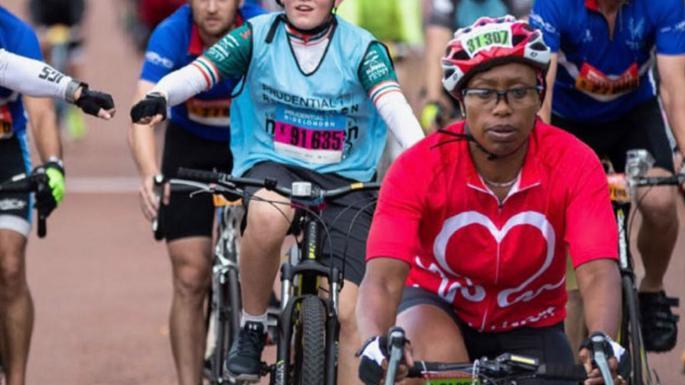 Leading blogger says organisers "should be embarrassed" of image aimed at highlighting event's diversity...
by Simon_MacMichael

Organisers of RideLondon have come under criticism after it emerged that a photograph on their website had been photoshopped to include a black woman participating in the event, with a leading blogger and cycling author saying "they should be embarrassed” about it.

The image, which had apparently been manipulated to try and make the event appear more diverse, has since been deleted from the RideLondon website, reports The Sunday Times.

The photograph above, published by the newspaper shows part of the image. The full picture showed a group of male riders, with female riders from ethnic minorities on either side.

But while two men shown in the image took part in the event in 2018, one of the women only did so the previous year.

Event director Hugh Brasher confirmed that the image had been created from three separate photographs and was aimed at highlighting the diversity of people who take part in events including the Prudential RideLondon-Surrey 100 sportive.

He said: “Three images have been combined to create this composite image: the female cyclists on the bottom left and bottom right were added to the central image of the two male riders bumping fists as they come down The Mall.

“All images are from riders who have participated in sportives at Prudential RideLondon and there was absolutely no intention to mislead.'

“It is not our usual practice to use composite images and this image has been removed from our website.”

He continued: “We know that cycling needs to do more to encourage people from all backgrounds to get involved and that is one of the key aims of Prudential RideLondon.

“We believe that we have led the way for mass participation cycling events.

“More than 100,000 cyclists take part over the weekend in a range of different events that cater for everyone.”

“We believe the average percentage of women in mass participation sportives in the UK is approximately 15 per cent.

“We continue to work to inspire people from all backgrounds to get on two wheels.”

Cycling writer Jools Walker, who blogs under the name Lady Velo and is black, said that organisers “should be embarrassed” of the picture:

“All I can imagine is a group of white marketing executives looking at this image and thinking: there’s a problem,” she said.

“But instead of trying to address why people from these groups don’t see cycling as inclusive, they decide to photoshop in ethnic minority women — badly. They should be embarrassed.”