More artwork shoes; this time the new Grand Tour shoes which are themselves a collaboration between Rapha and Giro
by nick_rearden

A few lucky recipients like our Mat Brett were in receipt of the first Rapha Grand Tour shoes and then frankly wasted their fortnight of the launch embargo placing them like artworks on the mantlepiece for fear that wearing them outdoors would be spotted. I mean, white perforated yak leather shoes even with the most discreet 'Rapha' branding are going to look conspicuous on the Wiltshire lanes in February.

Not the artist James Straffon, however, who saw the potential for proper art. To him the white leather was a blank canvas upon which his trademark decoupage technique could take flight and the Grand Tour name of the shoes was his theme.

Here's Straffon on the Rapha Grand Tour shoe collaboration, in his own words:

"Working on the Rapha Grand Tour shoe was a daunting task. The decoupage needed to sit well with the company ethos. It also had to exist as an embellishment to the already apparent 'beauty' of the raw object, and not speak a different aesthetic language. In addition, much trepidation arose when my usual working method introduced resin-coated sanding papers to fine Yak leather. Not a moment for the faint-hearted. Grand Tour was a journey in itself.

As always, rare, original segments of cycling memorabilia have been sourced, and applied around the form. One flank features the line-up of the very first 'Grand Départ' - back on July 1st, 1903, outside the Café Reveil-Matin, Montgeron, France. Eventual inaugural Tour de France winner Maurice Garin can be seen poised at the far right. The fated 1967 Tour is also honoured, with reference to its Stage 13 - Marseille to Carpentras. Here Tom Simpson left his life on the slopes of the Ventoux. Barry Hoban's consequent Stage 14 victory is also present. Merckx, Rivière, and Géminiani feature, among other subtle applications of familiar Rapha branding."

James Straffon is working towards his summer show - LE TOUR from maillot jaune to lanterne rouge - in which this and the previously featured Bradley Wiggins and David Millar customised shoe installations will be on show among other artwork on the theme of the artist's passion for the Tour de France. 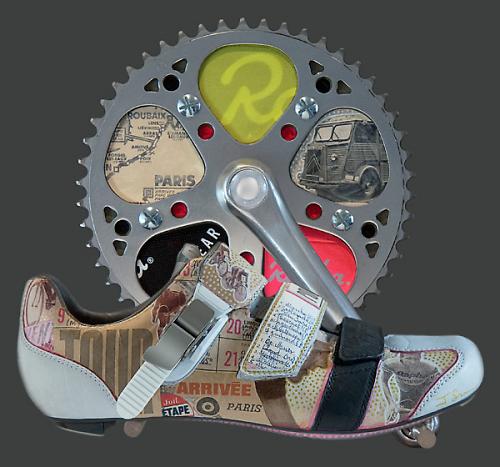