The bike they built for Fabian, as ridden by Fabian for the first week of the Tour
by dave atkinson

This is a special bike then: it's the yellow Trek Domane that Fabian Cancellara was riding for the first week of the Tour de France whilst he was sporting the Maiilot Jaune. We've been ogling it at the Trek World Europe show in Frankfurt and it's heading over to the UK for the Surrey Hills Road Race Festival. It's not a replica: this is his actual bike, still with his Tour number attached. It hasn't even been cleaned. When we see Pro bikes we often ask, "is it the same as the ones you can buy in the shops?" but the story with the Domane is kind of the other way around: this is a bike that was built from the ground up to suit Cancellara's riding style and so the bike you buy is effectively the bike they built for him. We first clapped eyes on it at the Strade Bianche race in Italy earlier this season, and that was also the first time Cancellara got to compete on it. So pleased was he with the bike that he wouldn't give it back and kept riding it in races, a bit of a headache for Trek because more and more photos of the Domane appeared in the press ahead of its launch, which we covered back in March. "After competing on this bike, winning on this bike, it’s going to be hard to get me on anything else,” said Spartacus of the bike at the time, and true to form you rarely see him riding anything else these days. Except in time trials, of course. 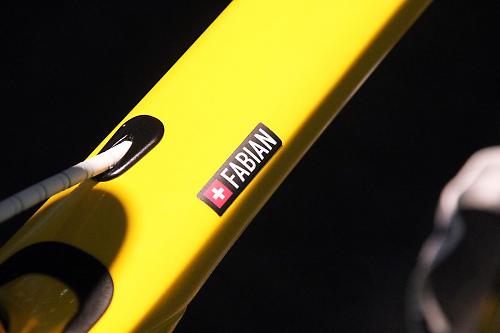 Want to see Fabian's bike? It'll be at the Surrey Hills Road Race Festival over the weekend of the Olympic Road Races, on the East Street Cycles stand. As well as that there'll be plenty more to see, including the new Trek Madone and a whole heap of gear from the likes of Cannondale, Canyon, Kask, Endura, Polaris, Whyte, Wilier, Continental, Schwalbe, Bespoked Bristol, Powerbar… The list goes on and on.

For more details of the Festival and Expo head over to www.surreyhillsroadracefestival.com