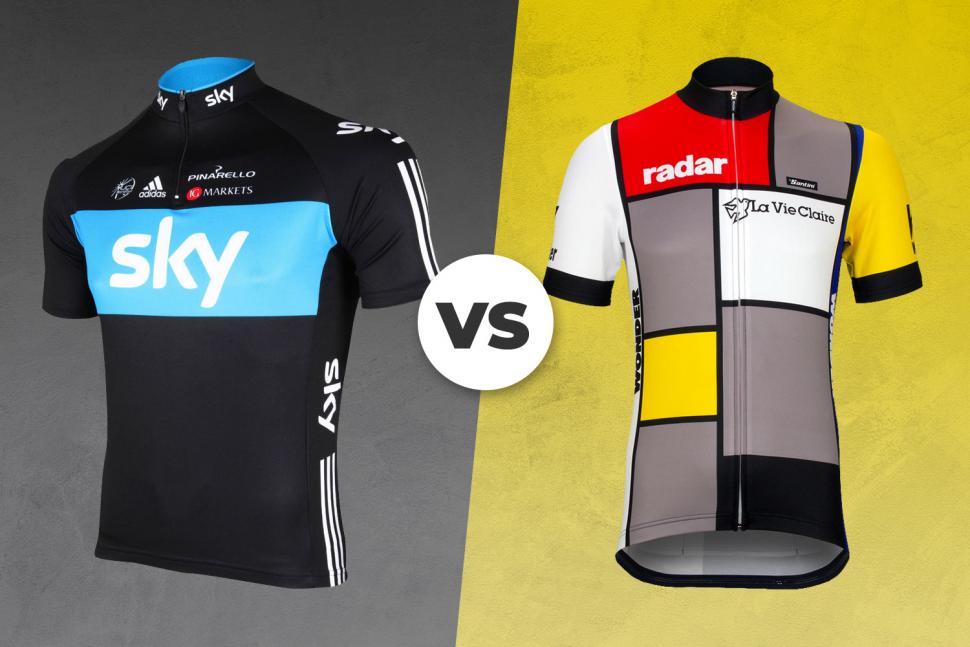 Full Kit Ranker round 1: Your chance to vote for the greatest cycling jersey of all time

From vintage wool beauties to modern classics, here's the shortlist of 16 of our favourite cycling jerseys of all time, in round one of our quest to crown the best ever to be zipped up in the pro peloton.....
by Jack Sexty

*VOTING FOR ROUND 1 IS NOW CLOSED... SEE YOU IN THE QUARTER FINALS!*

With no actual pro cycling going on at the moment, it's time to hark back to years gone by and reminisce over classic cycling moments - and if you consider yourself a bit of a fashionista like us lot here at road.cc, that also means fondly remembering some of the greatest cycling jerseys ever to grace the peloton... that's right, it's time for the road.cc Full Kit Ranker!

While it's patently clear that 'the' greatest jersey of all time is the road.cc Classic Evo argyle-patterned jersey (buy another one here) the aim of this knockout tournament is to crown the best ever worn by a professional team. We've delved deep into cycling history and pulled out some absolute vintage beauties, while also adding in plenty of modern classics for good measure to devise a shortlist of 16... we had to make some brutal choices to cut our longlist down and we're under no illusions that some of your faves will be missing, but life (and the Full Kit Ranker) can be cruel. Here's how it works: below are eight separate polls, with two classic jerseys going head-to-head in each one - fixtures were made with a random number generator. You vote for your favourite on each of the eight polls, and we will gather the results on Friday at midday. The quarter finals will then commence on Sunday 5th April, then the semi finals and grand final (drum roll) take place over next week before the Full Kit Ranker's greatest cycling jersey of all time is decided.

Without further ado, let's get voting and we'll see ya in the quarters!

Poll not showing above? You're probably on the AMP page. Click here!

First up, it's that little British collective that now go by the name of Team Ineos and the legendary La Vie Claire of France. While we could have gone for any number of Team Sky jerseys, we've opted for the Adidas-branded version that Bradley Wiggins wore before he took the yellow jersey at the 2012 Tour de France on stage 7. Arguably 'the' jersey for MAMIL's to be seen in as they caught the cycling bug in 2012 due to Tour de France and Olympics fever.

The distinctive La Vie Claire jersey is one of the most popular of all time, and we've gone for the version that Bernard Hinault wore on his way to Tour de France victory in 1985. It's based on the artwork of Piet Mondrian, and was made by Santini although originally designed by Benetton.

One of the most storied jerseys of all time, the Molteni strip of 1972 was donned by Eddy Merckx as he stormed to victory in the Tour de France, Giro d’Italia, Flèche Wallonne, Liège-Bastogne-Liège, Milan-Sanremo and Tour of Lombardy all in one dominant season. Molteni were Italian salami manufacturers based in Arcore near Milan, and although the team were Italian the Merckx Influence meant that most of the riders were Belgian from 1970 onwards.

Fast forward a few decades and we have Garmin Cervelo's limited edition Tour de France jersey from 2011. You might have guessed we've picked this one because we just love argyle, and the Castelli-made beauty was rocked by riders such as David Millar at the 2011 Tour.

Famous for its all-orange kit, Spanish outfit Euskaltel-Euskadi were strong Tour de France contenders in 2004 in the form of Iban Mayo. it wasn't to be as he crashed out and the 'victory' went the way of a certain American, but Mayo still stood out for the stages he competed in before abandoning in the Pyrénées!

Another jersey to be worn by the legendary Eddy Merckx, 1970 was the year when the Belgian was again totally dominant, winning the Tour de France and Giro d'Italia Grand Tours and Paris-Roubaix. It's a shame he didn't spend much time in it as Merckx was invariably to be found in pink and yellow...

Not just a legendary part of cycling history but also film history, Brooklyn's famous jersey was worn by Roger De Vlaeminck in his 1977 Paris-Roubaix victory, and an earlier version also featured in the 1976 documentary film A Sunday in Hell. Though it has a distinctly American theme, the team was Italian and was sponsored by Italian gum manufacturer Brooklyn Chewing Gum.

Another Italian collective that disbanded in 2002 and then morphed into what is now the Deceuninck–Quick-Step team, Mapei GB were one of the classiest outfits in the peloton during 1996, riding sleek Colnago frames and rocking this colourful jersey made by Sportful. It was worn by Swiss superstar Tony Rominger, who won the Giro d'Italia in 1995.

In a battle between two American teams, the US Postal offering might have a rather chequered history, but that doesn't mean it's not a classic. Worn by none other than Lance Armstrong on his way to his first Tour de France victory (now crossed off of course), Pearl Izumi began making the US postal jerseys before Nike took over from 2000 onwards.

There are various funky Jelly Belly jersey designs out there and it's become a firm modern classic in its various iterations. This one from 2005 was worn by the likes of Jeremy Powers and was manufactured by Santini.

This match-up pitches the oldest and newest jerseys on our list together, and the Bianchi strip from the 50's is the stuff of legends. You'll see plenty of imitations at L'Eroica events (maybe even a genuine one if someone has good connections or plenty of cash) and it was worn by Fausto Coppi in the latter stages of his career before his life was tragically cut short from contracting malaria in 1960.

EF Pro Cycling's latest bright pink kit made by Rapha might divide opinion somewhat, but we reckon some of the team's uber-cool riders such as Lachlan Morton and Alex Howes rock it with ease on their gravel and bikepacking adventures.

Another brand new kit to make the list and another from British brand Rapha, Canyon SRAM's distinctive jersey doesn't overdo it but is super colourful all the same, and is currently worn by the Barnes sisters and current German road champion Lisa Klein.

Peugeot's name graced the peloton in various iterations from 1901 all the way up to 1986 when they disbanded as Peugeot-Shell, and we've gone for the 1984 version as worn by the likes of Robert Millar, Stephen Roche and Sean Yates and manufactured by Santini... an absolute icon in all its various versions over the years, belonging to the most successful cycling team of all time according to cycleranking.com.

Renault lent their name to the pro peloton between 1978 and 1985, with the French team riding Gitane bikes and going by the name Renault–Elf by the time this jersey was launched in 1983. As worn by Bernard Hinault, Laurent Fignon and Greg LeMond, it's a true collector's item.

The pop art-influenced Z-Tommaso jersey from 1990 was one of the first in the pro peloton to use modern sublimation fabric printing techniques, which means the designers went all out for the kit that Greg LeMond wore before he took yellow for his third Tour De France win. The big cartoon Z with the smoke cloud represented the team's main sponsor Z Vetements, a children's clothing manufacturer.

Make sure to cast your votes for each match-up, discuss with your fellow Full Kit Rankers and of course, let us know what classic jerseys we've missed and how wrong we are in the comments below... who knows, we could even have enough for second tournament!

P.s. cheers to the Full-Kit W*nkers page for inspiring the name of this epic contest - part of Twitter folklore.