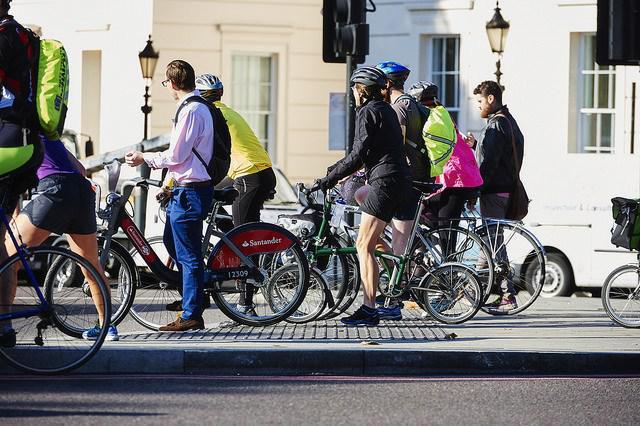 Online abuse ‘dehumanises’ cyclists and puts them in danger on the roads, British Cycling warns

“We will continue to use social media to try and enforce better behaviour,” says the governing body
by Ryan Mallon

Online abuse has reached a “tragic level” and is dehumanising and endangering cyclists on the roads, British Cycling has warned, as the governing body says it will continue to use social media “to try and enforce better behaviour”.

British Cycling has, in recent years, campaigned against dehumanising language directed at cyclists, by both media outlets and the public, and more generally against toxic comments made on social media.

In 2019, Chris Boardman – in his role as policy advisor for the national governing body – responded to a Channel 5 documentary on cycling by pointing out that cyclists aren’t the “scourge of the streets” (a reference to the controversial programme’s title), but “mothers, fathers, grandparents and children”.

Cyclists aren’t the ‘scourge of the streets’. They are mothers, fathers, grandparents and children all doing their bit to make Britain a healthier, greener and more liveable place.

Share this video from @Chris_Boardman to help us make our message loud and clear to @channel5_tv pic.twitter.com/PDkRGEjsRi

Last year, British Cycling joined a number of other leading sporting organisations and clubs in participating in a weekend-long social media boycott in protest against what it termed “the ongoing and sustained discriminatory abuse which sportspeople and others continue to receive online.”

However, Nick Chamberlain, British Cycling’s policy manager, has told the Evening Standard that the culture of anti-cycling abuse online has not improved during the past decade and continues to put people’s lives in danger.

“Cyclists are worried that abuse online is going to be converted to dangerous [behaviour] on the road either verbally, or tragically physically where people have used a vehicle as a weapon,” Chamberlain said.

“It is just generally dehumanising language. Things have not got better. The abuse is still there. The language is as unpleasant now as it was ten years ago.”

Chamberlain also noted that community and private Facebook groups – including those created to oppose active travel initiatives such as Low Traffic Neighbourhoods and cycling infrastructure – tend to be among the worst anti-cycling offenders, though the policy manager says that comments sections under news stories and call-in radio shows also provide a platform for abuse.

He added: “We just have reached a tragic level of abuse online and sadly cycling is caught up in it.

“It’s symptomatic of our busy, congested and unpleasant roads for a lot of people. This is especially around our big towns and cities.

“And then there are those who don’t cycle themselves or know anyone who cycles – when they see a cyclist going faster than they are in an urban area, we know that is a real triggering aspect for some people for some reason.”

Responding to whether another social media boycott is necessary to curtail these potentially dangerous levels of abuse, Chamberlain said: “We have to hold that up as a measure of last resort. Our preferred method is to be proactive, and we will continue to use social media to try and enforce better behaviour. We want to call these things out and talk about what we can all do.”

Wandsworth councillor and active travel campaigner Jo Rigby, who says she was once “hounded off Twitter” by “awful, angry men”, told the Standard that the culture of abuse against cyclists is also fuelled by a “conspiracy theory” floating around that a “cycling lobby” is currently infiltrating government departments and stoking the so-called ‘war against motorists’.

“‘Cyclist’ has become such a term, with connotations of entitlement, when really I do not think it is such a them and us issue,” the councillor for Balham, south London, said. “I would say I was a resident who sometimes walks and sometimes rides a bike. It should not define someone’s entire identity.”

The pervasive nature of online anti-cycling abuse – highlighted on road.cc’s live blog and collated on the Twitter page, ‘Stupid shit people say on Facebook about cycling’ – is also shockingly prevalent within the mainstream media.

In August, less than a week after Grant Shapps’ ill-fated pledge to introduce tougher laws for cyclists, the Mail on Sunday was heavily criticised for an article which claimed that 26 “rogue cyclists” jumped a red light outside Buckingham Palace in one 60-minute spell, prompting the paper to conclude: “No wonder cyclists face a crackdown”.

The article, published under the headline “Red light rats”, was described by cycling commentators as “dehumanising”, “irresponsible” and “dangerous”, with one cyclist arguing that the Mail’s apparent attempt to “stoke hatred” will “get people killed”.

Last month, a cyclist who was knocked unconscious during a vicious assault from a van driver noted the dangers of motorists “othering” and dehumanising cyclists on the roads.

“There is a big problem of ‘othering’ of cyclists, they are seen as less than human,” the 56-year-old, who was deliberately knocked off his bike by 30-year-old Jack Rawlins before being punched, said following the motorist’s sentencing.

“If something happens to someone’s car or something, it is seen as more important than the health and wellbeing of the cyclist, which I think is really worrying.

“Any kind of infraction of the Highway Code from cyclists is met with rage from people who may do plenty of things outside the Highway Code as well, but because it’s a cyclist they see that differently.”