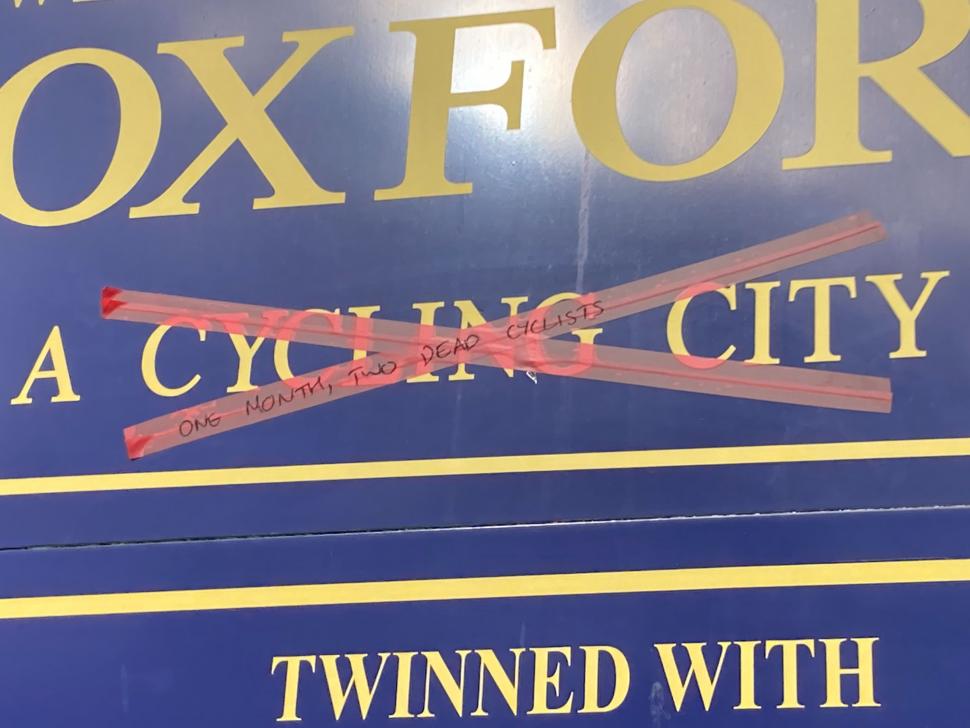 A sign claiming Oxford is "a cycling city" has been covered with the message "one month, two dead cyclists", as questions continue to be asked following the second death on the city's roads since February.

Local reporter Tom Seaward spotted the sign, welcoming road users on the B480 to the city, had been defaced with red tape covering the "cycling city" line. On the tape a simple message was written: "One month, two dead cyclists." 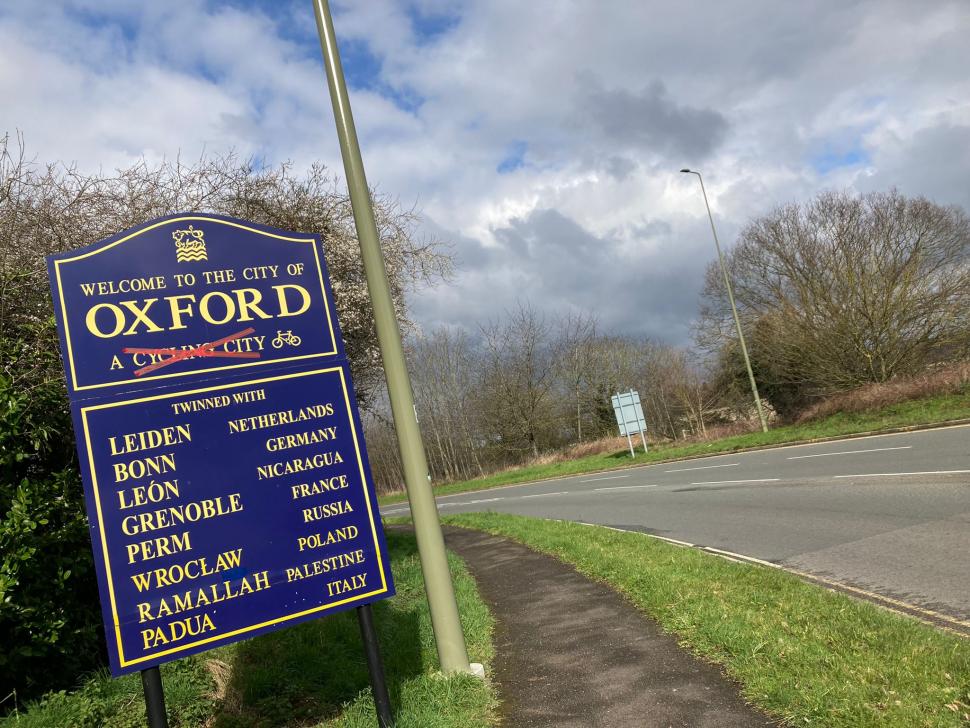 The Oxford Mail journalist noticed the message while undertaking a "pilgrimage" to all the city's 16 sites of cyclist fatalities since 2000.

On the way back into Blackbird Leys I see someone’s defaced the ‘Welcome to Oxford’ sign. The claim it is a ‘cycling city’ is crossed out and in caps has been added: “One month, two dead cyclists.” 7/ pic.twitter.com/nkN1QIXWlc

What has caused concern amongst local riders and campaigners alike, is that two of the casualties have happened in the past month.

> “White lines do not work”: Oxford campaigners call for urgent action after cyclist is killed at notorious junction

Last week, University of Oxford postdoctoral scientist Dr Ling Felce became the second cyclist to be killed on the city's roads in three weeks, following a collision involving an HGV being driven at a notoriously dangerous junction.

At 2.30pm today (Tuesday 8 March) a vigil will be held at The Plain in Dr Felce's memory, hosted by local charity Cyclox. Since the collision last Tuesday, flowers, a white bicycle and tributes have been left at the scene.

Dr Felce's husband of eight years told the Oxford Mail he is "lost without her warm presence".

While Cyclox’s chair Dr Alison Hill said: "We all should be calling for a ‘vision zero’ which is about total intolerance of any road user death because it is just awful for any road user to lose their life."

The second cyclist death on Oxford's roads in 2022 came three weeks to the day after another University of Oxford faculty member, Ellen Moilanen, died near Oxford Parkway Station on February 8.

> Campaigners call for “immediate changes” after cyclist was killed in Oxfordshire

The Reuben College academic administrator was killed when she was struck by a lorry driver while cycling on the A4165 near Oxford Parkway station, a busy commuter route between Kidlington and Oxford. She was the fourth woman killed while cycling in the area since 2017.

In response, Cyclox handed a petition to Oxfordshire County Council "calling for change to happen fast" to make the Oxford Road safe.

The charity's chair, Dr Hill, yesterday told Oxfordshire Live she believes one of the main reasons people don’t cycle "is because they are fearful about the state of our roads".

She also called for more segregated cycle lanes to better protect people using bicycles to travel around the city.

1/3/22 Ling Felce, 35, an Oxford researcher, was killed when her bike was involved in a collision with a tipper lorry on The Plain. Her husband said she would ‘live on through the love she has given us and so many others’. 20/ pic.twitter.com/l2HjQSTx0Y

"There is this local consultation out called the Local Transport and Connectivity Plan," Dr Hill said. "I know we should be using that opportunity to call for urgent action faster and sooner to make our roads safer.

"That involves a large number of different actions. It involves things like reducing speed and reducing traffic volume, which is utterly crucial because people see the huge number of cars and just feel too intimidated to get on their bikes.

"It involves making safe, segregated cycle routes that are separated from traffic because that is the only way people will feel safe."

The absence at this point of any cycle infrastructure seems telling.