FSA has launched its first electronic groupset, and we took it for a short spin to see if it's any good
by David Arthur @davearthur

The groupset war is heating up. FSA has entered the battle, unveiling its highly anticipated new electronic groupset, K-Force WE, earlier this month. I managed to get a ride on it, it wasn’t a very long ride so this isn’t an in-depth report, but here are my first impressions on the ergonomics and functionality of the new groupset. A full review will have to wait until a groupset arrives for a proper test.

It’s perhaps surprising that the company hasn’t produced a groupset already, considering some of the products it is very popular for, with its handlebars and cranks commonplace on bikes throughout the market and adorning a vast majority of pro race bikes. The Italian company really has made its mark in the 20 years since it founded. But a full groupset it has never managed, though it has dabbled with the idea, most notably with its Vision time trial groupset a few years back. But a road groupset is where it is at, and these days the buzz is all about electronic since Shimano successfully paved the way with Di2. What FSA has developed then is a semi-wireless groupset, with the two derailleurs wired to a battery in the seatpost while the shifters communicate via ANT+ to the mechs, in what it promises is a secure wireless protocol. You can read all the technical details here, to save repeating them again. 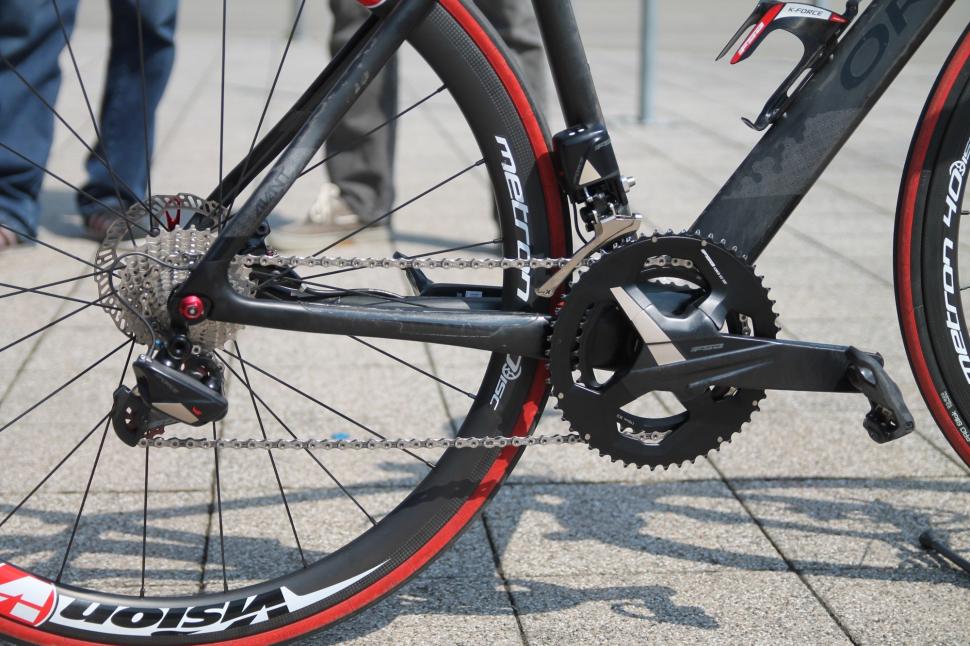 So how does it actually ride?

There has been much discussion about the aesthetic appearance of the groupset, but the really important thing from a riding point of view are the ergonomics, and here FSA has nailed the shape of the shifter hoods. It has kept the body of the shifter compact with a shape reminiscent of a Shimano product. Your hands fall comfortably into place, with the grippy rubber material providing good purchase and the size just sufficient to allow a good amount of finger wrap around the body of the shifter.

FSA offers two brake lever lengths, a level of customisation not afforded by Shimano, SRAM or Campagnolo, with the standard levers I rode being 6mm longer than the compact versions. I found the shape of the curvy levers easy to reach from the hoods and the drops, with one finger braking easily possible without over-stretching a digit. There's further customisation possible with the app that FSA has also developed, but I wasn't able to try it out on, so that'll have to wait until the groupset arrives for a full review, which will hopefully be this year. 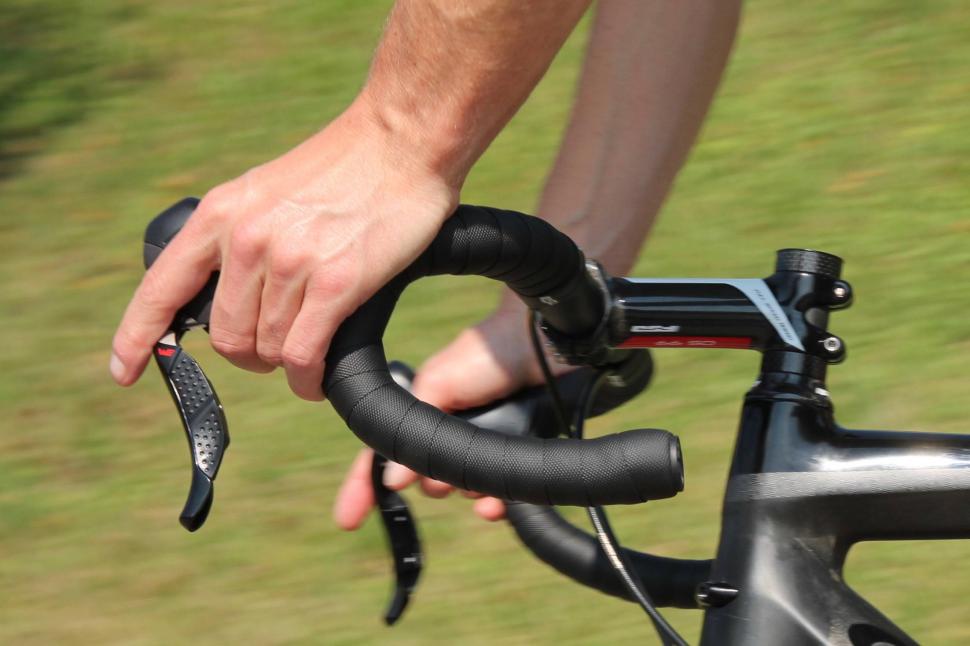 Unlike SRAM with its radical two lever shifting layout, FSA has opted for a more conventional shifting system that mimics Shimano’s Di2. To change gear is to operate a rocker paddle integrated into the lever. It’s quite large with a dimpled surface and raised ridge halfway along, all of which makes shifting intuitive and easy.The large size of the lever makes it easy to find when you’re cycling along, and because the shift paddle rocks up and down like a seesaw, there’s no chance of an accidental wrong gear selection. It’s not difficult to discern between the upshift and downshift as is often a complaint levelled at Shimano’s Di2 levers. 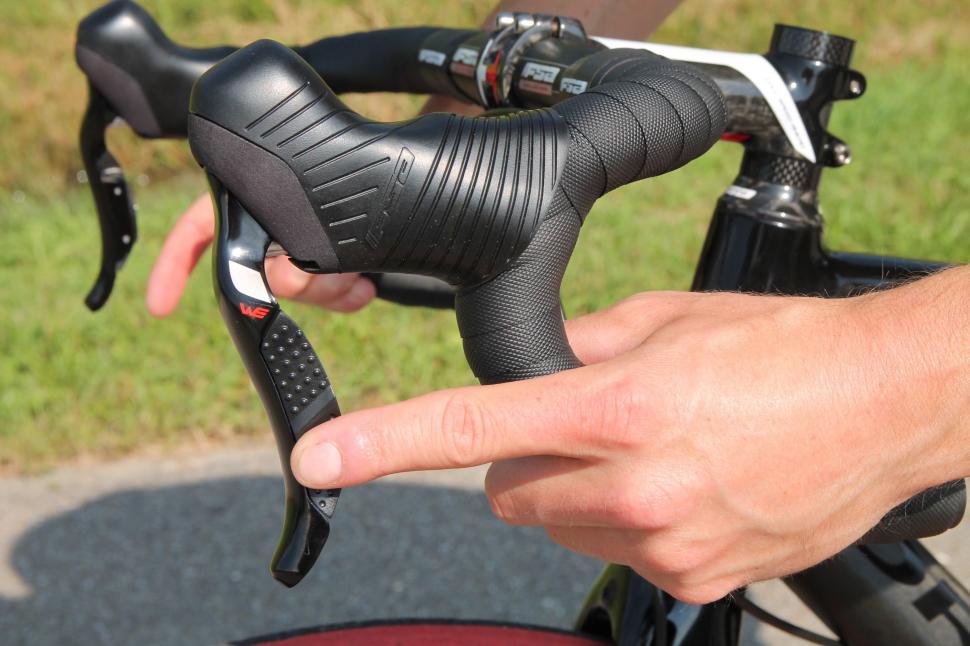 The gear shift paddle operates on a rocker mechanism with two small springs behind each end. The shift action is light and delicate, only the lightest pressure is required to change gear. It’s sensitive and the light touch means you quickly get used to the groupset and after just a few minutes I was happily shifting up and down gears without thinking about what my fingers were doing. It helps that the layout is similar to Shimano Di2, but it has to be said, shifting is easier because there’s no confusion about which paddle does what. 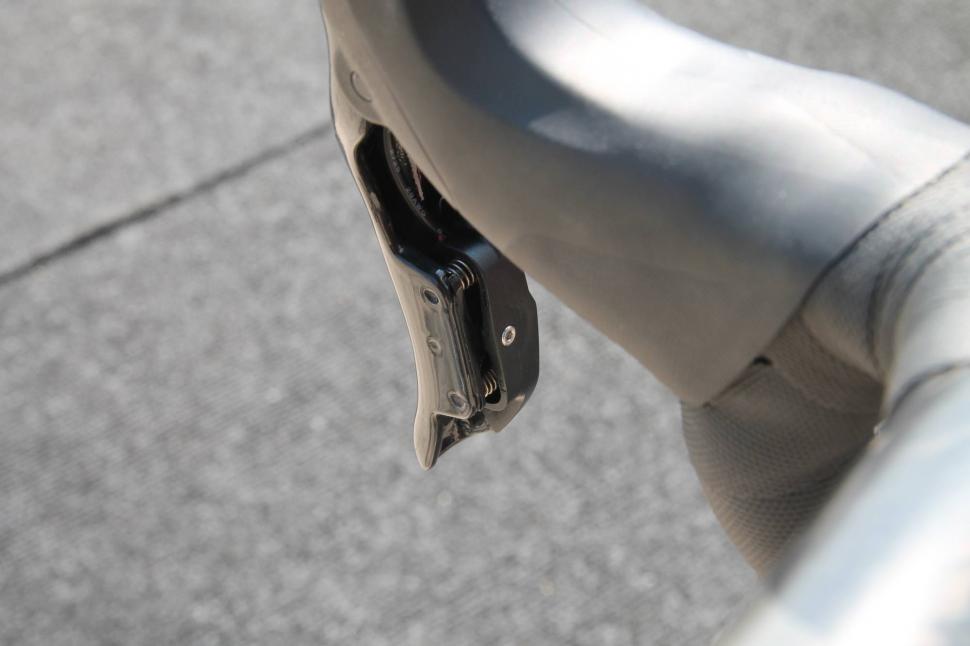 When you stab the gear shifter with a finger, the derailleurs work quickly and quietly. Shifting, especially at the front, is remarkably swift and very smooth, with no unwanted noise. Rear shifting is similarly quick with shifts coming with little hesitation, with a response rate that feels somewhere between the razor sharp changes of Di2 and the slight lag of eTap - I need to spend much more time on the groupset and test it alongside the two rival electronic groupsets to really assess its speed. What was clear is that it worked and worked very well.

Riding a new groupset can take some time to get familiar with how it works, but that wasn’t the case with K-Force WE, and after just a few minutes I wasn’t really thinking about the gear changes and trying to remember which lever produced what gear change. It’s intuitiveness and easy ergonomics certainly appeal. There’s a similarity to Shimano that certainly helps in this respect, if you happen to be used to Shimano Di2, you’ll find making the leap easier. 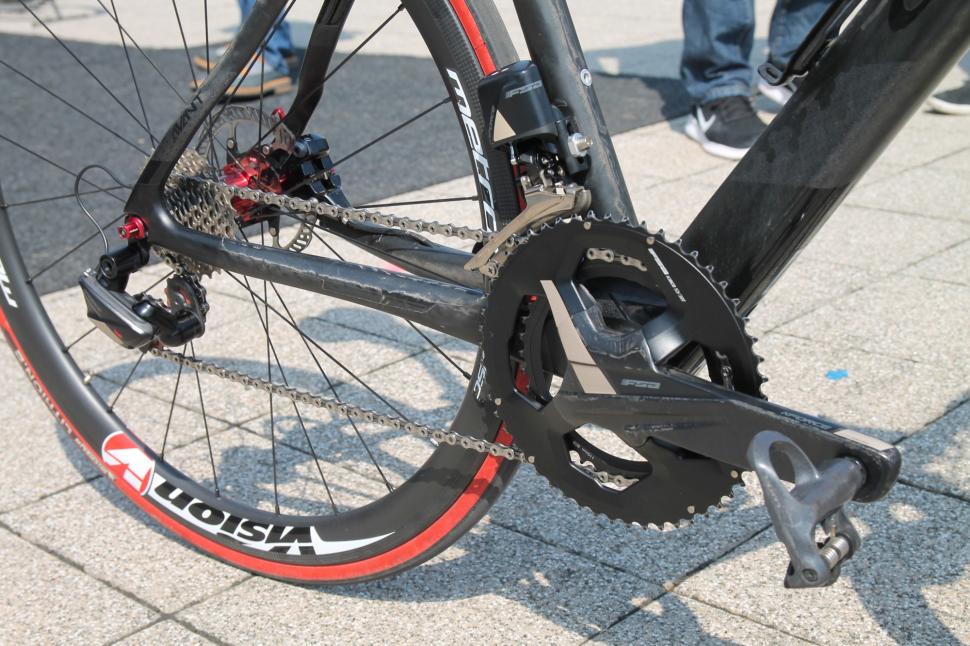 FSA has also developed a new carbon fibre crankset and new dual-pivot brake calipers, which will launch with the first groupset, but given the ride was so short I won't pass verdict on those components, for now, instead I'll wait for the full review. FSA will follow with a hydraulic disc brake version as well, which it needs to because SRAM has just launched a disc brake version of eTap. With the disc brake version, FSA has managed to keep the shape and size of shifter hoods almost the same as the regular versions.

There’s no doubt about it, FSA has succeeded in delivering an electronic groupset that based on a short ride appears to work as well as its key rivals. The hoods are a comfortable shape with a very nice shifting action and quick and crisp gear changes, and a customisable lever lengths and an app that I didn’t get to test that allows more fine-tuning and analysis of the groupset. 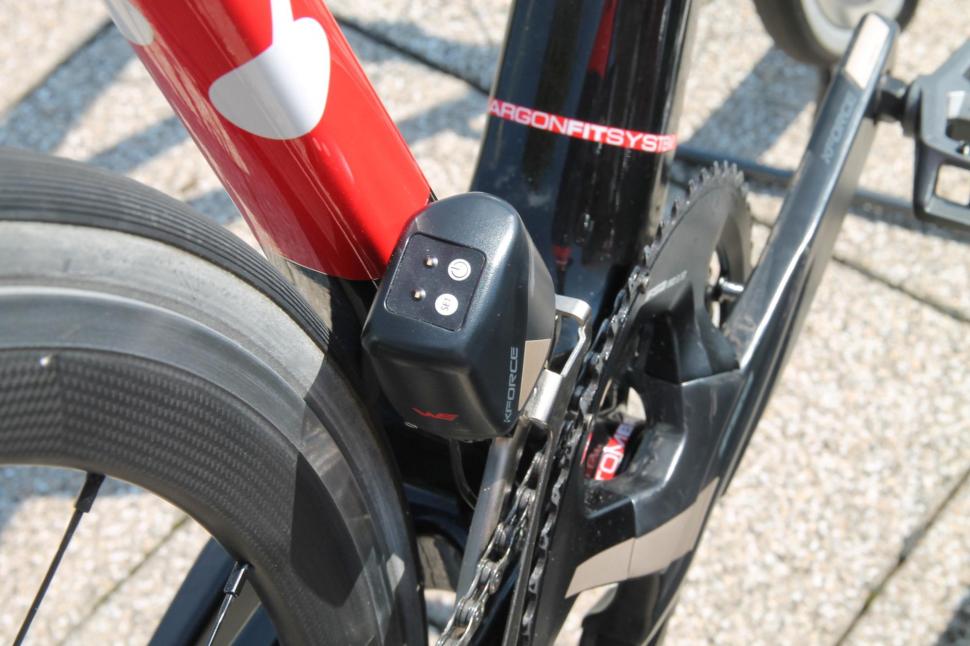 A lot is riding on this groupset for the company but FSA does have impressive visibility in the market and even though there are three key electronic groupset rivals, it won’t surprise us if K-Force WE gets specced on lots of 2018 bikes. Hopefully road.cc will get a groupset in for test soon so we can do a full and in-depth review and test its durability and really get under its skin. For now, though, I remain impressed.