At the weekend Tom Boonen rode his last ever Tour of Flanders aboard a new Specialized Roubaix which, unlike the production model that is only available with disc brakes, has been redesigned to accept regular rim brakes.

Last year Specialized completely revamped its popular Roubaix model, binning the Zertz inserts in the frame and fork that have been a feature of the Roubaix since its launch some ten years ago, and introducing the Future Shock, a small spring that isolates the handlebars and rider from the bumps and cobbles. It also shifted the whole range over to disc brakes and there was no mention of a rim brake version at the launch so this new bike comes as a bit of a surprise. 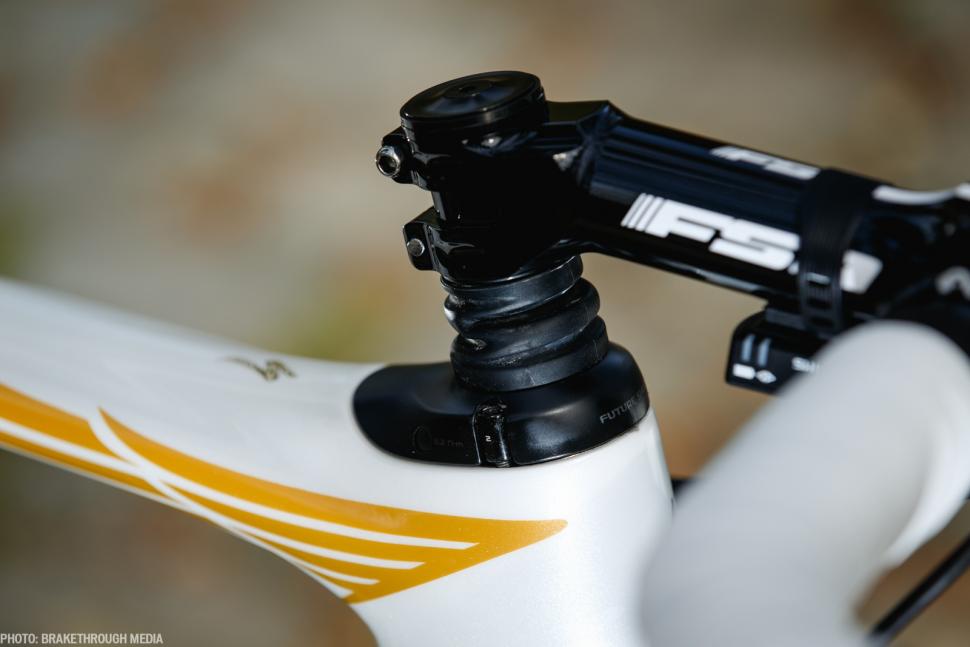 But Specialized has produced a new Roubaix, retaining the Future Shock and dropped seat stays, with rim brakes. Why? It’s simply because of the increased possibility of a puncture and managing the replacement of wheels according to Specialized.

Neutral support can play an important role in the cobbled classics where the puncture rate is higher than regular road races, but there’s also the option of taking a wheel from a teammate. It appears for those reasons Boonen decided it was wise to race a bike with rim brakes and not disc brakes, and Specialized has duly developed a special Roubaix for him. The rest of the Quick-Step Floors team used regular Tarmac race bikes it should be added.

“In a time where bikes with disc brakes have not yet been adopted by all teams, there exists a discrepancy in mechanical assistance along the course. For these technical and strategic reasons, working closely with our teams and riders, we have decided to supply him (for whom Paris-Roubaix will be the last race of his career) and all of our riders competing at both Flanders and Paris-Roubaix with S-Works Roubaix bikes that have traditional rim brakes,” says Specialized.

Tom Boonen started his 2017 season aboard a disc-equipped Venge ViAS and he’s been vocal about his satisfaction with the performance of disc brakes, even winning a sprint in an early season race. So naturally, there was some speculation that he might ride Specialized’s Roubaix with disc brakes at Flanders, especially if the weather forecast had been less favourable. That hasn’t been the case with the potential for a flat tyre increased on the cobbled roads, and with the rest of the team sticking to rim brakes, it does make some sense from a wheel change perspective to ride rim brakes.

Specialized tells road.cc that Boonen will ride the Roubaix for both Flanders and Paris-Roubaix.

Will Specialized put this new Roubaix into production then?

We assume they will. Well, they must if the UCI rules are anything to go by. The new Roubaix doesn’t currently feature on the UCI’s list of approved frames and equipment, though. Digging out the UCI rule book, rule 1.3.004 states “no technical innovation regarding anything used, worn or carried by any rider or license holder during a competition (bicycles, equipment mounted on them, accessories, helmets, clothing, means of communication, etc.) may be used until approved by the UCI. Requests for approval shall be submitted to the UCI, accompanied by all necessary documentation” so we can assume the UCI have given the new bike approval. 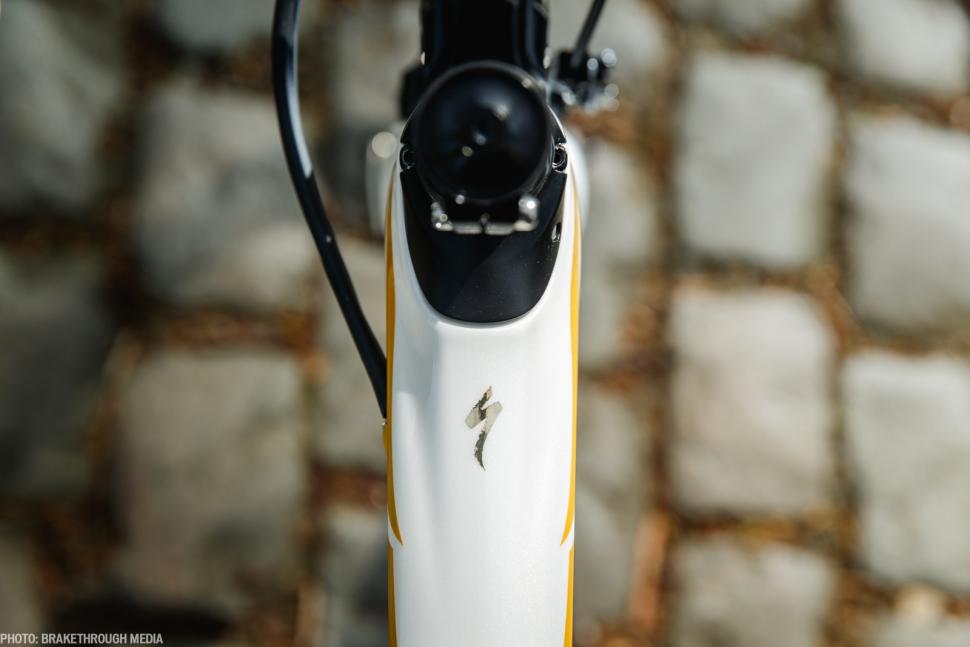 Another rule prevents manufacturers supplying racers with custom prototypes that will never see full production. Rule 1.3.007 specifies that “bicycles and their accessories shall be of a type that is sold for use by anyone practising cycling as a sport. Any equipment in development phase and not yet available for sale (prototype) must be subject of an authorisation request to the UCI Equipment Unit before its use. Authorisation will be granted only for equipment which is in the final stage of development and for which commercialisation will take place no later than 12 months after the first use in competition. The manufacturer may request a single prolongation of the prototype status if justified by relevant reasons.”

It also adds “the use of equipment specially designed for a particular athlete, event or performance are prohibited.” So there we go, we can presume this new Roubaix will soon be available, which is good news for people put off by the wholesale adoption of disc brakes on the new Roubaix. When it's likely to see the light of day is another matter, but it could likely be a 2018 model.

Since publishing this article, it's come to our attention that Specialized has released a limited edition version of the Roubaix complete with the same special paint job, but unlike Boonen's rim brake version, it's a disc brake frameset. It'll cost you £3,300. "The design includes four wing-tip feathers to represent each win, and guardian wings that'll hopefully carry him safely to a fifth win on the cobbles," says Specialized.

While the new Roubaix retains the same Future Shock and dropped seat stays and seat clamp with an increased seat tube diameter, allowing for a bigger range of seatpost deflection, the geometry looks decidedly custom.

We’d hazard a guess at a longer reach and shorter than the regular production sizes, even though the new Roubaix is more aggressive than the old model. 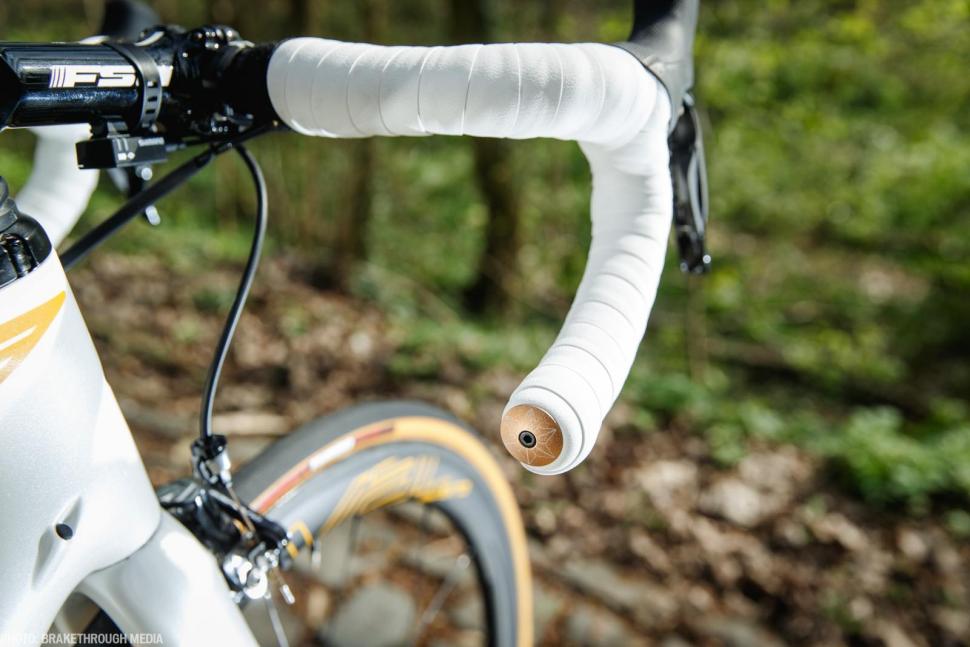 His bike is fitted with the lowest Future Shock top cap available, and a -17-degree FSA stem lowers the handlebars to a desire fit position. Boonen has always favoured double wrap bar tape right up to the stem for maximum comfort and hand position options. The bike is equipped with Shimano Dura-Ace 9000 Di2 and not the latest 9100. He’s using a 4iii power meter to gauge his power output, though we doubt he spends much time staring at the computer screen. The brakes are Dura-Ace direct mount brake calipers 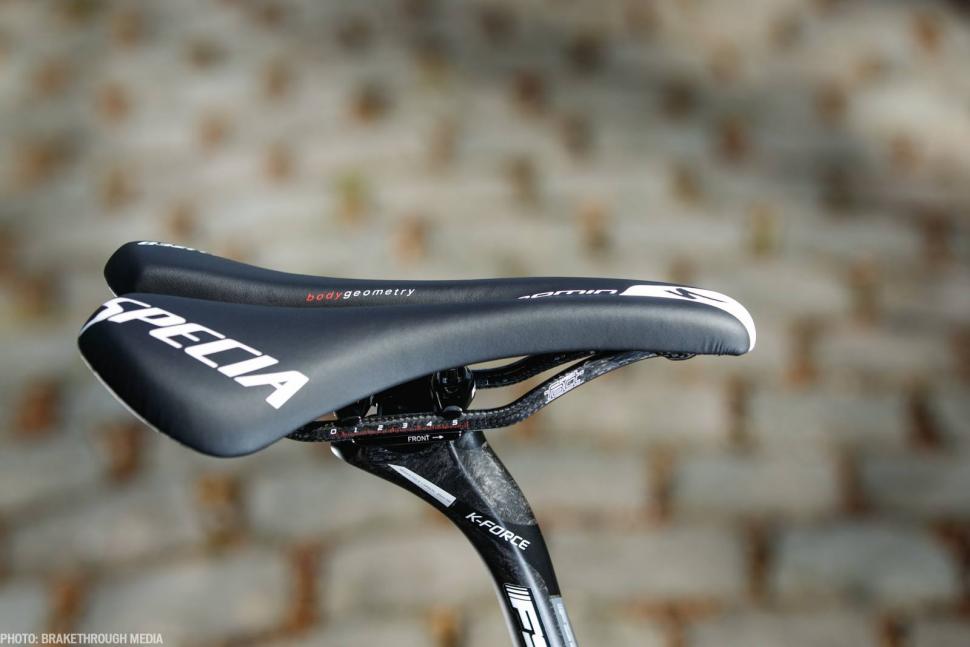 There isn’t the Specialized CG-R carbon seatpost with its oddly shaped head and Zertz insert, instead he’s fitted an FSA K-Force carbon fibre seatpost. His saddle is from Specialized, a Romin model.

Here's a video of Boonen testing the bike on the Muur last week: