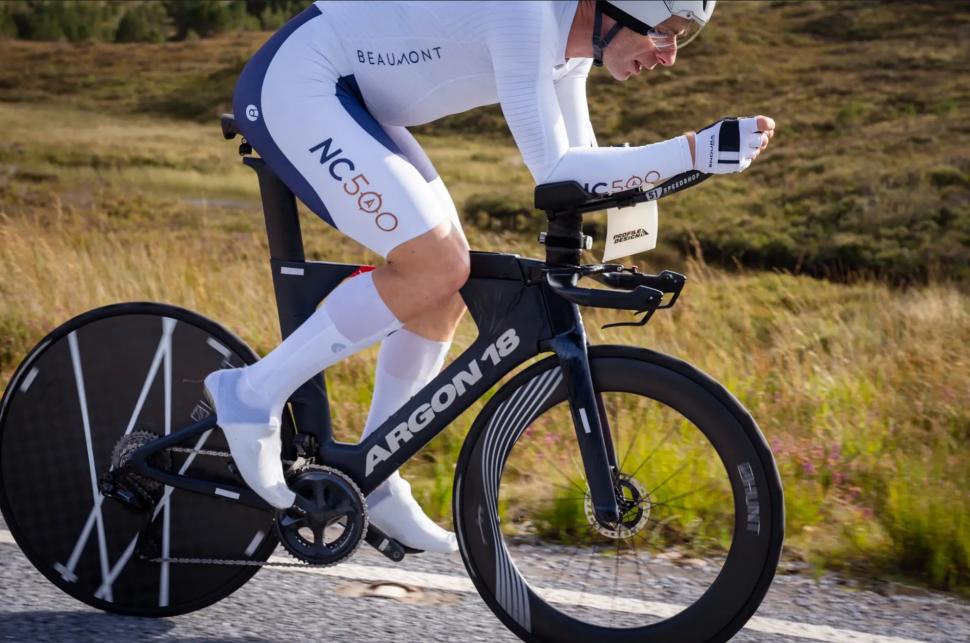 Never mind the legs... what gear does it take to ride 515 miles around Scotland in under 29 hours? Check out Mark Beaumont's record-smashing rig
by Jamie Williams

Mark Beaumont's North Coast 500 record-breaking ride took just 28 hours and 35 minutes, giving the Scot an incredible average speed of 29.3kph (18.2mph) including breaks. His equipment of choice, an Argon 18 E-119 Tri+ bike and Nopinz kit, were just part of the wind-cheating gear that gave him the edge. 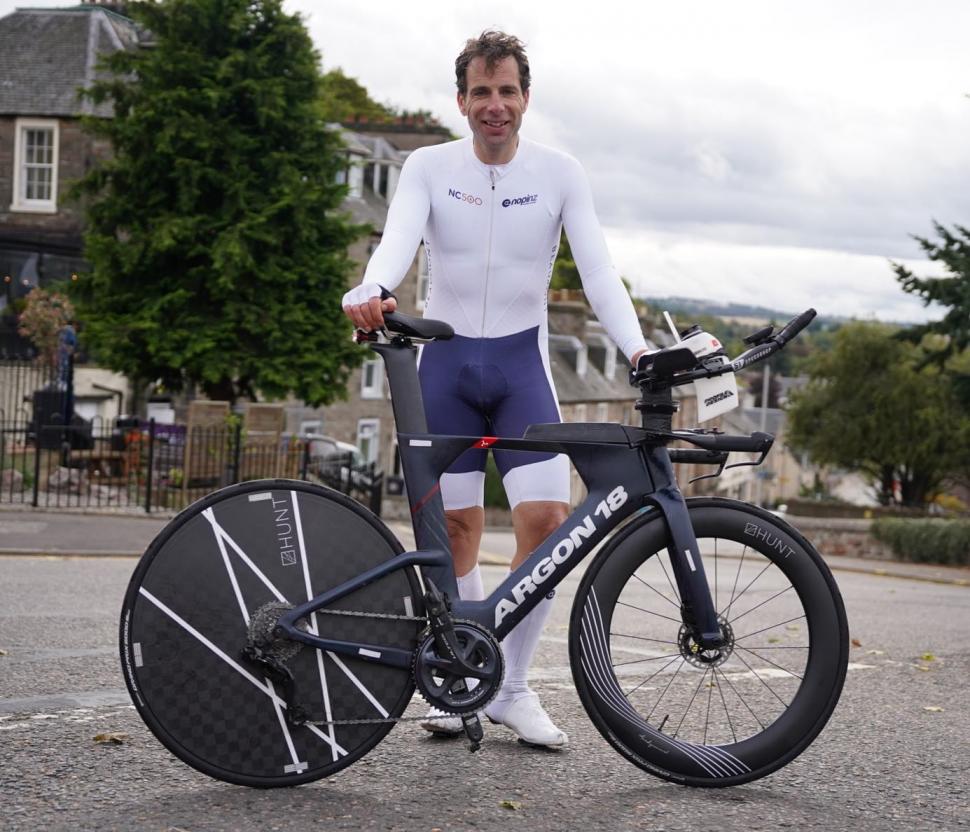 The Argon 18 E-119 Tri+ is as the name suggests designed for triathlon, and therefore, like the radical Cadex tri bike we saw unveiled recently, isn't restrained by the usual strict UCI rules.

Argon 18 says the Tri+ is 10 watts faster than the previous generation E-119 that we've previously seen the Astana Pro Team use, and more recently Novo Nordisk. 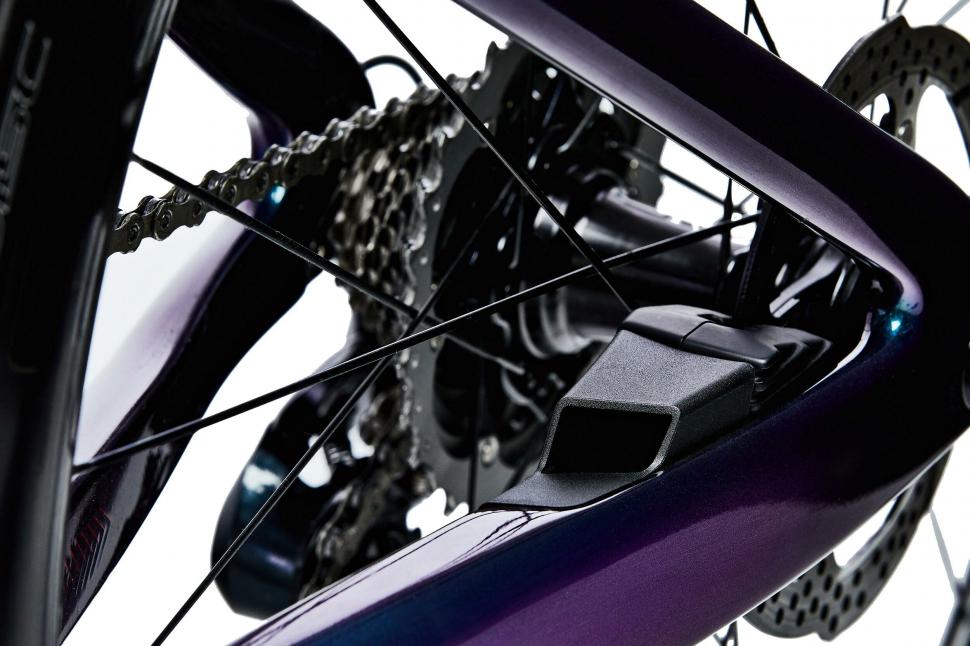 The frame features plenty of aero tech, with an integrated 405ml bento box on the top tube designed for Ironman nutrition. There's a toolkit stowed in the bottom bracket area and disc brake callipers that are integrated into the frame to hide them from the wind. 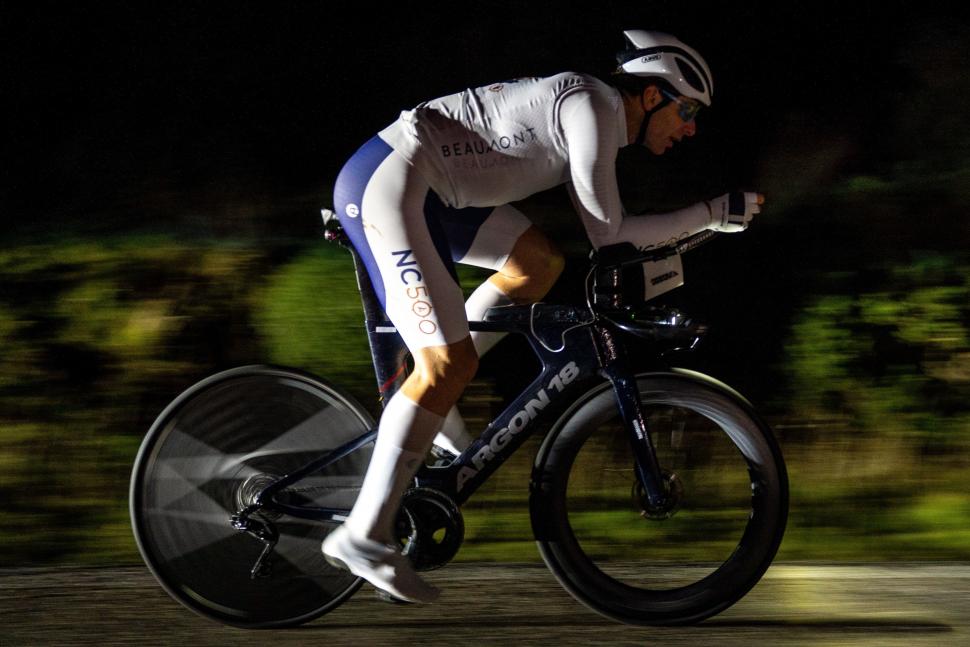 The NC500 is by no means flat with 9,754 metres (32,000 feet) of climbing, so Beaumont's set-up also had to consider weight. His wheels of choice were the Hunt 73 Aerodynamicist front with a 1,200g TT Disc rear, both set up tubeless and with CeramicSpeed bearings.

Compared to many full disc wheels the Hunt TT Disc is a bit of a bargain at £799. The tyres in question were Continental GP5000S TRs which we also reviewed very highly. 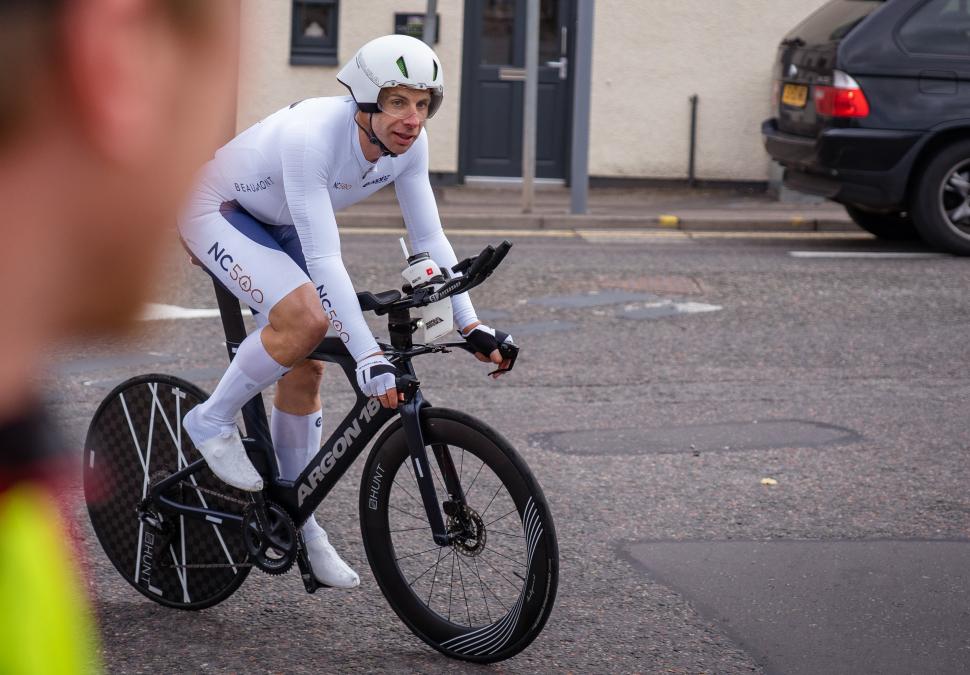 Graph time!
Comparison of the three recent North Coast 500 record rides, culminating in the new record by @MrMarkBeaumont at the weekend.
Interestingly, Robbie Mitchell (28.11) had a shorter moving time vs Mark Beaumont (28.19).
A huge swing between 350 and 400 miles... (1/2) pic.twitter.com/lVDCVOd1Ur

The groupset comes from Shimano, but in various forms. The mechs and shifters appear to be 12-speed R9200 Dura-Ace, but the cranks are the older generation R8000 Ultegra. These are paired with the newer 12-speed chainrings, which is why they don't match. 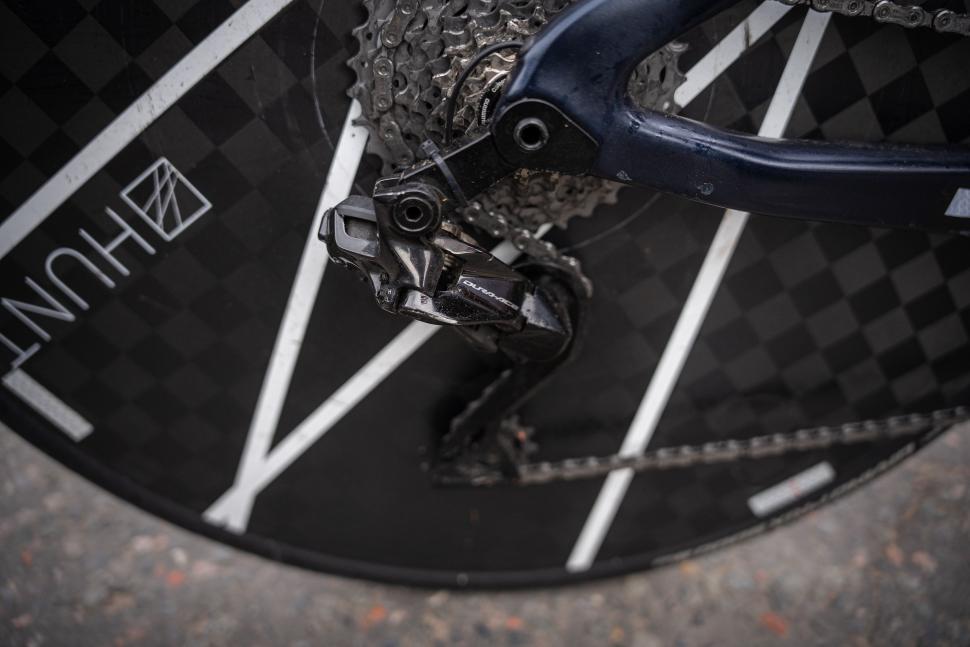 Beaumont also used a power meter to help pace his effort. You can see that it was only in the final stages that he pulled ahead of the previous record time on his way to breaking the record by 30 minutes. According to Beaumont's Strava data, he averaged 215w and had a weighted average (similar to normalised power) of 255 watts for the duration. 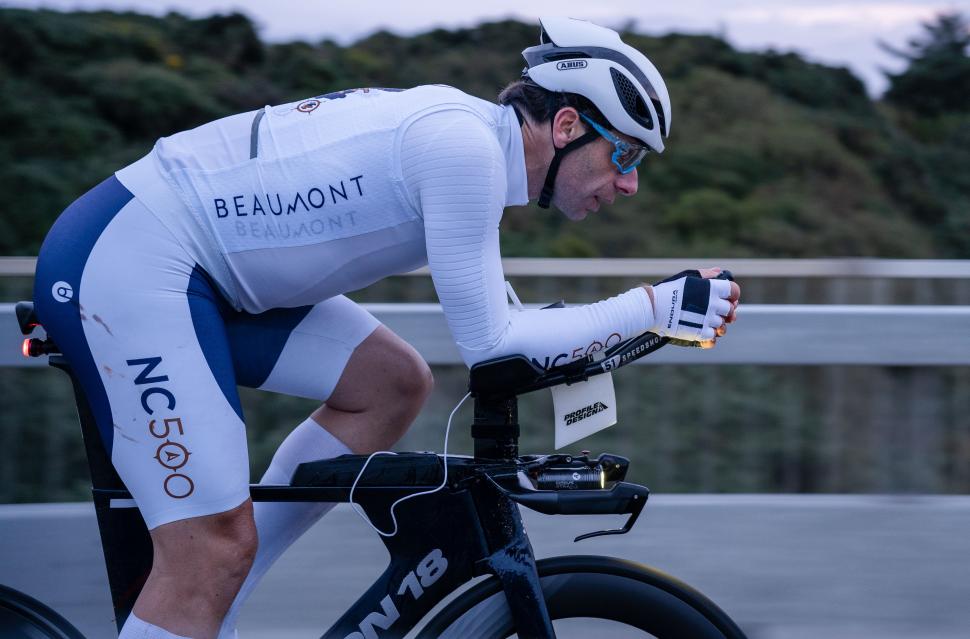 The 51 Speedshop cockpit is a result of the brand's collaboration with Argon 18, and between the carbon aero bars is a Profile Design Aqualite bottle for additional fluids. This can be drank from without coming out of your aero tuck. 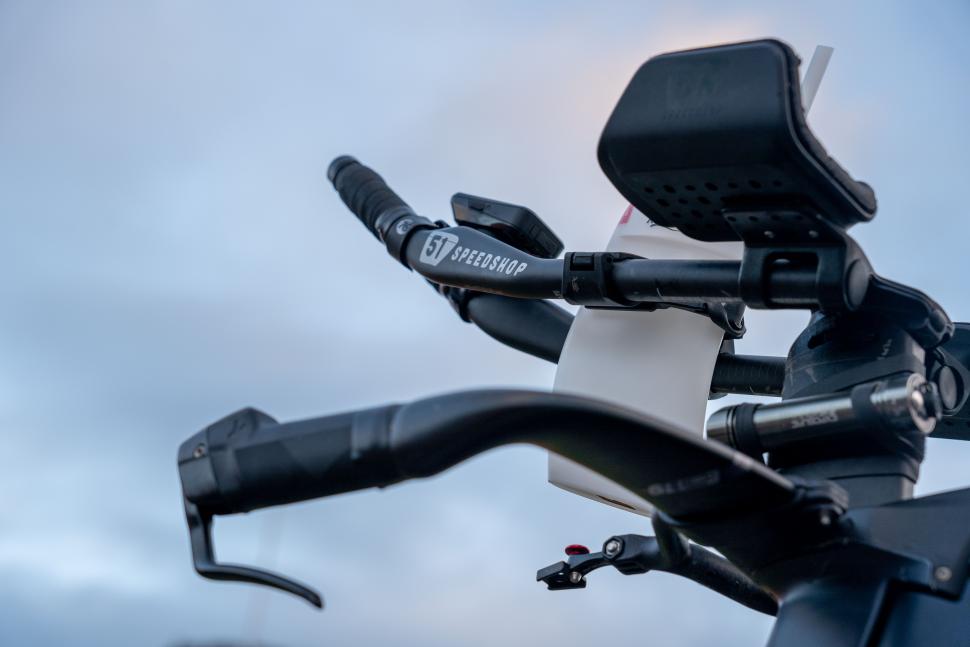 To keep his lights and Wahoo Bolt V2 computer charged up, Beaumont stored an external battery pack in the bento box. All of Beaumont's lighting solutions came from Exposure, with an Exposure Strada SB main front light for nighttime riding and what appears to be a Sirius Mk10 for everything else. On the rear, the Scot relied upon an Exposure TraceR to get him seen.

The kit worn for the attempt also had to be carefully considered, and Beaumont stuck with Nopinz throughout.

The custom long-sleeve skinsuit is a £334.99 Nopinz Flowsuit, but given the Scottish climate, Beaumont did also don a Pro-1 gilet at times. His shoes were covered by a set of aero overshoes, the Nopinz Flow-Covers, in their 'Long' form. These overshoes are claimed to save a rider 9 watts when riding at 45kph compared to bare legs. 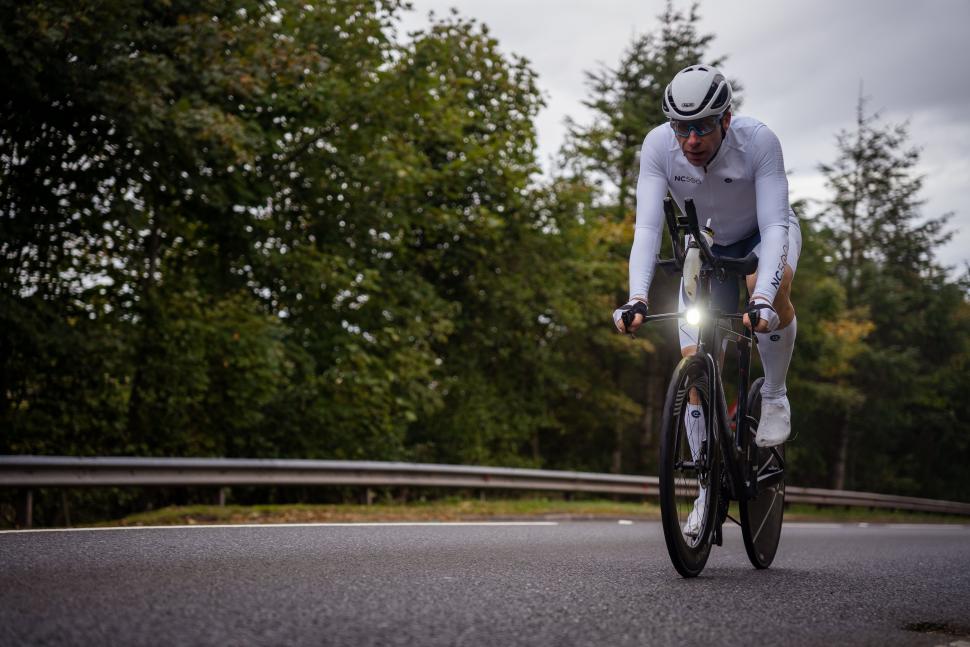 We didn't get a clear view of the shoes that Beaumont was using for the effort, but we do know that Shimano RC902 S-Phyres are his usual go-to and don't see any reason why he would change. The Boa dial placement is certainly in keeping. 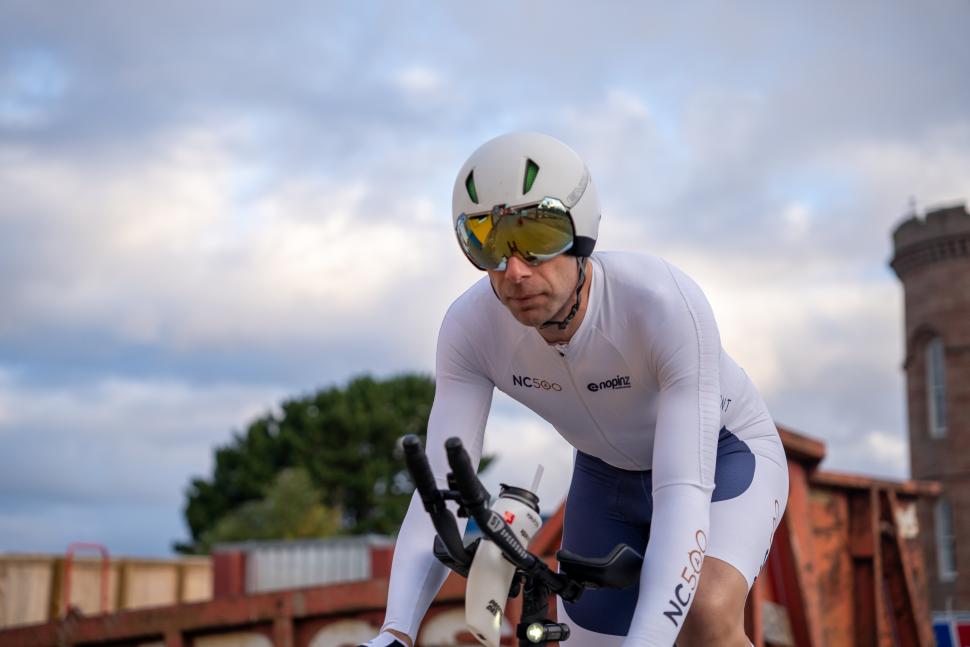 Beaumont used two helmets during the ride. The aero lid shown above is an Endura Drag 2 Zero Aeroswitch helmet, which was used with both a tinted mirrored visor and clear visor, both of which attach using magnets. He was also seen using an Abus Gamechanger and Oakley Jawbreaker glasses. The Gamechanger is also an aero helmet, but designed for road racing rather than time trialling. 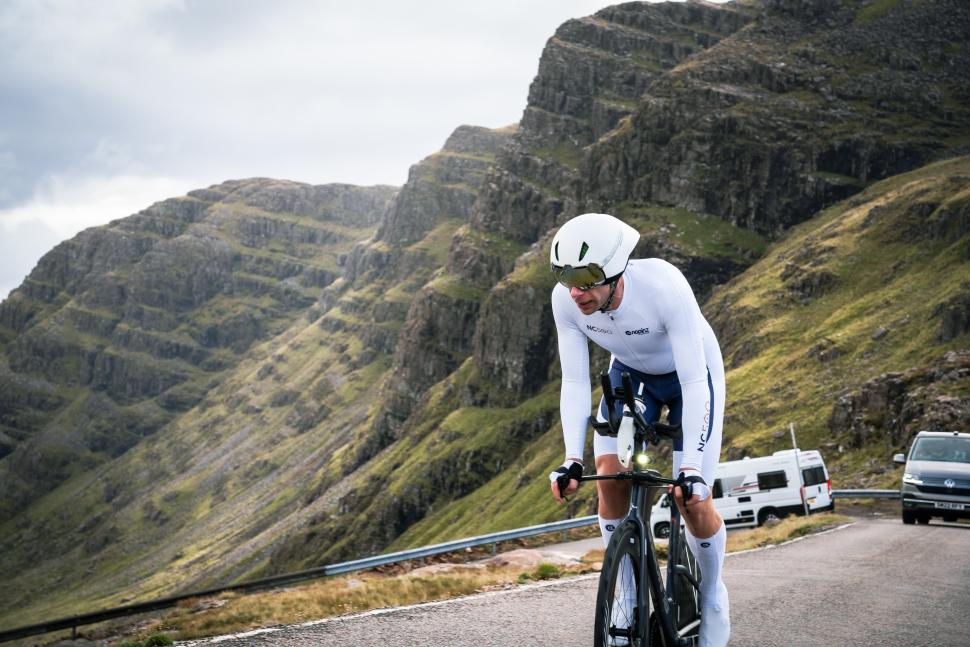 You can view all the details of the North Coast 500 route, elevation and Beaumont's speed profile on komoot, and we've embedded it for you below...

How do you rate Beaumont's setup? Let us know in the comments section below...