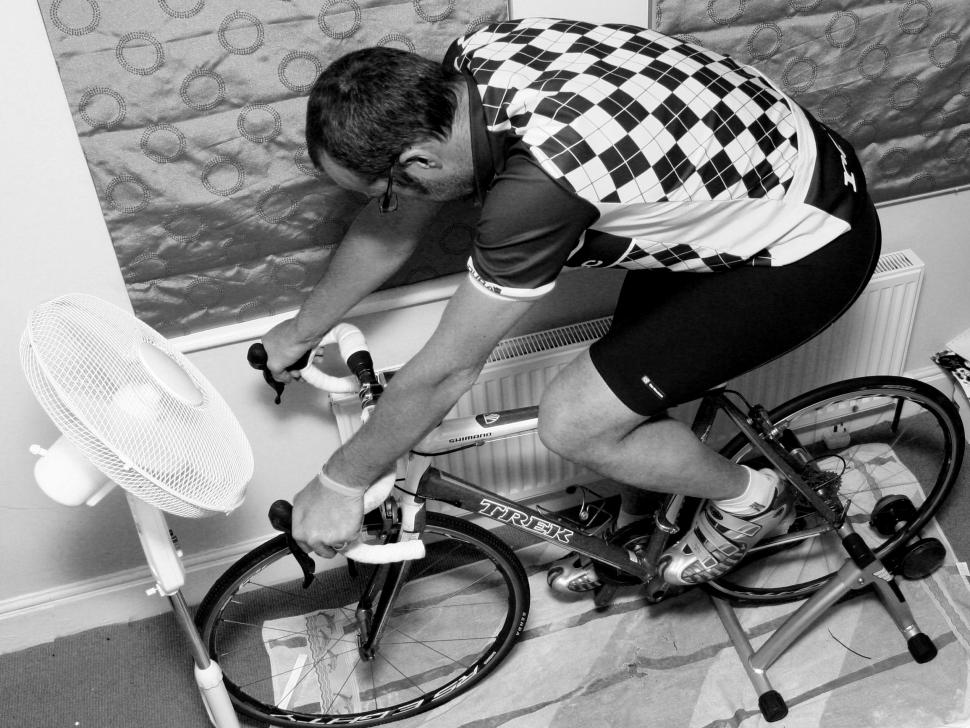 Turbo training pic © Vicki Atkinson
Who coaches the coach when the coach wants to go faster?

But I don’t coach myself.

Because it’s been what I do for others – like Dave, up there – and I haven’t wanted to look at my own riding in the same detail. But things have changed and the figurative fan has been hit by the figurative shit.

So what am I doing?

In 2014 I rode over 11,000 miles, mainly because I could. And I gained a massive boost to my bike fitness. Probably became fitter than I had been since my mid twenties. I chased KOMs, rode up big climbs, rode all day if I wanted to, hurt as many people as possible on group rides and just loved the bike.

In 2015 I decided to race again, took out an open license and hit the road race scene in Ireland. My goal was to move up to A3 (3rd Cat) by the end of April. I was 6 days late, but did it. And I did it by just riding my bike loads, because I could. I also did about half a dozen interval training sessions when I realized that most races would end up in a sprint. I wasn’t just doing junk miles though, I was riding hard as much as possible.

Funny enough, when I moved up to A3 I raced alongside a club mate who I was coaching: he was kicking my arse, and making me chew the stem most weekends. The bug had bitten. By the end of the season I knew I wanted to be more competitive in 2016, so I made the decision to hire a coach

I actually seriously considered asking someone else coach me, although that is what I am confident to do for many others. Simply to avoid the temptation to duck out, shirk a session, or make excuses. Then I had a word with myself and made a plan.

A problem with racing in A3 is that it’s often with A1 and A2 riders (1st and 2nd Cats) and also junior internationals - I’m going to be 50 next year. Not that I’m saying ‘game over’, but I need to be smart and realistic. The most likely way I’m going to be close to points and results is to be a decent sprinter.

So that’s the plan. A load of barbells and racks were sourced from gumtree and installed in the cellar, along with the turbo trainer. For 10 weeks my focus will be on weight training, and cycling will be something I do to stop being bored while I recover from the previous days squats and so on. Each weight set is followed by a 5 sec rev-out on the turbo to enhance transfer of resistance training to cycling.

I already know what to eat and when to eat it, now I’m following my own advice to others and am confident that by the first weekend in March I’ll be lean and (relatively) quick. And surprisingly I’m really enjoying the process of setting the plan, putting the system in place, reviewing response, changing the plan, and also seeing gains already. The tough bit is cutting my cycling hours back when it would be easy to just ride. I’m missing club group rides as the need right now is for recovery from weight sessions rather than smashing out more hard miles – that will come later in the plan.