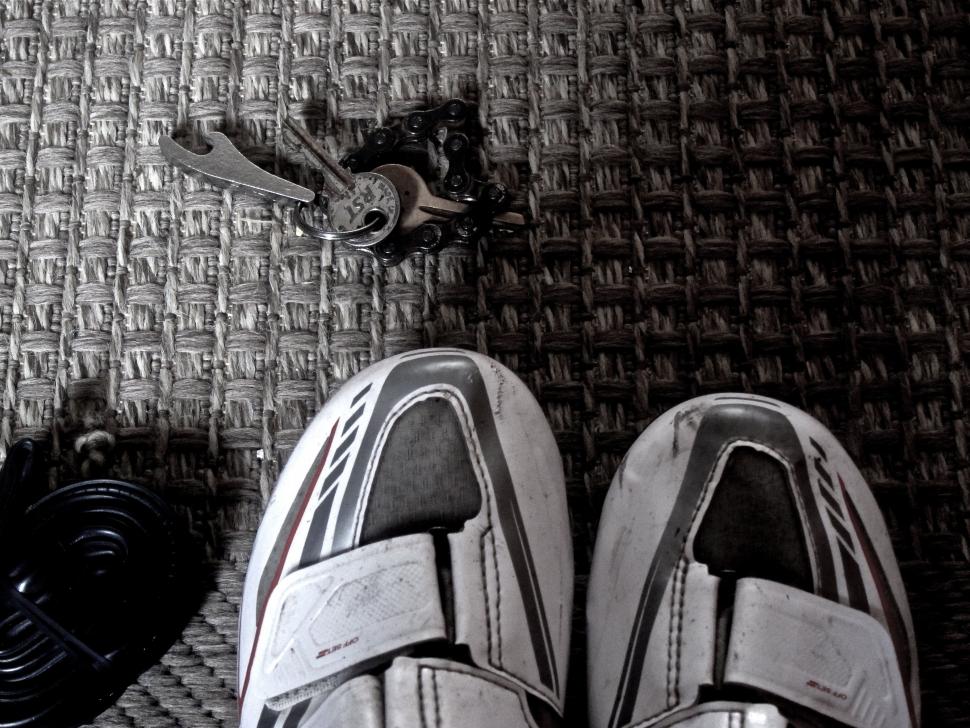 VecchioJo is going for a ride, isn’t sure when he’ll be back

It’s often pithily quipped that if you wanted to murder someone and get away with it then the easiest way is to run them over in a car. Kill a person when you’re behind the wheel and you’ll pretty much escape scot-free; come up with some kind of excuse, it doesn’t have to be too elaborate, the sun was in your eyes, it was a bit dark, they came out of nowhere, they didn’t have lights/hi-viz/helmet, SMIDSY, whatever, it can be any old tosh, you don’t have to dream up a weaving Agatha Christie scenario of alibis or even hide the murder weapon. You’ll get a bit of a slapped hand, don’t do it again. Actually, you can do it again if you like, that’s fine. A small fine at most.

Swing that around, flip it and turn it on it’s head and you could argue that the easiest way to take your own life and leave behind a little less aftershock, distress or the hushed whispers of social stigma would be to do it on a bicycle.

Who hasn’t had that moment when you’re stood in the middle of the road, at that junction waiting to turn right, and you wonder what would happen if you just pushed gently but firmly on the pedals and swung artfully into the path of that on-coming truck. Walken's Syndrome. A simple and effortless move. Crump. Oh just once to live in a Road Runner cartoon and be able peel your flattened self off the radiator grill, maybe stagger off in a comedy concertina fashion, hold your mouth and nose and breath out hard to pop your eyes back, no harm done. Just to see what it felt like, just that once, no nasty final repercussions. It’s healthy to merely imagine. Isn’t it?

There have been enough moments in my miles where death has crossed my path and it would have been the easy option to just cycle into it open armed and eagerly shake its boney hand in greeting. I’m currently going through one of those patches where every single ride requires some kind of dramatic evasive action to duck the speeding texting erratic scythe of the reaper. All it would take is to not constantly be aware of every situation, not to know when to cover the brakes in anticipation, deliberately ignore that sixth sense, be joyfully oblivious to everything around you. That would be nice, the joyfully oblivious. Instead of tensing and hauling on the levers and giving in to instinct and luck to find the gap through to a future, just breathe out weightless, peacefully close your eyes and relax gracefully and gratefully into the inevitable. Goodnight, thank you, leave all my organs to others. Let friends rummage in the bike shed for whatever they fancy. Sink into the sweet release. No flowers, money to charity. Easy. Easy way out.

Obviously no-one would suspect it’s deliberate, why would you do such a thing? A cyclist could never have such premeditated thoughts, they’re happy people aren’t they? Riding a bicycle makes them rapturous, lalalala, hello birds, hello trees, hello sky, lalalala, they’re always banging on about it. Felt a bit rubbish, went for a bike ride, cheered up. Lalalalala. Fit, healthy, saving the bloody planet with that smug grin on their faces. Surely nothing could possibly be wrong? No-one would suspect a thing.

You could do it in full cycling regalia to show you’re a serious type; that you’re a Proper Cyclist, obviously knew what you were doing, what happened was just unlucky. Make sure you wear a helmet to give the thin veneer of some preservation intent though. Smoke and mirrors, smoke and mirrors. Friends would say it’s the way he wanted to go, on a bike. No-one would ask any questions, just a bit sad really, others would even be grateful that you’ve gone, lycra lout, bloody cyclists.

Or if you can’t be bothered to get dressed up just pop out in normal clothes, maybe slip on a neon yellow vest flapping in the breeze, and mix it up in the rush hour traffic, play chicken with lorries. Filter up the left on the handy bike lane they painted for you there. Use the bloody bike lane. It would only be a matter of a very short time, it would be unavoidable, it would just be one of those things. A statistic. Some would even be grateful that you’ve gone, bloody cyclists, running red lights etcetc. A small article in the local paper with a stock photo, something that slips off the bottom of the web-page by lunchtime.

All too easy, before too long any discussion would have descended into the usual name calling, victim blaming, infrastructure damning, pointing and shouting whilst any investigation into the real reason gets buried under the noise. As always. Handy that. Get away with it scot-free.

I’m going out for a ride now, if I arrive back home it’s because I’ve decided that I want to survive another day. Unless someone else has better ideas.