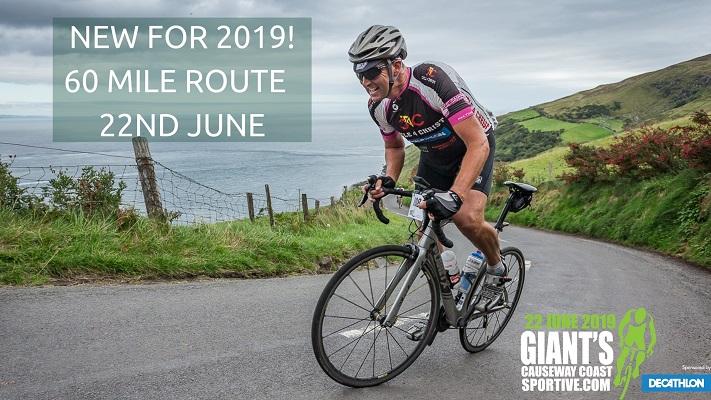 Entries have now opened for 2019's Giant’s Causeway Coast Sportive. Returning to the north coast for its 9th year, the Giant’s Causeway Coast Sportive, in association with Decathlon, is set to make its arrival to the North Coast of Ireland earlier next year, with the event now taking place on Saturday 22nd June instead of September. A new 60 mile route has been added to the original three routes (35 mile, 85 mile, 115 mile), and each of the four cycling routes have been created with every level of cyclist in mind.

Widely recognised as the most scenic sportive in Northern Ireland, participants will be blown away by all there is to offer on any of the four cycling routes. The Giant’s Causeway Coast Sportive consistently draws over 1,000 participants every year from all parts of Northern Ireland, Great Britain, the Republic of Ireland and further afield, who flock to the North Coast of Ireland to take on this challenge.

The event starts and finishes in Ballycastle, a picturesque seaside town situated along the stunning North Coast of Ireland. The route provides participants with a great opportunity to cycle along the Causeway Coastal Route, which is one of the most spectacular stretches of coastline in Europe and was part of the 2014 Giro d ’Italia route.

The four different routes are catered to different levels of cyclist. The shortest route, which is 35 miles, is an excellent way for beginners to complete their first sportive, whereas the new 60 mile route is for cyclists who want to challenge themselves beyond the 35 mile option. The 85 mile and 115 mile routes are ideal for the more serious cyclists with testing hills of up to 20% gradients.

The 35 mile 'Causeway Coaster' route takes you past Carrick-a-rede rope bridge, which features a 100ft drop to the ocean below, and the world-famous Giant's Causeway, the UNESCO World Heritage Site that boasts 40,000 basalt stone columns and spectacular views. Participants also pass Bushmills, the home of world's oldest whiskey distillery Bushmills Distillery, as well as the Dark Hedges, an incredible row of beech trees made famous by hit-show Game of Thrones. The new 60 mile 'Across the Coast and Glens' route also follows this course, while also taking in more of the stunning north coast scenery.

The 85 mile 'Glens and Coast Route' features a rugged coastline and takes in the romantic landscape of the Glens of Antrim. The route begins with a steady climb through the magical Glens of Antrim to Glenarm before heading north along the world famous Antrim coast road. At Cushendun, cyclists can decide whether to tackle the infamous Torr Head or not.

The 115 mile 'Giant Killer' incorporates both routes mentioned above and provides the ultimate cycling challenge - it is widely regarded as one of the toughest sportive routes in Ireland, with many cyclists wishing to add it to their list of accolades.

Cyclists will know Torr Head by reputation if not experience and the final feed station sits at the foot of this epic series of five climbs, where cyclists debate whether to tackle this behemoth or opt for the bypass, avoiding Torr Head. Torr Head covers 10 miles and features 832 feet of climbing, with a gradient of over 20% in places. Riders are pushed to the brink as each climb appears to be the last, but every second improves the view over the Irish Sea and, on a clear day, as far as Scotland.

Participants can also push for the esteemed title of King or Queen of the Mountain. This specially timed 1.28 mile section begins on the final climb as you approach the home run back to Ballycastle.

All routes are marshalled, and well-signed, and there are numerous feed stations along the route which provide participants with delicious food to give them a boost. The finish line in Ballycastle provides participants with hot food and a chance to grab a hot shower and relax after completing their epic challenge! The stunning scenery, variation of routes, and atmosphere on the day make the Giant's Causeway Coast Sportive one of the most important dates in the Irish cycling calendar.

To enter and for more information, visit www.giantscausewaycoastsportive.com/