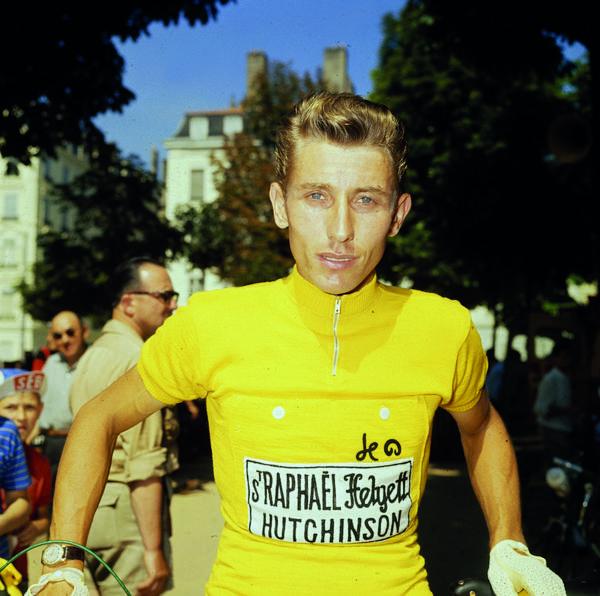 This Saturday 5 July marks the start of the 101st Tour de France in Leeds. With the race and the yellow jersey coming back to the UK for the first time since 2007 – and to Yorkshire for the first time ever. With luck the three UK stages will produce some truly memorable moments for the crowds and the riders taking part. Whether they will be good enough to  make it in to a future Top 10 Tour moments - we'll find out soon enough, for the moment though here's our Top 10. You may choose to differ…

In the first year, just 60 riders started and only 21 finished the 19-day, 2,428km route. It was won by the French rider, Maurice Garin, who stated: “The 2,500km that I've just ridden seem a long line, grey and monotonous, where nothing stood out from anything else. But I suffered on the road; I was hungry, I was thirsty, I was sleepy, I suffered, I cried between Lyon and Marseille, I had the pride of winning other stages, and at the controls I saw the fine figure of my friend Delattre, who had prepared my sustenance, but I repeat, nothing strikes me particularly. “

Garin also won the 1904 race but was disqualified for cheating along with eight others.

Mountains were introduced for the first time in 1910, with the race’s eventual winner, Octave Lapize, famously shouting “You’re all murderers” at the race organisers after scaling the unmade roads of the Col d’Aubisque in the Pyrenees on foot.

In 1911, the organisers ignored Lapize and added the Alps as well.

The Tour wouldn’t be the Tour without that yellow jersey and, according to figures from Le Coq Sportif, the official supplier of the jersey since 1951, there have been 2,036 official jerseys worn by 276 riders since it was introduced on the 11th stage of the 1919 event.

The Frenchman Eugène Christophe, who had led the race from stage four, would be the first to wear the jersey, but lost it stage 13 to the race’s winner, Belgium’s Firmin Lambot.

The jersey has become one of the most iconic trophies in sport with the 1988 winner, Pedro Delgado saying: “They give you famous cups and they pay tribute to you, but really the special gift is the yellow jersey. You’ve sweated and suffered in it. You’ve peddled so hard on that road, in the sun and the rain.”

You can see Delgado and Bernard Hinault discuss the yellow jersey in Le Coq Sportif’s video, below.

Shortly before the 1961 Tour, Jacques Anquetil made the bold declaration that he would hold the yellow jersey throughout the 21 days of racing. With two former champions in the field, Charly Gaul and Federico Bahamontes, this would be no easy ride.

Anquetil’s also won in 1962, 3 and 4 was the first rider to win five times, the first to win four in a row and the first to win all three grand tours. His average speed from the 1962 tour would not be beaten until 1981. 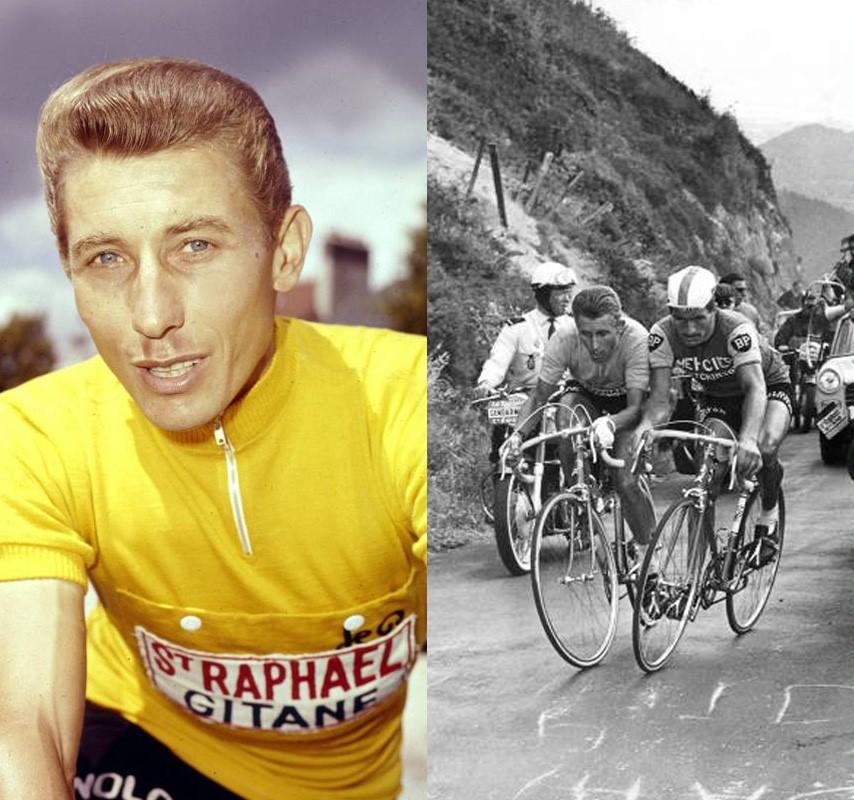 No list would be complete without the Belgian Eddy Merckx, and his first of five Tour wins with arguably the most dominant displays of the race. It is famous for being the only year that one rider has taken the yellow, the green and the polka dot jerseys (the GC, points competition and the King of the Mountains). But it is particularly memorable for stage 17, a 214km mountain stage that saw Merckx launch a solo breakaway 140km before the finish line and hold it to the finish line in Mourenx. 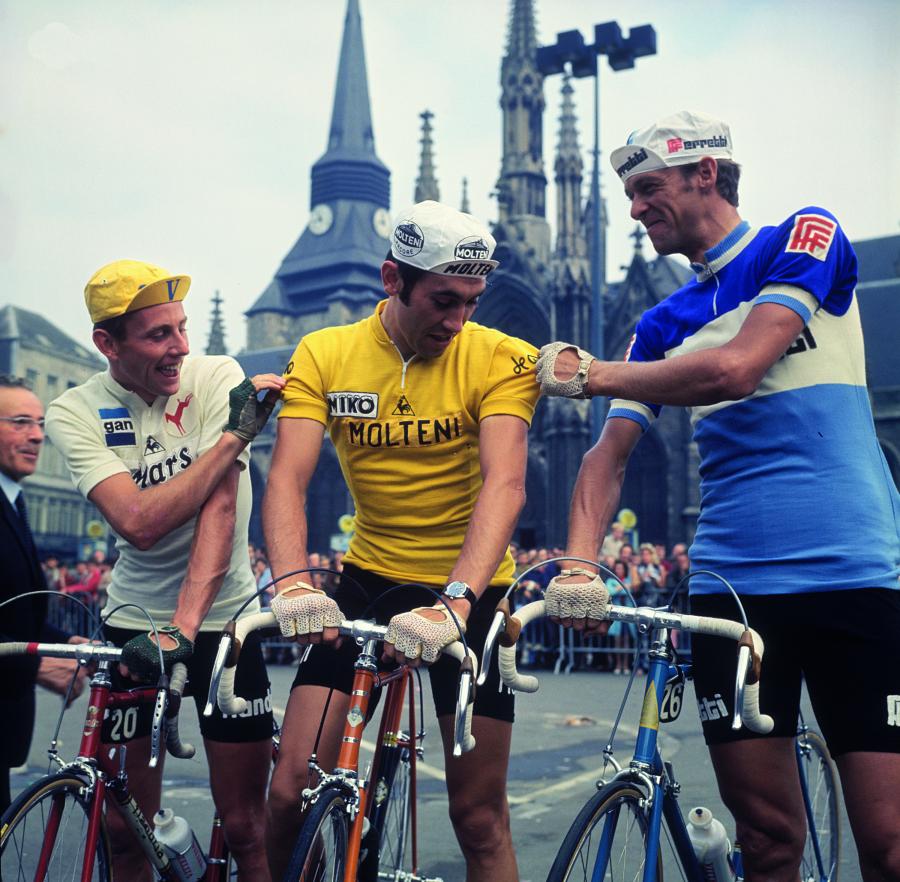 Eddy Merckx in the yellow jersey

1979 remains the only year to finish on Alpe d’Huez twice. The 1,803m mountain, which a recent poll declared Europe’s favourite, gave Joacquim Agostinho and Joop Zoetemelk stage victories. But it was Bernard Hinault who made his mark on the race taking both the yellow – his second of five – and green jerseys.

The rider nicknamed 'the Badger' is arguably the best, and still the last, Frenchman to win the yellow jersey.

He recently said there are two types of winners of the yellow jersey: “The rider who sleeps with it, because he’s won and he’s so scared of losing it [and] the one who puts it in the cupboard at the other end of the room and then goes and looks at it, thinking it’s mine now, no-one can take it from me.” 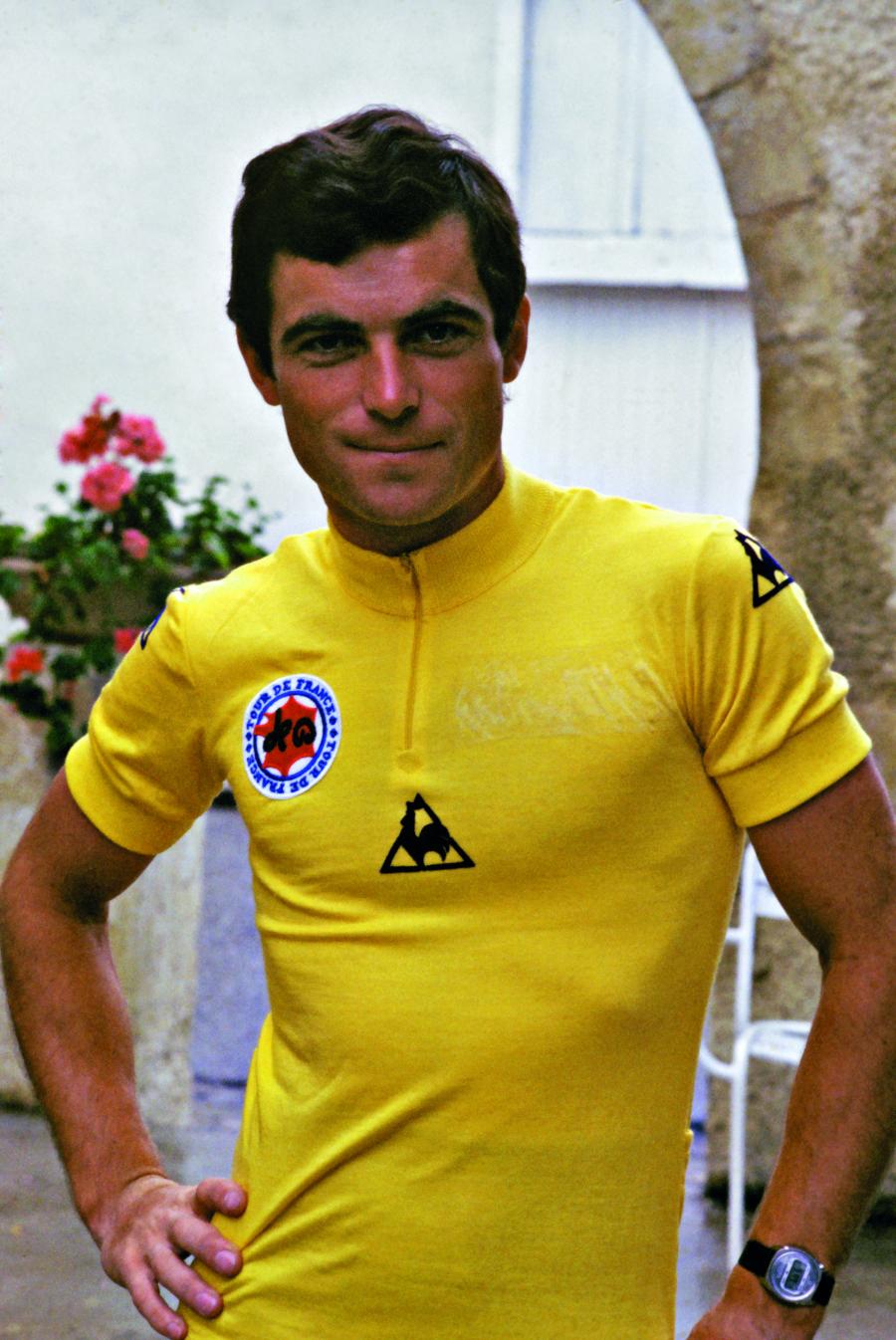 In 1985 Greg LeMond followed team orders to return from a breakaway that, many say, would have given him a defendable lead in the GC and help his teammate, Hinault, to victory. In 1986 the favour was meant to be returned, but the Frenchman hadn’t read the script. The two battled up the mountain’s 13.1km with an 8.19% average gradient, 21 hairpin turns and exceptionally steep ramps. Hinault forced his wheel across the line first, but accepted LeMond – who would go on to take the winner’s jersey in Paris – as the better rider. 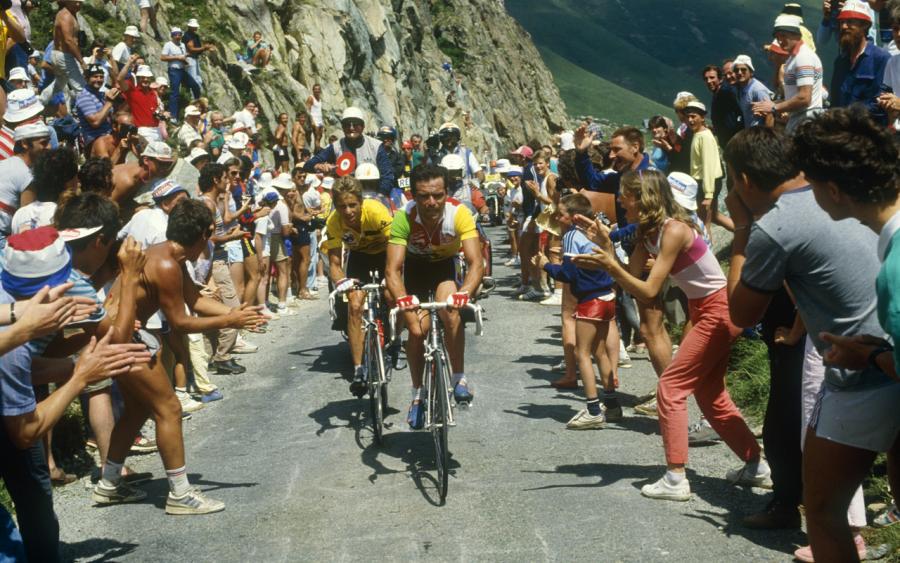 1998 is famous for the Festina affair, which began with the arrest of the soigneur Willy Voet and ended up revealing just how widespread doping within the peloton was – retrospective EPO testing in 2004 on the 60 remaining samples returned 44 positive results – leading to the 1998 race being dubbed the Tour du Dopage.

But it is also the year Marco Pantani won the yellow jersey (and the Giro’s maglia rosa, the last rider to win both in the same season). The Italian rider, who died in 2004 of a cocaine overdose, divides opinion but was arguably the best climber of his era.

His tours may have been stripped from him but one moment involving Lance Armstrong from the 2003 Tour will remain a firm favourite for many. The 2003 race was one of the hottest on record and the melting road surface of the Col de la Rochette caused Joseba Beloki to hit the deck, leaving Armstrong with nowhere to go … other than off the road, though a field and eventually jumping a ditch to re-join the race seamlessly.

Just four British riders had worn the yellow jersey before David Brailsford launched Team Sky in 2009 and made the declaration to win the Tour clean with a British rider within just five years: Tom Simpson (1962), who would tragically die on Mont Ventoux just seven years later, Sean Yates (1994), Chris Boardman (1994, 96 and 98), and David Millar (2000), who is also the only British rider to wear all four TdF jerseys.

2012 saw Sky’s Bradley Wiggins take the yellow jersey on stage nine with British riders winning over a third of the stages and taking the top two places on the podium. The 2012 race is also famous for the animosity between Froome and Wiggins – and the public spat on Twitter between their partners. 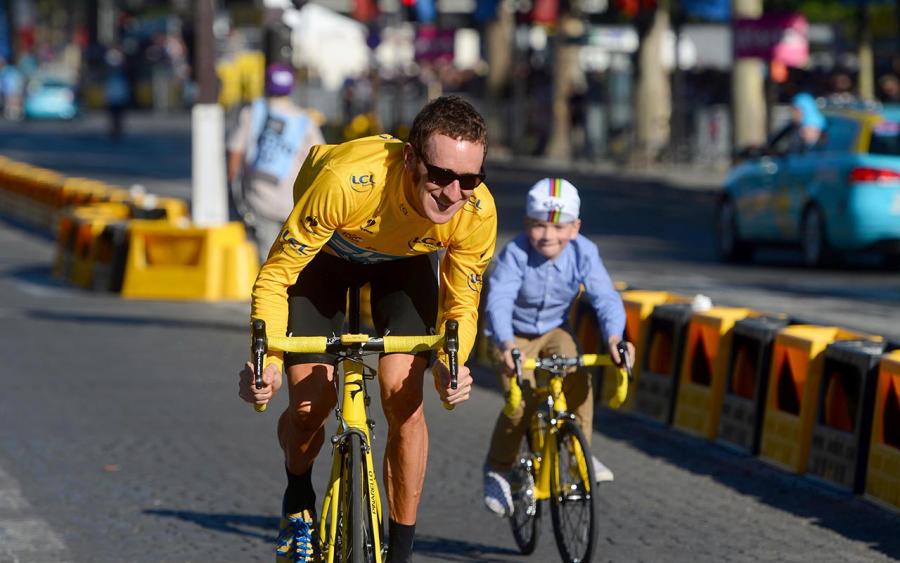 Bradley Wiggins and son Ben on the Champs-Elysees

These are our favourite moments, but what do you think, does Gino Bartali (1938 and 1948) deserve a mention for his humanitarian work in the war? Should we have mentioned Landis’s ‘magical comeback’ in 2006 or Indurain’s five-year domination (‘91-‘95) of the peloton? Let us know in the comments below.