One of my normal training rides is a 90km circuit taking in the Ryal, a steep climb in rural Northumberland. I’m not terribly au fait with geology, but I’m pretty sure this is not a volcano. Mount Teide, on the other hand, is very much a volcano, the world’s third tallest (measured from the sea bed, anyway), and just as the Ryal attracts roadies because of its ramp-like steeps Mount Teide is a magnet for local riders.

Not that I could find any – when I rode up Mount Teide, I did so alone. None of my companions fancied a 90km ride, with 2,300 metres of climbing, on an active volcano that is due to blow any day now. Funny that.

Tenerife is the largest of the Canary Islands, and despite it being marooned off the West coast of Africa it’s part of Spain. Most of the five million tourists who arrive on the island each year are here for fun and frolics. Not us. We were there to work. Not (just) on our tans but on our fitness, too.

When tourists are light on the ground there are still plenty of athletes here – the island’s climate means it’s perfect for training. Tenerife is on the same latitude as the Sahara desert and enjoys settled, clear conditions almost all year round. Not for nothing is Tenerife known as the “Island of Eternal Spring”, although in the 15th Century, because of its propensity to be consumed by molten lava, it was known as the Isla del Infierno: Hell's Island) 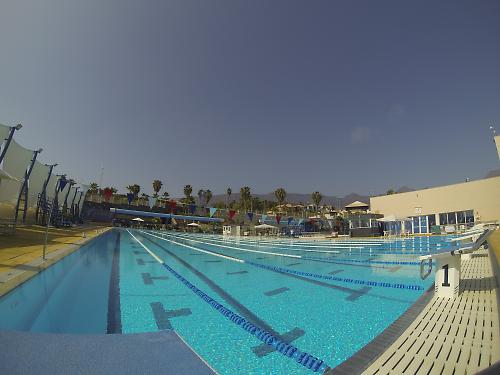 There's nothing hellish about Tenerife these days though, especially at Tenerife Top Training where we were based. T3 is a sports complex at La Caleta de Adeje on Tenerife’s southern coast, and hosts athletes from a wide variety of sports, including football, volleyball and tennis. With two year-round swimming pools (25m and 50m) T3 also attracts swimmers and triathletes; the complex also has an indoor flume channel, a body of fast-moving water for resistance swim-training with video analytics. 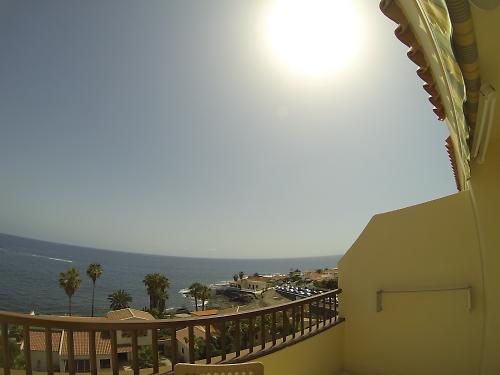 When not wearing high-tech underwater belts for the aqua analytics we spent time riding on the rolling roads close to our hotel, Hovima Jardin Caleta. But these rides were short. I wanted something a little more challenging; something like the dominating, unmissable 3,718m Mount Teide.

I was unable to persuade anyone to ride with me, or even show me the way, so I took a map and set out on my own. I started at La Caleta on the sea front, close to the T3 centre. There are alternating gradients as you wind your way through the urban sprawl before the houses die away and the gradient flattens as you run parallel to the ocean to your left and the volcano veering upwards to your right.

At Guia de Isora you have the option of  turning right and missing out some of the climb, but this is certainly not an easy option: there are gradients of 25 percent and it’s not for the faint-hearted. But I hadn't come all this way to take a short cut so I continued to the right turn at Chio, 5km further on.

The higher you climb the more spectacular the view becomes, with the resort of Las Americas seeming more attractive the further you ride away from it. As you leave the small pockets of civilisation dotted across the mid-section of the volcano you begin to ascend through clumpy forests of pine and juniper amongst the lava fields, the road surfaced with mostly pristine tarmac.

The undergrowth begins to fade the further you climb until you are in an open lunar-like landscape, with clear views down to the sea. Heat-haze ripples add to the other-worldy feel. This is a high-altitude desert – beautiful, but barren. So barren that scientists use the upper slopes of Mount Teide as a test bed for instruments that will get used on Mars. 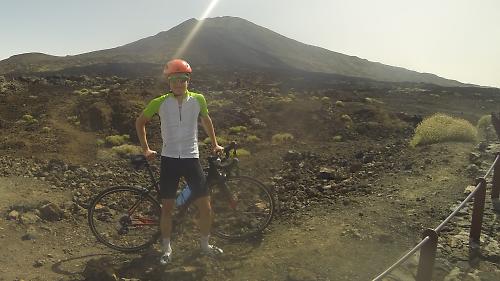 There’s still some climbing to do before you reach the plateau, which is the crater. Once you see coaches unloading selfie-snapping tourists, you know you’re at the highest point on the road.

The top of a barren volcano isn’t a great place to run out of water. You know, like I did: I’d used all of my two bottles on the climb. One of the good things about Tenerife being a tourist island is that there are shops dotted about, even in the middle of nowhere, so a short way down the mountain I was able to get some water for the long, breezy descent back to sea level.

I may have been alone on the day, but Mount Teide is often teeming with cyclists, including the greats. Chris Froome, Alberto Contador, and Vincenzo Nibali have used the mountain's slopes to hone their fitness and many other top pros regularly train on Tenerife.

T3 also attracts premiership football teams, but its facilities are also available to amateur sports folk. Soon you won't even need to bring a bike – later this year T3 will be adding a bike station equipped with 100 Cannondale road bikes and 50 Cannondale mountain bikes. T3’s website says “… our athletes can execute their training under optimum conditions and prepare perfectly for their personal goals.”

Especially if one of those goals is climbing a volcano.