He That Is Mighty, Hath Done Tired Things To Me… on the Magnificat preview ride

VecchioJo gets a sneak peak at this year's Magnificat, all 127 miles of it
by VecchioJo

It’s a fresh Spring morning and the only thing troubling the sky is the welcome return of the aircraft contrails, it’s going to be a good day. It’s going to be an even better day for a big bike ride.

We’re at Newbury Racecourse, the new home of the Magnificat sportive for a preview ride of the 127 mile course (other distances are available), killing time looking fearfully at the large wiggly circle highlighting the route on a road map while knocking back coffees and orange juice. And biscuits. It is going to be a good day. The racecourse looks to be a great venue for the start/finish arena, plenty of room to mill about and collapse on the floor at the finish if the sun’s out on June 13th, and enough covered space to hide under if the weather’s suitably British.

The Verenti Rhigos bikes that we're being lent for the day are tinkered with to fit, pockets are stuffed with bars and gels and water-bottles filled with energy goop courtesy of Torq and after a quick chat with the Mayor we set off, quickly climb away and out of town and in no time at all are on quiet rolling country back-roads. Lovely. Our petite peloton of a dozen or so riders formed of invited journalists, guests and guides is accompanied by a lead car that helps clear the way and followed by a support vehicle for climbing into the back of if the distance takes its toll and a Mavic mechanics van, it could almost be a stage of the Tour Of Britain, but slower. 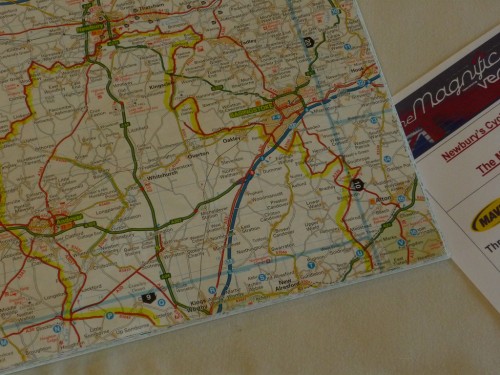 The first test comes at only 10 miles into the ride, well, the first three tests to be precise, as the triple whammy of Walbury, Linkenholt, and Conholt hills arrive in quick succession. None of them are knee-crushingly hard, the views of a blossoming countryside are wonderful and after the third hill there’s a descent that levels off to a gentle downhill cruise that seems to go on forever. Make the most of it.

Just to get you in the mood for some food there's a steady climb just previous to the first feed station at 38 miles, be sure and stock up on fresh sandwiches and cakes here, you'll be needing the energy to get you across the lumpy 42 miles to the next feed, and then the further 25 to the last-push-for-home top-up station at the top of Hannington Hill. With six water stations placed roughly every 20 miles as well there's no excuse not to take care of yourself; even on this fresh Spring day we were taking on water and snacks at quite a brisk rate, so if it's one of those Summer's days you've been dreaming of you'll be gently tarmac-baked and need to stay fed and well-watered. Without going into a detailed mile-by-mile breakdown of the route I think it’s safe to describe it as relentlessly undulating, the 2,800 metres of ascent over the 127 miles might be a clue, as will a peek at the saw-tooth route profile. There's nothing that is actually weepingly vertical, even the hill out of Steep isn't as harsh as the name would suggest, and the fact that Old Winchester Hill is actually signposted isn't a measure of it's consequence, but it's an endless roller-coaster of short climbs, plenty of what were optimistically phrased as "uphill glides" and long long drags that will slowly but surely wear you down, like some sinister pedally water-torture. There really is no let-up, the hills keep on coming with even some pleasant little stings thrown in at the end, just to rinse the legs of any willing that they may have been left hidden somewhere safe.

As a reward for all the climbing there are some speedy laugh-out-loud descents that possibly warrant going back up to try again another day, too many swooping corners that make your soul go "wheeeeee" and enough picture-postcard villages to distract your brain from your throbbing thighs for a short while. A big plate of praise should go to Magnificat organiser Ken Robson for managing to knit a route around a busy part of the country that spends so little time on major roads and instead meanders through some of the most chocolate-box scenery the South Of England© has to offer. Unfortunately some of the roads are suffering the scars ravaged upon them by the winter, but that's unavoidable as you'll know, and keep a wary eye out for gravel that may have caught a certain rider out a couple of times, ahem.

As the majority of Sportives top-out at 100 miles the Magnificat’s decision to up the ante by adding a further 25% is a stroke of evil genius and should make any decent cyclist’s calves twitch tumescently while punching a spike in the BPM of any casual Sportivista. And even though it is Down South, where everyone knows there aren't any proper hills it's a course that will make even the most hardened of grimpeurs wince a little bit. Of course, if you don't think you can handle the full 127 miles there's always the 80 mile Route80Cat and 51 mile Communicat options to use as a springboard to completing the full distance next year.

If you want a a good day out best get to work on those climbing legs now. Not tomorrow, now.

I was lent a Rhigos.03 for the day and I won't go into too much detail as we just reviewed it, but it looks pruddy enough although the snobby Carbonieri might say that the lugged construction is old technology it's fine enough for Mr Colnago so it's okay with us and at £1,400 it's right on the money.

On the road it's light enough, with a skippy little character that's keen to clip along at a pace and yet planted enough to see off a two-wheel drift with ease and stay upright for a front wheel washout both thanks to gravel. There's nothing to complain about the component package, the compact chainset was welcome towards the end of the ride, and even the upright “sportive” geometry with a fistful of ahead-spacers under the stem wasn’t too much of a bother to this long-and-low roadie. The only downsides I could find was that my bottom didn't get on too well with the saddle but that's a simple swap, and the SRAM double-shift system sometimes made my brain hurt, but then some days I have trouble walking and talking at the same time. The biggest accolade I can give the bike is that after a big long day in the saddle with only the most basic of adjustments being made to make the bike fit with the saddle being put at the right height and then shifted back on the rails a bit my body was not completely wrecked after 125 miles, my legs hurt and my arse was a little bit tender but I had none of the traditional long ride aches and pains anywhere else. Good work Verenti.

For information and to register for the Magnificat and its shorter siblings point your browser at www.cyclegb.co.uk.

And for the low-down on Verenti bikes head to www.verentibikes.com.