The Maple syrup producers of Quebec reckon it's the next big thing in sports nutrition...
by Jez Ash

If you’re riding more than a short distance then your energy intake becomes one of the most important elements in keeping yourself going.  So while a typical commute might not require much in the way of fuel, cyclists riding further generally take on energy as they go.

Anyone who’s ever ridden a sportive route the following day would conclude that the fuel of choice for cyclists is energy gels, but you might be surprised at how many pro racers eat a sandwich or drink a Coke during a race... 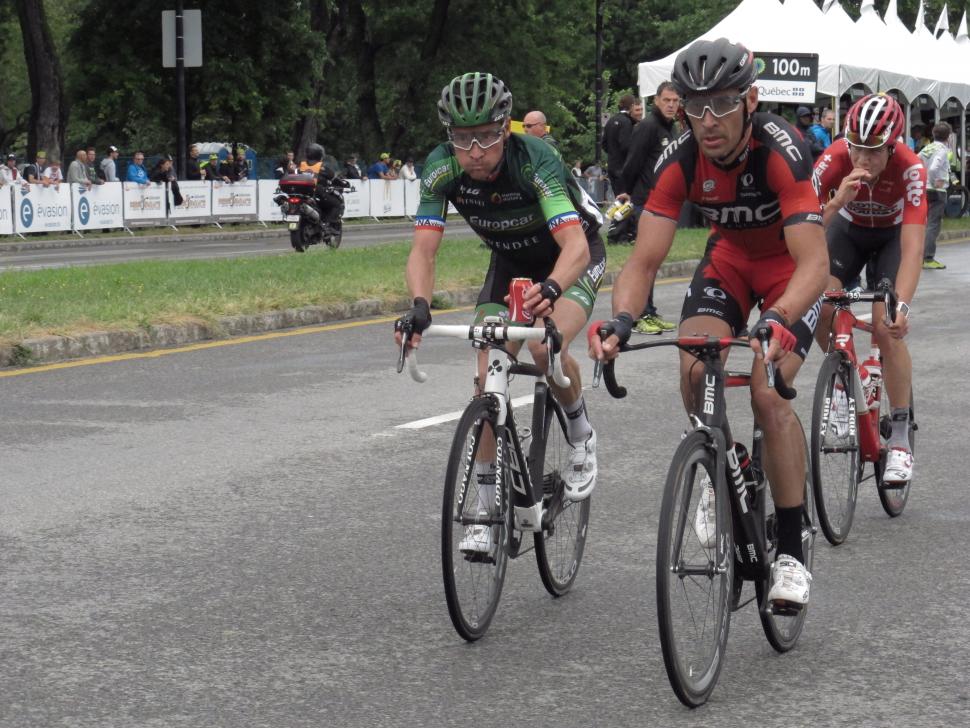 There's other energy sources being investigated all the time. We were invited to Quebec, Canada, to see how maple syrup is being used in a range of new products aimed at the lucrative sports fuel market.

There aren’t many countries whose signature product is so synonymous that it appears on their flag.  Canada is the world’s biggest producer of maple syrup, and the majority of that comes from the state of Quebec: 75% of the world's yearly production of maple syrup comes from the province. It's a breakfast staple in North America, but most people don't use it for much more than waffles and pancakes.

The organisation (FPAQ) which looks after the interests of the producers is looking to to broaden its appeal, and this year it partnered up with the Fédération Québecoise des Sports Cyclistes (FQSC) to develop and promote products specifically for cyclists and endurance athletes.  As part of the deal, they also sponsored the UCI Grands Prix of Quebec and Montreal – the only two UCI WorldTour races in North America – with the winner of each race this year receiving his body weight in maple products.

Maple based sports fuel makes sense at a basic level: endurance athletes require energy, and there's plenty of that in syrup.  We met with nutritionists, chefs and scientists who told us that there's a lot of other good stuff in maple syrup too, including a load of different antioxidants, zinc and manganese - important elements for muscle recovery. It’s early days and there are just a handful of products on the market at the moment, including sachets of syrup that you’d use in place of energy gels.  Some have other additives or flavouring and others are pretty much just syrup with a little water and salt. I quite like the taste of maple syrup, though, so that’s no bad thing in my book.

In addition to providing support for companies making these products, the FPAQ has also been developing “make it yourself” recipes for sports drinks and energy foods.  I’m a big fan of home-made flapjack for economical and tasty on-road energy, so this approach really chimed with me.

The making of maple We learnt about the production of maple syrup too. Turns out it doesn’t come out of the trees like that; when it's tapped it is light and watery, needing to be boiled down to 1/40th of its original volume to form the syrup.  The unreduced "maple water" is also now hitting the shelves as a low-calorie drink, reminiscent of coconut water.  You can buy it in the UK, but only online for now.  It’s got a mild but pleasant maple flavour and is pretty refreshing when you drink it chilled.

Here’s a recipe for a sports drink that the FPAQ developed:

That’ll make a couple of water bottle’s worth and it’s pretty good – not at all sickly and with a pleasant but mild taste.  I’ve used this on some hard rides and it seems to do a decent job at keeping hydration, salt and energy levels up.

Testing at the coal face

On a recent trip to the Alps, we tried using some of the packaged energy products that we brought back from Canada. 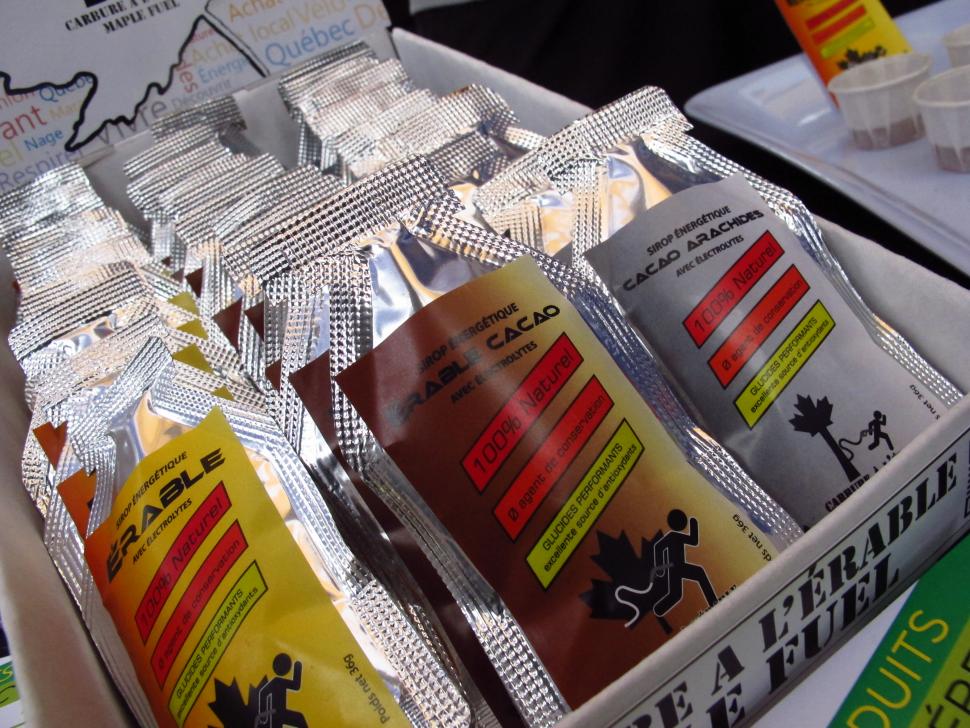 Maple Fuel is packaged like a gel and is mostly maple syrup, with some added water and salt.  There are versions with added cocoa powder and ground peanuts to give it a different flavour.   Their online shop thus far only deals with Canadian shipments.

Enduroforce is another concentrated energy source which claims to boost your endurance, thanks to maple syrup with ginseng, spirulina and sea buckthorn.  The packaging is interesting – it comes in a slim tube with a pointy end that looks like a felt-tip pen.  It’s apparently designed for one-handed access, as you just break the pointy end off with your thumb.  The flaw in that is that it then flies off into the nearest hedge, so I’d like to see some more work on this packaging before it is adopted more widely.  There was also a pure maple syrup product packaged in the same way. 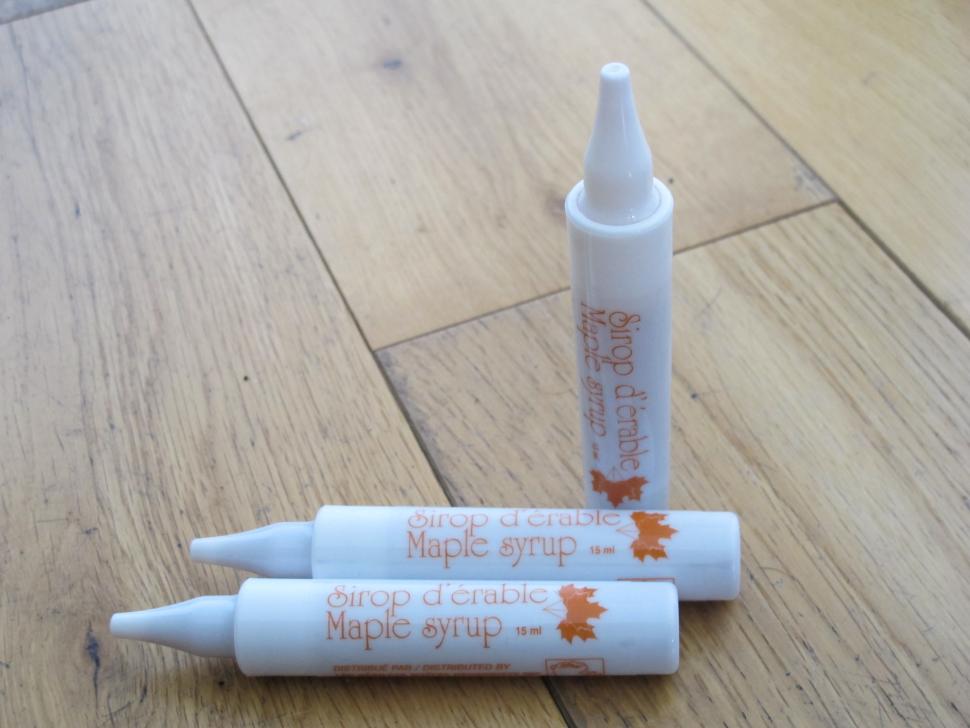 We found that all the maple energy products we tried had a pleasant flavour, certainly less artificial than the majority of energy products.  Perhaps unsurprisingly, there’s a high sugar content – notably more than some energy gels, which often provide carbs from a wider range of sources.  In use this can sometimes give you more of a noticeable sugar rush than with conventional gels, but we found that the energy was quickly absorbed and available when we needed it.

Another product being shown was maple kombucha, a sort of fermented tea.  I tried kombucha once and that was enough, so I’m not in a position to tell you whether the maple version is any less revolting, I’m afraid...

As well as pairing up the with WorldTour races the FPAQ is financially supporting three endurance athletes from Quebec that are aiming to secure places at the Rio Olympics.  We met one of them, Rémi Pelletier-Roy, a track-cycling specialist who also won the Montreal National crit race that took place the same weekend as the Grands Prix.  Rémi told us that like most Quebecois, he had eaten maple syrup regularly since childhood, and was pretty pleased to learn from the scientists that it could form part of his sports nutrition intake. 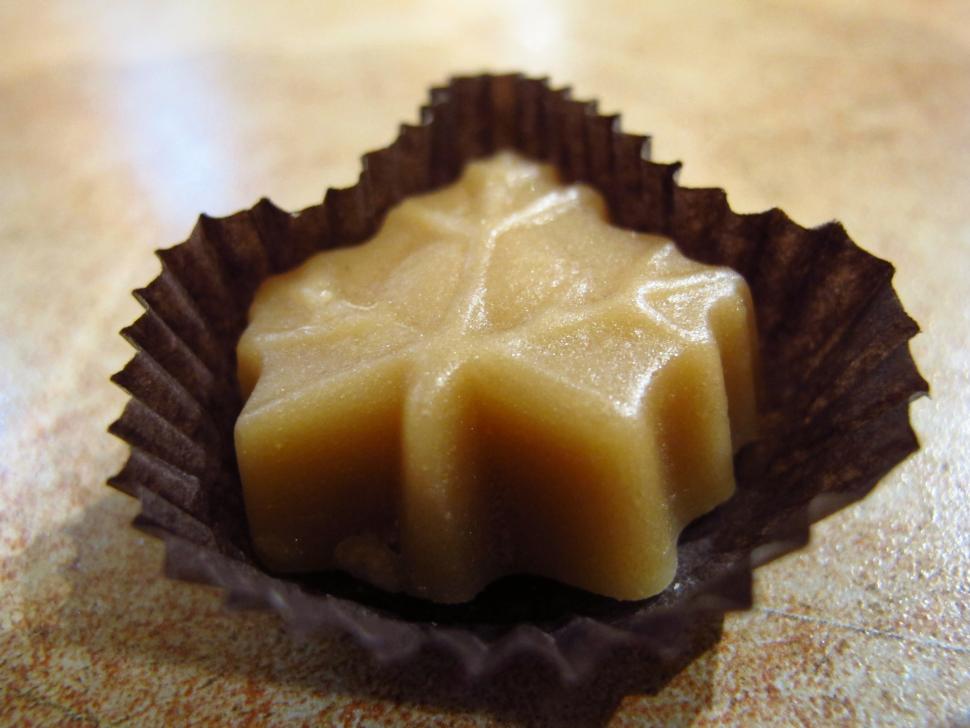 As I mentioned, the pre-packaged products aren’t really yet available much outside of Canada, but you can still make your own energy drink or flapjacks, which we'll be trying more of soon.  Or, if you’re more of an accomplished cook, there’s a raft of awfully tempting recipes developed with top Canadian chefs on the We Love Maple website too – Maple-Laced Pork Wellington Tourtière, anyone?

In the UK, maple syrup is relatively expensive, but I found that you could use relatively small quantities in sports drinks or flapjacks and still taste it.  Maple water is available online and if you like coconut water you’ll probably enjoy it.  We also tried a few other products like maple butter and maple vinegar, both of which you’d probably struggle to find in your local supermarket yet, which is a shame, as they’re delicious.