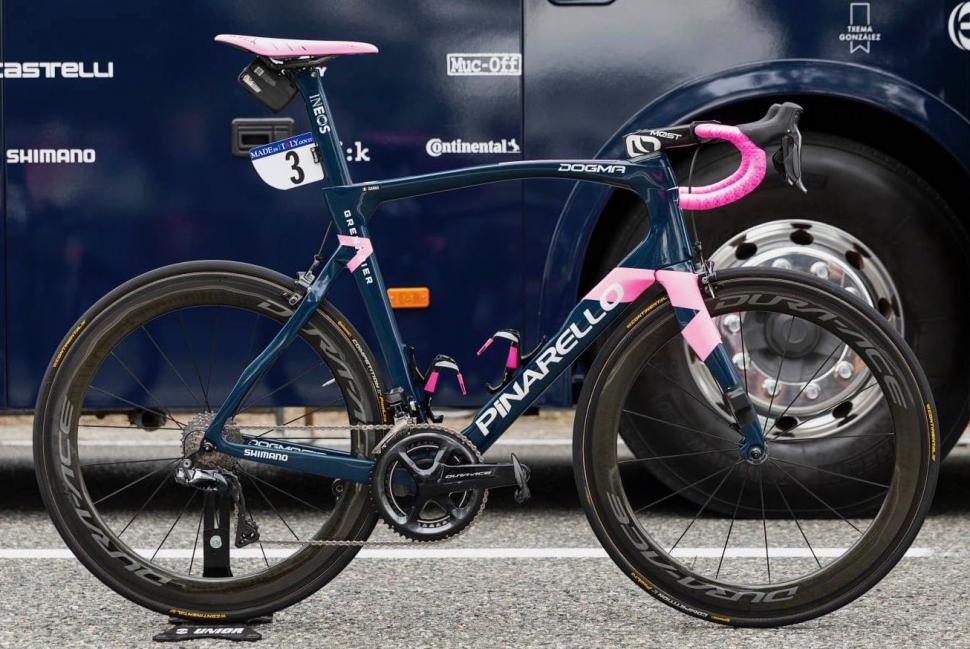 Ineos Grenadiers’ Filippo Ganna led the Giro d’Italia for three days after winning the opening time trial, so he was riding the road stages on a Pinarello Dogma F12 with pink details to match his maglia rosa leader’s jersey (he lost that race lead on stage four).

Pinarello launched the F12 version of the Dogma a couple of years ago in both disc brake and direct mount rim brake versions, with Ineos Grenadiers opting for rim brakes all the way.

Everyone in the bike world is pretty certain that a new Shimano Dura-Ace groupset will be released later this year, and Ineos Grenadiers (formerly Team Sky) has been on Dura-Ace since it was formed. It’ll be interesting to see whether the updated components encourage Ineos to make the shift to discs, or whether the team is set to stick with rim brakes for the foreseeable future. Ineos has experimented with discs in the past but shows no signs of wanting to swap over permanently.

Although the Dogma F12 doesn’t have the out-and-out aero looks of some road bikes, it’s certainly designed to reduce drag. The frame profiles are clearly different from those of the F10, for example

“Developing the Dogma F12 frame we started from a design concept that could pursue the Pinarello’s tradition as style icon but then every aesthetic element was analysed and modified until it guaranteed a significant aerodynamic or structural improvement,” Pinarello said at the launch.

“The result is a frame that from the aesthetic point of view shows a remarkable leap forward from previous generations but at the same time, it achieves the best aerodynamic efficiency values of any Dogma model to date.“

The Flat Back down tube profile – which is what it sounds like, with a squared-off trailing edge – was retained from the Dogma F10, for instance, but modified into a narrower width. A key aim of the Flat Back down tube is to reduce drag around the water bottle. With the F12, Pinarello reshaped the bottom bracket to allow the bottle cage to be mounted 5mm lower to improve airflow further.

Pinarello also looked closely at the point where the head tube, down tube and fork crown meet to improve airflow as much as possible. The fork crown is now integrated into the frame rather than adding to the frontal area.

The head tube now has a larger 1-1/2in upper bearing to provide the extra space necessary for internal cable routing – which offers an aero improvement – with just the cable for the front rim brake still running externally.

Pinarello says that the Dogma F12’s redesigned bottom bracket and beefed up chainstays are 10% stiffer than those of the F10. You can also fit a 28mm tyre, although the Continental Competition Pro Ltds fitted to Ganna’s Dura-Ace wheels are 25s.

The rim brake frame has a claimed unpainted weight of 820g (compared with 840g for the disc brake frame).

Ganna’s handlebar and stem are from Pinarello’s in-house brand while that pink saddle is an Arione from fellow Italian brand Fizik. With matching handlebar tape, Elite bottle cages, and frame accents, it’s one classy-looking setup.