Here are all the bikes that have crossed the line first in this year’s race, from Specialized, Trek, Giant, Canyon, Cervelo & more
by road.cc Tech

The 2022 Tour de France is over for another year, and here are the bikes that were ridden to victory on each stage. 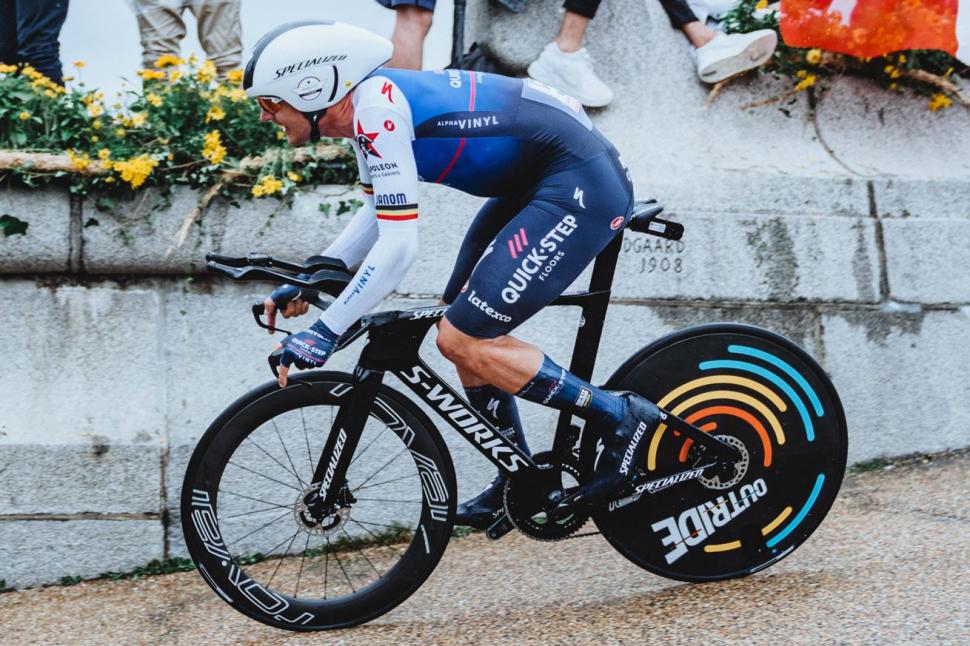 Lampaert rode a Specialized S-Works Shiv TT fitted with a Roval CLX 64 front wheel and a 321 Disc wheel at the back. He used Specialized’s S-Works Turbo Clincher tyres on the wet course.

Lampaert said, “Today my set-up made the difference. I just had to ride fast and trust my tyres.” 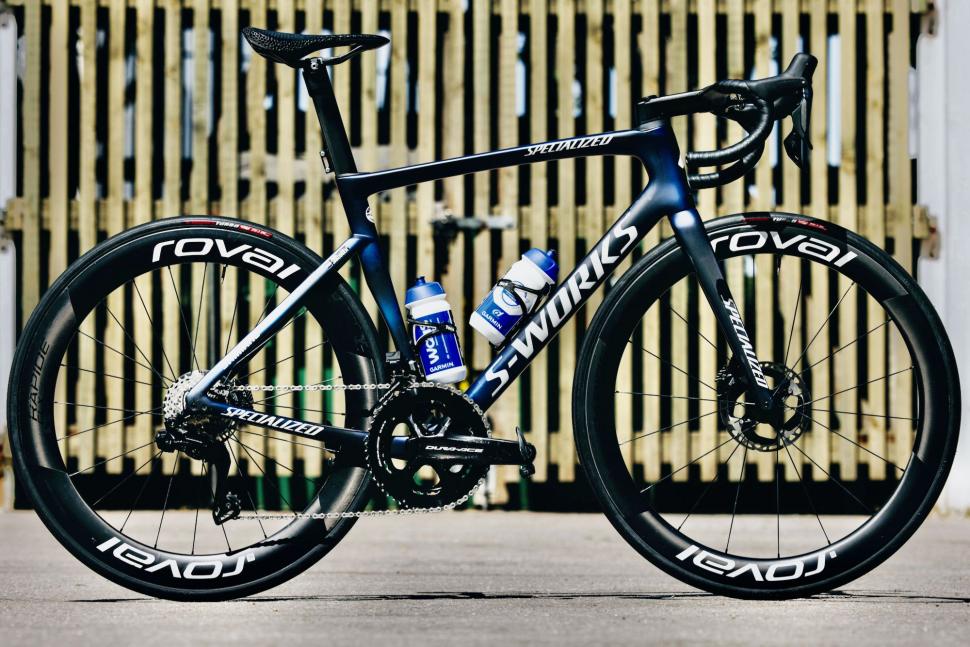 He was also using the new S-Works Evade 3 helmet which Specialized reckons is “the most aero road helmet in the peloton”. 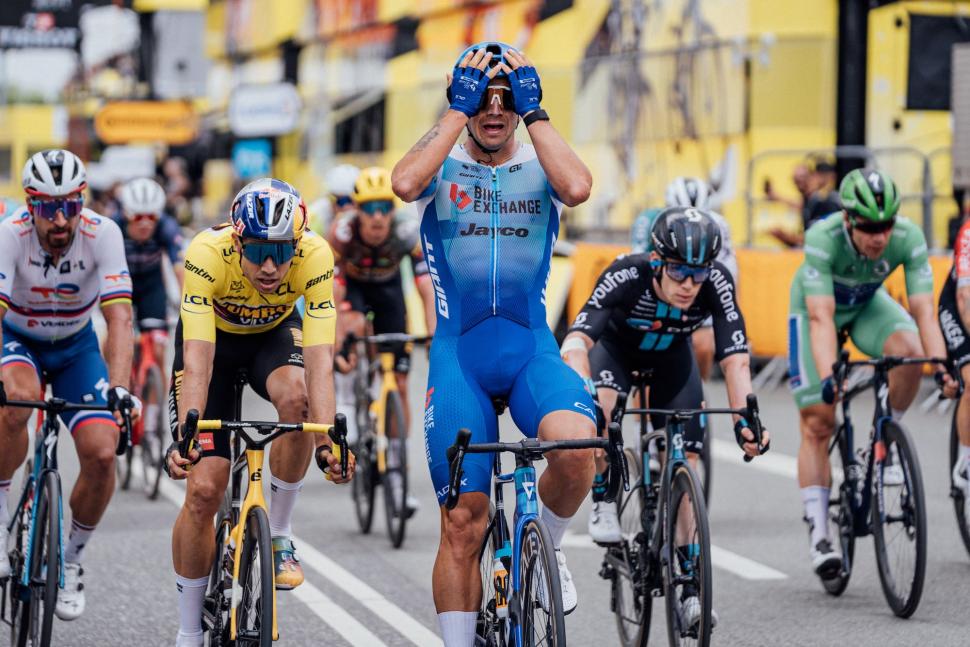 Dylan Groenewegen sprinted to victory on Stage 3 aboard Giant’s new Propel Advanced SL aero road bike. The updated model has yet to be released but it’s hardly a secret; Giant has shared pics on social media and its own website. 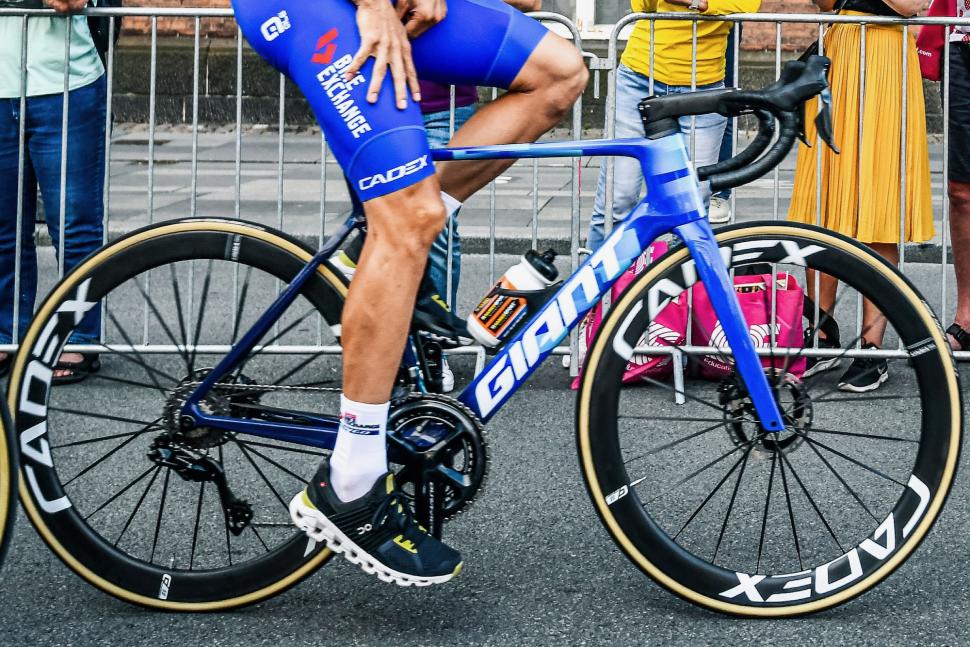 This side-on pic of another BikeExchange-Jayco rider’s bike suggests Giant has tried to shed weight on the new Propel, many of the tube profiles being much shallower than previously, and the seat tube has lost its cutout around the leading edge of the rear wheel – but we’ll just have to wait for the official release, whenever that is, for all the details.

With three stages complete, here’s how things are shaping up in terms of wins. 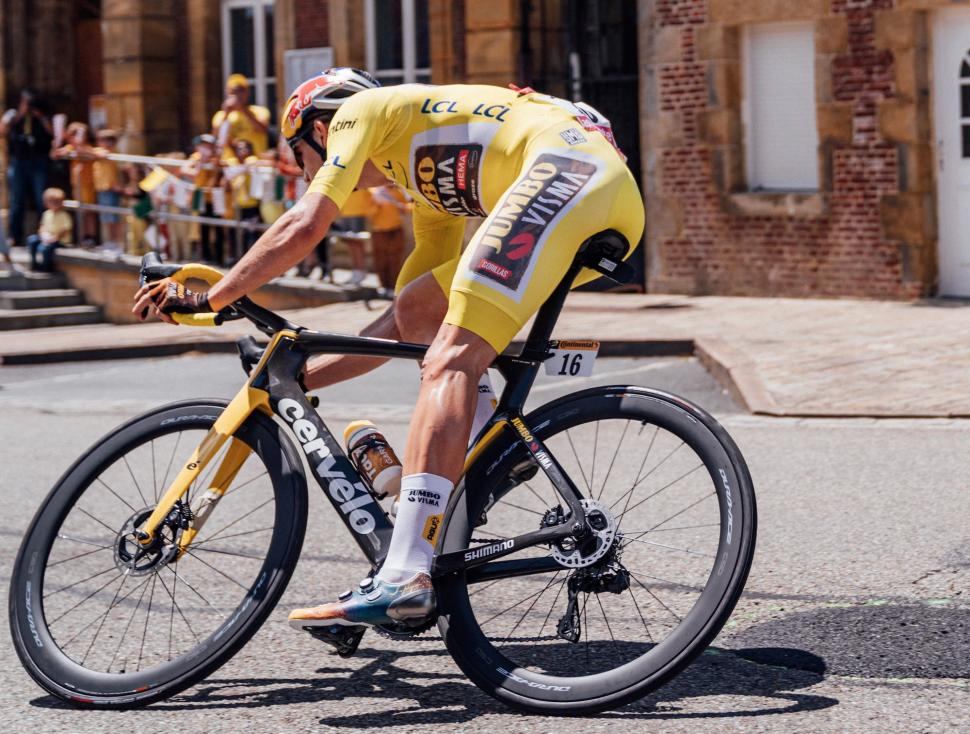 Wow! That’s a classy way to defend the yellow jersey. After finishing second on the first three stages, Wout van Aert went clear on his Cervelo S5 with 10km to go and held on for the win.

This version of the S5 has yet to be officially released. It looks like Cervelo has taken advantage of changes to UCI equipment rules and deepened the profile of many elements; the head tube, down tube, seat tube and seatpost are all deeper than before.

The fork legs could be a little deeper than previously too and the fork crown certainly extends further backwards. The idea is doubtless to improve aero efficiency.

Jumbo-Visma riders use Shimano Dura-Ace Di2 groupsets and wheels from Shimano too. 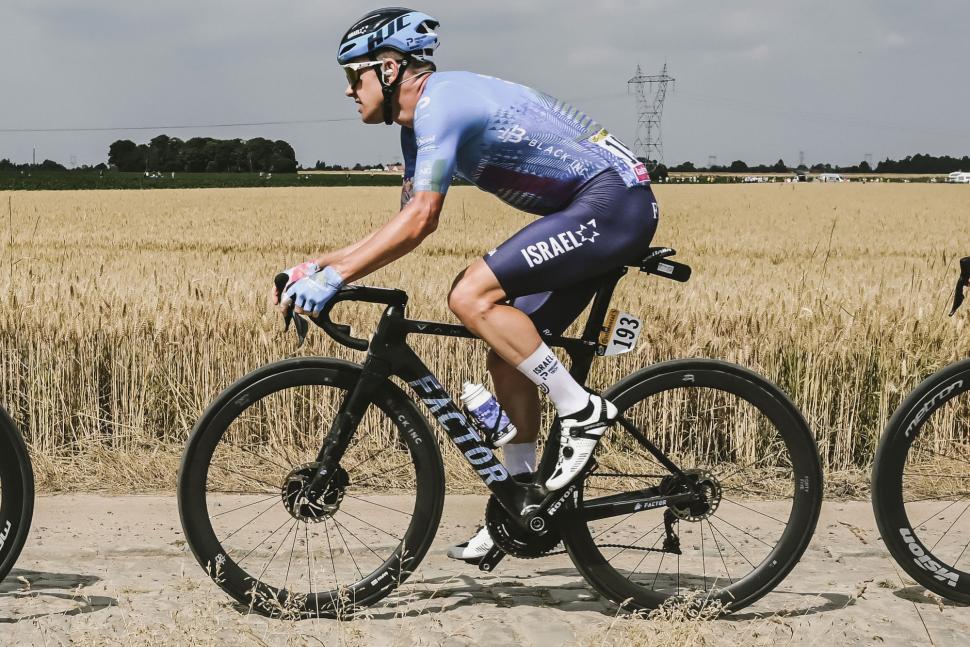 Simon Clarke won a stage that included 11 sectors of pavé (cobbles) on his Factor Ostro VAM.

The Ostro VAM is designed as the all-rounder in Factor’s range – lightweight (the frame is a claimed 830g in a 54cm size) with aero features, such as deeply profiled tubes and an integrated fork crown.

Check out our review of the Factor Ostro VAM frameset 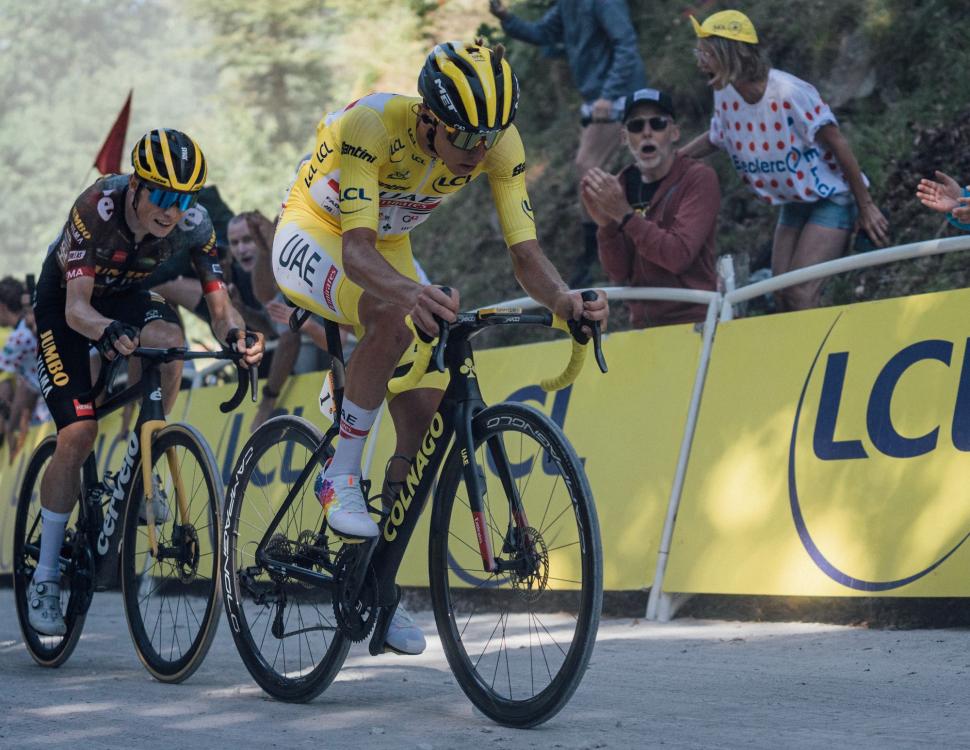 Two-time Tour de France winner Tadej Pogacar has been riding the Tour de France on a Colnago prototype frame – so far just called the Prototipo, although that’ll be changed over time – rather than the V3Rs.

The Prototipo comes with some aero tube shapes, fully internal cable routing, a slightly sunken bottle cage mount area on the down tube, and a slimmed-down head tube.

Colnago says that this bike will need to be “as versatile as possible, suited to the needs of sprinters, rouleurs and climbers alike, and to be at the top in the different phases of a race.”

UAE Team Emirates use Campagnolo Super Record EPS groupsets and the wheels are from Campag too. 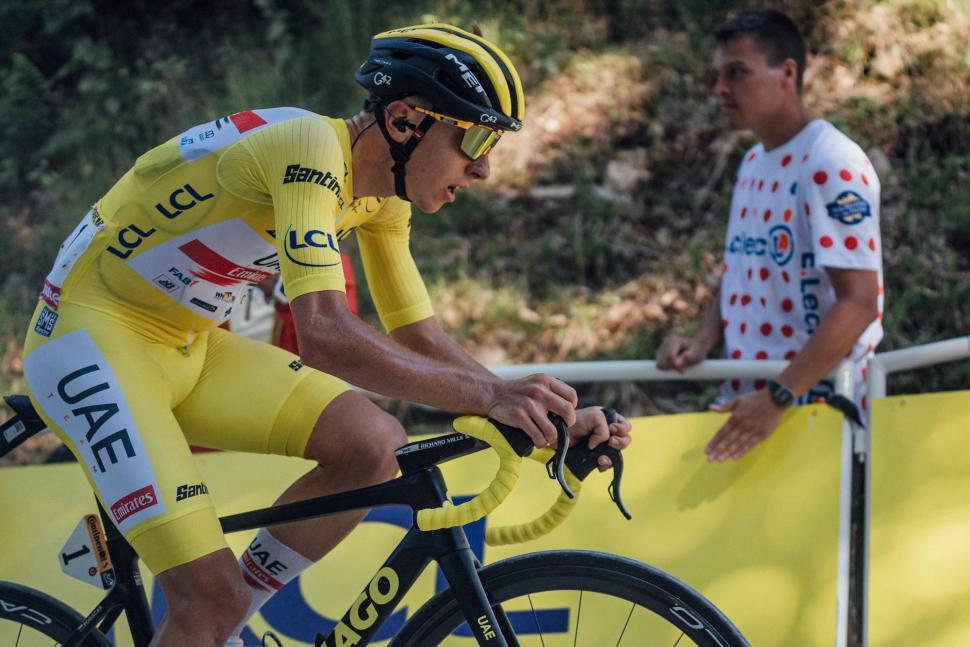 Pogacar made it two stage wins in two days on the Colnago Prototipo, easing ahead of the other climbers on La Super Planche des Belle Filles. 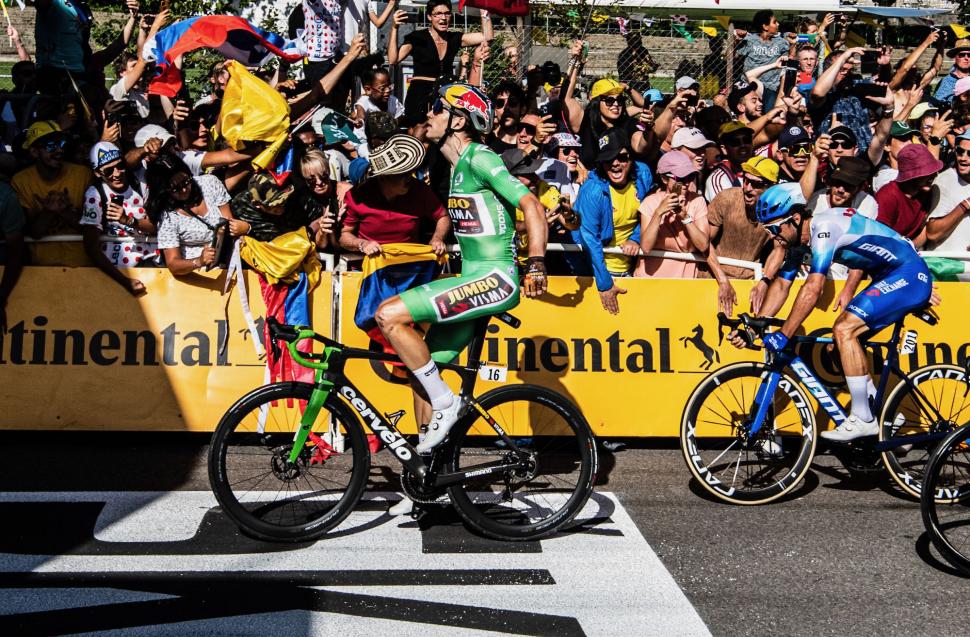 Wout van Aert got his second stage victory of the 2022 Tour de France by out-sprinting the climbers in Lausanne.

Although Van Aert’s bike had a green fork to mark his lead in the points classification, it’s essentially the same Cervelo S5 that he rode to win Stage 4.

With nine stages done and dusted, here’s how things are shaping up in terms of wins. 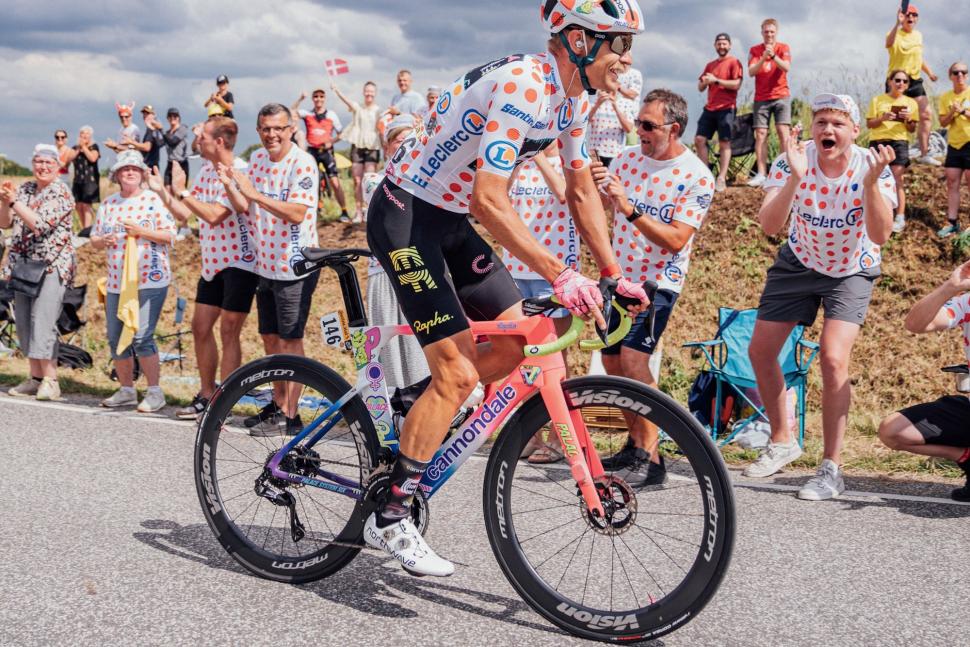 Despite the uphill finish, Magnus Cort out-sprinted Nick Schultz to the line at Megève Altiport on an aero Cannondale SystemSix rather than the lighter SuperSix Evo.

The bike, pictured here earlier in the race when Cort was leading the King of the Mountains classification, has an eye-catching Cannondale + Palace Skateboards finish.

Are these Cannondale & Palace EF Education team bikes the maddest in the peloton?

Will you be wearing the Rapha + Palace EF Crocs? Check out the range

Cervelo unveiled the fourth iteration of its R5 road bike last year. The new frame is said to be 16% lighter than previously with the bike as a whole slightly more aerodynamically efficient and more comfortable, particularly at the front end, Cervelo admitting that the previous model could feel harsh over longer distances.

Vingegaard's bike is built up with a Shimano Dura-Ace Di2 groupset and Shimano wheels. We think he was using tubular tyres, the team having preferred tubs to tubeless on most stages up until now.

Tom Pidcock became the first Ineos Grenadiers rider to win a stage at this year’s Tour de France and, at the age of 22, the youngest ever to win on Alpe d’Huez.

Ineos use the Pinarello Dogma F on every road stage, The bikes are equipped with Shimano Dura-Ace Di2 groupsets.

Ineos riders have used non-sponsor wheels on mountainous stages in previous years, but Pidcock kept the faith with Shimano Dura-Ace. 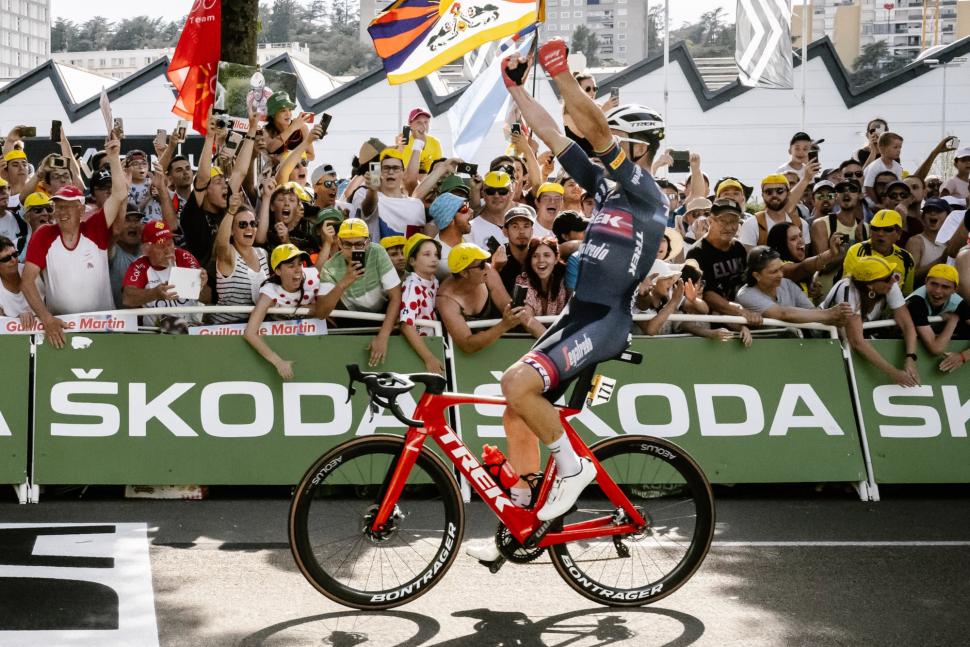 This is the model that features Trek’s new IsoFlow technology with a large hole in the seat tube that’s said to provide aerodynamic improvements, comfort, and a significantly lighter overall weight. 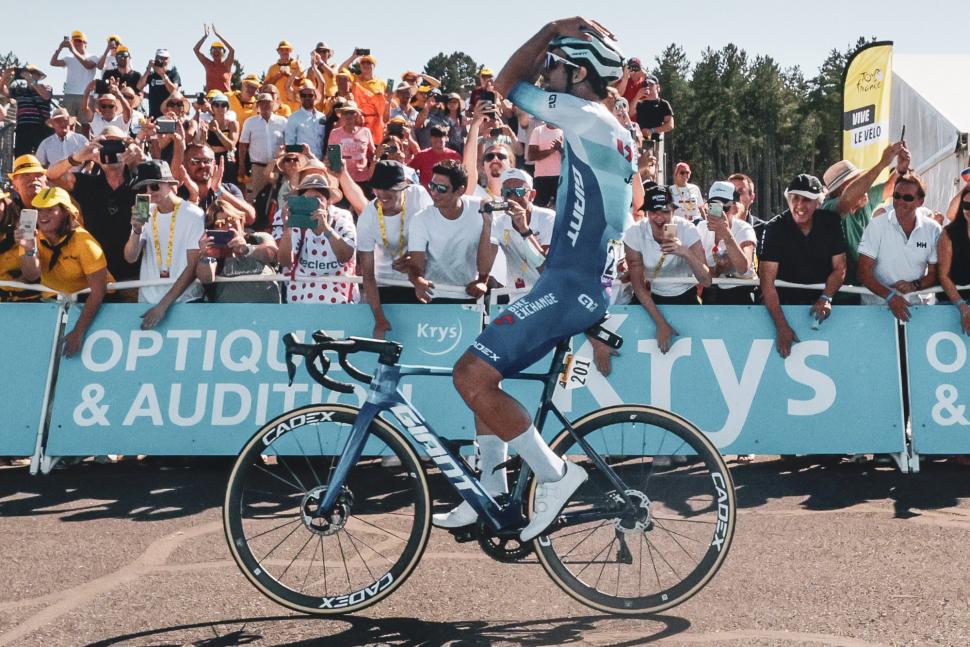 You've got your stage win @JasperPhilipsen! So, so deserved!

Jasper Philipsen got his first Tour de France stage win on a Canyon Aeroad CFR, the aero road bike that sits alongside the lightweight Ultimate at the top of the range.

With 15 of the 22 stages complete, here are the standings of the various brands in terms of stage wins. Israel-Premier Tech might have just saved their World Tour status with the performance they delivered on Stage 16. Houle held off remnants of the breakaway up the Mur de Muguere to make it two stage wins for the Factor Ostro VAM.

Once again we saw a 'climbers' day won on an aero bike and Houle opted for aero wheels as well (Black Inc. 45s) rather than a pure climbing wheelset. You'll also notice that Houle's bike is fitted with a CeramicSpeed OSPW system.

Stage 17 was a battle for the ages. Pogacar won the day but Vingegaard is one step closer to winning the war. This is Pogacar's third stage victory at this year's Tour and once again he chose to ride the Colnago Prototipo fitted with 12-speed Campagnolo Super Record EPS groupset and Campagnolo Bora Ultra WTO 33mm deep wheels.

Vingegaard has had to wait a while for his first stage win in the yellow jersey but when he finally managed it, it was in some style and a margin of over a minute.

Vingegaard was once again on his fourth-generation Cervelo R5 fitted with Shimano Dura-Ace groupset, Dura-Ace tubular C36 wheels and one-piece Vision Metron 6D integrated bar/stem combo which is a popular choice in the peloton. 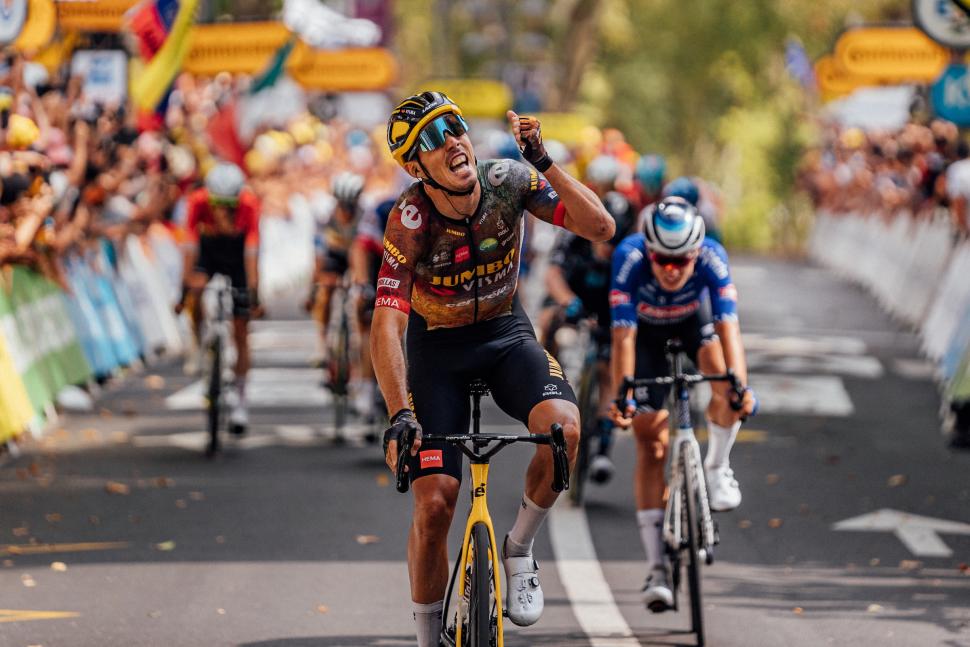 On a day designed for the sprinters, Laporte jumped off the front with a kilometre to go and held off the bunch. As the stage was fairly flat, all the Jumbo Visma riders opted for the Cervelo S5 aero bike. The first French stage winner of the race is a sponsor's dream, not only using the Shimano Dura-Ace wheels and groupset, but also a set of RC902 shoes. 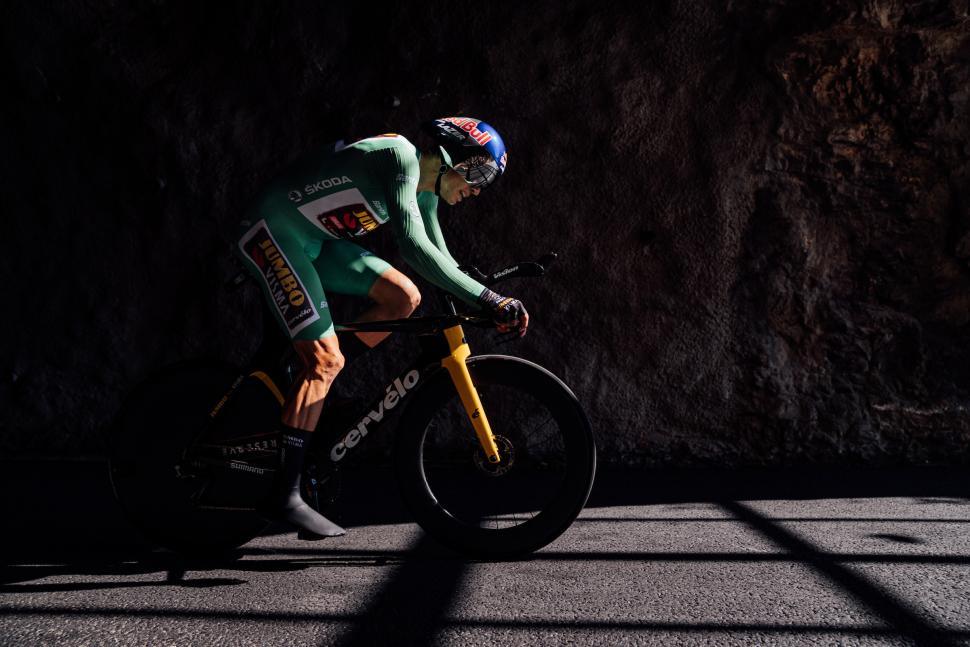 The second time-trial stage was longer and hillier than the first so who else would win it than Wout Van Aert, the on-form Belgian powerhouse. Cervelo supplies Jumbo Visma with their P5 TT bike and Wout has his kitted out with Vision aero bars fitted to the Cervelo base bar, Shimano Dura-Ace pedals and a special Fizik Antares saddle with grip tape to stop him sliding forwards.

Jumbo Visma is one of very few teams to have the new 12-speed Dura-Ace on their time trial bikes as well as their road bikes. However, Van Aert used a Reserve 77/Disc wheelset rather than wheels from Shimano.

With a dominant sprint on the Champs Elysees, Philipsen bagged a second win for himself and Canyon.

Philipsen opted for the Aeroad CFR with Shimano Dura-Ace groupset, pedals and C60 wheels which were clad in Vittoria Corsa Speed tubeless tyres. Interestingly, Philipsen also had a thru-axle with a lever; we normally see them removed for aerodynamics.

With the race over for another year, let's take a look at the scores. Here are the standings of the various brands in terms of stage wins.

Despite sponsoring only one team, Cervelo has absolutely knocked it out of the park courtesy of the Jumbo-Visma riders, mopping up not only the most stage wins with their Cervelo R5, S5 and P5 bikes but also the yellow, polka dot and green jerseys.

Specialized and Canyon will be a little disappointed with the lack of stage wins compared with previous years but Factor can be pleased to score more stage wins than much larger brands.

Once again, Shimano Dura-Ace is the most successful groupset. It's fitted to far more bikes in the pro peloton than any other so this was always expected. Campagnolo outscored Sram for another year in no small part thanks to Tadej Pogacar.

As is often the case, the winners of the respective jerseys had bikes custom painted in their honour. As three of the jerseys went to Jumbo Visma, we don't envy whoever had to stay up all night painting.

If you had the choice of any of the stage-winning bikes, which one would you choose? Let us know in the comments section below...