While some bike brands use Paris-Roubaix as a shop window for endurance bikes chock-full of features designed to damp vibration, Dylan van Baarle of Ineos Grenadiers won the race on Sunday aboard a Pinarello Dogma F, the model the team uses for all road races regardless of the terrain. 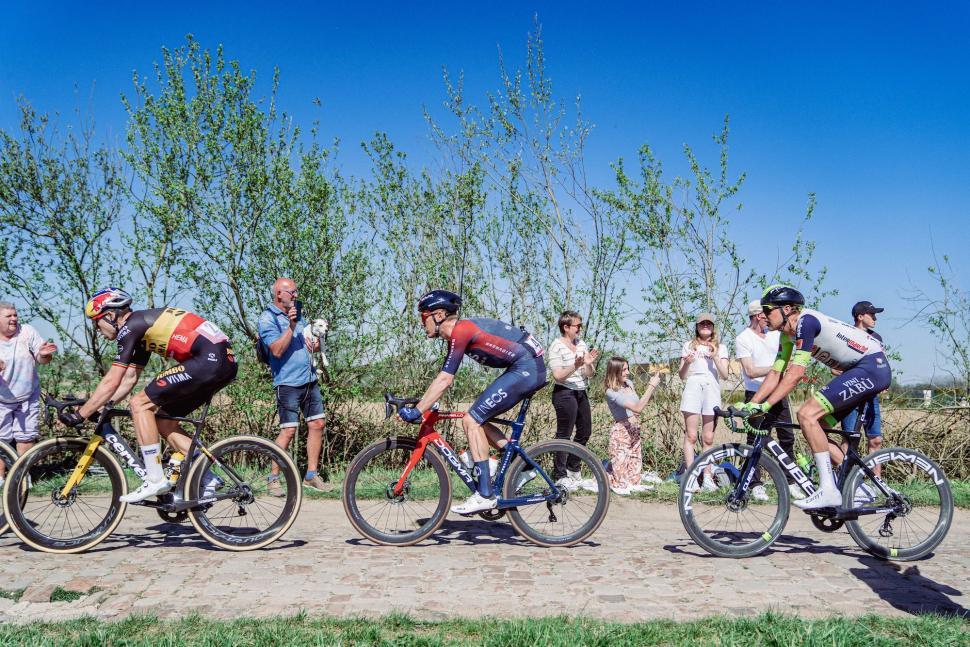 Pinarello introduced the Dogma F as its top-level road bike last summer, taking over from the Dogma F12.

“This is a bike that is perfect for every type of rider and every terrain because real-world riders aren’t specialised,” says Pinarello. “You need a bike that can climb and descend with equal flair, attack every corner and make every watt count on the finishing straight. The Dogma F is designed to do just that, no matter the circumstances.”

Pinarello said that when designing the Dogma F its priority was on handling rather than shedding weight. Even so, the complete Dogma F Disc frame kit is 11% lighter than the F12. Pinarello puts that down to innovation and new production methods such as 3D-printed titanium componentry. 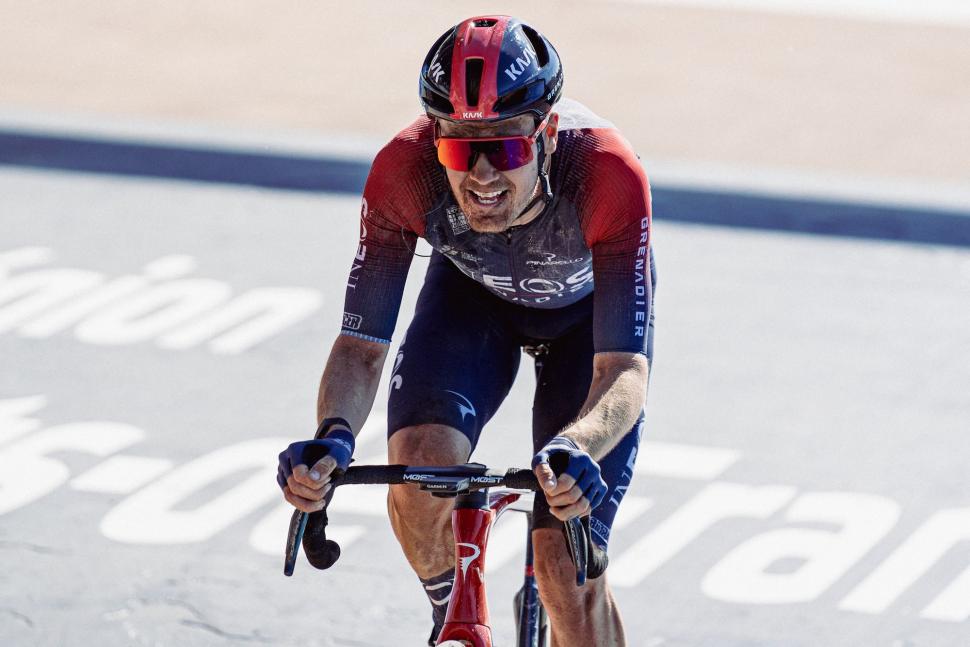 Particular attention was paid to the seatpost, headset, fork, and the Talon cockpit, resulting in a saving of 265g.

Pinarello also claims that the Dogma F is 12% stiffer than the F12 around the bottom bracket and that improved aerodynamics provide significant savings.

The updated Onda fork is said to be 16% lighter than previously, mainly due to new carbon fibre materials used in its construction. The profile of the disc brake fork – Ineos Grenadiers are using disc brakes this year – has been changed to improve interaction with the front wheel.

Pinarello claims that there’s virtually no drag until the air has travelled halfway along the frame and that in crosswinds the blades of the Onda fork act as sails to help move the bike forward.

Pinarello says that the Dogma F benefits from a narrow seat tube (just 20mm wide at the top junction) and seatpost, taking advantage of UCI rules for reduced minimum tube width, and that new down tube cross-sections improve aerodynamics.

Similarly, the seatstays are built to new cross-sections that are intended to improve airflow with the rear wheel, and they have been lowered – they meet the seat tube lower than on the Dogma F12 – to reduce the frontal area. 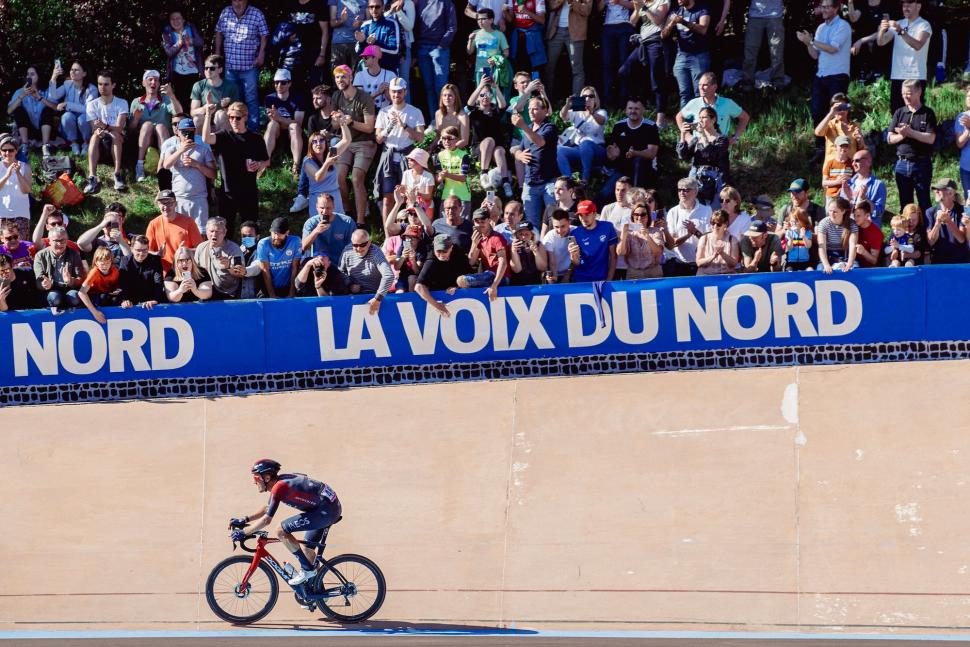 Pinarello claims that these changes make the Dogma F “4.8% more aerodynamic in the disc version compared to the Dogma F12”, saving the equivalent of 1.3 watts at 40 km/h (25mph) and 2.6 watts at 50 km/h (31mph). With a course as flat and fast as Paris-Roubaix, aero advantages can make a big difference. 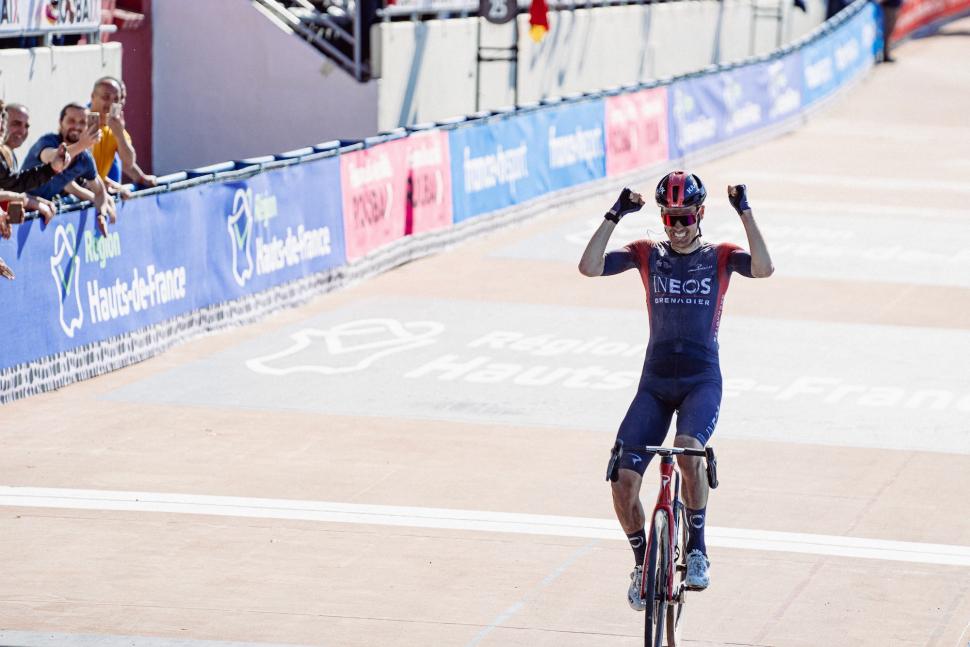 The wheels are Shimano’s Dura-Ace C50s. These are designed as all-rounders with 50mm-deep carbon rims and claimed weights of 674g (front) and 787g (rear).

They’re run with tubeless Continental Grand Prix 5000 tyres. The maximum tyre width the Pinarello Dogma F will take is 28mm. That applies to both the disc brake and the rim brake versions. 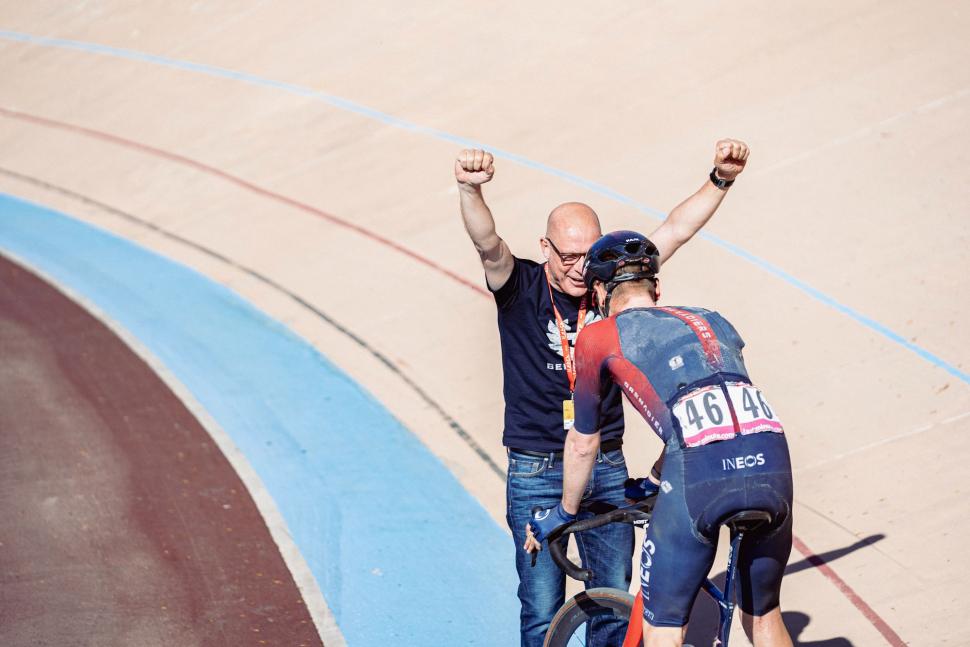 The combined handlebar and stem is the Talon Ultra from Pinarello’s in-house Most brand. It is the same shape as the previous model but it’s said to be 13% lighter and just as stiff thanks to a new carbon layup. It looks like Van Baarle has gone for a double layer of handlebar tape to help deal with the cobbles.

Fizik provides the saddle that sits on top of Pinarello’s inline seatpost (although seatposts with layback are available, the clamp on Van Baarle’s bike sits above the centre of the post) and those look like standard Elite Leggero carbon bottle cages. 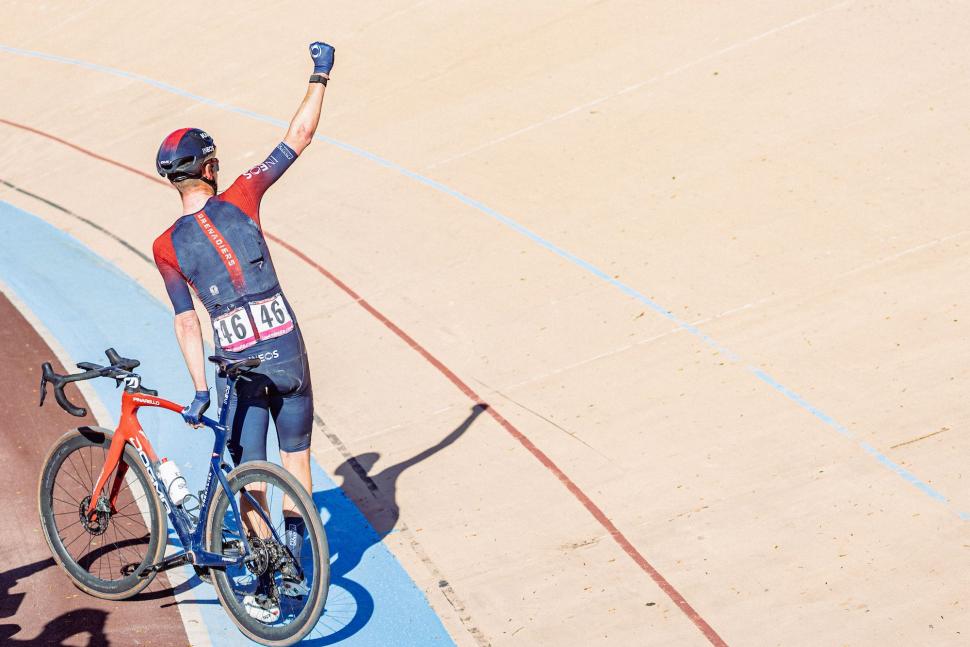 Although the bike Dylan van Baarle started Paris-Roubaix on was equipped with a race number, there was no number on the spare bike he used to finish the race. He cleverly swapped bikes just before the third group joined the second, meaning that he didn't have to do any chasing back on.