Subscribe
Back to Features
feature
Sponsored
Buying
What type of cycling jacket should I buy? | Winter commuting essentials

Riding to work through the winter can be chilly and wet without the right jacket. Here's how to get the best one for your urban ride
by Liam Cahill

This article includes paid promotion on behalf of Altura

Winter’s closing in, and if you’re going to commute to work then you’ll be needing a good jacket to see you through the winter months. But what should you look out for?

We’re going to run you through the basics which included weatherproofing, fit and visibility to help you get a good idea of what to look for in your next commuting jacket. And to help us out we’ve got three jackets here from the Altura urban range to help us. 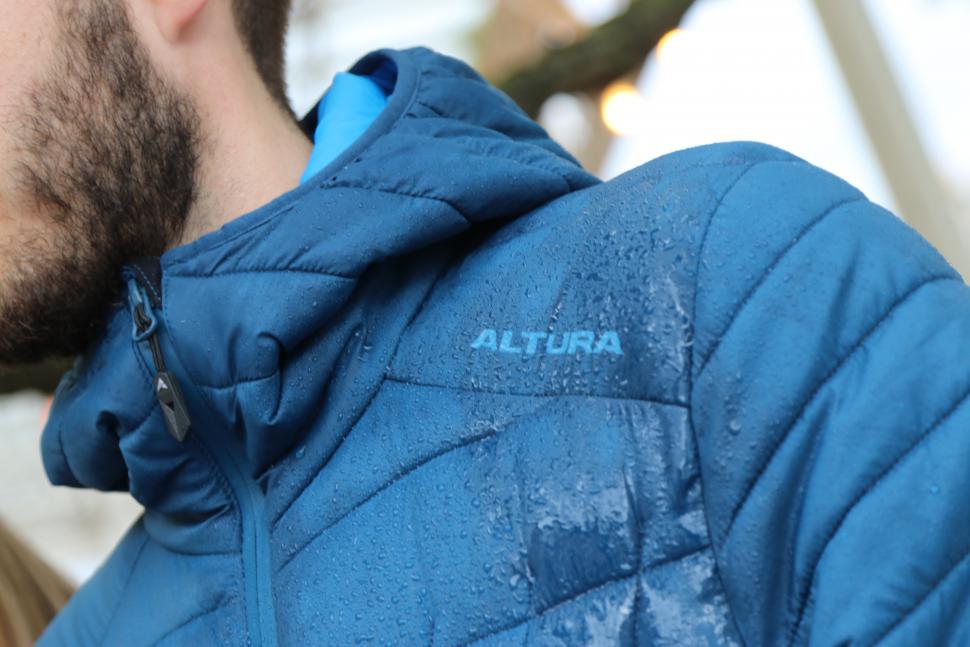 First up, let’s look at what jackets are made of. They’re not all the same, and what will be right for you is going to depend a lot on what you’re going to do with it.

There are three main types of jacket that you’ll see when you’re shopping for a new one. You can get hardshell and softshell jackets, and also insulated jackets, which have become a lot more popular over the last few years.

A hardshell is probably what you’d say is the most traditional cycling jacket. It’ll be made of a fabric that’s designed to be fully waterproof. Often, as with Altura's Electron jacket, that’s a membrane fabric that stops rain getting in, but also allows water vapour to escape so you don’t get too sweaty if you’re riding hard.

You’ll see a rating on jackets like this, for both water resistance and breathability. In the case of the Electron, it's 10k/10k, but what does that actually mean?

The two numbers in this example are the same, but they mean very different things. The water resistance is a thing called hydrostatic head. Basically, it’s a measure of how tall a column of water would need to be before it started seeping through the fabric. Here it’s 10k, or 10,000 millimetres. It’s a bit hard to directly apply that number to riding in the rain, but higher is better. 10k means fully waterproof, basically. Jackets like this will usually have taped seams, too, because the stitching at seams is a weak point where water can get through.

And the breathability rating? Well, membrane fabrics are designed to allow water vapour to pass through. The amount that can get through the membrane will depend on how it’s made. The figure quoted here is how many grams of water vapour can pass through a square metre of the membrane in 24 hours. Again, you don’t really need to know that, only that higher is better.

There’s another way of measuring breathability that you might see, which is the Thermal Evaporative Resistance or RET coefficient. For that one, lower is better because it means the fabric is less resistant to vapour passing through. Anything under 6 is very breathable.

Jackets also breathe through vents, usually on the back. You’ll usually get fabric that overlaps so that no water can get in by mistake. Some jackets have vents under the arms too.

Moving on to softshell jackets, it’s not going to be a huge surprise that these are made from a softer material. Jackets such as the Zephyr are often designed to be a bit more multi-use than hardshell jackets. The softshell fabric tends to be more comfortable against the skin than a hardshell, so they’re better for wearing as an everyday jacket. You might wear this in the pub, but you’d hang up a hardshell jacket at the door. If you want something that you can wear more generally than just on the commute, then more muted colours will work better for that.

Softshells vary a lot in how waterproof and breathable they are. The Zephyr is rated at 5k for both waterproofing and breathability, so it’s the kind of jacket that’s going to shrug off the showers on the way to work okay, but it’s not going to be as good in heavy rain as a hardshell. It’s still got taped seams, so it’s still going to keep you dry for a decent length of time.

Moving on to insulated jackets, again the clue’s in the name. Usually, an insulated jacket uses two layers of thin fabric with some kind of insulation in between. Back in the day that would have been down, but for cycling where the jacket might get wet it’s better to go for synthetic insulation, as it works better when it gets wet. The Twister jacket uses insulation that’s made from recycled bottles. The outer fabric is normally some sort of ripstop nylon, which is light and strong. And it’ll be sewn into baffles like you see here, where the inner and outer are sewn together.

The baffles keep everything where it should be and you can see that because this is a jacket designed for riding in, the baffles have been designed to help you out, so they’re smaller on the arms here for example where you need more flexibility.

Ripstop nylon isn’t particularly waterproof, and because you’re stitching right through the jacket that affects its ability to resist the rain too. The Twister jacket has a water-repellent coating on the outside of the fabric to help water bead and run off. But insulated jackets are better on cold, dry days. Of course, you can layer up with an insulated jacket and a hardshell if it’s both cold and wet. 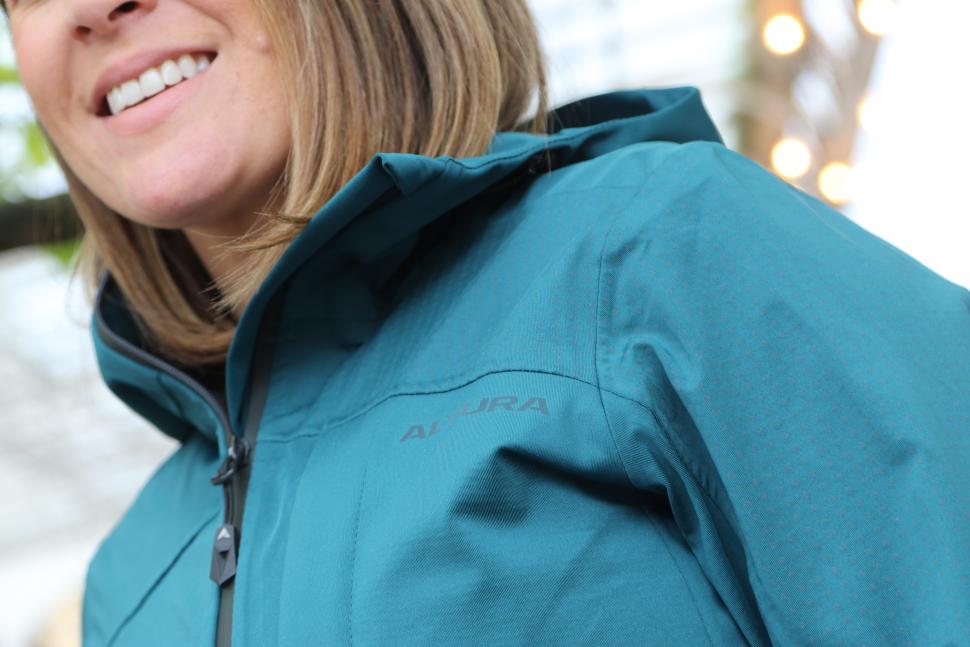 Let’s move on to the cut. A jacket for commuting needs to be something that works on the bike without looking weird if you’re just walking around town in it. There are some basic differences between a jacket that’s specifically designed for cycling, and one that’s not. There are a few things to look out for.

For the basic cut, there are two main things about being on the bike that are different to walking about. Firstly, you’re bent over forwards. The extent you’ll be bent over depends on the bike you’re riding, so for a commuting bike, it’ll be less than a racing bike. Secondly, you have your arms out in front of you. And both of those things affect how the jacket needs to be cut.

If we look at how leaning forward affects the cut, it’s fairly obvious. The back rides up, so it needs to be a bit lower there to cover up your lower back. The men’s cut of these Altura jackets has a slightly lowered back for that reason. You can see that the women’s cut is more of a mid-length, which is great for coverage and there’s a two-way zip, so you can open the bottom of the jacket up for riding. Or you can just sit on the bottom of the jacket if you prefer.

Having your arms out in front of you means the sleeves need to be longer, and because you move your shoulders forward you shorten your chest span and you’re wider across the back. If you cycle in a non-cycling jacket you’ll usually find the arms are too short, and it’s baggy at the front here because there’s too much fabric. All of these jackets are cut to take that into consideration: the sleeve seams are more fitted at the front, and the sleeves are a bit longer. There’s a bit more fabric at the back, too. Again, with a commuting jacket, you don’t really want to go too far or it’ll start to look odd down the pub.

It’s not just the pub, either. Jackets that are a less aggressive cut are also really good for cross-discipline riding because they work well on a mountain bike or a gravel bike, both of which have a less aggressive position than a road bike. So the Twister jacket for example might do you for your commute and also some bikepacking adventures if you’re into that kind of thing. 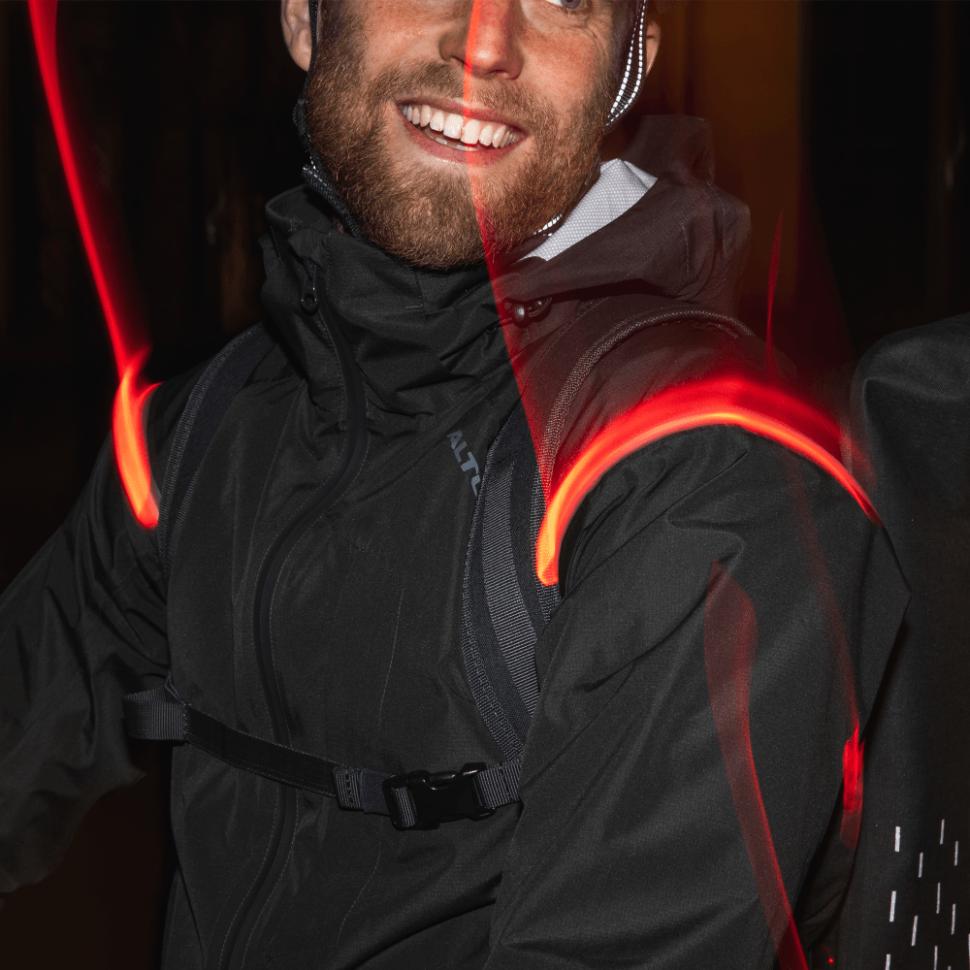 If you’ve worked out what kind of jacket you’re looking for, then it’s worth thinking about what kind of features you can get to improve your day-to-day commuting. There are plenty of things to consider.

In the daytime many people opt for high viz, and most brands offer hi-viz jackets in their range. These more muted colours are much better for a multi-purpose jacket that you want to wear off the bike too. If you want to go bright but you also want something you can wear to the shops, then something like a fluorescent gilet is easy to sling over the top when you’re on the bike.

The Electron jacket turns things up a notch because it’s got integrated lighting too: there’s a battery in the pocket here that drives these light strips on the rear and across the shoulders. They’re designed so that you can use them with a backpack too. That’s great for a bit of extra visibility. 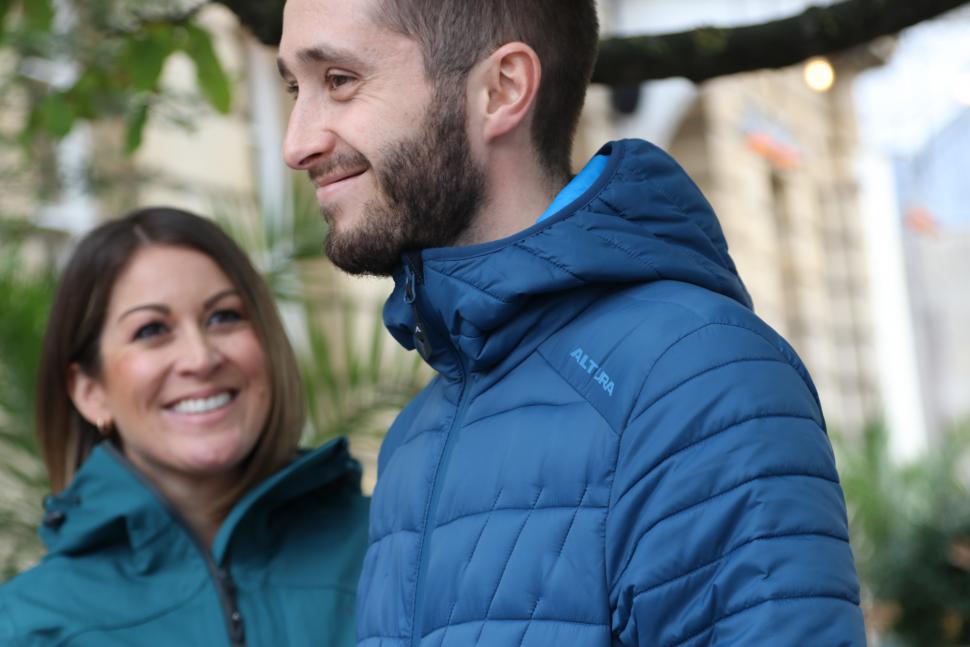 You might want a hood, too. Not necessarily for riding, because most hoods don’t play too well with a helmet, but just for general use off the bike. Some jackets like the Electron have a removable hood, so you can just pop it on when you need it. Even if a hood’s not removable it generally doesn’t get in the way when you’re riding, although it might flap about if you’re riding fast.

You’ll need pockets of course, for carrying stuff. Jackets for fast riding tend to have the pockets on the back like a cycling jersey, but for commuting it’s better to have everything up front. A chest pocket is really useful for your phone, and make sure the pockets are zipped so that you don’t lose your stuff on the way to work.

In the cold the wind can get in, so look for features designed to prevent that. A baffle behind the zip really helps, as do adjustable cuffs which can be tightened to stop the wind blowing up your arms. The Electron jacket also has a fleece-backed front which is great once it starts to get chilly.

Is there anything else that you look for in a commuter jacket? Let us know in the comments below.