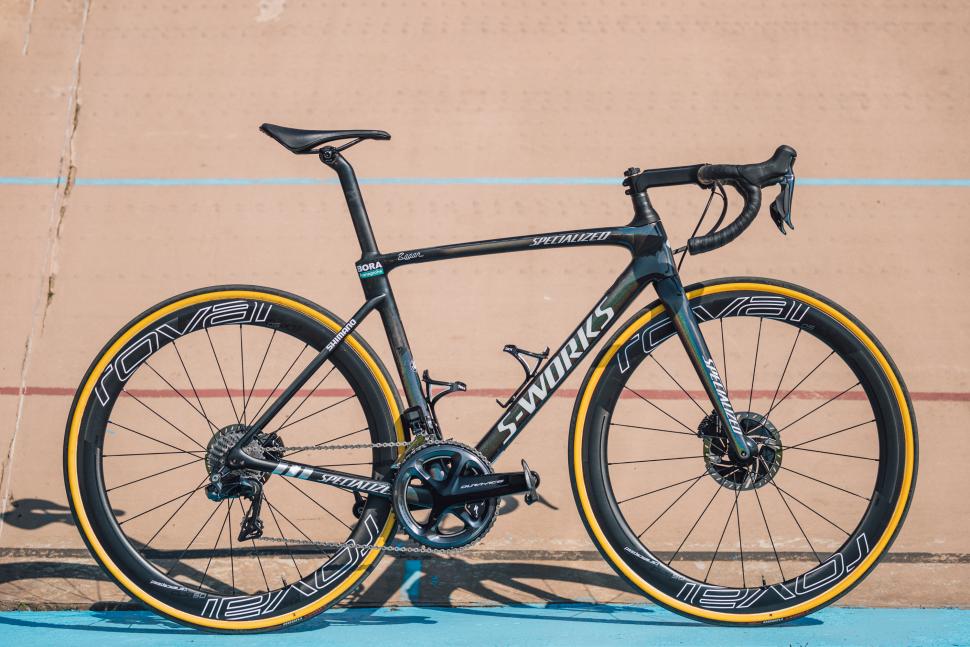 Peter Sagan’s Specialized S-Works Roubaix - But will he ride mechanical?

Paris-Roubaix is, many will say, the best race of the year for a bike tech nerd. For years it has been the place for big tyres, special bikes, old-skool wheels and generally strange setup choices. Peter Sagan will take to the start line on the Specialized S-Works Roubaix, but his exact setup is seemingly yet to be decided. Here are the tech details of his two options.

The return of mechanical?

Hands up who can remember the last time a big men’s race was won on mechanical shifting? I can’t. The big teams in the men’s peloton are all on electronic shifting these days, so it is nice to see mechanical shifting make an appearance every now and again. 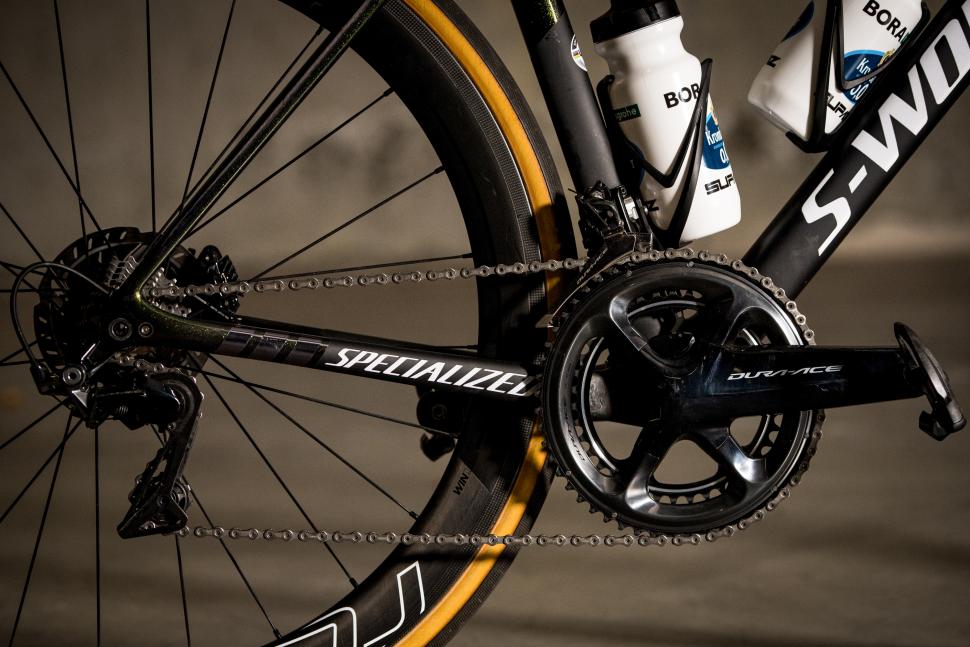 CyclingTips noticed that Sagan was out doing the standard pre-Roubaix citing ride and it was here that they spotted him on the mechanical Shimano Dura-Ace R9120 groupset. There are a few reasons why the three-time World Champion might be looking to use mechanical shifting on Sunday and the main one is simply that cobblestones are really bumpy. 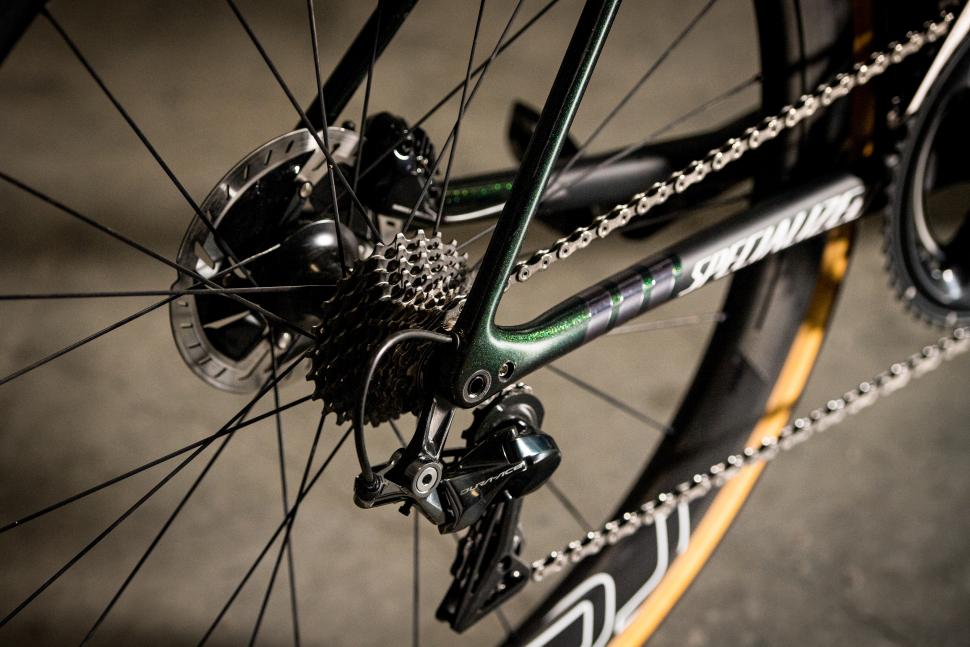 The shift paddles on the R9120 shifters are larger, a little more pronounced and there is less chance of an accidental shift if your finger is hovering on the paddle. We’ve seen Fabian Cancellara make the same switch to mechanical in the earlier days of Di2 for just this reason.

That said, one benefit to electronic shifting systems is the ability to mount satellite shift switches on various parts of the handlebar. Should you be a fan of riding the cobbles with your hands on the tops, a set of shifters can be glued to where the bar tape stops next to the stem and that should make shifting while riding the cobbles a bit easier.

One race too far for clinchers? 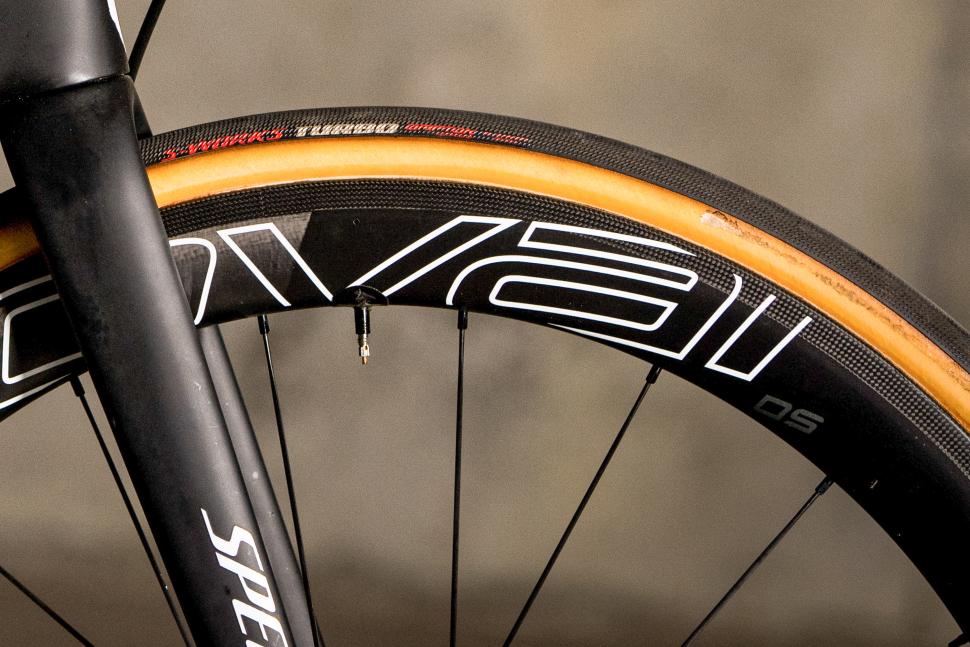 Despite some wacky frame designs, the best way to make a bike more comfortable for the cobbles of the Hell of the North has long been to install wider tyres and run them at lower pressures.

Roval, the brand which provides wheels to Sagan’s Bora-Hansgrohe team, released its latest wheelsets in tube-type clincher versions only. There was no provision for tubeless and certainly no tubular option.

While this is evidently fine for most races - Asgreen won Flanders and Allaphilippe took the Worlds on clinchers - Paris-Roubaix is a different beast entirely.

While we’ve seen a huge number of tubeless tyres in the recon ride photos, Sagan seems to be heading back to his trusty Roval CLX 50 tubular disc wheels.

On these is mounted what looks to be the Specialized Hell of the North Turbo Cotton tubular tyres. These tyres were designed specifically for this race and feature a tread that extends 4mm further down the sidewall on each side. There is also extra puncture protection hiding under the Gripton compound. Sagan has raced on the 30mm size in previous editions so we’d expect him to be on that size again this year. 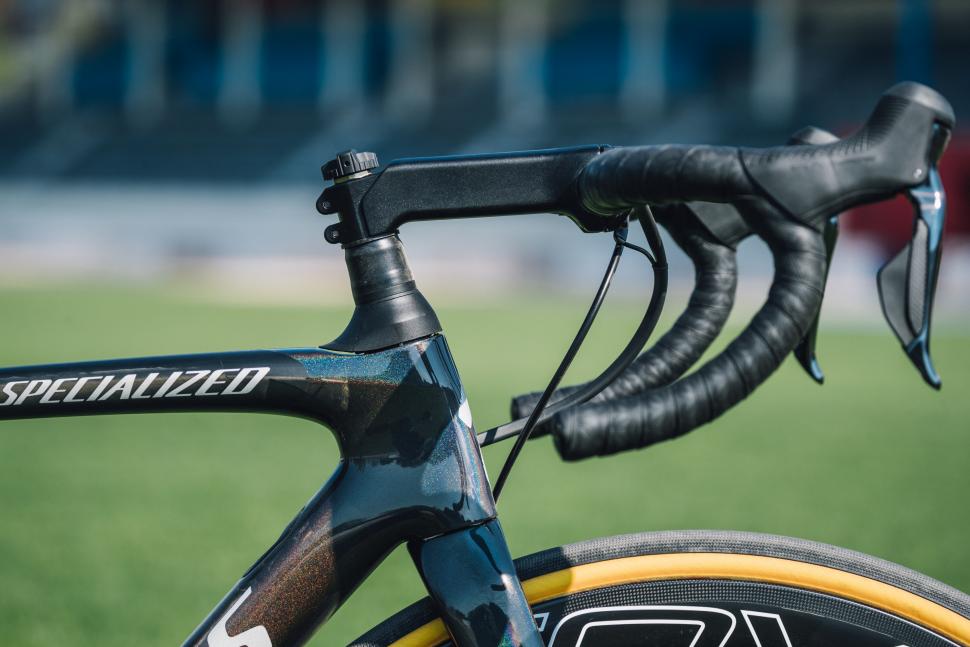 The Specialized Roubaix features the Future Shock 2.0 which is a hydraulic damper that adds 20mm of travel to the front end. The idea is that this helps to isolate the rider from the roughness of the cobbles, but there is also a dial located on the top cap, allowing the rider to tune the damping that the system provides. Sticking with the front end of the bike, Sagan selects a carbon Pro Vibe handlebar with a round top section. The stem looks to be the model from the Tarmac SL7, so it is presumably one that Sagan likes. What we know for certain is that it’s a long stem. 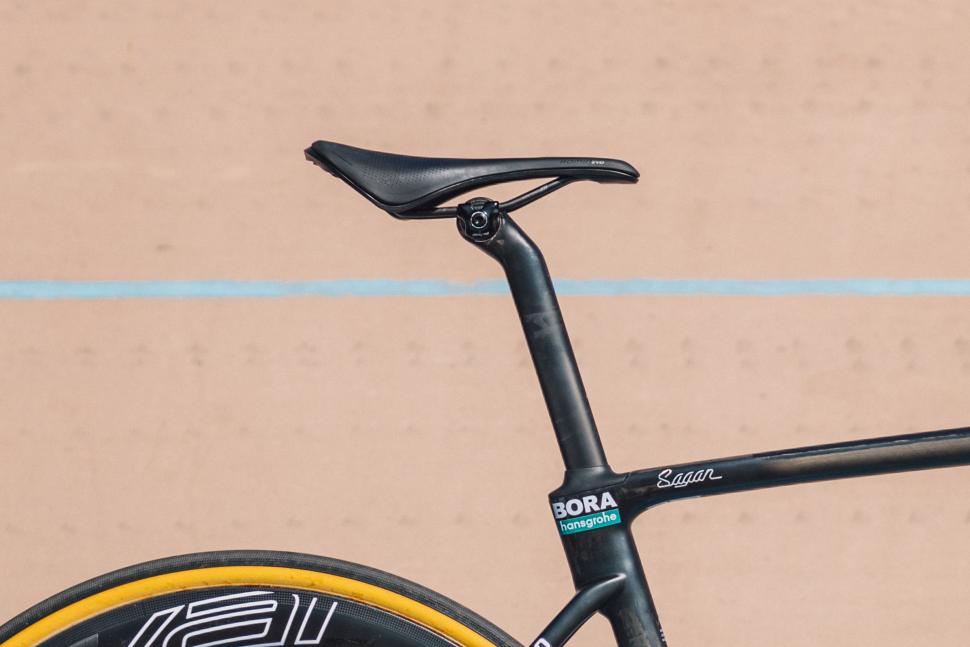 The saddle is a Specialized Romin Evo, though it isn’t the top-end S-Works model. Maybe to add weight to the bike to bring it up to the UCI’s 6.8kg minimum weight, or perhaps for the Ti saddle rails, Sagan uses the Evo Expert Gel model. 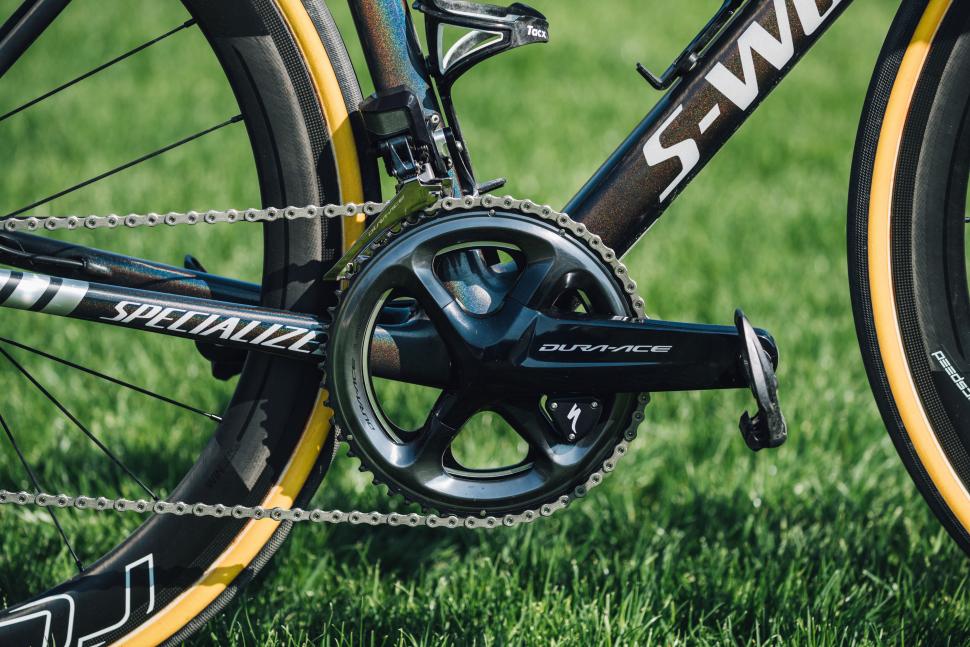 Sagan opts for Shimano’s top-end disc rotors and picks a 160mm for the front with a smaller 140mm at the rear.