What made the Cannondale Topstone Lefty 1 off-road's Benchmark Bike in their Gravel Bike of the Year award? Find out here
by Liam Cahill

This article includes paid promotion on behalf of Cannondale

So we’ve seen a great many gravel bikes over the course of the year and the Cannondale Topstone Carbon Lefty 1 has walked away with off.road.cc’s benchmark bike award: that means it’s our money-no-object winner. We’re going to take a look at what makes it so special.

> off-road.cc's Gravel Bike of the Year

That is, provided you do it right. We’ve spent plenty of time on this bike both on and off-road, and we’d say that Cannondale has got it spot on, pretty much. You have two very different solutions here and we’ll look at the back first. The suspension is a combination of the frame and the seat post. There’s just a single pivot here. So the rear wheel movement is achieved through flex in the stays, and the damping is tuned to the bike’s frame size to give a similar response for different sizes of rider, so smaller riders can feel the benefit too. 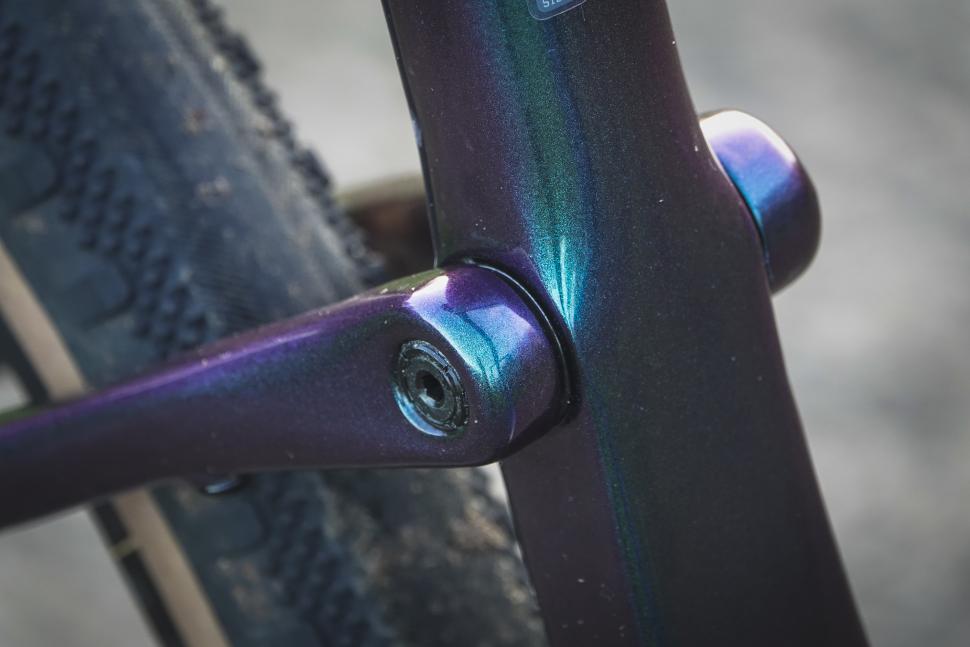 Cannondale claims the system offers up to 30mm of rear-wheel travel.  In terms of a suspension setup, it’s very simple. There are no shocks or linkages here, and because of that, it’s a very lightweight solution. And we’ve found it to be pretty effective on the trails.

You don’t get the same level of tuning or damping control you’d have with a rear shock, but we’re not talking huge amounts of travel here. When you’re riding this Topstone it doesn’t feel like it has rear suspension, it just feels comfortable. There’s no feedback under pedalling and the bike behaves just like a rigid frame under power, really. 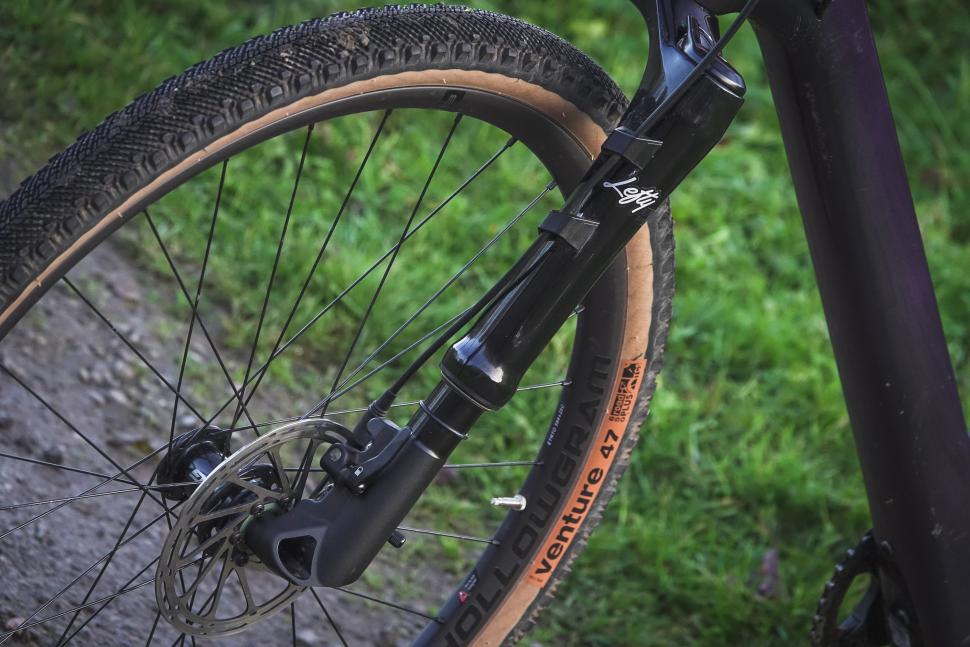 If the suspension at the back is simple enough, the opposite is true at the front. You’re getting a Lefty Oliver fork on this bike which is specifically designed for gravel riding, and like the frame, it offers 30mm of travel.

When most people first try a lefty, they’re convinced it’s not going to work. You’ll spend the first few miles of the ride giving it all your attention, and the rest of the ride giving it none at all. There are no issues with the Lefty not being stiff enough to track effectively, and if you didn’t look at it, you wouldn’t know it was a single-sided fork.

There are advantages: the mud clearance is exceptional, especially on the drive-side. And you can fix a flat without taking your wheel off, which is pretty novel the first time you do it. Until you realise you’re just fixing a flat and that isn’t any fun. 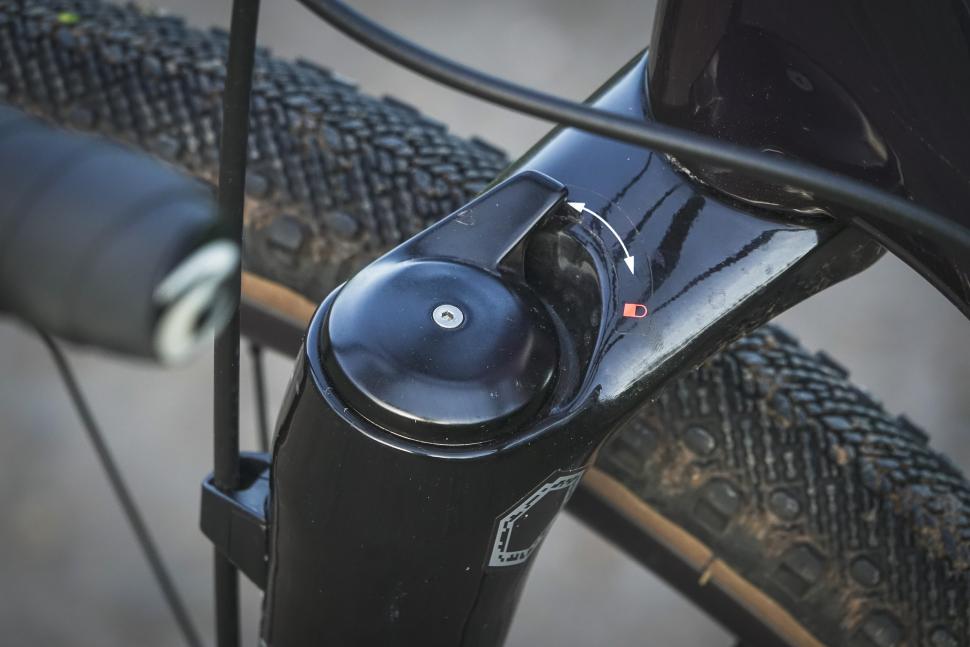 You can also tune the spring pressure and rebound damping to get the feel you want. Getting the pressure right for off-road riding means that on the road you’ll get a bit of wallow when you’re standing on the climbs, but with only 30mm of travel, it’s not really much of an issue. And If you prefer you can lock the fork out on the road using the lever here on the top of the fork leg.

The Topstone is a great all-rounder, it feels really well-balanced. The stack-to-reach ratio of this bike is 1.54 in the size L we have here, and we think that’s just about the sweet spot: you have a position low enough to cover distance at speed but it gives good control off-road too. 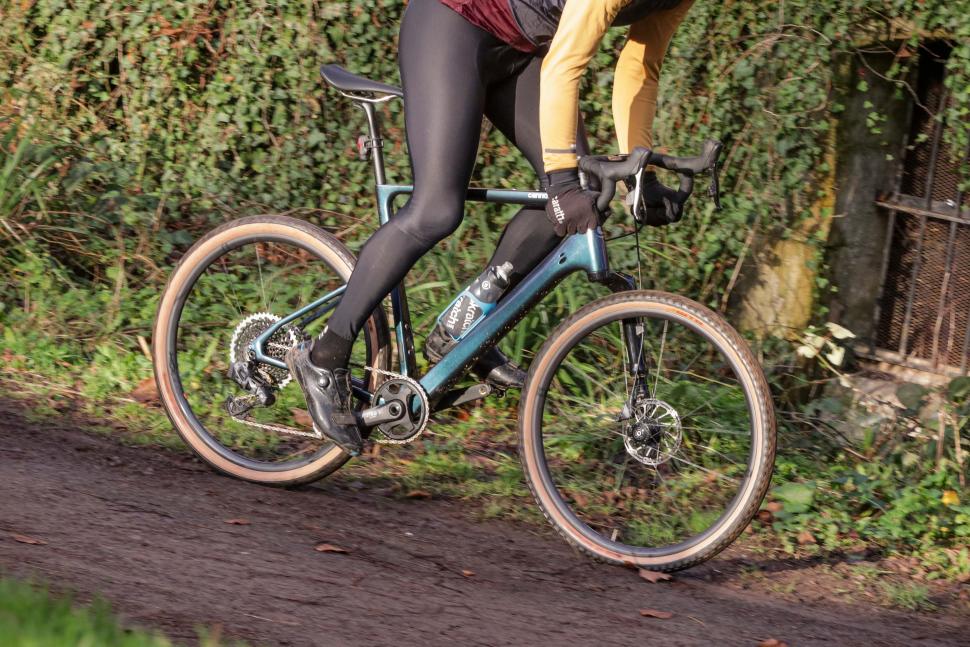 Cannondale has opted for a slightly longer rake on the fork here so that the front wheel sits a bit further forward, that’s something they call Outfront steering geometry. The idea is that the bike is more stable on rougher terrain. It’s hard to say whether it was this that made the difference, but the Cannondale felt at home on the bumpier stuff. Having said that, the bigger chamber tyres and suspension are going to play the biggest part. 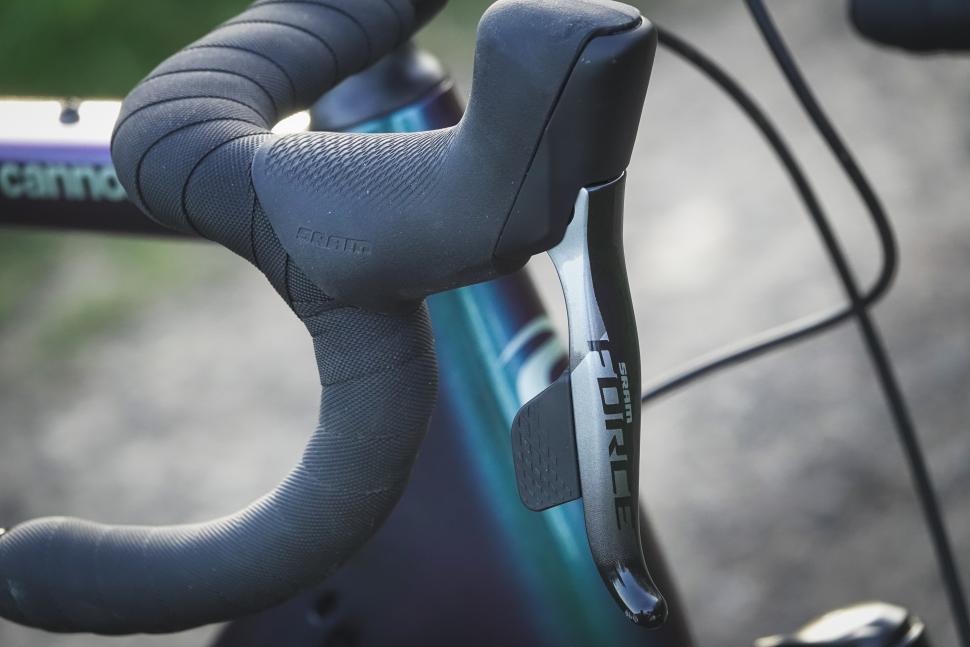 With this sub-10 kilo £6,600 build, you get a mix of the 12-speed X01 Eagle eTap AXS mountain bike groupset and Force AXS road shifters and 40T single ring chainset. It’s top-end gear and all of the road and mountain bike components are designed to work together. 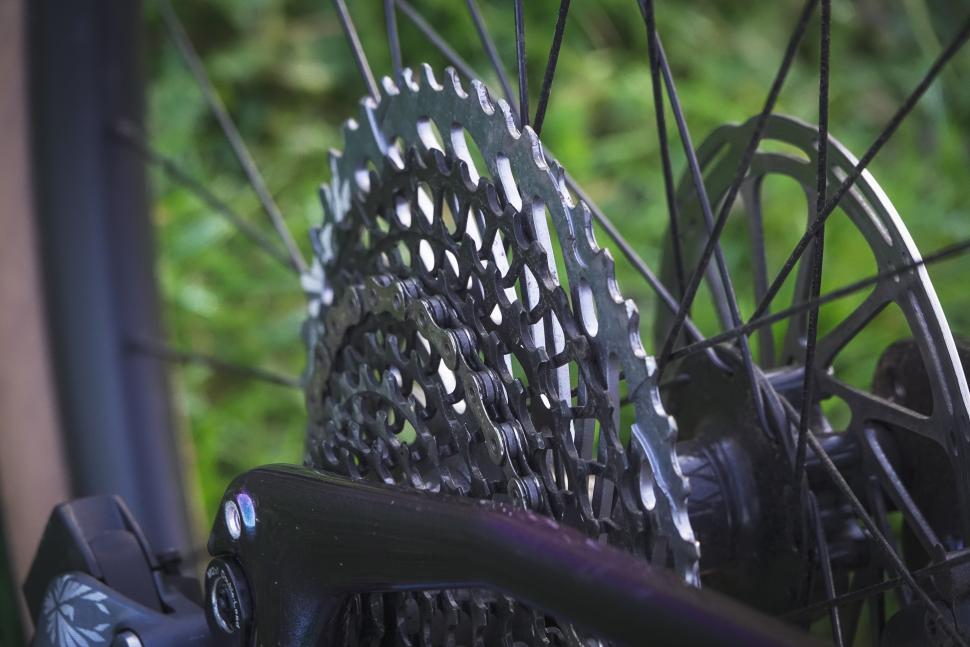 The huge 10-52T cassette at the back gives you a really wide gear range. The top gear isn’t huge, but we’ve been out with mates on road bikes and kept up fine on the fast bits. At the other end, the 40/52 bottom gear is tiny, so it’s great for technical stuff off-road. The trade-off for this amount of range in a 1x system is the gaps between ratios, which are pretty big across the cassette and especially so at either end. Sometimes those gaps felt a bit jarring on the road in a fast group. But on the gravel it was never an issue. You get more occupied with your line and keeping your momentum and optimal cadence is less of a thing. 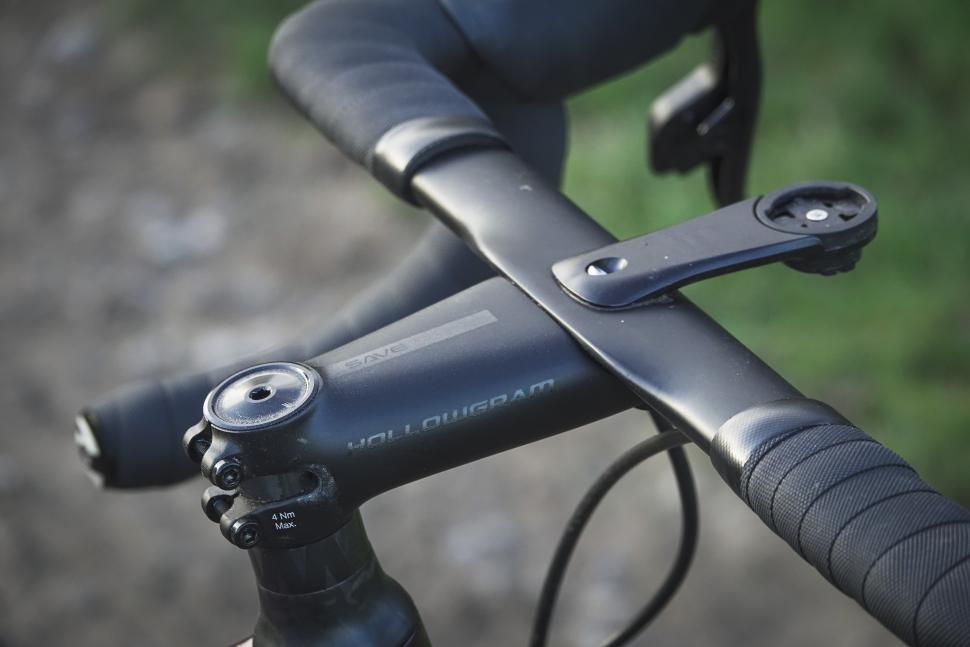 At the front this bike is Cannondale’s HollowGram SAVE SystemBar. The bar and stem are actually separate, but they’re designed to look like a single unit. You get 8° of pitch adjustment, the drop position is fairly shallow, and easily accessible, and there’s a bit of give in the bars too which is great for off-road riding.

There is also an integrated sensor on the back wheel. It automatically records, and it can store up to 30 rides in its on-board memory. It’ll automatically sync with Cannondale’s app, and the app will also tell you when the bike is due a service, based on the miles you’ve logged. Now if you’ve spent over six grand on a bike you’ve probably got a GPS of some sort, but the fuss-free tracking of a single bike’s mileage might be useful to you, and it’s not like you have to remember anything over and above syncing the bike once a month or so. 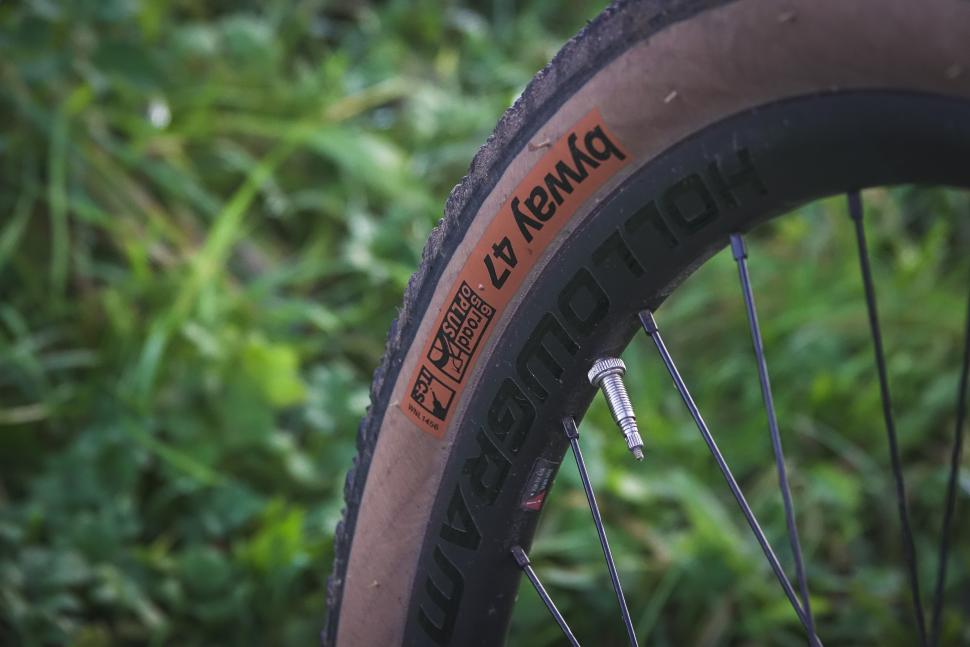 Our only gripe would be the tyres really, they’d probably be great on a dusty summer day but currently, it’s pretty grim out and there’s not a lot of grip in the mud. That’s an easy swap, though. The Hollowgram 23 carbon wheels that they’re mounted on are great though.