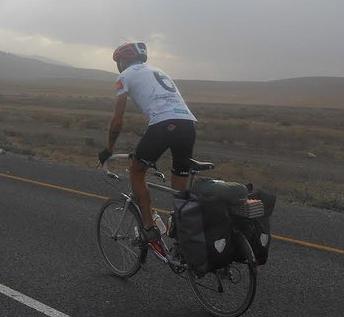 Hugh Thompson on his journey to Rio (Image via www.ride2rio.co.uk)

Being chased by wild dogs has been the most scary incident for football coach Hugh Thompson on his charity cycle to Brazil.

The Newcastle fan, who is currently on the fourth leg of his transcontinental six-part journey, spoke to Sky Tyne and Wear from Malaysia.

“I’ve been knocked off the bike quite a few times and chased by wild dogs in Bulgaria, which was pretty scary,” he told Sky.

Thompson is on a mission, in what he claims is the “last year of his youth”, to raise £20,000 for Tackle Africa: a charity that aims to teach children about the dangers of HIV and AIDS.

On July 6, Thompson set out on the 25,000km journey that will see him cross five continents and visit 25 countries. With six months before the World Cup kicks off in Brazil, the Geordie is on course to complete his journey in time.

On the website, Ride 2 Rio, which is dedicated to Thompson’s expedition, he writes about his motivations for the trip.

“Working with young, unemployed adults, I endlessly preached that anything was possible and with the right attitude you could achieve anything in life,” Thompson said. “So with that I felt it was about time I stepped up and practiced what I preached.

“At 29, a year left of my youth, the idea of cycling round the world to Rio in time for the 2014 World Cup to raise money for a great charity was the perfect opportunity.”

The football fan's high hopes for the charity work and fundraising he has undertaken, are not reflected in his predictions for England's chances once he reaches Brazil.

He said: “I’ll probably watch England get knocked out at the first round!"

Thompson finished his interview with Sky by expressing his hope that donations keep coming in.

He said: “I just really want to push to try and get that money and build some momentum leading up to Rio.”