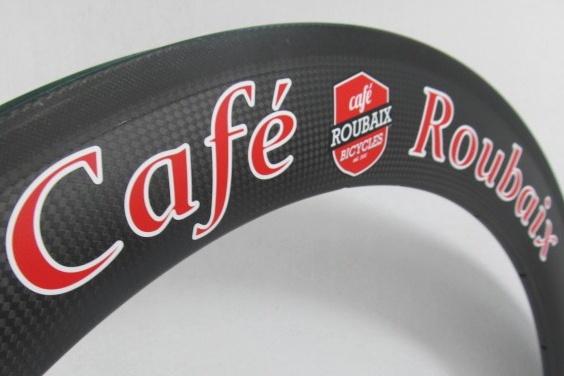 Social media users attack US brand's stance against war vet trading as Café Roubaix - but it says it has to protect trademark or lose it...
by Simon_MacMichael

California-based bicycle manufacturer Specialized is facing a wave of criticism on social media after it emerged that the company has threatened a war veteran in Canada who set up a bike shop called Café Roubaix with legal action for using ‘Roubaix’ in the name. But the company insists that under intellectual property law, it has to protect the trademark – or lose it.

The shop, opened in March this year in Cochrane, Alberta, belongs to Dan Richter, who has been battling with post-traumatic stress disorder (PTSD) since returning from a tour of duty with the Canadian armed forces in Afghanistan, reports the Calgary Herald.

Richter, who also produces carbon wheels that beat the Café Roubaix name, says he chose the name of his shop in honour of one of cycling’s most iconic sites. The ‘Queen of the Classics,’ Paris-Roubaix, was first held in 1896 to help publicise the new velodrome in the town in northern France that still hosts the finish of the race.

But since 1992, Roubaix has also been a trademark, initially filed in the United States by Toshoku America, a company that at the time was associated with Fuji bicycles.

According to BikeBiz, when the trademark was registered, a trademark attorney noted: "It is unlikely that a significant number of the American population would know that Roubaix, France is the location of a well-known annual bicycle race."

The trademark, which applies to “Bicycles, bicycle frames, and bicycle components, namely bicycle handlebars, bicycle front fork, and bicycle tires,” has been used under licence in the United States since 2007 by Specialized, which has also filed for trademark protection in its own right elsewhere, including Canada.

Founded in California in 1974 by Mike Sinyard and now 49 per cent owned by Taiwanese bicycle manufacturer Merida, Specialized has an estimated turnover of around half a billion dollars annually.

Reaction to the news of the threats of legal action against the owner of a fledgling business has unsurprisingly led to accusations of bullying being levelled against the company and appeals to it to make an exception in this case, as well as calls for a boycott of its products.

A number of Twitter users have changed their names on the social network to incorporate ‘Roubaix’ and a search on the word reveals the strength of feeling surrounding the issue.

Specialized is also taking a lot of flak on its Facebook page over the issue. One user, Perry Davidson, has attracted more than 400 ‘likes’ for the following comment posted on the bike manufacturer’s page which alludes to its logo:

Dear Specialized, I represent the letter "S" and as such I am alerting you of the need for you to immediately cease and desist using that letter "S". A simple search of the alphabet would have prevented this, but you have used the letter with impunity and the letter "S" is certain that, if it does not defend its right to ownership, everyone will feel some right to use what many people feel is just a letter of the alphabet. Thank you.

But on the issue of Café Roubaix, Specialized insist their hands are tied and the way trademark law works means that they have no room for discretion on the issue.

Larry Koury, Specialized Canada’s managing director, explained to the Calgary Herald that since the word ‘Roubaix’ is registered to the brand on the Canadian government’s trademark database, "A simple trademark search would have prevented this.”

He added: “We are required to defend or lose our trademark registration" – in other words, if they do not take steps to protect its trademark, they would no longer have exclusive rights to it.

As BikeBiz notes, it’s possible that the company’s objections are related to the wheels produced by Richter that carry the Café Roubaix name, rather than the name of the shop, which sells high-end bikes and components and aims to have an Italian feel. Specialized is not one of the brands stocked.

“It’s been frustrating,” Richter told the Calgary Herald. “The response throughout this process [from Specialized] has been arrogant and almost unbelievably dismissive.

“We didn’t want to go public… but they’ve made it clear on no uncertain terms, they are going to sue.”

He pointed out that among his target customers, Roubaix would be synonymous with the race that finishes there.

“I understand the need for the protection of intellectual property, but this is named after a city known worldwide for this race,” he explained.

“For our customer base, there’s an appeal [in the name Roubaix]. Our market understands that race, and it reflects what we want to provide for them.”

Richter says his lawyer believes that he has a strong case, but he cannot afford to contest the case, with legal fees to fight Specialized in the courts estimated to be at least C$150,000 (£86,000); as a result, he says he has no option but to acquiesce to Specialized’s demands.

A crowd-funding campaign has been set up on Indiegogo to help raise money to meet the costs of those legal fees, but at the time of writing stands at just $532 – some people who might otherwise have contributed perhaps deterred from doing so by the experience of donors to the Paul Kimmage Defense Fund.

Assuming he cannot fight the threatened action from Specialized, Richter will have to go through the time-consuming process of changing his store’s name and branding.

It also means much of his effort that has gone into building his business to date will have gone wasted – although paradoxically, whichever name the shop bears in future, it could certainly be argued that since the story went viral, Richter is benefiting from an undreamt of level of publicity for his business.

“I’ve gone through some very intense therapy in the last year,” said Richter, referring to his treatment for PTSD.

“Forcing myself to get out there into the public and the business world has taken a huge effort,” he added.

“I’m just at the point were we think this might fly, so this was a huge hit for me personally.”

In a forum thread on road.cc that links to the Calgary Herald article, the widespread feeling among those posting is that Specialized is being far too heavy-handed on the issue and could display some flexibility, one pointing out that the parties could draw up a trademark coexistence agreement, allowing both to use the word ‘Roubaix’ in specific areas.

Specialized has faced accusations of bullying in the past, including in relation to a legal action launched in 2010 against former employees Robert Choi and Barley Forsman, which it accused of stealing its designs when founding their new company, Volagi.

Earlier this year, a court in California dismissed most of Specialized’s claim, including that of intellectual property theft over Volagi's LongBow Flex frame design, which the new company had patented.

The case for breach of contract against Forsman was also dismissed, although Choi was found to have breached his with the court establishing that he had started planning the competing company while still working at Specialized.

A jury awarded Specialized a token one dollar in damages; the combined legal fees of both sides were estimated at nearly $2 million (£1.2 million).

Besides– for the time being at least – a bike shop in Canada, there is also a Romania-based website, caferoubaix.com, that shares the name.