We get aboard a £750 aluminium road bike in a largely Shimano 105 spec - sounds like a bargain? It is
by Mat Brett

B’Twin’s Alur is a new road bike that offers what looks to be outstanding value for money. £750 gets you a triple-butted aluminium frame, a carbon bladed fork, and a Shimano 105-based spec. We had the chance to take it for a spin…

We showed you the 2014 B’Twin range back in the autumn and we’ve ridden each of the key road bikes now, including the top-level Ultra. The Alur is an altogether different beast but, like the Ultra, it offers excellent value for money. B’Twin see this as a tough endurance bike and I’d agree with that assessment.

Why ‘endurance’? Well, the Alur has a geometry that’s slightly more relaxed than that of either the Ultra or the mid-level Mach, so you get a ride position that’s a touch higher, putting less strain on your back. It’s designed to be just that little bit more comfortable for racking up a high mileage. 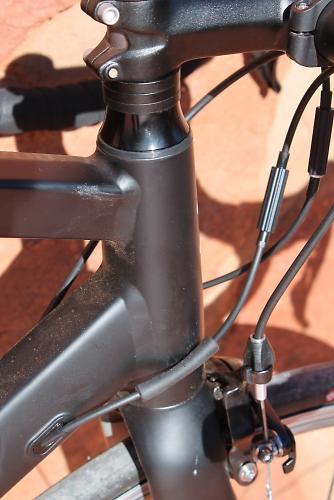 It’s still very much a genuine road bike geometry. The large model, for example, (statistics alert!) comes with a 564mm top tube and a 177.5mm head tube. For comparison, there’s a Mach model (57cm) with an almost-the-same top tube length (565mm) that has a head tube that’s 13.5mm shorter. It’s not the biggest difference ever but you get the idea that the Alur’s front end is just a bit higher. It’s hardly lofty, though. You don’t climb aboard the Alur and feel like your upper body is hitting the wind full-on. You can still get into a decent tuck position on the drops when you want to turn up the speed.

The Alur’s Evo Vario frame is made from 6061 hydroformed aluminium that’s triple butted and heat treated. Triple butting, as you probably know, means that B’Twin vary the tubes’ wall thicknesses to keep the weight down while maintaining high strength in the areas where it’s most needed. The Alur’s frame is fairly angular with almost-square edges to many of the tubes. Visually, all those straight lines might float your boat or they might not; that’s going to be a matter of personal taste. Although the Mach and Ultra carbon-framed bikes look very different, they’re also sharp edged and recognisably of a type. 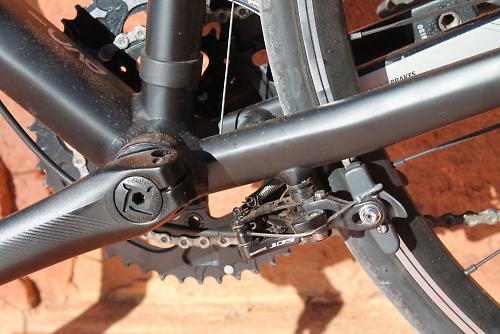 Out back, the chainstays are oversized for stiffness too and, unusually on a bike of this price, they’re home to a Shimano 105 direct mount brake. The idea of the positioning is to reduce drag. It also means, of course, that B’Twin don’t need to use a brake bridge between the seatstays… so they don’t. Instead, they’ve just added some reinforcement between the stays right up by the top tube junction. All of the cabling is internal, the rear mech cable emerging right by the dropout, and the Alur is electric-shift compatible if you want to go down the Shimano Di2 or Campagnolo EPS route in the future. 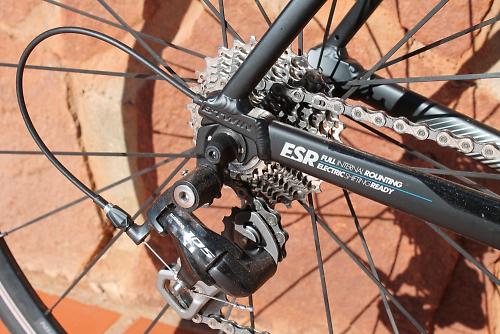 Oh, and guess what: the frame is UCI approved. That means that you can race it at any level you like (right up to UCI sanctioned races), it conforms to all the rules and regs. Of course, that’s more of a marketing thing than anything else (and an income generator for the UCI) – you’re not going to see this bike in the Tour de France – but it’s still pretty cool. This is the most affordable bike we can think of with that UCI sticker on the seat tube (feel free to let us know if there are any cheaper ones). 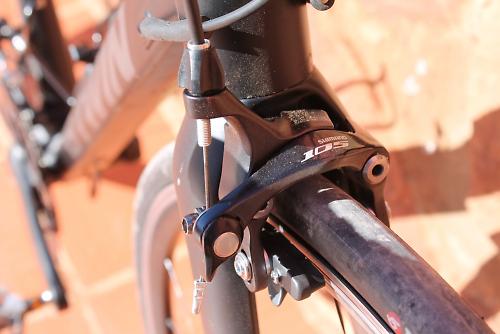 The fork is B’Twin’s own Evo Vario design with carbon legs and an alloy steerer, and the front brake attached to it, like the rear one, is direct mount.

An aluminium frame will struggle to match carbon fibre on the scales (although some are right in the mix), but the Alur’s frame weight (size medium) is 1,400g, according to B’Twin. The fork is around 550g. Okay, that’s not mega light compared to some of the high-end finery we test here on road.cc, but this is a 750 quid bike. The fully built up Alur 700, again in a medium, hits the scales at around 8.9kg (19.6lb). As I said up top, the Alur comes in a largely 105 build – that’s Shimano’s third tier road group, sitting below Dura-Ace and Ultegra. That’s a very high-level spec on a bike of this price. As well as those direct-mount brakes, the shifters and both mechs are 105 while the cassette is next-level-down Tiagra. The only major deviation is the chainset which is a compact (50/34-tooth) B’Twin branded option. Still, it’s a lightweight alternative.

Most of the other components are B’Twin’s own too, including the wheels with their 28mm-deep rims and sealed bearing hubs. They weigh in at 1,790g the pair, which is more than reasonable for the money. You even get clipless pedals as part of the package.

The Alur 700 rides like a bike that’s considerably more expensive than it actually is. If someone told you that this was a £1,000 or even a £1,200 bike, you’d think that was fair enough. Easily. It just doesn’t feel like you’re having to make too many compromises here.

Say ‘aluminium’ to many people and they’ll automatically assume that the ride is harsh. That’s plain wrong. The Alur is actually a pretty comfortable bike. For a start, if you want a slightly more relaxed ride position than you get on a traditional road bike, that’s what’s on offer here. Chances are that you ride most of the time with your hands resting on the hoods, but when you do want to hunker down, B’Twin’s compact aluminium bar offers a couple of comfortable hand positions on the drops. Plus, both the frame and the fork do a good job of filtering out vibration and chatter from uneven roads. Admittedly, I only had a couple of hours on board the Alur so I can’t tell you how it would feel at the end of a long day in the saddle, but the ride quality is certainly a long way from harsh. For what it’s worth, I got on well with B’Twin’s Comp saddle too. Saddles are very much a matter of personal taste but B’Twin haven’t made the mistake of going large and squishy here as so many manufacturers do on more affordable bikes; this is a slim option with enough flex in the shell to take the sting out of bigger hits.

Sling a load of power through the cranks and you do get a little flex in the frame around the bottom bracket, but not loads – it’s still reasonably stiff. Here at road.cc we’re used to reviewing super-rigid bikes aimed at very strong cyclists, and the Alur’s frame stiffness does fall a little short in comparison, but then, it’s much cheaper than most of those. At lower price points it’s always going to be a balancing act between weight and frame stiffness, and B’Twin hit a good compromise here. Plus – and I hope this sounds realistic rather than patronising – most people thinking of buying this bike won’t be putting a Fabian Cancellara level of power through the drivetrain. Good front-end stiffness means that the steering is pretty accurate too, and those direct-mount brakes do make a difference on the descents. I'm a fan. There’s certainly not a lot of flex in them because the arms are mounted straight onto the frame/fork rather than via a skinny pivot. Direct-mount brakes just feel a bit more… direct.

Riding the Alur 700, you have to keep reminding yourself that this is a £750 bike. I’m struggling to think of another bike at this price that offers as much. Yes, as I mentioned, I only got a couple of hours in here and long-term tests can sometimes reveal other issues, but first impressions are very promising indeed. I think B’Twin are onto a winner here.

The Alur 700 will be available through Decathlon from March. It’s already listed on B’Twin’s website if you’d like to take a look.