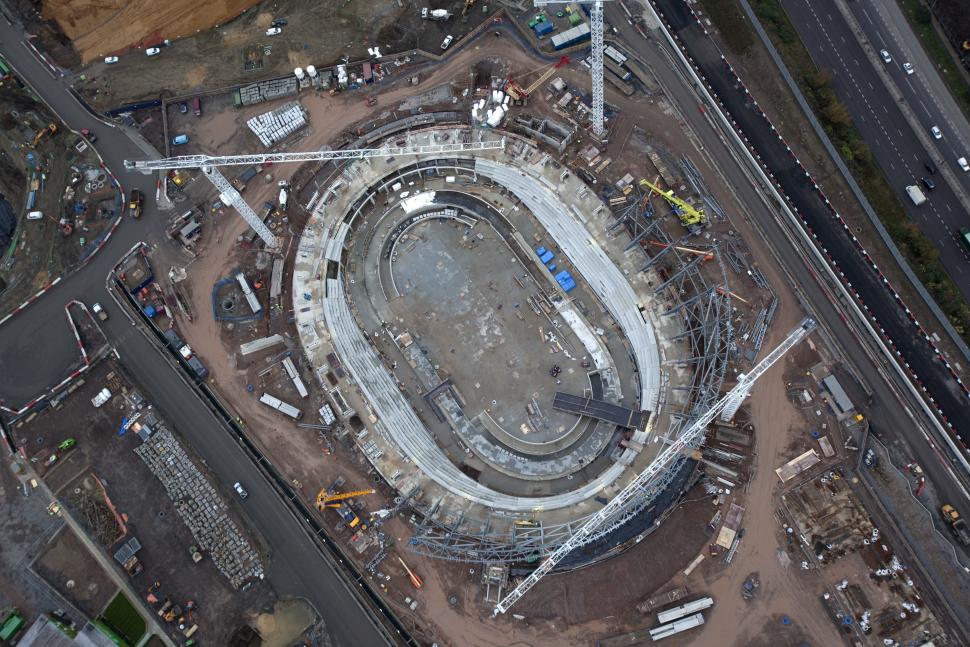 With less than 1,000 days to go before the Olympic flame is lit above London on 27 July 2012, new aerial photos show that the Velodrome where Team GB’s track cyclists and para-cyclists will be aiming to repeat their Beijing success is taking shape.

The fixing of the steelwork that will form the Veledrome’s distinctive double-curved design of the Velodrome is now almost halfway completed.

And it doesn’t take too much imagination to fill in the blanks and visualise the event itself – the wooden track, sell-out crowd, and team members and media occupying the centre of the arena – that will be televised to millions of spectators worldwide in less than three years’ time.

The Velodrome is one of the so-called ‘Big Five’ venues that will occupy the Olympic Park in Stratford, the others being the Olympic Stadium itself, the Aquatics Centre, the Village and the Media & Broadcast Centre, known as the IBC/MPC.

New images of all five have been released today by the Olympic Delivery Authority (ODA) to show that construction is on track as the International Olympic Committee’s Coordination Commission visits London for an update on progress.

ODA Chairman, John Armitt, said: “With construction work on the Olympic Park approaching its peak, the ‘Big Five’ venues are already becoming landmarks on the east London skyline and show how much progress has been made since the IOC Coordination Commission visited earlier this year.

“The external structure of the Olympic Stadium has been finished and the completion of the Aquatics Centre roof gives us an exciting glimpse of what will become the ‘Gateway to the Games’ and the Olympic Park’s most iconic venue. Work is also racing ahead in the north of the Park with the first residential plot of the Village structurally complete, the huge frame of the IBC/MPC in place and the striking architecture of the Velodrome taking shape.”

Acknowledging the scale of the task that still lies ahead, he said: “The Olympic Park ’big build’ is firmly on track but we are not complacent and these new images show the sheer scale of the project and the challenges ahead as we enter our toughest year in the project.”

Sebastian Coe, Chairman of the London 2012 Organising Committee, believed that the new photos demonstrated the impact that the Olympics were having in revitalising what had been a run-down part of the capital.

“In a little under 1,000 days time, the eyes of the world will fall upon this part of east London,” he explained. “The area is being transformed, creating new communities, new housing, and state-of-the-art sporting facilities. It is abundantly clear from these photographs that this piece of regeneration is well under way.”

Meanwhile, a new fly-through of the Olympic Park, narrated by former triple jumper Jonathan Edwards, can be watched online at the 2012 website.